AIM: To determine the rate of use and non-use of prophylactic percutaneous endoscopic gastrostomy (PEG) tubes among patients with head and neck cancer (HNC) patients.

METHODS: All patients with HNC undergoing PEG between January 1, 2004 and June 30, 2006 were identified. Patients (or their next-of-kin) were surveyed by phone and all available medical records and cancer registry data were reviewed. Prophylactic PEG was defined as placement in the absence of dysphagia and prior to radiation or chemoradiation. Each patient with a prophylactic PEG was assessed for cancer diagnosis, type of therapy, PEG use, and complications related to PEG.

CONCLUSION: There is a high rate of unnecessary PEG placement when done prophylactically in patients with head and neck cancer.

Significant weight loss and resultant malnutrition in patients undergoing radiation and or chemotherapy for head and neck cancer (HNC) are recognized clinical concerns[1]. Impaired swallowing function may be further compromised by odynophagia resulting from therapy induced mucosal injury of the pharynx and esophagus. Morbidity related to poor nutrititional intake during treatment may include dehydration, hospitalization, compromised treatment compliance, reduced quality of life and the potential for a negative impact on survival[2]. Multiple interventions have been implemented to help ameliorate the impact of cytoreductive therapy on weight loss and nutritional status, including the use of percutaneous endoscopic gastrostomy (PEG) tube. Published studies suggest that HNC patients undergoing radiation and/or chemotherapy may benefit from prophylactic placement of PEG tubes[3-9]. In our institution, many patients with newly diagnosed HNC scheduled to receive radiation and/or chemotherapy are offered a PEG tube before the start of treatment regardless of whether they have significant dysphagia. This practice is primarily in patients who are treated with combination chemotherapy and radiation based on the impression that there is added pharyngeal toxicity with this regimen.

We have observed anecdotally that a number of our HNC patients who received a prophylactic PEG tube in fact never used them. We performed a retrospective database study of all patients in whom PEG tube was placed for HNC to determine the prevalence of unused prophylactically placed PEG tubes. Data were also analyzed for possible factors predictive of unused PEGs or PEGs used for less than 2 wk.

We performed a retrospective review of a prospectively maintained endoscopic database to identify all patients with HNC undergoing PEG between January 1, 2004 and June 30, 2006 at both the Oklahoma City Veteran Affairs and Oklahoma University Medical Center hospitals. Patients were surveyed by phone and all available medical records and cancer registry data were reviewed. If the patient was deceased, his or her next of kin was interviewed. Prophylactic PEG was defined as placement in the absence of dysphagia and prior to radiation or chemoradiation. A PEG was deemed definitely prophylactic if the patient’s medical record was suggestive of prophylactic PEG placement and the patient confirmed a lack of preprocedure symptoms by telephone survey. Possible prophylactic was defined as being when the patient’s medical record indicated prophylactic PEG tube but the patient could not be contacted to confirm. Patients with definitely prophylactic PEG were assessed for: cancer diagnosis, type of therapy (radiation alone, chemoradiation, with or without surgery), whether the PEG was ever used, duration and extent of PEG use, and complications related to PEG. Patient demographics, including age, sex, and body mass index (BMI), were also recorded. Specific diagnoses and treatment modalities were examined for a correlation with PEG use vs non-use or limited use. For statistical purposes patients were grouped as early (Stage I or II) or late (Stage III or IV) HNC according to the American Joint Committee on Cancer stage grouping for HNC[10]. HNC was defined as any malignant tumor involving the lips, any region of the oral cavity, tongue, soft palate, pharyngeal wall, pyriform sinuses, supraglottic larynx, glottic larynx (true vocal cords and the mucosa of the anterior and posterior commissures) and subglottic larynx (extends to the inferior border of the cricoid cartilage).

Frequency and percentage of use (none or limited) by clinical parameters (tumor site, stage) or treatment modality (radiation, chemoradiation, surgery) are reported and graphically represented using bar charts. Fisher’s exact test was employed to test for an association between nonuse of PEG and each variable.

One hundred and fifty three patients underwent PEG placement for HNC during the pre-specified period of time; of those, 50 patients were excluded because initial review of medical records revealed they did not meet the criteria for prophylactic PEG tube (Figure 1). Of the remaining 103 patients, 34 patients (33%) could not be contacted for follow-up. Chart review revealed that 5/34 patients not contacted likely had undergone prophylactic PEG. Of the 69 patients with available survey data it was established that 23 (22.3%) patients (19 males; 4 females; mean age 58 years) had definitely undergone prophylactic PEG. Ten patients (43.5%) had stage III HNC; seven patients (40.4%) had stage IV HNC. Fifty two percent (12/23) were classified as oropharyngeal; 39.1% (9/23) were classified as laryngeal cancer, and one case was nasopharyngeal cancer. The treatment regimens of all patients are outlined in Table 1. All patients received various combinations of radiation, chemotherapy, and surgery. Four patients (17.4%) received radiation as the only treatment. Ten patients (43.5%) underwent surgical resection. Of these, 9 (90%) received preoperative radiotherapy and or chemoradiotherapy and one received chemoradiotherapy post operatively. Patients not using the PEG relied entirely on oral intake but the use of nutritional supplements could not be assessed (Table 1). 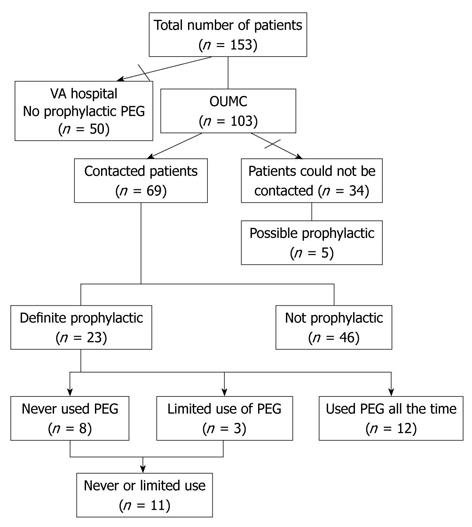 Of the 23 patients who underwent prophylactic PEG, 8 (34.7%) never used their PEG for feeding, and 3/23 (13%) used it for less than 2 wk. No association with PEG use vs non-use was observed for cancer diagnosis, stage, or specific cancer treatment (Figure 2).

Another rare but potential complication specific to this indication for PEG is metastasis of the primary tumor to the gastrostomy site, which has been described in multiple case reports[16]. The balance between these risks and the potential benefits must be weighed. Overall quality of life should be considered. One study demonstrated that PEG placement prevented deterioration of the quality of life index during radiation therapy[17]. On the other hand, a recent study was done to evaluate the impact of clinical predictors and other influences on long-term quality of life in patient with HNC, and found that patients with gastrostomy tubes had lower quality of life scores relative to patients without a PEG (P < 0.001)[18]. There has been no study done to evaluate the effect of prophylactic PEG tube in overall survival. Likewise the cost-effectiveness of this approach is undefined.

Limitations of our study include the inherent bias of retrospective studies in general, and the fact that one third of our patients were not available for phone survey yielding a small sample size. The study is a retrospective observational analysis on the use rates in patients with prophylactic tubes; hence temporally accurate nutritional parameters were not reliably available. There were a small number of patients with a possibly prophylactic PEG, but we choose to focus the analysis on patients that were definitely prophylactic. Inclusion of those five additional patients did not significantly alter the use rate or the overall conclusion.

Currently, there are no practice guidelines for patient selection regarding prophylactic PEG tube placement exist. Clinical judgment, in addition to patient and family preference, most commonly guides the decision on an individual basis and may vary greatly based on the practice setting.

In our study we determined that a significant number of patients (47%) never used their PEG or used it for less than 2 wk. However, those patients who used it for more than 2 wk uniformly reported that PEG tube had critical impact on their nutritional status and “they would not have survived without it”. Prophylactic PEG placement may be unwarranted in some patients but the selection of patients needs to be better defined to prevent unnecessary risk exposure. In our study there were no clear disease or treatment parameters predictive of PEG use vs non-use. The high rate of non-use or limited use and the inherent risk of complications related to PEG call this practice into question and require careful consideration by the referring physician. It also prompts the need for a large prospective study to better define the patients group most likely to require use of enteral feeds during their therapy.

In summary, our study suggests prophylactic PEG placement prior to HNC therapy is associated with a high rate of non use or limited use. Further prospective studies evaluating specific selection criteria for prophylactic PEG in this setting are needed. Similarly, additional studies are needed to assess the impact of prophylactic PEG tube placement on the cost-effectiveness of cancer care, quality of life, hospital admission rate, and, most importantly, survival.

Impairment of oral intake occurs in the majority of patients with head and neck cancer (HNC) receiving chemoradiotherapy. Placement of prophylactic percutaneous endoscopic gastrostomy (PEG) tube in asymptomatic newly diagnosed HNC before chemoradiation is a common practice in some centers. In some studies PEG has been associated with a decrease in treatment related weight loss in patients with HNC, but no studies have examined the utilization rate. PEG placement is an invasive procedure, with possible complications. The authors anecdotally noticed a finite rate of non use of prophylactic PEG tubes among those patients.

This is the first study that addressed the issue of use of prophylactic PEG in HNC patients. The result of this study showed that a significant number of patients (47%) with prophylactic PEG tubes never used their PEG or used it for less than 2 wk. No association with PEG use vs non-use was observed for cancer diagnosis, stage, or specific cancer treatment.

Prophylactic PEG placement may be unwarranted in some patients but the selection of patients needs to be better defined to prevent unnecessary risk exposure.

This is a well-written retrospective study, and it is important to realize that prophylactic PEG placement has its side effects.