METHODS: We enrolled 120 patients (57 male and 63 female) aged 1-14 years old (median: 4.7 years) with functional constipation from 13 hospitals and two private clinics. All patients fulfilled the Rome III criteria for functional constipation and were treated with daily oral magnesium oxide for at least 1 mo. The median treatment dose was 600 (500-800) mg/d. Patients were assessed by an interview and laboratory examination to determine possible hypermagnesemia. Serum magnesium concentration was also measured in sex- and age-matched control subjects (n = 38).

Magnesium-containing cathartics are used worldwide to treat chronic constipation[1-3]. Approximately 45 million Japanese patients are estimated to undergo treatment with magnesium oxide as an antacid or cathartic annually[4]. Many children with functional constipation are taking these drugs for long periods of time; sometimes over several years.

Hypermagnesemia is a rare clinical condition[5,6]. Most cases are iatrogenic and due to increased intake of magnesium, which occurs after intravenous administration of magnesium[7,8] or oral ingestion of high doses of magnesium-containing antacids or cathartics[9-12]. Magnesium homeostasis is dependent mainly on gastrointestinal absorption and renal excretion. The kidney is the principal organ involved in magnesium regulation. Renal magnesium excretion is very efficient, because the thick ascending limb of Henle has the capacity to reject completely magnesium reabsorption under conditions of hypermagnesemia[5,6], and therefore, hypermagnesemia commonly arises in patients with renal dysfunction.

In 2008, the Ministry of Health, Labour and Welfare (MHLW) of Japan reported 15 adult patients with hypermagnesemia, including two cases of death due to oral ingestion of magnesium oxide from April 2005 to August 2008[4]. Although most of these elderly patients with constipation had dementia, schizophrenia, or renal dysfunction, the MHLW has recommended measuring the serum level of magnesium in patients who regularly use magnesium oxide.

We enrolled 120 patients (57 male and 63 female) aged 1-14 years with functional constipation from 13 hospitals and two private clinics in Japan. At entry, all patients fulfilled the Rome III criteria for functional constipation, which meant that they had at least two of the following characteristics: fewer than three bowel movements weekly; more than one episode of fecal incontinence weekly; large stools in the rectum shown by digital rectal examination or palpable on abdominal examination; occasional passage of large stools; retentive posturing and withholding behavior; and painful defecation. All patients had been treated for at least 1 mo with daily magnesium oxide as an oral laxative. The medication was given once daily or in split doses. The dose was dependent on the patient’s condition.

Serum magnesium concentrations were also measured in the control group which comprised 38 children (24 male and 14 female) aged 1-15 years who visited the Department of Pediatrics at Gunma University Hospital, and were without any history of hematological disease, tumor, heart failure, metabolic or endocrine diseases, renal dysfunction, or severe neurological disability. None of these children were treated with magnesium oxide.

Laboratory values, duration of treatment, and daily dose of magnesium oxide are shown as the median and interquartile ranges. Statistical significance of differences was tested by χ2 test or Mann-Whitney U test, as appropriate. Spearman’s rank correlation coefficients were calculated for the correlation between the serum level of magnesium and age, duration of treatment, and drug dose. P < 0.05 was regarded as significant. All analyses were carried out using SPSS for Windows (SPSS statistics 17.0).

Subject characteristics and serum magnesium concentrations are shown in Table 1. In the constipation group, the median treatment duration with magnesium oxide was 1.3 (0.4-2.6) years and median daily dose was 600 (500-800) mg/d; 33 (25-45) mg/kg per day. After administration of magnesium oxide, the outcome of constipation was investigated in 83 patients. Bowel habits in all patients were improved, and 75% of patients were stable. However, 11% of children had fewer than three bowel movements weekly, 28% of them had withholding behavior, and 34% had painful defecation during the follow-up period. None of the patients still had overflow-incontinence.

Serum magnesium concentration in the constipation group decreased significantly with age (P < 0.01) (Figure 1A). There was no significant correlation between the serum level of magnesium and duration of treatment (Figure 1B). The treatment dose had no effect on serum magnesium level (Figure 1C). 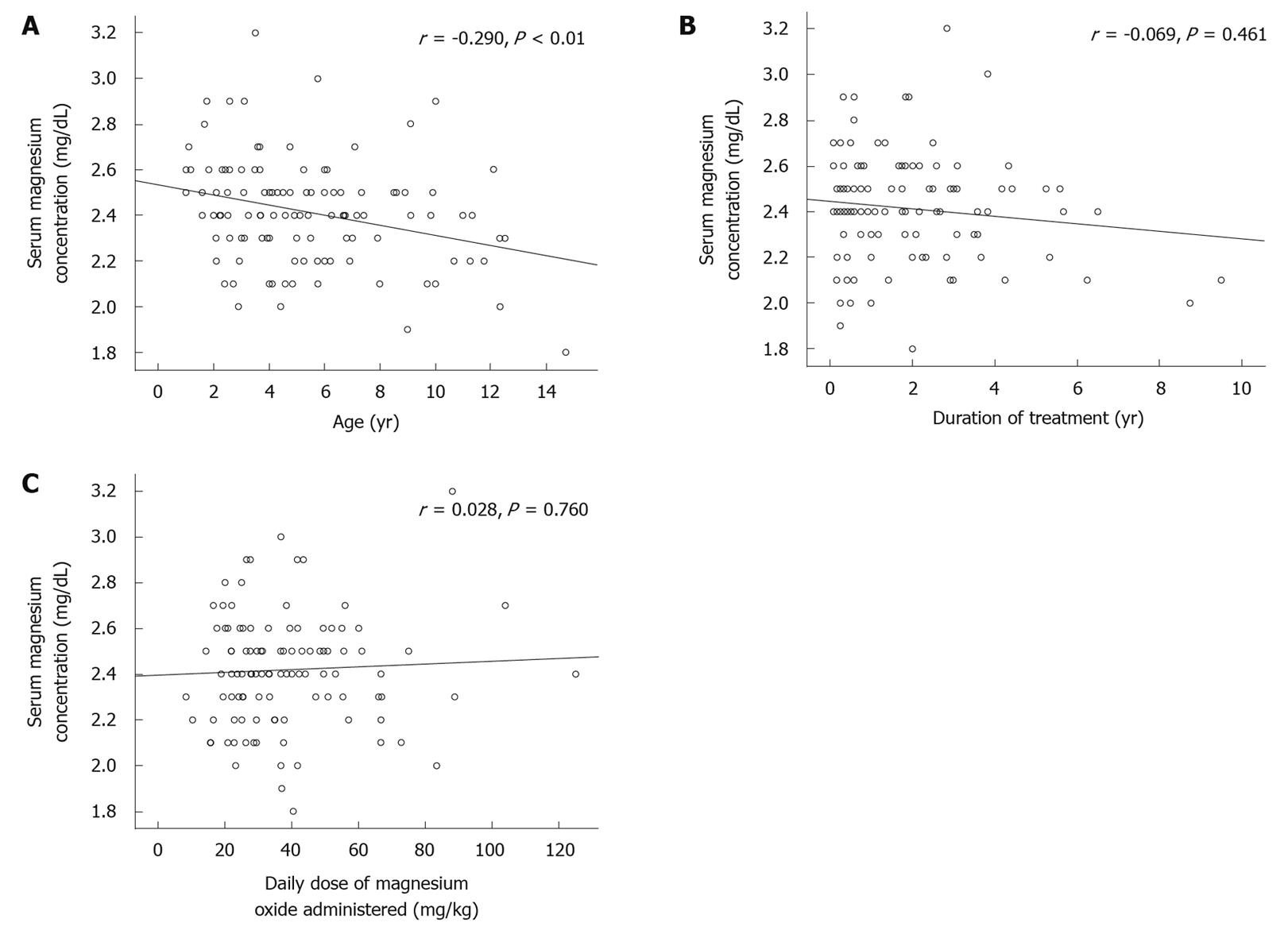 In 2008, the MHLW of Japan reported that 15 patients aged 32-98 years (median, 71 years) who had been treated with magnesium oxide developed severe side effects of magnesium toxicity, such as hypotension, bradycardia, electrocardiographic changes (atrial fibrillation), loss of consciousness, coma, respiratory depression, and cardiac arrest. The serum magnesium concentration in two fatal cases was 20.0 mg/dL and 17.0 mg/dL. As a result of these reported cases, the MHLW has recommended that the serum concentration of magnesium in subjects on continuous magnesium therapy should be determined[4].

Several cases of hypermagnesemia from enteral magnesium intake in patients with normal renal function have been reported previously[14-17]. It is known that non-renal risk factors for hypermagnesemia are age, gastrointestinal tract disease, and administration of concomitant medications, particularly those with anticholinergic and narcotic effects[18]. Five elderly Japanese patients without renal dysfunction had intestinal necrosis, severe constipation, and abnormal abdominal distention with intestinal expansion, and these abdominal risk factors could have increased the serum concentration of magnesium.

Hypermagnesemia has also been reported in pediatric practice[14,19]. These case reports include a 14-year-old girl without renal dysfunction who was taking magnesium hydroxide because of severe constipation[14], and a 2-year-old boy with neurological impairments who was taking 2400 mg/d of magnesium oxide administered as part of a regimen of megavitamin and megamineral therapy[19]. These cases developed increased serum magnesium levels as high as 14.9 mg/dL and 20.3 mg/dL, respectively.

In our study, serum magnesium level in constipated children treated with magnesium oxide, but not in the control children, decreased significantly with age. No correlation was found between duration of treatment or daily dose of magnesium oxide and serum magnesium concentration. These data are consistent with those reported by Woodard et al[21] They reported that the increase in serum magnesium concentration in 102 adults who received multiple doses of magnesium citrate did not correlate with the quantity of magnesium administered[21]. Elderly patients are at risk of magnesium toxicity as kidney function declines with age, but it is not clear whether young children have a higher risk of hypermagnesemia. Alison et al[22] reported on a 6-week-old infant who had increased serum magnesium level (14.2 mg/dL) and life-threatening apnea due to 733 mg/d magnesium hydroxide that was used to treat constipation. Brand et al[23] and Humphrey et al[24] reported on premature infants with hypermagnesemia following antacid administration in order to decrease the risk of gastrointestinal hemorrhage. One infant had an increased serum magnesium level of 13.3 mg/dL and developed intestinal perforation. These reports indicate that infancy, prematurity or young age might be a possible risk factor for hypermagnesemia.

Magnesium-containing cathartics are commonly used to treat chronic constipation. Although hypermagnesemia is a rare clinical condition, it can occur as a side effect of increased intake of magnesium salts.

Recent reports have highlighted that serum magnesium concentration increases significantly, but not critically, after daily treatment with magnesium oxide in children with normal renal function.

The present study indicated the safety of daily magnesium oxide treatment for children with chronic constipation.

The authors are to be congratulated for providing evidence of the apparent safety of a commonly used and effective therapy to treat an important health issue seen commonly in children.