Antimicrobial peptides, including defensins, are essential effectors in host defence and in the maintenance of immune homeostasis. Clinical studies have linked the defective expression of both α- and β-defensin to the reduced killing of certain microorganisms by the intestinal mucosa of patients suffering from ileal and colonic Crohn’s disease (CD), respectively. Only recently have the events leading to defective expression of defensins in CD been further elucidated, and are discussed herein. These events may account for CD-associated alterations in the microbiome and may subsequently precipitate the development of granulomatous inflammatory lesions in genetically-predisposed patients. We also address how these discoveries may pave the way for the development of a molecular medicine aimed at restoring gut barrier function in CD.

So far, in silico mining of human genomic databases have identified or predicted more than one hundred defensin-related sequences[1,2]. Based on their amino-acid sequences, these human peptides are divided into two categories, the α- and β-defensins (DEFA and DEFB, respectively). Although some defensins are not fully characterized, these molecules are cationic polypeptides smaller than 4 kDa. DEFA and DEFB possess six conserved cysteine residues that are linked in a 1-6, 2-4 and 3-5 pattern for DEFA and in a 1-5, 2-4 and 3-5 pattern for DEFB. Structural studies showed that the tertiary configuration of both DEFA and DEFB consist of triple-stranded β-sheet structures that are stabilized by three intramolecular disulfide bonds. DEFA and DEFB are stored within proteinaceous granules and are secreted through molecular mechanisms that still remain to be elucidated.

Of at least six human DEFA that are expressed within the gut mucosa, DEFA1-4, also referred to as Human Neutrophil Peptide 1 to 4, are predominantly secreted from azurophilic granules of polymorphonuclear leukocytes, while DEFA5 and DEFA6 are primarily contained in the apically-oriented secretory granules of Paneth cells. The latter is one of the four major epithelial cell lineages that reside at the base of the crypt of Lieberkühn in the small intestine. In addition to DEFA, only four human β-defensins (DEFB1 to DEFB4) have been studied in the past few decades. DEFB1 to DEFB4 are primarily expressed by epithelia of diverse gastrointestinal tissues, including stomach, small intestine and colon[3].

Biologically-active defensins are released upon the proteolytic processing of their proforms by certain enzymes[4], including trypsin for DEFA5 and DEFA6 in humans[5] and matrilysin for cryptdins in mice[6]. This suggests that appropriate control of homeostatic quantities of both defensins and defensin-activating proteases may ultimately dictate the outcome of the gut immunological response to intruding pathogens and to commensal microorganisms that are permanently present. Our understanding of the regulatory mechanisms that maintain appropriate expression of these antimicrobial factors, which are discharged within the intestinal lumen, is at an early stage. However, recent experimental and clinical findings, which are discussed hereafter, provide us with preliminary answers on how failure to maintain optimal defensin function may lead to dysbiosis and to the development of chronic inflammatory lesions.

THE ANTIMICROBIAL ACTIVITY OF DEFENSINS

The membrane integrity of a broad spectrum of microorganisms, including enveloped viruses, protozoa, bacteria and some fungi, is sensitive to the amphiphilic nature of defensins (Figure 1). Over the past decade, several models have been proposed to explain how defensin may induce non-oxidative killing of microorganisms. Notably, the Shai-Matsuzaki-Huang model provides a reasonable structure-function explanation for the antimicrobial character of defensins[7], whereby the cationic property of these antimicrobial effectors may disrupt the phospholipid bilayer as a detergent. Defensins may promote the formation of micelles by electrostatic forces to negatively-charged components of the microbial membrane, including lipopolysaccharide from Gram negative bacteria and lipoteichoic acids from Gram positive bacteria. Conversely, the nosocomial Gram positive bacteria Staphylococcus epidermidis and Staphylococcus aureus are thought to repulse the killing activity of defensins by expressing a membrane-bound molecule with a high density of negative charge[8] and by modifying its lipid membrane through Mprf[9], respectively. Similarly, both the two-component system PhoP/PhoQ and lipopolysaccharide are involved in resistance to defensins in the facultative intracellular bacterium Salmonella typhimurium (S. typhimurium)[10], providing a mechanism whereby certain pathogens may circumvent innate immune mechanisms. Additional investigations are now eagerly awaited to determine whether luminal secretion of certain defensins may influence immune homeostasis in any part of the gastrointestinal tract. 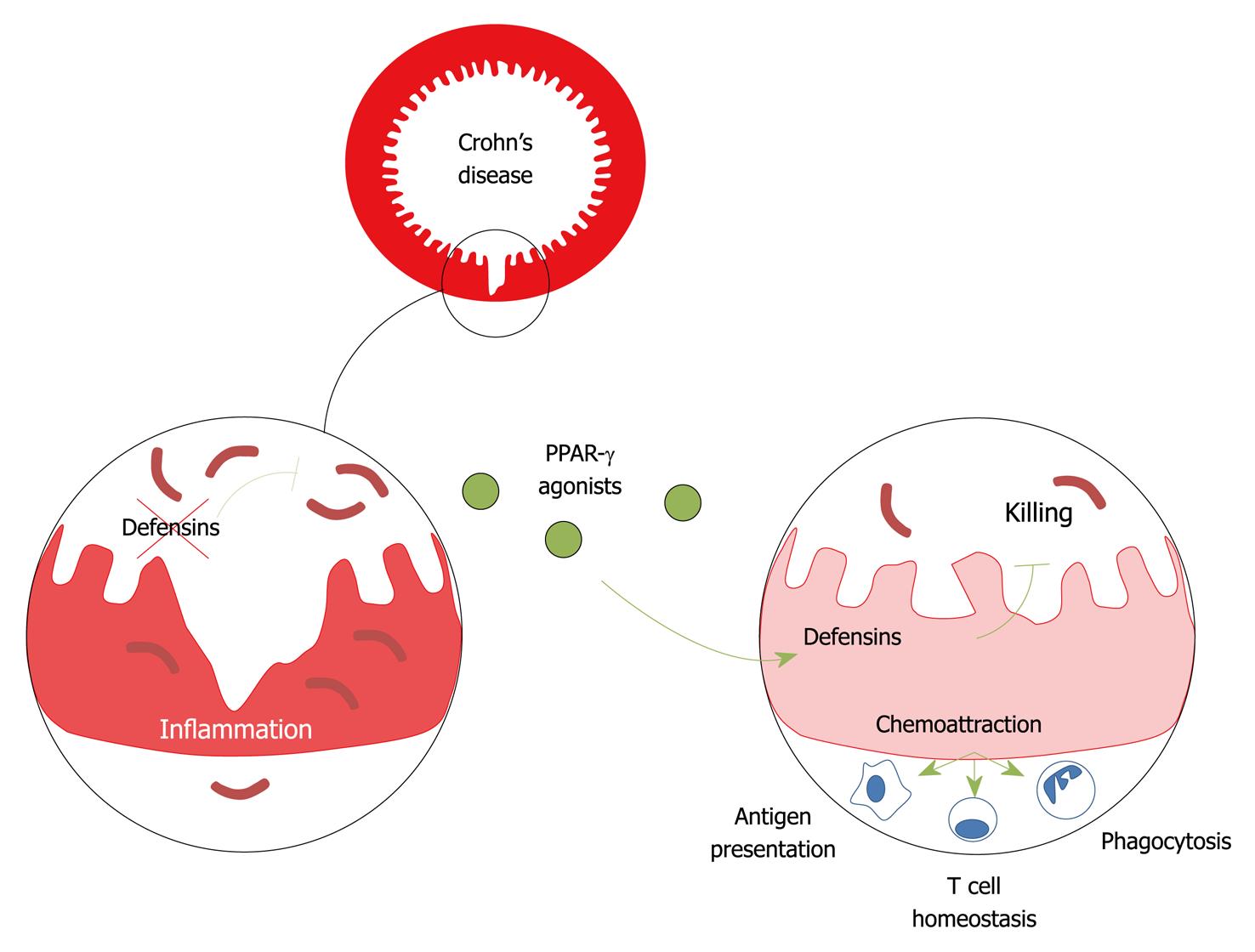 Figure 1 Model of defensin-mediated control of luminal microbiota and maintenance of immune homeostasis in the gut. PPAR: Peroxisome proliferator-activated receptor.

Genetically engineered mice that express the human DEFA5 showed oral resistance to salmonellosis[11]. Conversely, matrilysin deficiency is linked to enhanced susceptibility to oral infection by S. typhimurium[6]. Similarly, genetic ablation of the Crohn’s disease (CD) predisposing NOD2 gene leads to reduced expression of certain cryptdins and to enhanced susceptibility to orogastric Listeria monocytogenes infection[12]. More importantly, molecular analyses point to profound changes in the composition of the gut microbiome from DEFA5-transgenic mice[13]. As a consequence, an abnormal T cell homeostasis, including fewer interleukin 17 (IL-17)-producing lamina propria T cells, and an overt resistance to colonization of the ileum by segmented filamentous bacteria were observed in DEFA5-transgenic mice[13]. The gastrointestinal tract, in a large proportion of the human population, is colonized by Gram positive anaerobic segmented filamentous bacteria that are thought to regulate both Th17 differentiation[14,15] and secretory immunoglobulin A production[16,17]. Besides DEFA5, a physiological role for mouse β-defensin 1 (mDefB1) in host defence has been primarily unveiled in the pulmonary and urinary tract. Genetic ablation of mDefB1 expression failed to impede the outcome of lung infection by Haemophilus influenzae[18], but also resulted in enhanced bacterial burden of Staphylococcus in the bladder when compared to controls[19]. However, even if certain pathogenic microorganisms inhibit the secretion and/or killing activity of defensins[20], the latter still provide partial protection against infection, suggesting another prophylactic role for these key elicitors of mammalian immunity.

THE IMMUNOREGULATORY FACET OF DEFENSINS

In essence, defensins are regarded as “natural antibiotics”, but accumulating immunological investigations revealed that these long-held antimicrobial peptides may also educate the gut immune system through multiple mechanisms (Figure 1). Indeed, it has been known for some time that DEFA1 is not only involved in the attraction of monocytes to inflammatory sites[21], but also of T cells and immature dendritic cells[22]. Recent immunological investigations have now revealed that this phenomenon is not restricted to α-defensins. Notably, β-defensins were chemotactic for T cells[23], dendritic cells[23], monocytes[24,25] and mast cells[26]. Interestingly, the presence of a disulfide bridge was required for DEFB2 to recruit immunocytes through the C-C chemokine receptor 6[27]. Besides their direct chemoattracting function, certain defensins may also contribute to the recruitment of immune cells by eliciting the expression of co-stimulatory molecules and secretion of a subset of cytokines and chemokines by a myriad of cell types through receptor-dependent mechanisms[28]. Notably, DEFB2 and DEFB3 have been characterized as signalling ligands per se for some membrane-bound pathogen-recognition receptors, including the toll-like receptors 4 and 2, respectively[29,30]. The expression of the co-stimulatory molecules CD80, CD86 and CD40 is consistently enhanced after exposure of monocytes and dendritic cells to recombinant DEFB3 in a MyD88-dependent manner[29]. Likewise, treatment of immature dendritic cells with exogenous recombinant DEFA1 and DEFB1 enhanced the expression of CD80, CD86, CD40, the maturation marker CD83, and HLA-DR[31]. Moreover, both neutrophil-derived defensins and DEFB2 have been involved as positive regulators of neovasculogenesis and wound healing[32-34], but our understanding of the underlying mechanisms still remains incomplete.

TOWARDS A CAUSAL LINK BETWEEN DEFENSINS AND CROHN’S DISEASE DEVELOPMENT

In recent years, defensins have been observed to be negative regulators of both infectious diseases and of chronic inflammatory diseases, including CD. As many as 4 million adults are affected by CD in Europe and North America, and there is no cure for this relapsing-remitting granulomatous illness. CD is traditionally characterized by the development of transmural inflammatory lesions that may affect any part of the bowel. The ileal and colonic mucosa of patients with CD show impaired antimicrobial activity against major components of the microbiota, which is not found in biopsies of healthy subjects or patients with ulcerative colitis, another inflammatory bowel disease[35,36]. In a clinical study by Wehkamp and collaborators, decreased expression of both DEFA5 and DEFA6 was linked to the development of CD-associated lesions in the small intestine[35,37]. More recently, decreased expression of DEFB1 was observed in CD patients with colonic involvement[38]. While the transcript level of the neutrophil chemoattractant IL-8 is a surrogate marker of inflammation, it failed to correlate with DEFA5 and DEFB1 transcript levels in Crohn’s ileitis and colitis, respectively[35,38]. Similarly, levels of DEFA5 and DEFB1 were not modulated by most current therapies for CD[39]. Collectively, these findings reinforce the notion that decreased expression of defensins may result in excessive inflammation which is the basis of CD. Furthermore, consistent with the chemoattracting function of defensins, trauma to intestinal or cutaneous epithelia in CD patients is also associated with impaired neutrophil attraction when compared to controls[40]. Decreased expression of defensins in CD may account for defective local microbial killing and for reduced attraction of immunocytes to mucosal breaches, but what causes the impaired expression of defensins?

To determine the mechanisms underlying the defect in defensins in ileal and colonic CD, the promoter of both DEFA5 and DEFB1 were screened for potential disease-associated variants. Genetic errors in a regulatory region downstream of the human DEFA5 gene were found to predispose to ileal CD development[41]. In the ileum, both NOD2 and the Wnt-signalling pathway transcription factor Tcf7l2 were characterized as positive regulatory molecules of DEFA5 expression in human and of certain cryptdins in mice[12,35,42]. Notably, patients carrying the 1007fs NOD2 mutation and those with lowered expression of Tcf7l2 showed a significantly decreased transcript level of DEFA5[43]. We recently showed in the colon, that engagement of the peroxisome proliferator-activated receptor peroxisome proliferator-activated receptor (PPAR)-γ with rosiglitazone triggered epithelial DEFB1 expression in vitro and in vivo[38]. Dysregulated PPAR-γ production consistently results in reduced antimicrobial activity of the mucosa against major components of the microbiota in mice[38]. Furthermore, the single nucleotide polymorphism rs1800972, which is located within the promoter region of the human DEFB1 gene, was also found to be protective towards colonic CD development[38,44] and to positively regulate the expression of DEFB1[45].

At present, the therapeutic management of CD is far from optimal. Approximately 25% of patients fail to respond to current biologics and/or to immunosuppressive drugs. Given the essential role of defensins in maintaining gut homeostasis, defensin deficiency requires to be corrected in CD. Recent experimental investigations provided preliminary answers to this problem by identifying the PPAR-γ agonist rosiglitazone as a potent inducer of a subset of β-defensin in mouse colon[38], opening the way for the potential correction of gut barrier function in CD. The development of a mucosal-delivery system for PPAR-γ agonists is now eagerly awaited to improve their therapeutic efficacy, while avoiding potential systemic side effects. Finally, it is worth noting the regulatory role of additional nuclear receptors, including vitamin D and PPAR-β, in regulating the expression of other antimicrobial peptides, including certain defensins[46-49]. The potential synergistic effects of these regulatory factors on the expression of intestinal defensins remains to be addressed. Drugs and diets which can modulate the expression of defensins may thereby protect against colitis and colitis-associated cancer by maintaining sufficient levels of these versatile antimicrobial peptides.