Portal vein cannulation is a rare complication of endoscopic retrograde cholangiopancreatography (ERCP). It has been reported that it usually occurs after endoscopic sphincterotomy, whereas in cases without prior sphincterotomy, the presence of portobiliary fistulas has been shown. Here, we present a case in which cannulation of the portal vein occurred despite careful wire-guided cannulation and the absence of sphincterotomy. Although fatal cases of cerebral and pulmonary air and/or bile embolism have been reported in patients with combined portal and hepatic vein trauma after ERCP and sphincterotomy, isolated portal vein cannulation, as in the current case, does not usually result in mortality or serious morbidity. However, awareness of this rare complication is important so that no further intervention is performed.

A 68-year-old man presented acutely with a 2-wk history of right upper quadrant (RUQ) pain, fever, and dark urine. Physical examination revealed mild RUQ tenderness. Investigations demonstrated deranged liver function tests with raised alkaline phosphatase (481 U/L, reference < 130 U/L), alanine aminotransferase (371 U/L, reference < 55 U/L) and bilirubin (55 μg/L, reference < 22 μg/L). C-reactive protein was elevated (195 mg/L, reference < 10 mg/L) but full blood count and renal profile were normal. Transabdominal ultrasound scan showed dilated intrahepatic bile ducts and multiple calculi in the gallbladder. Endoscopic retrograde cholangiopancreatography (ERCP) was undertaken. The papilla was edematous (prior to instrumentation), which made cannulation difficult. When wire-guided cannulation was achieved, injection of 10 mL contrast failed to opacify the biliary tree (Figure 1). The procedure was aborted and abdominal computed tomography showed air in the portal venous system (Figure 2). The patient remained asymptomatic and was hemodynamically stable. He was observed as an inpatient, and 4 d later had a repeat ERCP. The common bile duct was cannulated and a cholangiogram showed multiple filling defects consistent with stones, but no opacification of the portal venous system occurred. All stones were removed after endoscopic sphincterotomy and the patient was referred for elective laparoscopic cholecystectomy. 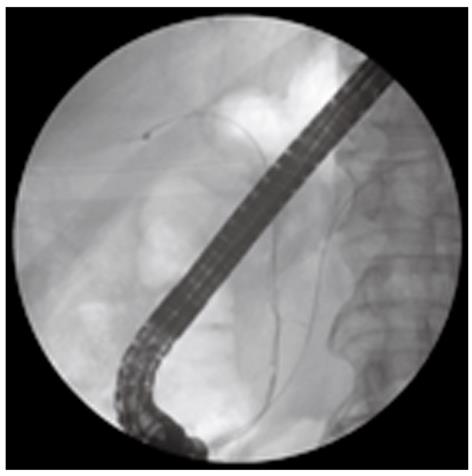 Figure 1 Sphincterotome in the portal vein after guide-wire cannulation. A two-wire technique was used as, initially, the pancreatic duct was cannulated. 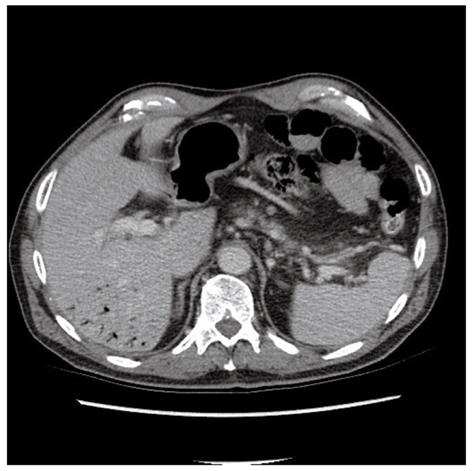 Opacification or deep cannulation of the portal vein is a rare complication of ERCP, which occurs in 1 of 6000-8000 procedures[1]. It has been reported to occur mainly, but not solely, in patients with pancreatic cancer[1-5]; usually after pre-cut and/or conventional sphincterotomy[1,3]. Portal vein cannulation may occur as a result of direct trauma to the papilla or mucosal and vascular laceration[1]. In cases in which sphincterotomy was not performed, investigators have noted the presence of portobiliary fistulas due to presumed tumor infiltration[2] or erosion by abscesses[4]. In the current case, cannulation of the portal vein occurred despite careful wire-guided cannulation and absence of sphincterotomy. Although fatal cases of cerebral and pulmonary air and/or bile embolism have been reported in patients with combined portal and hepatic vein trauma after ERCP and sphincterotomy[6], isolated portal vein cannulation, as in the current case, has not been reported to result in mortality or serious morbidity[5]. However, in the event of large defects in the portal vein with serious bleeding, balloon tamponade or stenting with a fully covered stent can be performed, prior to considering surgical repair. Finally, awareness of this rare complication is important, so that it is readily recognized by endoscopists, and no further intervention (e.g., sphincterotomy or stent insertion into the portal vein) is performed.