Drug-induced hypersensitivity syndrome (DIHS) is a severe reaction usually characterized by fever, rash, and multiorgan failure, occurring 2-6 wk after drug introduction. It is an immune-mediated reaction involving macrophage and T-lymphocyte activation and cytokine release. A 54-year-old woman was diagnosed with rheumatic arthritis and initiated salazosulfapyridine by mouth. About 10 d later, she had a high fever, skin rash and liver dysfunction. She was admitted to hospital and diagnosed with a drug eruption. She was treated with oral prednisolone 30 mg/d; however, she developed high fever again and her blood tests showed acute liver failure and cytopenia associated with hyperferritinemia. She was diagnosed with acute liver failure and hemophagocytosis caused by DIHS. She was transferred to the Department of Medicine and Bioregulatory Science, Kyushu University, where she was treated with arterial steroid injection therapy. Following this treatment, her liver function improved and serum ferritin immediately decreased. We hypothesized that an immune-mediated reaction in DIHS may have generated over-activation of macrophages and T-lymphocytes, followed by a cytokine storm that affected various organs. The measurement of serum ferritin might be a useful marker of the severity of DIHS.

Drug-induced hypersensitivity syndrome (DIHS) is one of the most severe drug eruptions, and is similar to toxic epidermal necrolysis and Stevens-Johnson syndrome[1]. It is characterized by maculopapular rash, high fever (≥ 38 °C), hepatic dysfunction, leukocytosis with eosinophilia, and an increased number of atypical lymphocytes usually appearing 2-6 wk after exposure to certain drugs[2]. Although the pathology of DIHS remains unknown, involvement of human herpes virus 6 (HHV-6) has recently been suggested[3,4]. DIHS is an immune-mediated reaction involving macrophage and T-lymphocyte activation and cytokine release associated with HHV-6 reactivation. However, there is no consensus on its etiology[5,6]. On the other hand, overactivation of macrophages is crucial for the development of other diseases, including hemophagocytic syndrome[7]. In patients with hemophagocytic syndrome, increased serum ferritin levels are thought to be secreted by activated macrophages[8]. However, to our knowledge, there are few reports that examine the correlation between the severity of DIHS and serum ferritin levels. In this report, we describe a case of acute liver failure (ALF) caused by DIHS associated with hyperferritinemia.

In January 2009, a 54-year-old woman presented to a clinic with morning stiffness in her hands. She was diagnosed with rheumatic arthritis and started treatment with oral salazosulfapyridine at 1 g/d on January 21. She developed a rash on her upper and lower extremities on February 2, with a fever of 37.6 °C on February 5. She presented to the clinic and discontinued salazosulfapyridine. Her blood test showed liver enzyme elevation [aspartate aminotransferase (AST), 50 U/L; alanine aminotransferase (ALT), 65 U/L]. However, her skin rash worsened. She was admitted to the Department of Dermatology, Kyushu Medical Center, National Hospital Organization on February 13. On admission, she had multiple areas of exudative erythema on her trunk and limbs. Laboratory data showed a white blood cell count of 14 700/μL with 9.0% eosinophils. AST and ALT levels were 59 U/L and 112 U/L, respectively.

She was diagnosed with drug eruption on the basis of clinical symptoms and the results of laboratory data, and treated with oral prednisolone 30 mg/d. After treatment, her liver function and rash improved gradually. However, she developed a high fever again on February 17. Her blood test showed ALF and cytopenia. Laboratory data on February 20 were as follows: white blood cell count of 6200/μL with 2.0% eosinophils; hemoglobin, 10.8 g/dL; platelet counts, 63 000/mm3; AST, 1849 IU/L; ALT, 1623 IU/L; PT-INR, 1.79. Ultrasonography showed moderate ascites. A bone marrow aspiration demonstrated an increased number of macrophages with hemophagocytosis. The patient was diagnosed with ALF and hemophagocytosis caused by DIHS. She was transferred to the Department of Medicine and Bioregulatory Science, Kyushu University, for treatment of ALF. 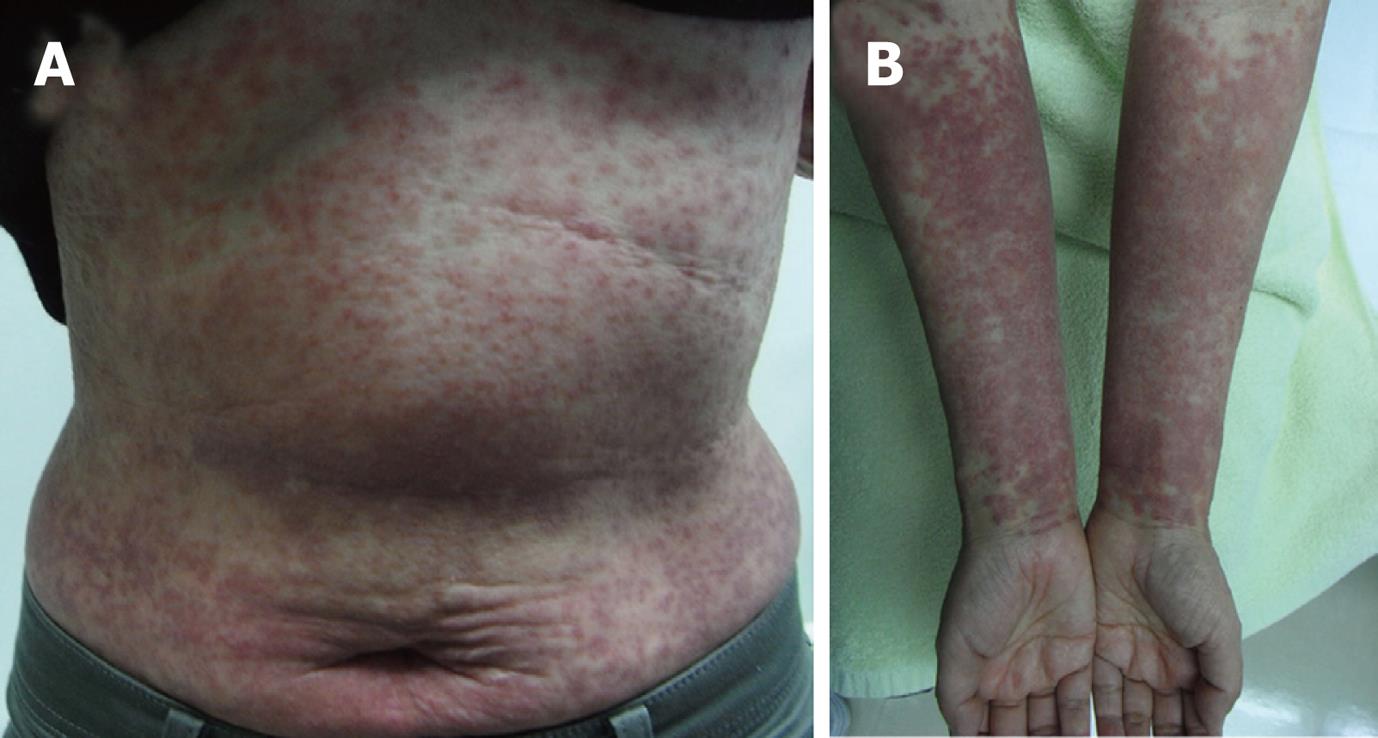 Figure 1 Multiple areas of exudative erythema were seen on admission. A: Body trunk; B: Forearm. 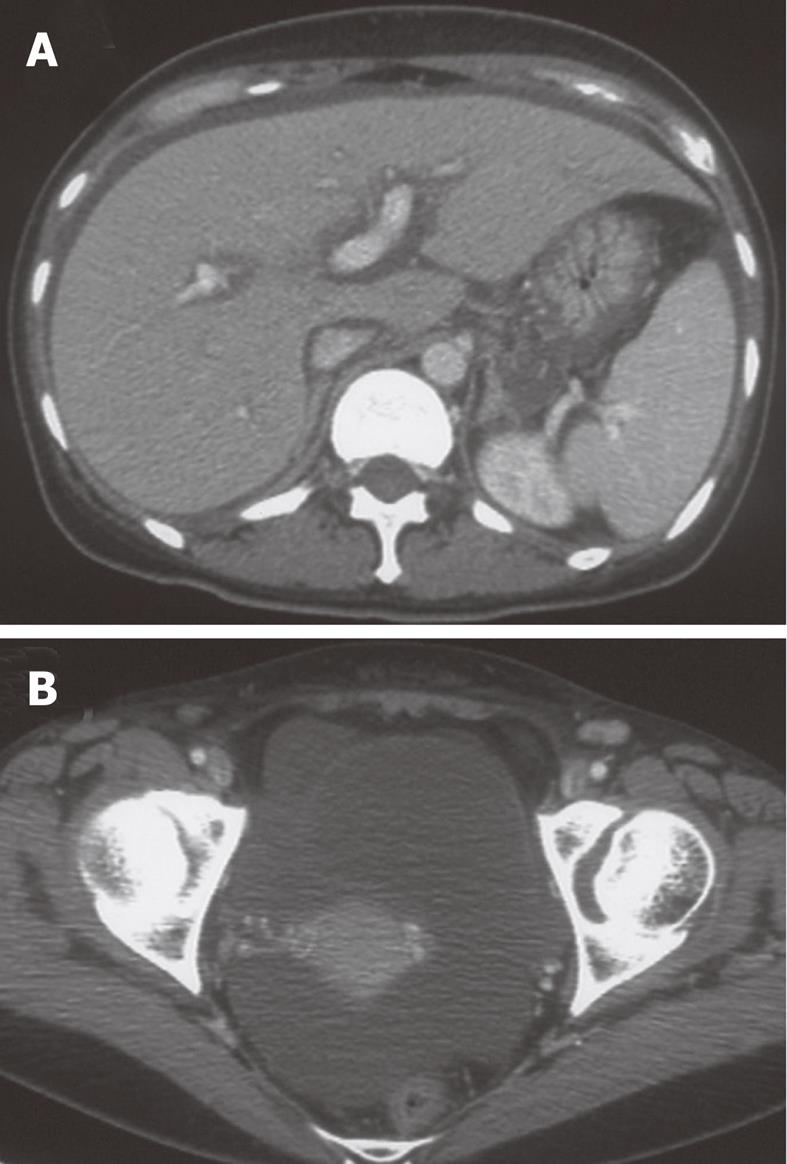 Our diagnosis was DIHS based on high fever, rash, liver dysfunction, swelling of cervical lymph nodes, and eosinophilia. Hyperferritinemia in her blood samples led us to think that activated macrophages in the liver might play a key role in ALF. Therefore, we decided to use arterial steroid injection therapy to suppress macrophage activation seen in ALF[9].

A 5-frame catheter was inserted from the right femoral artery to the common hepatic artery and the tip of the catheter was set in the proper hepatic artery. After insertion of the catheter, 1000 mg of methylprednisolone was infused for 2 h per day. We also performed plasma exchange therapy on the first day of admission, because the level of PT-INR was decreased. The arterial steroid injections were continued for 3 d, and the catheter was removed just after injection on the third day. Following arterial steroid injection therapy, her liver function improved immediately (Figure 3). Laboratory data on the fourth day of admission were as follows: AST 180 IU/L; ALT 597 IU/L; PT-INR, 1.18. After arterial steroid injection therapy, we started treatment with oral prednisolone at 40 mg/d and gradually decreased the dose. When liver dysfunction resolved, she was discharged from hospital (on March 3). In a serum sample taken 2 wk after hospitalization, anti-HHV-6 IgG titer had increased from 1:10 to 1:2560. She was diagnosed with typical DIHS according to criteria proposed by the Japanese Consensus Group; the patient had 7 items. 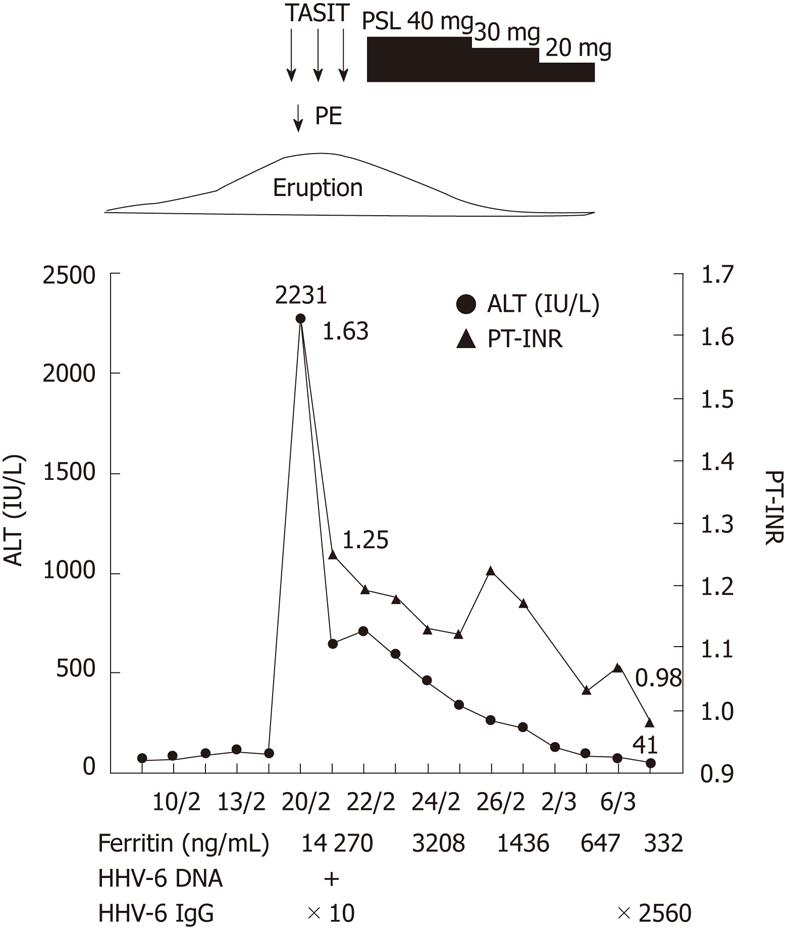 It is well-known that many patients with DIHS suffer liver injury and some progress to fatal liver failure. Until now, however, there has been no explanation of what causes ALF in some patients. Recently, it has been widely accepted that reactivation of herpes viruses such as HHV-6 and Epstein-Barr virus play a key role in the development of DIHS[3,4]. The question then becomes whether the reactivation of these viruses also contributes to the progression to ALF.

Hashimoto et al[10] evaluated clinical symptoms in 100 patients with DIHS and found that those with increasing serum anti-HHV-6 IgG titers suffered from severe organ involvement and a prolonged course of illness. In addition, they noted that flaring of symptoms, such as fever and hepatitis, was closely related to HHV-6 reactivation. However, none of the subjects in the study had ALF. In an investigation of case reports on the progression to ALF from DIHS, none indicated a correlation between viral reactivation and the development of ALF.

Since DIHS is triggered by some drugs, we should evaluate the possibility of drug-induced reactions that might directly harm hepatocytes and cause ALF. To our knowledge, there is no evidence that ALF is easily caused by specific drugs or in a dose-dependent manner. Therefore, we believe that the drugs causing DIHS do not directly injure numerous hepatocytes.

Some authors, speculating on the mechanism of progression to ALF, have indicated that DIHS develops through an immune-mediated reaction involving macrophages and T-lymphocytes[11]. In the last decade, several studies have suggested that activated intrahepatic macrophages play a key role in the development of ALF[12,13]. We also observed over-activation of intrahepatic macrophages in most of the patients with ALF in Japan[14]. One of the findings supporting this hypothesis is the markedly elevated serum ferritin concentration in those patients.

The patient presented in this report also had a markedly elevated serum ferritin concentration of over 20 000 ng/mL. One hypothesis is that intrahepatic over-activation of macrophages contributes to the development of ALF from DIHS as well as other etiologies. However, none of the past reports describing ALF from DIHS have referred to the elevation of serum ferritin concentration. To evaluate this hypothesis, cohort studies have focused on the correlation between the clinical course of patients with ALF from DIHS and the factors reflecting immune-mediated reactions.

Patients with DIHS can suffer not only from liver failure, but also various patterns of multiple organ failure, however, it remains unclear what induces these complications. We have hypothesized that an immune-mediated reaction in DIHS might generate over-activation of macrophages and T-lymphocytes, followed by a cytokine storm that affects various organs. In fact, this patient had elevated serum cytokines on admission (IL-6 10.8 pg/mL; IL-10 21 pg/mL). Such an immune reaction in bone marrow would result in pancytopenia, and liver involvement would cause liver failure. Both of these were seen in our patient.

It is well known that corticosteroids can suppress the activity of macrophages[15,16]. Therefore, it seems appropriate to use high-dose corticosteroids for DIHS. However, past reports show that corticosteroids are not always effective for ALF from DIHS. We speculate that intravenous injection of corticosteroids could be ineffective because the disturbance of hepatic microcirculation would prevent the drug from diffusing to the whole liver. Even in such a situation, injection via hepatic artery might be a useful option.

In this case report, we described a patient with ALF caused by DIHS associated with hyperferritinemia. In conclusion, we speculate that activated macrophages and a cytokine storm were associated with DIHS. The measurement of serum ferritin might be a useful marker of the severity of DIHS.