METHODS: Ten patients with HCC who received surgical resection after TAE were enrolled in the study group, and 24 patients with HCC who received surgical resection only served as the control group. In the study group, we measured the changes in tumor size and α fetoprotein (AFP) levels after TAE. All tissue samples were taken from the residual tumors. The expression of various apoptotic proteins was evaluated via immunoblotting procedures. The results were analyzed using a Student’s t test.

CONCLUSION: TAE is an effective palliative therapy that decreases tumor size and AFP levels via an increase in extrinsic apoptosis pathway in patients with unresectable HCC.

Hepatocellular carcinoma (HCC) is one of the most common malignant cancers in the world[1,2]. Generally, HCC is induced by chronic liver injury such as liver cirrhosis. The chronic injury leads to a change in the cellular properties of the liver and curtails the delivery of blood throughout the liver. Subsequently, this pathological change leads to a reduction in blood circulation throughout the liver and accompanying hypoxia. The increased cellularity associated with the highly proliferative tumor cells also induces local hypoxia inside the actual HCC[3]. Hypoxia can stimulate angiogenesis to support tumor growth by inducing angiogenic factors[3,4]. Many people with advanced HCC have tumors that are unresectable by the time of disease diagnosis. Transarterial embolization (TAE) appears to be as effective as transarterial chemoembolization (TACE) and plays a major role in the treatment of patients with advanced HCC[5,6]. However, the exact molecular changes and apoptotic pathway activity of cancerous tissues following embolization still needs to be elucidated.

Several studies have reported that TACE inhibits tumor angiogenesis and induces tumor cell apoptosis. Other studies have found that TACE stimulates tumor angiogenesis and increases the proliferative activity of the tumor cells due to anoxic stress-related Bcl-2 overexpression[7,8]. Unfortunately, most previous papers neglected to examine the counter factor of apoptotic protein (Bax) expression in residual viable cancerous tissues following TAE in HCC patients. We examined the expression of apoptotic proteins in the specimens taken from both groups (surgical resection only and surgery after TAE) of HCC patients. To determine whether the intrinsic or extrinsic apoptotic pathways were involved, we examined the Bcl-2/Bax ratio (anti-apoptosis protein/an inducer of apoptosis), cleaved caspase-9, Fas, cleaved caspase-8 and cleaved caspase-3 expression levels.

To our knowledge, this is the first report to study the apoptotic pathway in the residual viable cancerous tissues of HCC patients following TAE. A better understanding of the molecular changes and apoptotic pathways associated with HCC will aid in the development of more effective future therapies.

From January 2006 to December 2009, we enrolled 10 patients (6 men and 4 women; average age, 53.6 years) with HCC as a study group. All 10 patients received TAE with 95% alcohol and Gelform due to poor liver function and relative high initial risks for operation. The study group patients then underwent hepatic resection three weeks after the TAE. During the same period, we enrolled 24 patients (16 men and 8 women; average age, 54.4 years) who only received surgical resection for HCC as a control group. All liver tumor tissues were stored at -80 °C for immunoblotting (including Bcl-2/Bax ratio, cleaved caspase-9, Fas, cleaved caspase-8 and cleaved caspase-3) or fixed in formalin for immunohistochemical (IHC) staining (including caspase-9, caspase-8 and cleaved caspase-3). Simultaneously, we measured the changes in tumor size and α fetoprotein (AFP) in the study group after TAE. The specimens were removed only after written informed consent was obtained from the patients. This study was approved by the Institute Ethics Committee of Taichung Armed Forces General Hospital.

The immunoblotting method was modified from our previous studies[9,10]. In brief, aliquots containing 100 μg of sample supernatants were added to the sample buffer and heated at 95 °C for 5 min. After electrophoresis and transformation, blots (polyvinylidene fluoride membranes; Millipore, Bedford, MA, United States) were preincubated in phosphate buffer saline with 0.05% Tween 20 (PBST) buffer containing 5% (wt/vol) nonfat dried milk to minimize non-specific binding. According to the manufacturer’s manual, Bcl-2, Bax, cleaved caspase-9, Fas, cleaved caspase-8, cleaved caspase-3 and β-actin antibodies should bind to proteins with molecular weights of about 26, 23, 35-37, 48, 43, 17-19 and 44 kDa, respectively. The blots were cut into upper and lower parts at feasible sites for the incubations. The blots were incubated with the primary antibodies diluted in 1% bovine serum albumin and 0.05% sodium azide in PBST. The blots were then incubated with HRP-conjugated secondary antibody diluted in PBST. The blots were developed using a SuperSignal West Pico Detection Kit (No. 34082, Pierce). After development, the immunoblots were scanned and imported as TIFF files. All immunoreactive bands were analyzed using MCID software version 7.0 (Imaging Research, Ontario, Canada). The results were converted to numerical values to compare the relative protein abundance of the immunoreactive bands.

The immunohistochemical (IHC) staining method used was modified from our previous study[9]. In brief, the sections were stained with primary antibody (caspase-9, caspase-8 or cleaved caspase-3) or PBS (negative control) before being analyzed with the commercial kit. The sections were observed under light microscope (model BX50; Olympus, Tokyo, Japan), and the micrographs were reviewed.

All data were analyzed using the Student’s t test with P < 0.05 being considered statistically significantly different. Values were expressed as the mean ± SE. 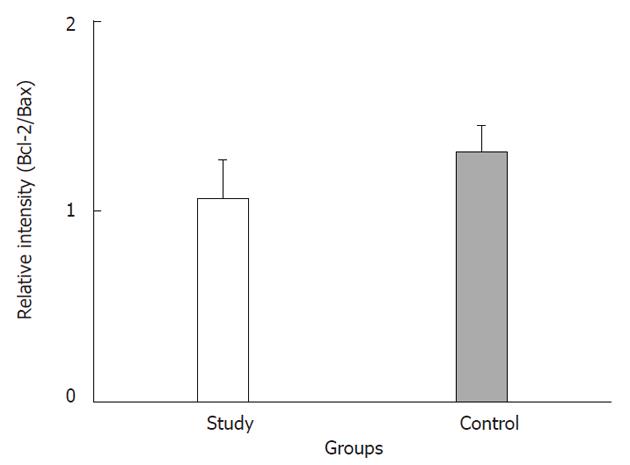 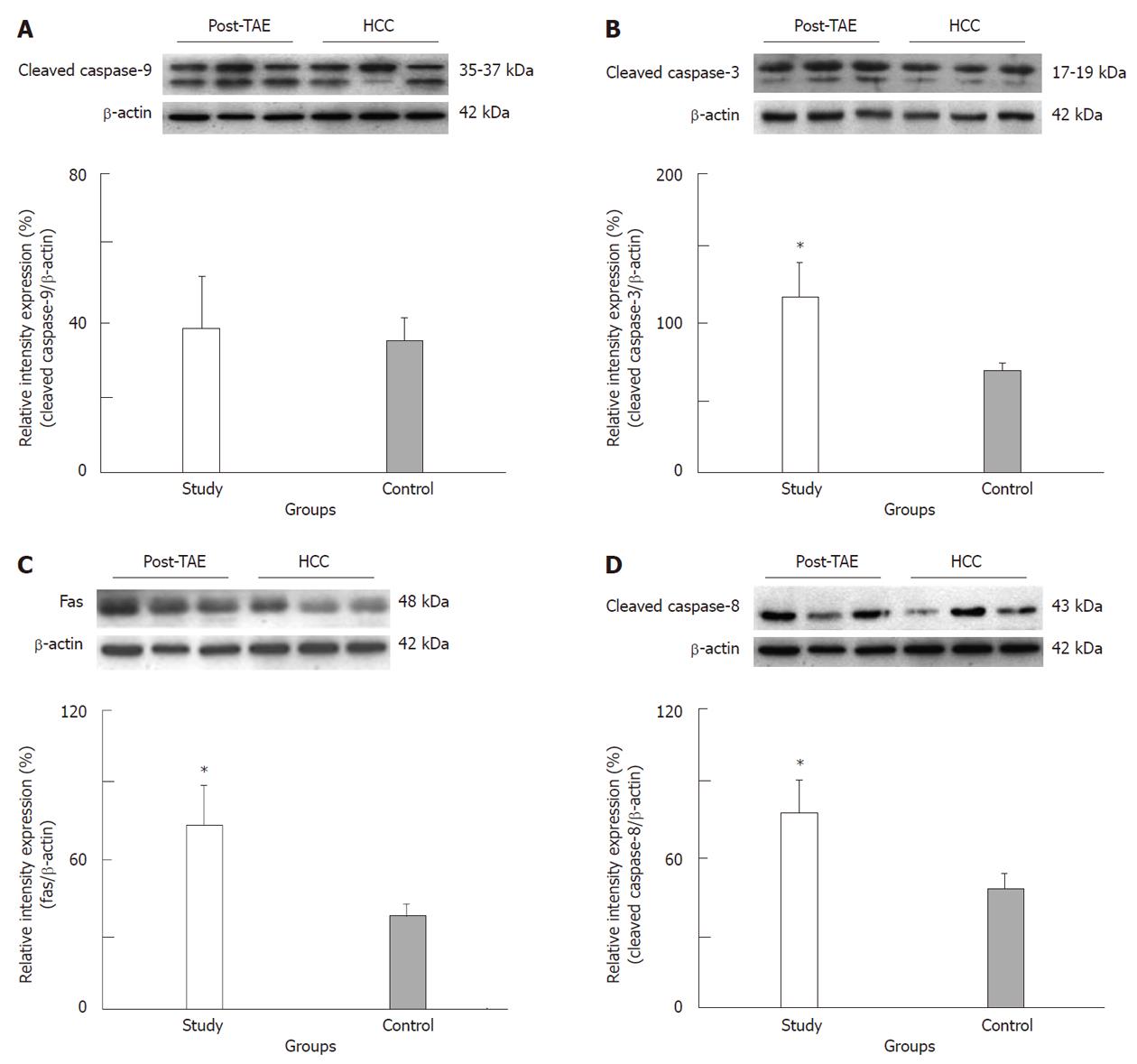 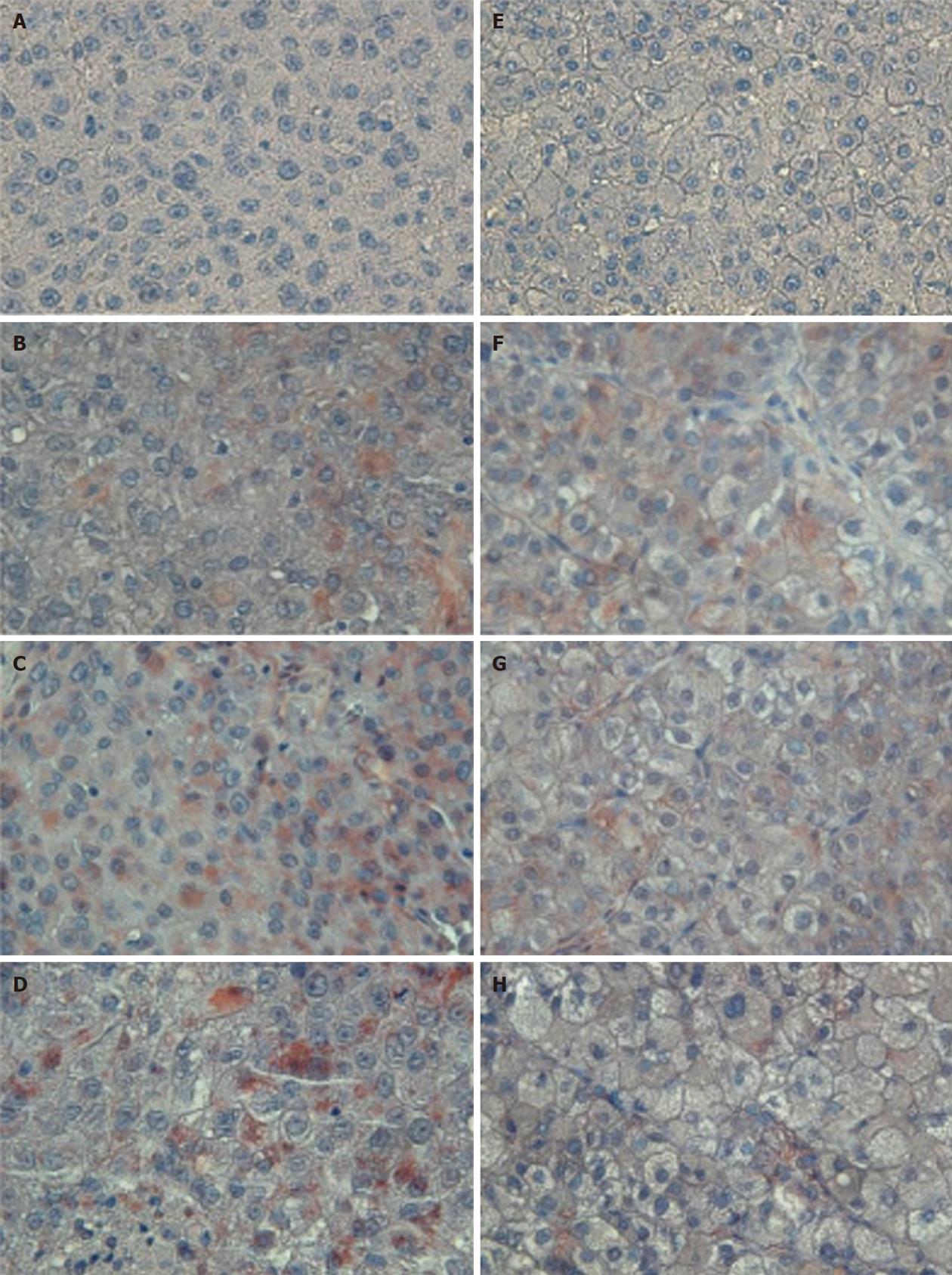 These findings demonstrated that the decreased tumor size and AFP levels in HCC patients following TAE resulted from increased activity of the extrinsic apoptosis pathway.

HCC is one of the most common and lethal malignant tumors worldwide. The late diagnosis and advanced underlying liver cirrhosis responsible for HCC generally makes complete resection non-viable. TACE is one of the most validated treatments for unresectable HCC in patients with preserved liver function[11-13]. Several studies have reported that TACE inhibits tumor angiogenesis and induces tumor cell apoptosis[7,14]. Conversely, other studies indicate that TACE stimulates tumor angiogenesis and increases proliferative activity of the tumor cells due to hypoxic stress-induced Bcl-2 overexpression[7,8]. Hypoxia enhances proliferation, angiogenesis, metastasis, chemoresistance and radioresistance to suppress differentiation and apoptosis of HCC[15]. Therefore, combining therapies that induce and target hypoxia may be beneficial to HCC patients. TAE appears to be as effective as TACE in improving survival rates of cirrhotic HCC patients[5,6,16]. TAE allows local tumor response to reach 88%, and in addition, bleeding control can be increased from 83% to 100%[17,18]. However, there have been no further studies investigating the molecular changes and apoptotic pathways of residual viable HCC tissues following TAE.

Apoptosis, in multicellular organisms, plays an important role in development and tissue homeostasis[19-21]. The two major mechanisms of cell death are referred to as the intrinsic and extrinsic pathways. The intrinsic (or mitochondrial) pathway is induced by cellular stress, which involves Bcl-2, Bax, mitochondrial outer-membrane permeability and caspase-9 protein. The extrinsic (or death receptor) pathway is induced by specific ligands that engage death receptors, which generally involves Fas and the binding and activation of caspase-8 protein[22-24]. In the human apoptotic pathway cascade, 14 caspases (cysteinyl aspartate-specific proteinases) have been discovered to date[25,26]. Among them, caspase-3 is considered the most crucial executioner protease, as it is essential for apoptotic death in mammalian cells[27].

In this study, tumor size and AFP level were decreased by 46.2% and 55.3% following TAE, respectively. There was no significant difference of Bcl-2/Bax ratio and cleaved caspase-9 expression in either group. However, the expression levels of Fas and cleaved caspase-8, both involved in the extrinsic pathway, were significantly higher in the study group than in control group. In addition, increased cleaved caspase-3 expression was also observed in the TAE group (1.62-fold over the control group level). These findings demonstrate increased apoptosis through the extrinsic pathway in HCC patients following TAE. Previous studies had not examined the expression of proliferative and apoptotic proteins (Bcl-2 and Bax) in residual viable HCC tissues simultaneously.

In conclusion, our data indicate that TAE is an effective palliative therapy that decreases tumor size and AFP levels via increasing the extrinsic apoptosis pathway in patients with unresectable HCC. Thus, it would be of interest to investigate whether increasing the expression of extrinsic apoptotic proteins could provide more effective treatment for patients with HCC.

Transarterial embolization (TAE) plays a major role in the treatment of patients with unresectable hepatocellular carcinoma (HCC). However, the apoptotic pathway of residual viable HCC tissues following TAE remains unclear. Elucidating the apoptosis pathway associated with residual viable HCC following a TAE procedure should aid in the development of more effective therapies in the future.

To evaluate potential therapeutic effects, the authors examined the changes in tumor size and α fetoprotein (AFP) levels following TAE. There are two major mechanisms of cell death, and the intrinsic and extrinsic pathways. The intrinsic (or mitochondrial) pathway is induced by cellular stress, which involves Bcl-2, Bax and caspase-9 protein. The extrinsic (or death receptor) pathway is induced by specific ligands that engage death receptors, which involves Fas and the binding and activation of caspase-8 protein. Caspase-3 is considered as the crucial executioner protease because it is essential for apoptotic death in mammalian cells. All of these apoptotic proteins were examined during this study.

This is the first report to study the apoptotic pathway in the residual viable cancerous tissues of patients with HCC following TAE. A better understanding of the molecular changes in and apoptotic pathways of HCC should lead to the development of more efficacious therapies in the future.

This is a study showing different expression of apoptotic proteins in residual viable HCC tissues in patients subjected to TAE or not. The authors demonstrated that in TAE group there is a significant increase of apoptosis through extrinsic pathway.