Bevacizumab (Avastin®, Chugai, Tokyo, Japan) is a recombinant humanized monoclonal antibody that selectively binds to and neutralizes the biological activity of vascular endothelial growth factor (VEGF) receptor[1-4]. It reduces tumor vascularization and inhibits tumor growth, and has been shown to be efficacious in metastatic breast, colorectal, non-small cell lung, and renal cell carcinoma in combination with other agents[1,5-9]. Thus, therapeutically bevacizumab can greatly enhance overall survival and progression-free survival in cases where patients are undergoing treatment for cancer metastasis or recurrence of colorectal cancer.

In spite of its efficacy, bevacizumab sometimes causes complications such as hypertension, gastrointestinal perforation, wound healing complications, arterial thromboembolic events, and bleeding, which are associated with mechanism-based adverse events. In 1977, it was reported that treatment with bevacizumab in a patient with undiagnosed brain metastasis from hepatocellular carcinoma caused fatal cerebral hemorrhage; this led to the suggestion that patients with brain metastases should not be treated with bevacizumab[9]. Conversely, several investigators have reported that there is no evidence that anti-VEGF therapy, including bevacizumab, results in an increased risk of intracranial hemorrhage (ICH), regardless of the presence of central nervous system (CNS) metastases[1,10]. Bhaskara et al[11] suggested that bevacizumab therapy is promising in the case of primary brain malignancies as well as metastatic disease. Therefore, whether cases with metastases to the CNS should be treated with combination chemotherapy including bevacizumab has provoked an ongoing discussion in this field[1,10]. Only a limited number of cases of CNS bleeding associated with bevacizumab treatment have been reported, offering little, if any, strong argument for limiting the use of bevacizumab as a combination therapy in cancer.

In this study, we report 2 patients with recurrent colorectal cancer in the absence of brain metastases who underwent bevacizumab treatment; severe multifocal or solitary ICH was observed after this treatment.

A 64-year-old man with lower rectal carcinoma underwent abdominoperineal excision with lymph node dissection in January 2004. According to tumor-node-metastasis (TNM) classification, the pathological stage of the carcinoma was T2N0M0 (stage II). He underwent adjuvant chemotherapy with oral 5-fluorouracil (5-FU) for 6 mo. Approximately 2 years after surgery, the serum carcinoembryonic antigen (CEA) level started to increase; however, radiological examination failed to show whether the cancer had recurred. The patient was afraid of recurrence and wished to receive an oral anticancer agent; therefore, S-1 treatment was provided. At the 3-year follow-up visit, computed tomography (CT) of the pelvis and the lateral segment of the liver revealed the first recurrence sites. He was subsequently prescribed FOLFOX-4 [oxaliplatin/5-FU/leucovorin (LV)] every 2 wk over 5 courses. Partial hepatectomy was performed for the solitary liver metastasis. Subsequently, FOLFOX-4 was repeated for approximately 12 mo; however, because of augmentation of the intrapelvic recurrence, bevacizumab was added in February 2010. After 4 courses of FOLFOX-4 in combination with bevacizumab (5 mg/kg), the patient suddenly developed dysarthria on day 2 of the 5th course, although he had tolerated the regimen fairly well until then. Brain CT revealed massive multifocal intracranial hemorrhage in the right frontal lobe, right temporal lobe, left occipital lobe, and right parietal lobe, although brain CT performed before bevacizumab administration revealed that there was no disorder in the brain, including metastasis (Figure 1). He had no history of head injury, but had hypertension before and after administration of bevacizumab, which was well controlled with medication. Hematological testing revealed slight thrombopenia (platelet count, 8.5 × 104/μL). These data together with other laboratory data for this patient met the criteria for the administration of FOLFOX-4 with bevacizumab. A neurosurgeon was immediately consulted, and an urgent craniotomy was performed to judge whether the multiple hemorrhages were accompanied by brain metastases. A hematoma was removed from the right frontal lobe of the brain. The removed hematoma did not show any histological signs of tumor components microscopically, which suggested that the multiple ICHs might be caused by bevacizumab. The patient soon recovered, and follow-up brain CT revealed the complete disappearance of multiple ICHs 6 wk after craniotomy. We discontinued chemotherapy, which included FOLFOX-4 with bevacizumab, and the patient was placed under another regimen; FOLFIRI (irinotecan/5-FU/LV), which the patient had not previously undergone, and was restarted within 8 wk after craniotomy. The serum CEA level gradually leveled off; intrapelvic recurrence has been uncontrollable since we discontinued the combination therapy of FOLFOX-4 with bevacizumab. 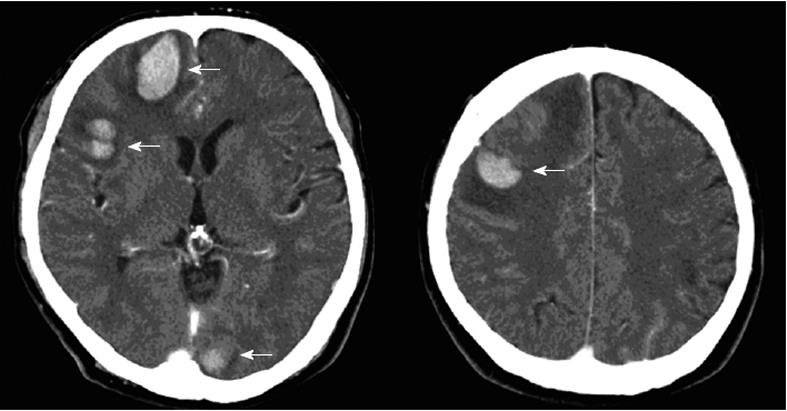 A 65-year-old man with ascending colon carcinoma and liver metastases underwent right hemicolectomy with lymph node dissection, and partial hepatectomy in February 2008. According to TNM classification, the pathological stage of the carcinoma was T2 N0 M1 (stage IV). He was treated with an intra-arterial infusion of 5-FU/intravenous infusion of LV for 5 mo. Subsequently, pulmonary metastasis became obvious in the 6-mo follow-up CT scan. Chemotherapy with oral 5-FU/LV was then prescribed for 6 mo, but the metastatic lesion progressed. He subsequently received FOLFOX-4 which was repeated for 15 courses over 12 mo. However, the lesion developed further. For the solitary pulmonary metastasis, partial lung resection was performed in March 2010. After that, a course of FOLFIRI with bevacizumab 5 mg/kg was started in July 2010. After 2 courses of FOLFIRI in combination with bevacizumab every 3 wk, which was tolerated fairly well, the patient suddenly developed left hemiplegia on day 11 of the 3rd course. Brain CT revealed right thalamus hemorrhage, although brain CT performed before starting chemotherapy showed no brain disorder, including metastasis, similar to case 1 (Figure 2). He had no history of head injury, but had hypertension that was well controlled with antihypertensive agents before and after administration of bevacizumab. His hematological results met the criteria for the administration of FOLFIRI with bevacizumab. Because of the right thalamic hemorrhage, combination chemotherapy of FOLFIRI with bevacizumab was discontinued. 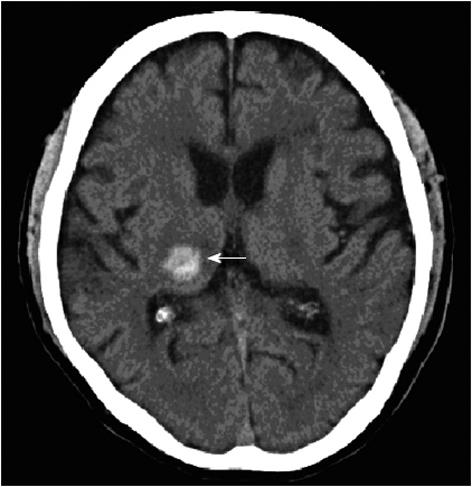 Although minor bleeding, for example, grade 1 or 2 epistaxis, is a well-known complication of bevacizumab, serious bleeding such as hematemesis or hemoptysis (grade 3 and 4) occurs only in 3% of the patients treated with bevacizumab[10,12]. As there is a possibility that bevacizumab administration can increase the risk of bleeding, it is advised that patients with CNS metastases should be excluded from treatment with bevacizumab. If bleeding into brain metastases occurs even once, it can have devastating complications that could develop into serious morbidity and mortality. To our knowledge, 8 cases of bevacizumab-associated CNS bleeding have been reported[13-16]. Table 1 shows the characteristics of these cases. There have been 2 case reports that raise caution regarding ICH in patients without brain metastases under bevacizumab administration due to the use of anticoagulant agents[13,14]. The first reports 2 cases where bevacizumab was accompanied by low-molecular-weight heparin. It draws attention to the fact that a full dose of anticoagulation agent with bevacizumab may increase the risk of ICH, regardless of whether a patient has any underlying parenchymal or intracranial vascular lesions[13]. The second study reports a case of arteriovenous malformation (AVM)[14]. These 3 patients did not have brain metastases, but presented with factors related to bleeding such as anticoagulation therapy and AVM. In addition to these 3 cases and the 2 cases presented here, 3 other cases of CNS bleeding have been reported by Chen et al[15] and Giantonio et al[16]. However, these 2 reports did not mention whether the patients had brain metastases[16].

The mechanism of bevacizumab is mainly thought to inhibit angiogenesis through VEGF. VEGF is an important mediator in new blood vessel formation in both physiological and pathological settings[2]. Among the multitude of factors driving tumor angiogenesis, VEGF is the most potent, exerting myriad effects on vascular pruning and sprouting, permeability, network formation, proliferation, and cell death. Despite the initial unimpressive clinical performance of anti-VEGF antibodies, such as bevacizumab, as a cancer monotherapy, clear improvements in clinical outcomes following combination therapy of bevacizumab with chemotherapy regimens, and multi-targeted VEGF receptor tyrosine kinase inhibitors, such as sorafenib and sunitinib, in selected tumor types have established VEGF-targeted agents as an effective means of controlling cancer growth[22]. Anti-VEGF therapeutic agents have been shown to have clinical benefits, although induction of bleeding is a recognized side effect that can sometimes occur and become troublesome during therapy.

As well as metastatic lesions, data are available from bevacizumab trials in primary malignant brain tumors. For instance, Vrendenburgh et al[23] reported the results of a phase II trial of bevacizumab and irinotecan treatment every 2 wk in recurrent malignant glioma, and showed that anti-VEGF therapy was not associated with an increased risk of ICH. Studies of anti-VEGF agents in patients with high-grade gliomas have been collectively presented by Carden et al[10]. They collated 5 studies of anti-VEGF agents including bevacizumab, vatalanib, and cediranib used in the treatment of high-grade gliomas[10]. The limited data currently available on these studies showed no evidence that anti-VEGF therapy for high-grade gliomas increased the risk of ICH[23,24].

Collectively, the existing clinical literature and the cases presented here, suggest that patients with metastatic or primary brain tumors need not necessarily be excluded from treatment with anti-VEGF agents, rather that anti-VEGF therapy needs to be prescribed only after careful examination of the patient’s history. This is because at least 6 out of 8 cases had CNS bleeding without CNS metastasis[13-15]. Although, we cannot deny that ICH in the 2 cases presented here could have occurred by chance, they both have commonalities in their clinical presentation. Both had high-blood pressure, even though it was well controlled with medication. Although only 2 such cases are presented here, we think that rather than examining whether primary or metastatic brain tumors are present or absent when considering risk factors for ICH during anti-VEGF treatment (including bevacizumab), precautions should be taken when treating patients who have thrombocytopenia or are undergoing therapy with anticoagulation or antihypertensive agents. The 2 cases presented here and recent available reports do not confirm that anti-VEGF therapy for patients with metastatic brain tumors from colorectal cancer is a safe treatment, but suggest that anti-VEGF agents, including bevacizumab, are an alternative for patients with metastatic colorectal cancers, even in the presence of brain metastases. Epidemiological prospective studies should be carried out in order to identify the risk factors for ICH in patients treated with anti-VEGF agents.