AIM: To compare non-liquid and clear-liquid diets, and to assess whether the latter is the optimal treatment for mild acute pancreatitis.

Early enteral nutrition therapy is important for management of severe as well as mild acute pancreatitis[1]. The initial part of the necessity is to prevent bacterial infection, as well as energy supplementation[2]. This kind of nutrition is always preferable via the nasojejunal route with a nasal bowel nutrition tube[3]. However, it is not necessary for mild acute pancreatitis patients because of longer length of hospitalization and discomfort[4,5].

In daily clinical care, 80%-90% of patients with acute pancreatitis demonstrate a mild clinical course of the disease[6]. The traditional initial treatment in mild acute pancreatitis has included: (1) fasting for the first few days; and (2) administration of parenteral fluids followed by clear-liquid-diet intake, orally until the abdominal pain has resolved and the levels of pancreatic enzymes have decreased[7-9]. It sounds reasonable that clear-liquid diet intake will shorten the presence of food in the duodenum, which reduces cholecystokinin release that stimulates pancreatic enzyme secretion[10]. Hospital discharge is usually planned on the basis of the patient’s tolerance to solid diet[11].

Oral re-feeding has been recommended to start with small amounts of clear-liquid diet, rich in carbohydrates and proteins and low in fat, gradually increasing or shifting the intake to soft or solid diet during 3-7 d, to avoid abdominal pain and pancreatitis relapse[12,13]. Unfortunately, to date, evidence is sparse concerning when one kind of diet should be shifted to another, and what kind of diet is definitely optimal re-feeding[14].

Some recent studies have suggested that oral re-feeding with soft or solid diet instead of clear liquids can be considered safe for pain recurrence, and shorten the length of hospitalization. Some randomized trials in patients with mild acute pancreatitis have shown that non-liquid diets are feasible and safe[15-17]. However, the results of these studies were inconclusive. The aim of the present study was to perform a meta-analysis of current randomized controlled trials (RCTs) to evaluate non-liquid diet (including soft and solid diets) as an initial treatment in mild acute pancreatitis.

The titles and abstracts of all citations identified by the literature search were reviewed. Selection criteria were then applied to all potentially relevant studies. Editorials and expert opinions, reviews without original data, case reports and studies lacking control groups were excluded. The selection criteria for inclusion in the meta-analysis were as follows: (1) only RCTs that compared non-liquid diet, including soft and solid diet, with clear-liquid diet were included; (2) diagnosis of mild acute pancreatitis was confirmed according to computed tomography scores, APACHE II scores, and basic laboratory examination; (3) outcomes of length of hospitalization (LOH), total length of hospitalization (TLOH), and recurrence of pain after re-feeding were reported; and (4) no other nutritious supplement treatment was given to patients.

Search strategy for identification of studies

Trials were identified by searching the Cochrane Library (Issue 1 2011), PubMed (March 2011), EMBASE (March 2011), Science Citation Index Expanded, and CBM (Chinese Biomedical Literature Database). The query was constructed by using the combination of the following keywords: (mild pancreatitis or acute pancreatitis) and (diet or nutritious supplement or nutrition). Articles published in any language were considered. Reference lists from the trials selected by electronic searching were hand-searched to identify further relevant trials. Abstracts of the articles selected from each of these multiple searches were reviewed and those meeting the criteria were recorded. In the case of duplicate reports, or studies obviously reporting results from the same study population, only the latest published results were used.

The quality of included studies was assessed independently by two authors (Meng WB and Li YM) without blinding to authorship or journal. Discrepancies were resolved by involving the third author, Xun Li. The quality of the studies was assessed using the scores proposed by Cochrane handbook 5 standards: randomization, allocation, concealment, blinding (participants, investigators, outcomes assessors, and data analysis), and completeness of follow-up.

Two investigators (Meng WB and Li YM) extracted the data from the studies that met the selection criteria (Tables 1, 2 and 3). The outcomes were totalled from the three studies. There was > 98% agreement for data extraction between the two investigators. 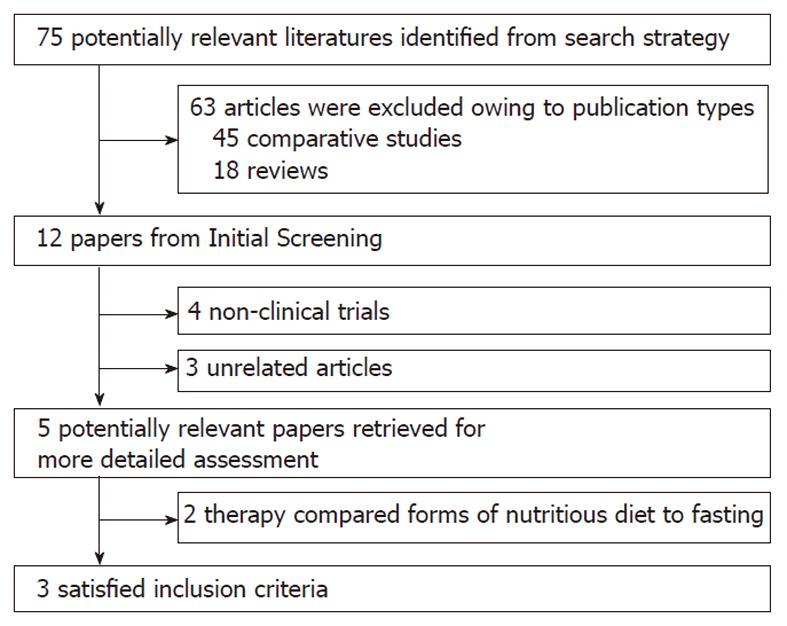 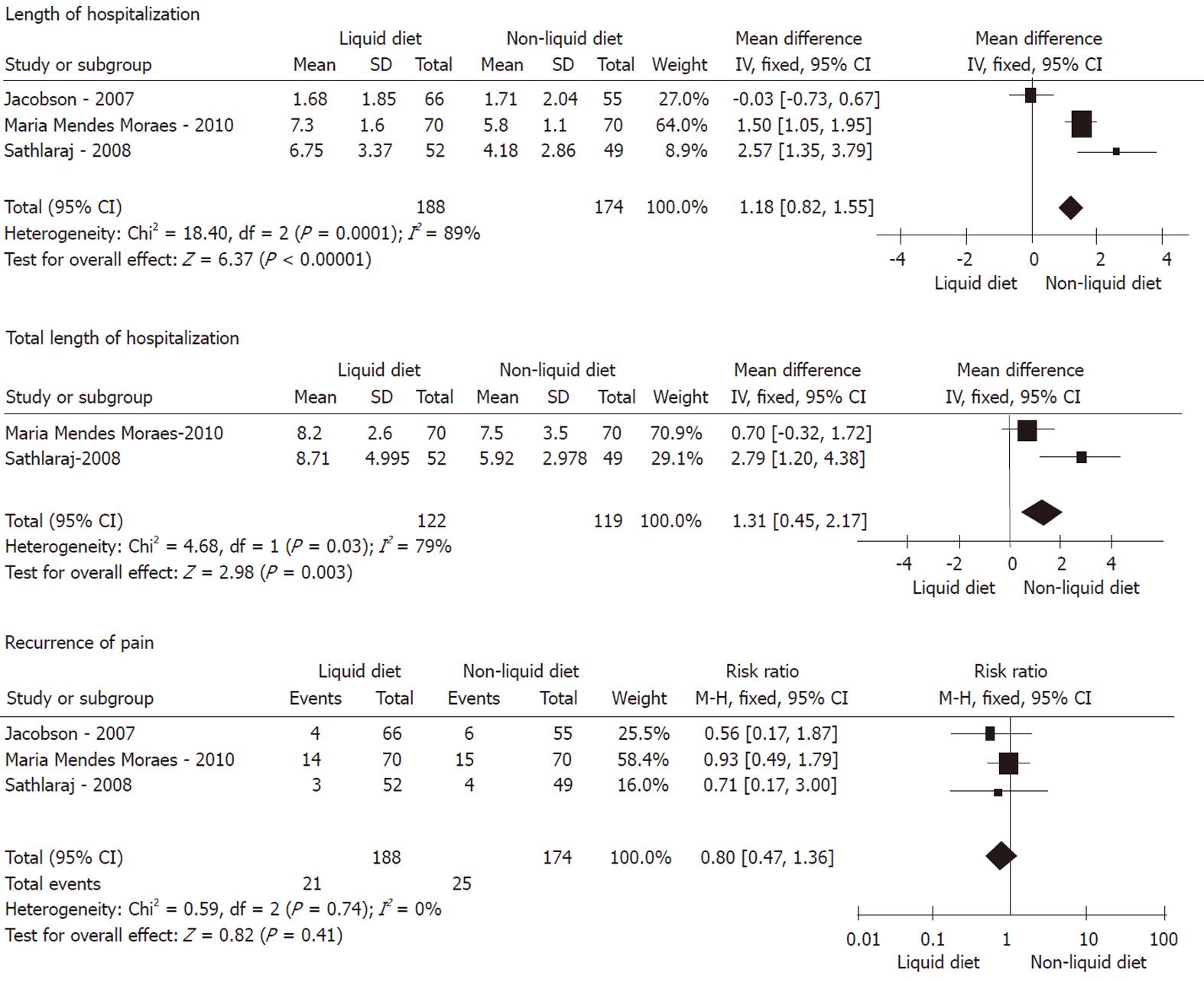 We analyzed the data using Review Manager (version 5.0)[18] and pooled data for summary estimates. We expressed results for dichotomous outcomes as relative risk (RR), and mean difference (MD) with 95% CIs for continuous outcomes. We used the χ2 test to assess heterogeneity between trials and the I2 statistic to assess the extent of inconsistency. Statistical significance cut-off for the test of heterogeneity was set at 0.10. We used a fixed-effect model for calculations of summary estimates unless there was significant heterogeneity, in which case, results were confirmed using a random-effects statistical model.

The flowchart of reviews shows the detailed process of study selection (Figure 1). The comparison was made between non-liquid and clear-liquid diets[15-17]. Three trials fulfilled the inclusion criteria.

Quality and characteristics of included studies 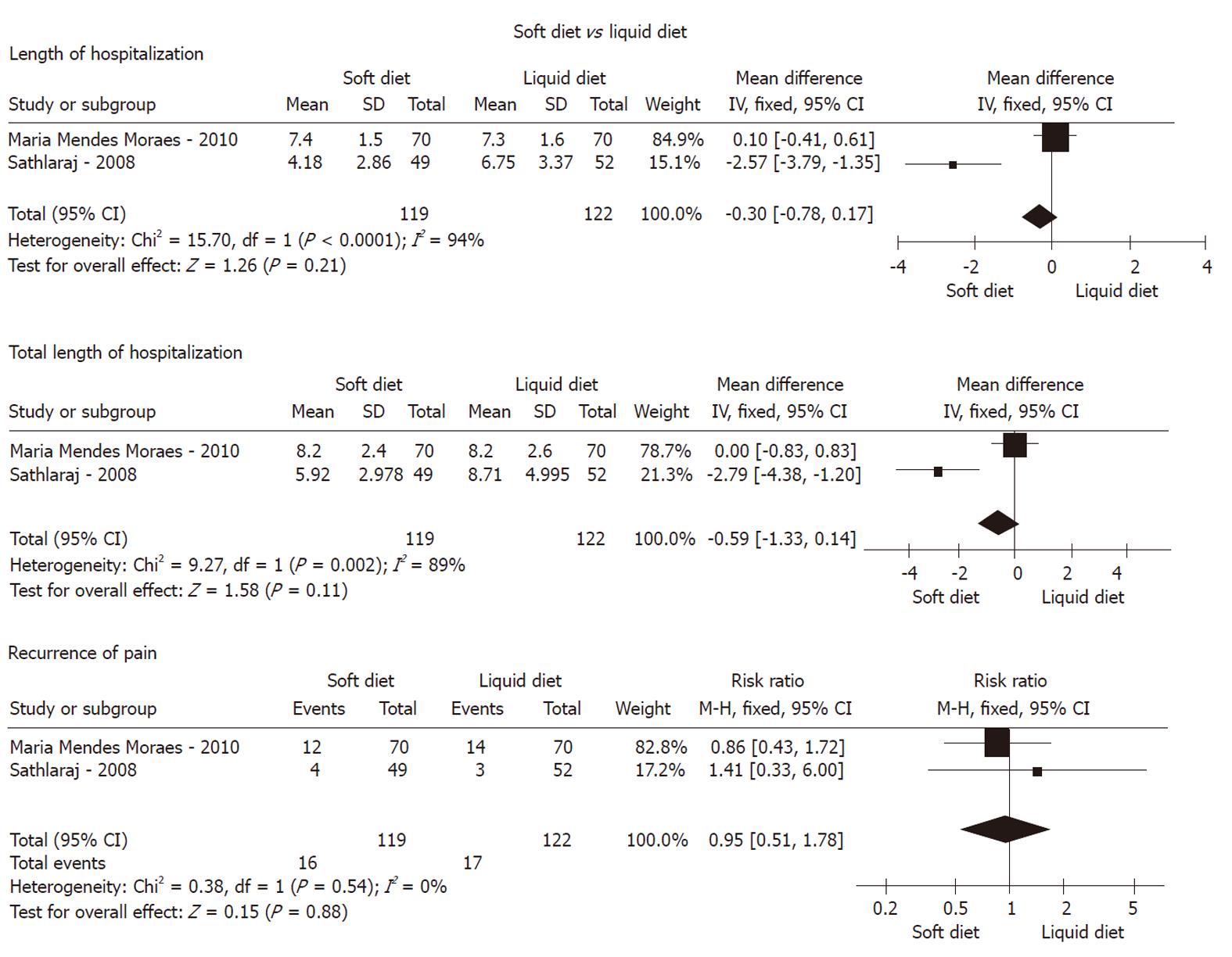 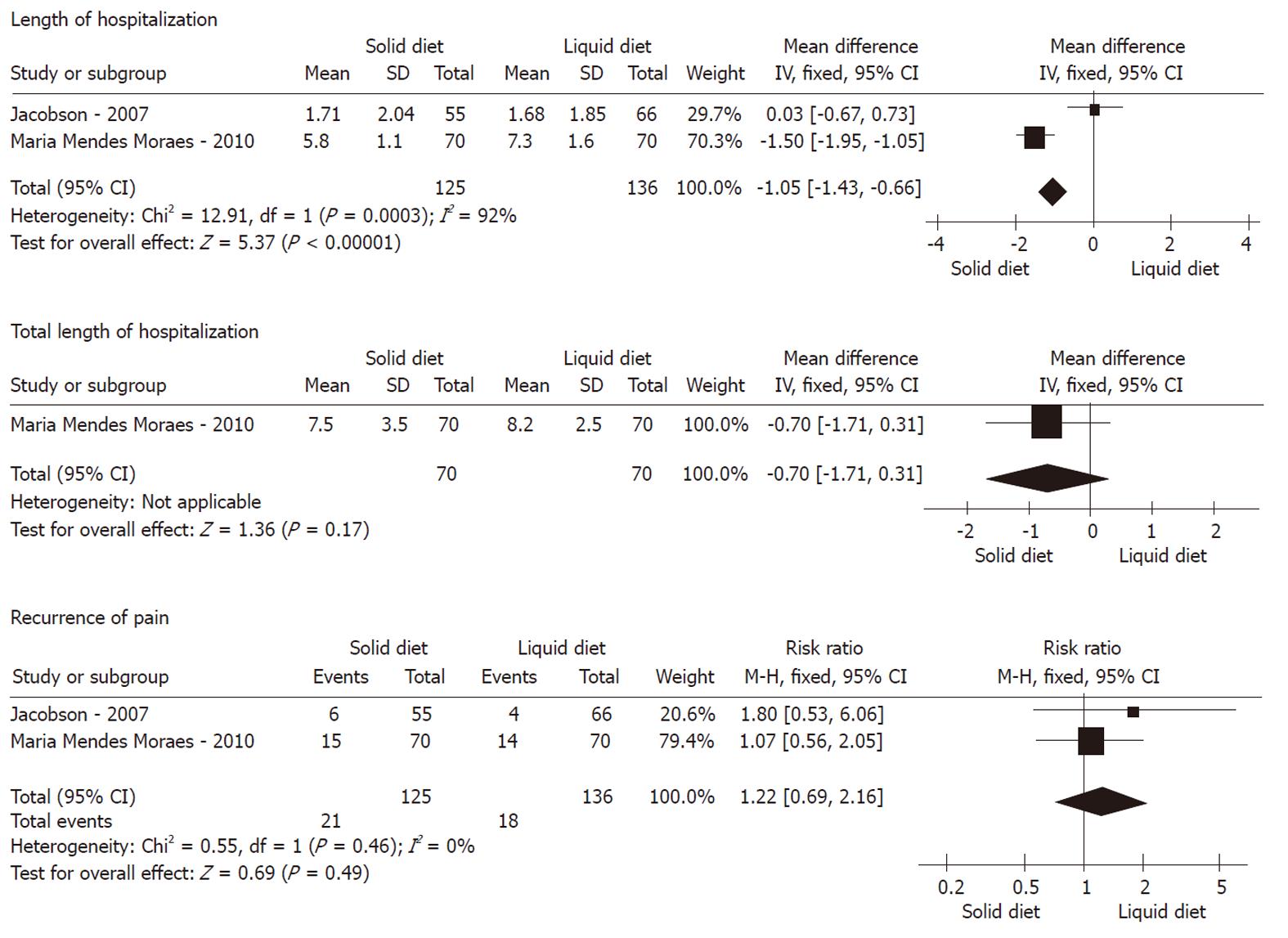 The current meta-analysis demonstrated that, compared with clear-liquid diet, non-liquid diet did not increase the recurrence of pain after re-feeding in mild acute pancreatitis, and this finding was supported by the subgroup analyses. These outcomes totally challenged our belief that solid diet, even soft diet, would definitely induce the recurrence of abdominal pain and increase pancreatic enzyme secretion[19-21]. Physicians had previously hypothesized that oral re-feeding could promote inflammatory processes in the pancreas and increase production of enteral hormones (such as cholecystokinin, motilin and serotonin), which have a negative trophic effect on the pancreatic tissue, thus decreasing pancreatic blood flow and gastrointestinal motility[22-25]. However, the meta-analysis did not show any significant difference between non-liquid and clear-liquid diets (RR: 1.22, 95% CI: 0.69-2.16; P = 0.49), as well as the two subgroups. There have only been a few studies on diet in acute pancreatitis thus far, therefore, it is possible to speculate that most of the patients could tolerate non-liquid diet successfully. Another key point was that our analysis only selected data from mild acute pancreatitis, with potentially severe types being excluded. The inclusion criteria of the three RCTs were similar. There was no significant heterogeneity between any of the groups.

Non-liquid diet, especially solid diet, showed superiority over clear-liquid diet on the LOH in the meta-analysis. Consequently, as compared to soft diet, solid diet supplement showed significant beneficial effects on both LOH and TLOH in patients with mild acute pancreatitis. Significant heterogeneity was found in the non-liquid diet vs the clear-liquid diet groups (P = 0.0001, I2 = 89%) and in the comparison of solid diet vs clear-liquid diet (P = 0.0003, I2 = 92%). This heterogeneity could have originated from discrepancies in the criteria for hospital discharge and the limited number of RCTs. Although practice management guidelines have presented detailed information concerning the appropriate timing and form of nutrition in severe acute pancreatitis, little attention has been paid to optimizing the dietary management of mild pancreatitis[4,14,26,27]. Earlier studies were not able to explain the benefits of soft or solid diet with fat re-feeding, or the patients’ tolerance. There is a viewpoint that the pancreas may be less responsive to stimulation by nutrients in normal digestive tract than when patients are suffering from pancreatitis[20,27].

One of the disadvantages of this meta-analysis was that only three RCTs were included. All three studies had high methodological quality and generalizability, nonetheless, there may still have been bias in the final results. There was one study from Brazil[15] for which we could not obtain accurate data for TLOH. Additionally, another study[16] that showed shorter LOH may have been related to the fast discharge protocol, which could have led to heterogeneity. Therefore, more multicenter cooperative studies with prospective design are needed.

To the best of our knowledge, many diseases can cause mild acute pancreatitis. The tolerant form of the different diets should be projected separately by disease. That is probably why there are always some patients who cannot tolerate re-feeding, hence prolonging LOH in patients with mild pancreatitis[28]. For example, if patients suffer from bile duct obstruction or infection, high pressure in the bile duct can cause deterioration of pancreatitis by increasing inflammation if the pressure is not released immediately[29-31]. In that situation, even a small load with any kind of diet could lead to serious consequences[32-34]. Therefore, treatment directed against the causes of pancreatitis is still an essential step. It is advisable to try and cure pancreatitis as soon as possible after the cause has been established, therefore, we should focus therapeutic options on the pathogenesis, in addition to the necessary supporting treatments; not only to ameliorate abdominal pain, but also to recover the whole function of the gastrointestinal tract. This will in turn improve the tolerance of the patients to earlier application of enteral nutritional therapy, thus reducing LOH. According to our meta-analysis, we obtained novel results that will encourage us to promote further new protocols with regard to dietary management of pancreatitis secondary to different protopathies. Also, more multicenter cooperative studies with prospective design are needed for ultimate conclusions about this issue.

In conclusion, the encouraging outcomes in this analysis may demonstrate a different notion from our previous experience in nutritional supplementation of the patients who are diagnosed with mild acute pancreatitis. None of the soft or solid non-liquid diets showed greater recurrence of pain after re-feeding, compared to the clear-liquid diet. Non-liquid diet nutritional supplementation, especially with solid diet, could reduce LOH and TLOH. At this point, we cannot explain our findings with previous pathophysiological experiments performed on acute pancreatitis. One possibility is that the upper digestive tract is less responsive to stimulation by nutrients than we assumed. However, new dietary experiments with animal models of acute pancreatitis and more RCTs comparing roles of different diet forms in the recovery of mild acute pancreatitis are expected to resolve these issues.

Early enteral nutrition therapy is important for management of mild acute pancreatitis. Initial treatment includes fasting in the first few days and administration of parenteral fluids, followed by gradual clear-liquid diet intake until abdominal pain has resolved and levels of pancreatic enzymes have decreased. Hospital discharge is usually planned on the basis of the patients’ tolerance to solid diet.

Some recent studies have suggested that oral re-feeding with soft or solid diet instead of clear liquids can be considered safe for recurrence of pain, but it inconsistently shortens length of hospitalization (LOH). Some randomized trials in mild acute pancreatitis have shown that non-liquid diets are both feasible and safe.

LOH means the minimum number of days that patients stay in hospital. TLOH is the total length of hospitalization.

Nutrition management of mild acute pancreatitis was the focus of the study. In the literature, comparison between total parenteral and enteral nutrition have been performed but not among different types of oral feeding. This study was unique in describing a carefully conducted meta-analysis comparing liquid, soft and solid diets. The conclusions are intriguing but sound. It potentially can improve the management of mild acute pancreatitis as well as further understanding of gastrointestinal physiology.