AIM: To determine the seroprevalence of anti-hepatitis A virus (HAV) antibodies in patients with chronic liver disease (CLD) and to justify the need for hepatitis A vaccination.

CONCLUSION: Our study demonstrated that patients aged greater than 30 years of age were likely to have natural immunity to hepatitis A. Therefore, hepatitis A vaccination may not be routinely required in this age group.

Hepatitis A remains a significant problem in Malaysia. Malaysia is among those countries reported to be of intermediate endemicity, along with Thailand and Sri Lanka[1-3]. The hepatitis A virus (HAV) has been reported to be the main cause of symptomatic clinical hepatitis (up to 66.4% in 1996) in the Eastern region of Peninsular Malaysia when compared to other causes of viral hepatitis[4]. Kelantan is one of the states situated in the Eastern region of Peninsular Malaysia. However, over the last 20 years, patterns of endemicity in South-East Asia have changed due to improvements in living standards, with some countries shifting from high to intermediate or intermediate to low endemicities[1,3,5-7]. The prevalence of HAV in Malaysia is expected to fall with time; this means, however, that reintroduction of the virus to a non-immune population could produce a community-level outbreak, which may lead to an increase in morbidity and mortality[2,8].

In the West, hepatitis A vaccination has been recommended in all patients with CLD to prevent super-infection with HAV, which may cause high morbidity and mortality in this group of patients[18-20]. However, in countries where hepatitis A is still endemic, such as Malaysia, the utility of this vaccine must be examined, as it is possible that most patients have already acquired natural immunity[21-23].

Therefore, we aimed to determine the seroprevalence of anti-HAV antibodies in patients with CLD in our region.

Patients with CLD (n = 119) attending the Gastroenterology Clinic of Universiti Sains Malaysia, Kelantan between July and September 2009 were enrolled after having signed written informed consents. Diagnosis of CLD was based on the presence of HBsAg or anti-hepatitis C virus antibody (anti-HCV) in serum for a period of at least 6 mo. The underlying liver diseases were classified into either liver cirrhosis (LC) or non-cirrhotic CLD. LC was evidenced by previous ultrasonography (i.e., coarse liver architecture, nodular liver surface and blunt liver edges) as well as confirmation of hypersplenism (i.e., splenomegaly on ultrasonography with a platelet count < 100 000/mm3)[3]. Patients with underlying CLD of non-viral origin were excluded.

Detection of HAV IgG, HBV and HCV infections

All data analyses were carried out using SPSS statistical software (Version 12.0.1). Continuous variables were expressed as mean and standard deviation for normally distributed data while categorical variables were expressed as frequency and percentage. A chi-square (χ2) test was used to determine whether significant differences exist between two categorical variables. Results were reported as significant when P < 0.05. For multivariate analyses, a stepwise multivariate logistic regression model was employed to assess the relative importance of variables showing a significant association (P < 0.05) or any other clinically important variables in univariate analysis (P < 0.10). Results of all multivariable analyses were reported as adjusted odds ratio, 95% CI and exact P value.

The mean age at presentation was 44.4 ± 14 years (range 21-76 years). Males comprised the majority of the study population (62.2%). The Malay constituted the highest proportion of the study subjects (80.7%). This distribution reflects the current ethnic diversity in our population.

The aetiology of the underlying liver disease was chronic HBV infection in 96 (80.7%) patients, while chronic HCV infection was present in the remainder of the population (19.3%). The distribution of disease status was LC (14.3%), while others were in the non-cirrhotic group (Table 1). 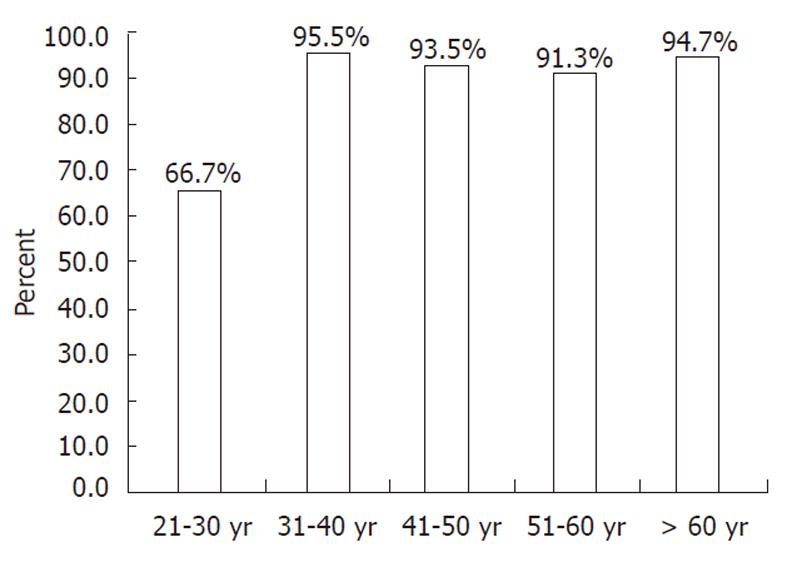 Figure 1 Seropositivity of anti-hepatitis A virus IgG according to age groups.

A study by Ton et al[24] investigated 100 healthy individuals from Kuala Lumpur in 1983 and reported a seroprevalence of hepatitis A of 78.2%. In 1985, a study reported that 100% of a Malaysian population were anti-HAV positive by 30 years of age[25]. However, in 1992, only 45% of the same age group were antibody-positive, indicating a shifting epidemiology, most probably due to improvements in living standards[25]. In the present study, we found that the overall anti-HAV seropositivity was high, at 88.2%. The higher seroprevalence of hepatitis A in our chronic viral hepatitis patients compared to previously reported seroprevalence for normal individuals was most likely related to the characteristics of the studied population in this region. This study was conducted in Kelantan, which is located in the north-eastern corner of the peninsula facing the South China Sea, with a chiefly agrarian economy. The population has diverse socioeconomic status and large income inequalities. The previous study was conducted in Malaysia’s capital, Kuala Lumpur[24], which has higher living standards, while the other included paediatric age groups with lower expected natural immunity[26]. Therefore, it is possible that the seroprevalence of HAV in other parts of Malaysia might not be similar to our findings, and we recommend further study in each locality to determine this. It is also possible that CLD patients have a higher prevalence of HAV positivity than the normal population. Contradicting this, Joshi and colleagues have revealed similar hepatitis A seroprevalence differences between CLD and normal populations in India[21].

We also show that the main factor that influences the rate of positivity is the age group. The seroprevalence rates in patients in Groups B, C, D and E were greater than 90%, compared to only 66.7% in patients belonging to Group A. These data imply that most patients with chronic viral liver disease who are greater than 30 years of age may have been exposed to HAV infection and have therefore already acquired natural immunity towards the disease. Therefore, routine HAV vaccination cannot be recommended in this age group. However, there remains the need to vaccinate patients aged less than 30 years with chronic liver disease.

Malaysia is a multiracial country consisting of three major ethnic groups: Malay, Chinese and Indian. Because the Indian population is generally very small in Kelantan, we did not manage to enrol any Indian patients, and only the Malay and Chinese races could be compared. There was no significant difference in the seroprevalence rate between these two ethnicities. However, this should be interpreted with caution, as various sociocultural behaviours may also play a role in influencing viral transmission rates.

All cirrhotic patients were anti-HAV positive, compared to only 86.3% in non-cirrhotic liver disease cases. The higher prevalence in cirrhotics was due to these patients falling into an older age group (mean age 52.4 ± 13.4) than non-cirrhotics (mean age 43.06 ± 13.7), as shown by multiple logistic regression analyses. Various studies, particularly those in highly endemic regions such as India, have demonstrated that the majority of cirrhotic patients of any aetiology are positive for anti-HAV IgG. A study from New Delhi revealed that 97.6% of cirrhotics (248/288) were found to be positive for anti-HAV[28]. Another study from South India demonstrated that 51 out of 52 patients with cirrhosis had antibodies towards HAV[29]. All these studies proposed that the higher seroprevalence of anti-HAV IgG in cirrhotic patients was actually related to increased age. Our findings are in agreement with the results of these studies.

Our study demonstrated that the overall hepatitis A seroprevalence was higher in CLD patients in Kelantan compared to the previously determined prevalence in normal individuals in other parts of Malaysia. Age was the most important factor in determining anti-HAV positivity, and most patients greater than 30 years of age were likely to have natural immunity.

We would like to thank Dr. Habsah Hasan for her skilful help in conducting the anti-HAV IgG tests.

Populations in developed countries may not have had prior exposure to hepatitis A virus (HAV) and, therefore, no natural immunity; thus, there is a need for hepatitis A vaccination in selected high-risk groups. In view of this, Western guidelines advocate hepatitis A vaccination for those with chronic liver disease (CLD), as infection may lead to further deterioration of liver function, which can then cause significant morbidity and mortality amongst these patients.

Over the last 20 years, patterns of endemicity in South East Asia have changed due to improvements in living standards, with some countries shifting from high to intermediate or intermediate to low endemicity. The question remains as to the importance of hepatitis A vaccination amongst hepatitis B and C CLD patients in Malaysia, a country of intermediate endemicity for hepatitis A. To answer this, a research team from Universiti Sains Malaysia determined the prevalence and associated factors of natural immunity towards hepatitis A amongst these patients in the eastern region of Peninsular Malaysia.

The study demonstrated that the overall prevalence of natural immunity towards hepatitis A was high (88%). There was a statistically significant difference when the data were broken down according to age. Results revealed that hepatitis B and C CLD patients less than 30 years of age were significantly less likely to have a natural immunity towards hepatitis A. This implies that although hepatitis A vaccination is not needed for the majority of CLD patients, a subset of patients (particularly patients who are younger than 30 years old) will still benefit from being vaccinated.

Study results show that for north-eastern Peninsular Malaysia, there is currently no need for routine hepatitis A vaccination amongst hepatitis B and C CLD patients. However, CLD patients who are younger than 30 years of age will still benefit from being vaccinated. Patterns of endemicity in South East Asian countries are expected to change; in Malaysia, the prevalence of hepatitis A viral exposure is expected to fall with time. Thus, there is a need to repeat this study in the future, as it is expected that the prevalence of natural immunity towards hepatitis A will fall as the country becomes more developed.

The authors investigated the seroprevalence of anti-HAV antibodies in patients with CLD and the need for vaccination in the region of Kelantan, Malaysia.