AIM: To analyse the possible association of various Helicobacter species and certain common gut bacteria in patients with Meckel’s diverticulum and appendicitis.

METHODS: A nested-polymerase chain reaction (PCR), specific to 16S rRNA of the Helicobacter genus, was performed on paraffin embedded samples, 50 with acute appendicitis, 50 normal appendixes, and 33 Meckel’s diverticulum with gastric heterotopia and/or ulcer. Helicobacter genus positive samples were sequenced for species identification. All samples were also analysed for certain gut bacteria by PCR.

CONCLUSION: Helicobacter is not an etiological agent in the pathogenesis of symptomatic Meckel’s diverticulum or in acute appendicitis.

Although the stomach is the most frequent site of Helicobacter pylori (H. pylori) infection, H. pylori and enterohepatic Helicobacter spp. (EHS) have also been associated with extragastric diseases[1].

Meckel’s diverticulum (MD) is the most common developmental anomaly of the gastrointestinal tract and is present in 1%-2% of the general population. It often contains ectopic tissue, notably gastric and pancreatic tissue[2]. Gastric mucosa is found in 10%-25% of MD and may be associated with inflammation, ulceration, gastrointestinal bleeding, and perforation[3-5]. H. pylori has been demonstrated in the ectopic gastric epithelium within MD[6]. Campylobacter-like organisms in MD were first reported in 1989[7-9]. However, conflicting results were reported concerning colonisation by H. pylori of such ectopic mucosa[10,11]. There has been no study that investigated EHS in MD.

Acute appendicitis is the most common abdominal surgical emergency and can be seen in all ages, especially in those younger than 30 years[12]. However, the aetiology of acute appendicitis is uncertain, and diagnosis is often difficult. There have been some investigations of H. pylori in appendix tissue[13-15], but none that investigated non-pylori Helicobacters.

We hypothesized that non-pylori Helicobacters, such as enterohepatic Helicobacters, might be associated with these diseases. Most studies have investigated only H. pylori in MD and the appendix and mostly used non-molecular biological techniques; therefore, we aimed to analyse gastric, EHS and certain common gut bacteria in appendicitis and MD patients by genus specific polymerase chain reaction (PCR) and sequencing.

MATERIALS AND METHODS
Patients and histology

We re-examined all MD patients from 1990-2009 taken from the files of the Department of Pathology, Lund University Hospital. Thirty-three MD patients (two cases of ulcer without heterotopia, 31 cases with gastric heterotopia, of which seven also had an ulcer) (mean age: 11 years; range: 4 wk-73 years; 26 male, 7 female) were included in our study. Abdominal pain was the reason for operation in 16 cases, two of whom had acute appendicitis and one enlarged lymph nodes, nine were operated upon because of gastrointestinal bleeding and six for other abdominal diseases. No indication was given in two of the cases. Histological sections from stored paraffin blocks were stained with Alcian blue-periodic acid Schiff (AB-PAS) pH 2.5, Whartin-Starry silver stain and immunostained with an anti-H. pylori antibody (DAKO, Glostrup, Denmark, diluted 1:300).

From the cases of MD, heterotopic mucosa of the gastric as well as the antral type were obtained from the paraffin blocks for PCR-assay with the tip of a scalpel. Ulcers were examined separately. In the case positive for Helicobacter DNA, the intestinal type mucosa surrounding the heterotopia was also studied. Corresponding areas from appendix samples of mucosa, or of necrotic appendicitis were sampled for PCR. It was not possible to avoid including material from the appendical lumen in these samples. In the cases positive for Helicobacter DNA, other tissues removed at the same operation were also examined by PCR.

DNA was extracted from the paraffin-embedded tissue samples by de-embedding, as previously described[1]. DNA was extracted by a QIAamp DNA Mini Kit Tissue protocol (Qiagen, Hilden, Germany) according to the manufacturer’s instructions.

PCR specific for Enterobacteriaceae, the Bacterioides-Prevotella group, and Enterococcus were performed. The reaction mixture and amplification conditions, except for annealing temperatures, for non-Helicobacter PCR assays were the same as in the first step of the semi-nested Helicobacter PCR. The annealing temperatures and primers used for detection of Enterobacteriaceae, Bacterioides-prevotella group, and Enterococcus were as described by Karagin et al[1] 2010. As positive controls, Escherchia coli (CCUG 17620), Bacteroides fragilis (CCUG 4856), and Enterococcus faecalis (CCUG 9997) were used in all PCR reactions. The 112-bp PCR product of Enterococcus, the 418-bp product of Bacteroides, and the 195-bp product of Enterobacteriaceae were visualized by 1.3% agarose gel electrophoresis.

The study was approved by the Research Ethics Committee at Lund University, permit number 588/2006.

The most dominant heterotopia seen in MD was of the corpus type with, in most cases, small areas of antral heterotopia. It was therefore easy to include both types of heterotopia, if present, in the same sample. No Helicobacter was found by histological and immunohistological examinations, neither in heterotopia nor in ulcus. In 3/33 of the MD cases, a mild chronic inflammation in the heterotopic area with slightly increased amounts of lymphocytes was seen. The ulcer was infiltrated with polymorphonuclear cells but there was no general, active gastritis. The normal intestinal mucosa in the MD outside the heterotopia did not have an increased amount of lympathic tissue, in except the Helicobacter pullorum (H. pullorum) positive case. The nine ulcers and their surrounding mucosa were negative for Helicobacter DNA.

One of the heterotopic mucosa specimens was positive for Helicobacter DNA, namely that from a 44-year-old male. He was operated on for acute appendicitis. The appendix was not sent for histological analysis. The MD was also removed. Histology displayed a few gastric glands of the corpus type and a small strip of surface epithelium of the gastric type. There were a moderate number of lymphocytes and plasma cells in the heterotopic area. The surrounding mucosa of the intestinal type displayed an unusually well developed lymphatic tissue with germinal centres, a predominance of lymphocytes, and very few polymorphonuclear cells (Figure 1). There was no Helicobacter DNA detected by PCR in this sample. 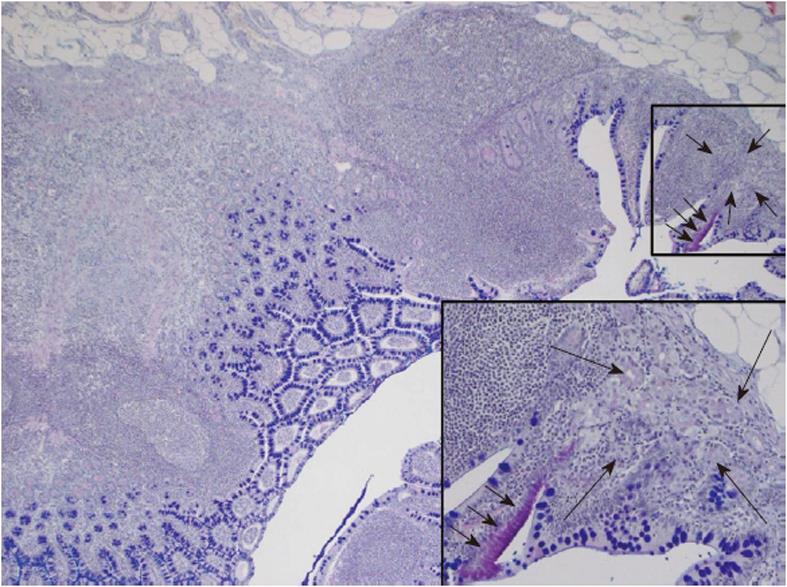 Figure 1 Microscopic analysis of the Helicobacter pullorum positive Meckel´s diverticulum case. Low power view of a histological section from Meckel´s diverticulum, positive for Helicobacter pullorum (H. pullorum) DNA, in the heterotopic area. There is an unusually well developed lymphatic tissue with germinal centres and a predominance of lymphocytes in the non-heterotopic area. Plasma cells were mainly found in the heterotopic area. The small arrows in the big square, point to a small strip of gastric heterotopia. This area displays at higher magnification in the inset. Large arrows point to gastric glands of corpus type. Blue without arrows in the photo indicates intestinal mucus. Alcian blue-PAS staining pH 2.5.

Three normal appendixes were positive for Helicobacter DNA: from one an 18-year-old female with suspicion of appendicitis, one from a 63-year-old male with colon adenoma, one from a 55-year-old male with colon diverticulitis. Adenoma, diverticulitis, and normal colon tissue removed from the two latter patients were negative for Helicobacter. No tissue other than the appendix was removed from the first patient. All cases revealed H. pylori on sequence analysis. There was no gastric metaplasia in any of the appendixes, and no immunopositive H. pylori structures in the mucosa of the samples that were PCR-positive for Helicobacter.

PCR detection of bacterial DNA other than Helicobacter

Using the Enterobacteria specific PCR assay and agarose gel electrophoresis, Enterobacteria spp. was detected in 10/50 (20%) acute appendicitis cases and 8/50 (16%) normal appendixes. There were 7/50 (14%) and 12/50 (24%) samples that were positive for Bacteroides spp., among the acute appendicitis and normal appendix sample, respectively. However, all MD and appendix samples were negative for Enterococcus spp. MD samples were also negative for Bacteroides; however, 2/33 (6%) were positive for Enterobacteria spp.

In this study, we screened for the presence of DNA of Helicobacter spp. and certain common intestinal bacteria by PCR in MD with gastric heterotopia and in appendix samples. We detected H. pullorum DNA in one out of 33 MD cases (3%) and Enterobacteria in two (6%). No Enterococus or Bacteroides were found in the MD cases.

The H. pullorum case was positive only in the heterotopic area, not in the surrounding diverticulum mucosa of the intestinal type. No luminal contents were seen in these samples. This argues for the interpretation that the H. pullorum DNA originated from the heterotopic mucosa and not from the lumen. This assumption is further strengthened by the very low prevalence of other bacterial DNA in the MD samples. H. pullorum has, however, been described in stools from cases with gastroenteritis[17], but our patient did not have such symptoms.

No Helicobacter was seen by immunohistochemistry. However, PCR is a more sensitive method and does not require intact bacteria. Our PCR technique is considered to be highly reliable for genus identification of Helicobacter spp.[18,19]. Some authors have found H. pylori by immunohistochemistry in MD with active gastritis, implying the presence of polymorphonuclear cells; the prevalence varied between 2 and 28%[6-8,20-23]. We had no cases with such inflammation and found no H. pylori DNA.

Interestingly, there was an increased amount of lymphatic tissue in the intestinal type mucosa of the H. pullorum positive case. However, no conclusions can be drawn from just one case.

EHS are known to cause inflammatory bowel diseases[24,25]. We have previously found H. pullorum DNA in cholecystitis samples with gastric metaplasia[1]. Perhaps H. pullorum has some preference for the gastric epithelium.

In conclusion, H. pullorum has, for the first time, been detected by PCR in MD patients with gastric heterotopias. However, there is no association between H. pullorum and MD pathogenesis. Moreover, H. pylori has no role in the aetiology of acute appendicitis. Its presence might have been that of a passenger.

Helicobacter-like bacteria in Meckel´s diverticulum (MD) have been reported by histological methods. However, no study has reported Helicobacter DNA in such specimens by polymerase chain reaction(PCR) and there is some doubt as to the presence of Helicobacter in patients with appendicitis.

By understanding the role of Helicobacters in the pathology of Meckel’s diverticulum and appendicitis, this study could represent a future strategy for further pathological studies.

Enterohepatic Helicobacter spp. (EHS) are the species of the genus Helicobacter that colonize the hepatobiliary tract and can cause extragastric diseases in humans or in animals.

This work has been had the objective of seeking any association between Helicobacter species other than H. pylori with Meckel’s diverticulum by very sensitive method, i.e., Nested PCR. Most previous studies were based on conventional methods, such as culture isolation, whereas in this study, the authors have used molecular techniques. Although they did not find any association between MD and Helicobacter species, it does not undermine the importance of the study.