RESULTS: DSS produced submucosal erosions, ulcers, inflammatory cell infiltration and cryptic abscesses which were reduced in both groups of mice receiving either anti-TNFα alone or combined with zinc. The effect was more pronounced in the latter group (vs Zn diet, P < 0.02). Myeloperoxidase activity (vs controls, P < 0.02) and DNA adducts, greatly elevated in the DSS fed colitis group (vs controls, P < 0.05), were significantly reduced in the treated groups, with a more remarkable effect in the group receiving combined therapy (vs standard diet, P < 0.04).

Novel treatment strategies based on the inhibition of TNFα have shown to be effective both in experimental models of colitis[6] and in inducing and maintaining remission in humans affected with inflammatory bowel disease[7]. However, as these therapies are very expensive they may represent an important and unaffordable economic burden in the near future.

Trace element metabolism is altered during inflammatory processes of the gastrointestinal tract. Zinc is essential for intestinal homeostasis, since there are several zinc-dependent antioxidant enzymes such as superoxide dismutase which converts superoxide to hydrogen peroxide and metallothionein which can neutralize free radical production. Moreover, zinc status affects gene expression of the inflammatory cytokines TNF, IL-1B and IL-8. Zinc deficiency causes functional defects in T cells, neutrophils and macrophages, and positive modulatory responses are produced following zinc supplementation[8]. In the model of acetic acid-induced ulcerations, zinc reduced mucosal damage[9]. In models of experimental colitis both oral and topical zinc treatment were found to decrease intestinal inflammation, to favour mucosal healing and to improve immune function[10], We therefore thought that zinc may be useful if added to conventional anti-TNFα therapy in modulating the symptoms of dextran sodium sulphate (DSS)-induced colitis in mice and in decreasing oxidative stress.

Male CD1 Swiss mice, 4 wk old, weighing 20-25 g purchased from Charles River (Calco, Italy) were used in this study. The animals were kept in plastic platform cages in a temperature controlled room (22 °C) under a 12-h light-dark cycle, with free access to water and standard chow containing 125 mg/kg zinc oxide. The experimental protocol was approved by the Veterinary and Health Committee of the University of Padua.

Mice were fed 5% DSS (5% dextran sulphate solution purchased from ICN Pharmaceuticals, SRL, Italy) dissolved in drinking water in one single cycle to induce acute colitis. The cycle consisted of administering 5% DSS for 7 d which caused loose stools in all animals and the presence of gross rectal bleeding in about 50% of the animals.

Macroscopic and histologic features of colitis

Damage was assessed macroscopically by scoring the number and extent of ulcers, adhesions, and thickness of the colonic wall[11] and histologically by scoring cryptitis, crypt abscesses and epithelial injury. Colonic tissue samples were obtained and processed for myeloperoxidase and 8-hydroxydeoxyguanosine (8-OHdG) in order to quantify inflammation and DNA damage.

Colonic samples were immediately fixed in buffered formalin (10%). After fixation, the specimens were routinely processed and embedded in paraffin. Serial histology sections of 4 μm thickness were obtained from each paraffin block and mounted on poly-L-lysine coated slides. Sections were stained with haematoxylin-eosin and examined blindly.

Assessment of myeloperoxidase (MPO) activity was assessed according to the method previously described[14]. Briefly, colonic tissue samples were minced in 1 mL of 50 mmol/L potassium phosphate buffer (pH = 6.0) containing 14 mmol/L hexadecyltrimethylammonium bromide (Fluka), homogenized and sonicated. The lysates were frozen and thawed thrice, then centrifuged for 2 min in cold at 1 5000 g. Aliquots of the supernatants were mixed with potassium phosphate buffer containing o-dianisidine-HCl (Sigma-Aldrich, St. Louis, MO, United States) and 0.0005% H2O2. MPO activity was expressed as units/g of wet tissue. The enzyme unit was defined as the conversion of 1 mol of H2O2 per min at 25.

Oxidative DNA damage was assessed following previously described methods[15]. Briefly, colonic biopsy specimens were thawed, homogenized in a separation buffer and approximately 20 μg of purified DNA per sample was injected into the HPLC system (Shimadzu, Kyoto, Japan). The 8-OHdG was detected using an electrochemical detector (ESA Coulochem II 5200A, Bedford, MA, Untied States). The levels of 8-OHdG were expressed as the number of 8-OHdG adducts per 105 dG bases. The coefficient of variation was < 10%; 100 μg of DNA were required for the determination.

Data are expressed as median (interquartile range). Statistical data were analyzed with Mann-Whitney U test for comparison of the groups and Spearman’s rank correlation test. P values less than 0.05 were considered significant.

Determination of oxidative damage as measured by 8-OHdG mucosal levels 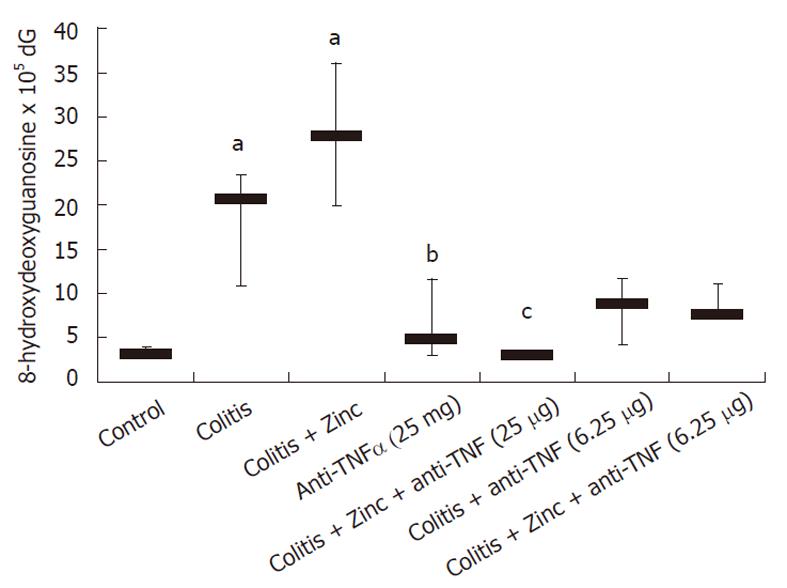 Zinc metabolism has been reported to be reduced in about 65% of patients with Crohn’s disease. In an experimental model of colitis we also reported that zinc supplementation induced metallothionein expression, while having little effect on the short-term course of colitis[16]. Zinc has several potential mechanisms of action which can benefit the inflammatory process. It regulated tight junction permeability in an experimental model of colitis[17] and in Crohn disease[18]. Sturniolo et al[19] reported that zinc sulphate enemas exert an anti-inflammatory action on experimental colitis.

In the last few years, biological therapies have changed the pharmacological armamentarium of inflammatory bowel disease therapy: the first and still most widely used drug is the anti-TNFα monoclonal antibody, infliximab[20]. Even in experimental models of colitis, the subcutaneous administration of infliximab reduced the inflammatory activity as well as tissue TNFα concentration[21]. Our experimental approach which added zinc acetate to the diet while administering anti-TNFα monoclonal antibody, aimed to examine the effects on DSS-induced colitis in mice.

The mucosa did not show complete healing probably because the treatment effects were evaluated 48 h after treatment. Nevertheless, therapy with anti-TNFα ameliorated the macroscopic and histological aspects and decreased myeloperoxidase concentration. Similar results were reported by Videla et al[22] who found that anti-TNFα significantly reduced the release of inflammatory mediators and induced histopathological remission in a model of experimental colitis. Zinc alone had little effect in ameliorating the severity of acute colitis induced by intra-rectal instillation of dinitrobenzene-sulphonic acid in rats, even though Tran et al[23] and Luk et al[24] recently reported some therapeutic effects of zinc supplementation in DSS-induced colitis in mice.

Zinc supplementation alone worsened the histopathological and biochemical aspects of colitis compared to colitis alone and this can be explained by the fact that superoxide dismutase by itself is a pro-oxidant enzyme by virtue of its ability to generate hydrogen peroxide[25,26]. This may explain why a worsening of colitis was recorded when zinc was added alone. However, in our study zinc allowed us to reduce the dose of anti-TNFα maintaining the same biochemical and morphological effects.

Acute colitis is characterised by an increased production of free radicals which contribute to protein, DNA chain and lipid damage. As the antioxidant potential of colonic epithelial cells is quite low, this results in tissue injury[27]. The administration of antioxidants thus has the potential to improve the outcome of experimental colitis by scavenging free radicals. In our experimental conditions, the oxidative damage, expressed by DNA adducts was significantly reduced in the groups treated with anti-TNFα confirming the findings of Popivanova et al[28]. In our study, the effect of anti-TNFα on oxidative stress appeared to be dose-dependent with the highest dose having the strongest effect in reducing oxidative damage, and the combination of anti-TNFα and zinc supplementation added little effect.

Obermeier et al[29] reported that excess nitric oxide formation occurs in experimental colitis and can be decreased by treatment with rat anti-mouse TNF and interferon gamma monoclonal antibodies. In several studies, zinc supplementation ameliorated antioxidant concentrations thus reducing the production of oxidative species[27-30]. In the present study, zinc supplementation allowed a reduction in the dose of anti-TNFα antibody, while maintaining the same level of reduced intestinal inflammation observed with a higher dose of anti-TNFα antibody alone, as quantified by the four parameters of tissue inflammation utilized in the study. This effect is in accordance with the described capability of zinc to increase antioxidant concentration and reduce oxidative species.

In conclusion, the combined administration of zinc acetate in the diet along with the systemic administration of anti-TNFα had a positive effect in reducing the severity of DSS-induced colitis in mice, with reduced production of DNA adducts. Moreover, the same effect was demonstrated with the reduced anti-TNFα dose combined with zinc. This experimental approach offers the advantage of reducing the potential side effects of anti-TNFα and costs, while ameliorating oxidative stress and inflammation in patients with inflammatory bowel disease.

Dextran sodium sulphate (DSS) colitis is a well-known model of inflammatory bowel disease in which the authors tested the effect of the well-known drug anti-tumour necrosis factor α (TNFα) combined with zinc with the aim of evaluating the possibility of lowering the dose of anti-TNFα.

In this article the authors explore the possibility of a combination therapy in inflammatory bowel disease (IBD) in order to reduce potential side effects and costs.

The potential applications include the possibility of adding zinc to anti-TNFα therapy. Moreover, future perspectives include the application of other combination therapies in inflammatory bowel disease.

This study considers the investigation of the role of combined administration of Zinc acetate in the diet with systemic administration of anti TNF alfa on the effect of the severity of experimental colitis in mice induced by DSS. The study is set up correctly. The paper is written sufficiently good, the Introduction give a good overview about the study background and the authors raised clearly the hypothesis of the study. The description of methods used is accurate. The results are presented clearly and have been discussed well, the table and figure give good overview about the results.