Pancreatic fistula is a common complication of distal pancreatectomy; although various surgical procedures have been proposed, no clear advantage is evident for a single technique. We herein report the case of a 38-year-old patient affected by an advanced gastric carcinoma infiltrating the pancreas body, with extensive nodal metastases involving the celiac trunk, who underwent total gastrectomy with lymphadenectomy, distal pancreatectomy and resection en bloc of the celiac trunk (Appleby operation). At the end of the demolitive phase, the pancreatic stump and the aorta at the level of the celiac ligature were covered with a layer of Tachosil®, a horse collagen sponge made with human coagulation factors (fibrinogen and thrombin). Presenting this case, we wish to highlight the possible sealing effect of this product and hypothesize a role in preventing pancreatic fistula and postoperative lymphorrhagia from extensive nodal dissection.

Even though several technical solutions have been proposed, pancreatic fistula remains a frequent complication after distal pancreatectomy, ranging in incidence from 15% to 40%[1,2]. Almost all serious postoperative sequelae can be ascribed to this complication, and hospitalization times are significantly longer. In the cases in which distal pancreatic resection is only a part of a more complicated, usually oncological, surgical operation, the occurrence of a fistula containing large amounts of proteolytic enzymes can endanger the integrity of visceral sutures and lead to the contamination of prosthetic material, if present. The performance of extensive lymphadenectomy represents an additional risk factor for possible infection of fluids coming from lymphorrhagia. In these cases, achieving a completely dry pancreatic stump and an optimal lymphostasis is a very important goal. No clear evidence is given in the literature with regard to both aspects: there is no indication of a technique or a method guaranteeing a higher level of success.

We would like to report a clinical case during which we successfully experimented with a collagen-based biological glue which had originally been proposed as a hemostatic means. We applied it as a sealer on the pancreatic stump after distal resection and on the aorta after a periaortic lymphadenectomy removing the celiac trunk in a young patient affected by advanced gastric carcinoma.

A 38-year-old male patient was affected by an averagely differentiated intestinal adenocarcinoma of the esophago-gastric junction recently complicated by a digestive hemorrhage. Multiphase computed tomography (CT) scan showed that the neoplasm had extended to the pancreatic body with an extensive lymph nodal involvement along the left gastric artery which was completely encompassed as far as the celiac trunk. The contact between the celiac trunk and the larger node (3.5 cm) corresponded to 180 degrees (Figure 1). Neoadjuvant chemotherapy with epirubicin, cisplatin, fluorouracil (ECF) cycles was undergone according to the formerly validated protocol[3]. The restaging CT scan showed a stability of the radiological picture, with no evident regression of the adenopathies along the small curvature and the celiac trunk. We decided therefore to proceed with a demolition surgery. The surgical exploration revealed neither peritoneal carcinosis nor hepatic metastases and confirmed the extensive nodal involvement of the proper hepatic artery and the celiac tripod, the origin of which from the aorta was free (Figure 2). We performed a temporary clamping test of the common hepatic artery and kept the hepatic arterial perfusion under control by inverting the flow of the gastroduodenal artery. We then proceeded to a total gastrectomy and to a distal spleno-pancreatectomy (the pancreas was sectioned by green stitches and a 60 mm GIA stapler), to left adrenalectomy and to en bloc removal of perigastric nodes and of the celiac artery (Appleby operation)[4]. The intervention was then completed by performing a lymphadenectomy of the hepatic pedicle, of the rear-pancreatic and of the interaorto-caval basins. Gastroenteric continuity was restored by mechanical termino-lateral esophago-digiunostomy using a defunctionalized Roux-en-Y loop. The pancreatic stump was then covered with a layer of Tachosil®; a further layer of the same material was then applied to the aorta at the level of the celiac ligature (Figure 3). 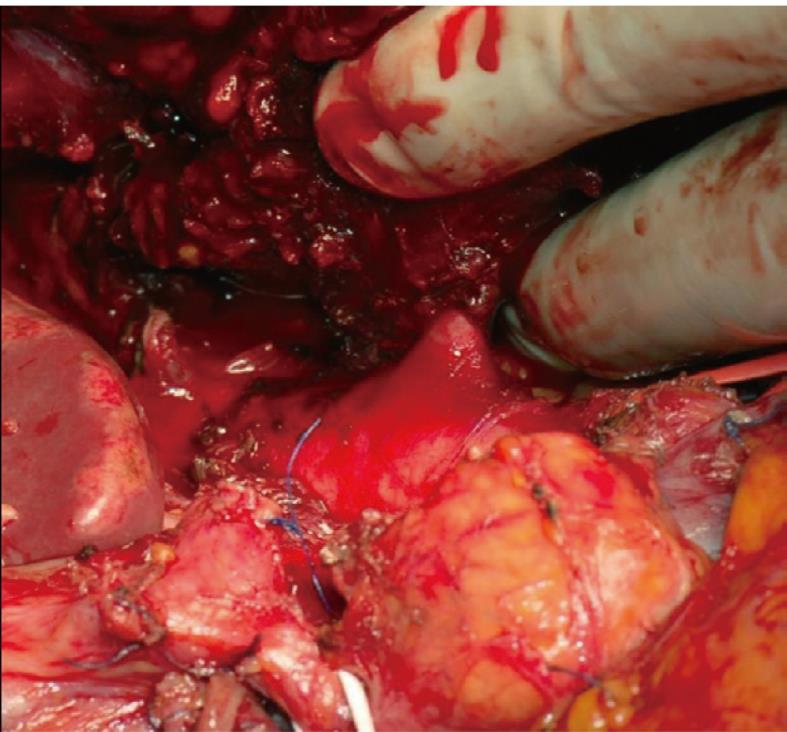 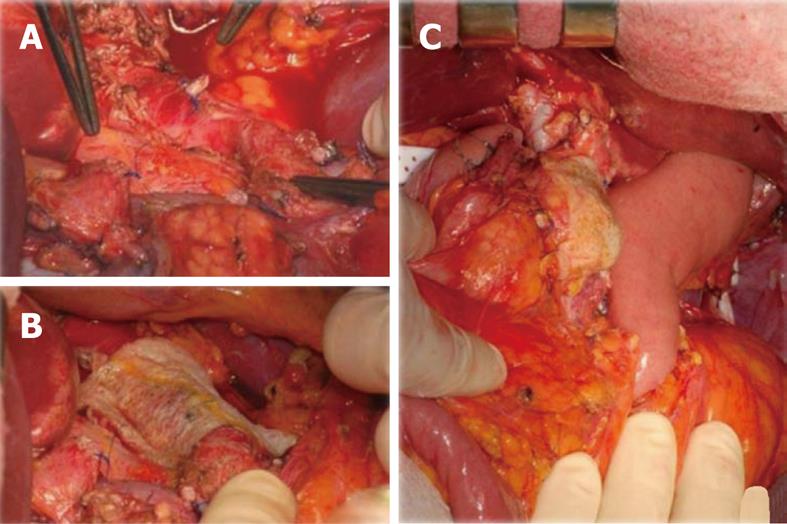 Figure 3 Intraoperative findings after the demolitive phase. A: From the left, the distal hepatic artery stump, the celiac stump and the superior mesenteric artery; B, C: Tachosil® is then applied over the aorta (B) and over the pancreas stump (C).

The postoperative course was uneventful and the patient left the hospital on the 15th day after surgery. Daily monitoring of the hepatic function did not reveal functional insufficiencies and the increase in cytolysis values was low (AST 92 U/dL, ALT 89 U/dL; normal values < 50 U/dL) and transitory. The outcome of the 3 abdominal drains was always lower than 50 mL/d; the enzymatic dosage in the drained liquid showed a pathological value only on the 1st postoperative day (1500 U/dL; normal value < 286 U/dL), which, according to recent publications[5], does not indicate the presence of pancreatic fistula. It then dropped to normal values (< 35 U/dL starting from the 4th day). Serum lipases were always normal.

The final pathological report indicated an intestinal type gastric adenocarcinoma of the cardias, infiltrating the whole thickness of the wall and extending to the perigastric adipose tissue, directly infiltrating the pancreatic body, the hepatic artery and the left adrenal gland. Lymph node metastases were present in 19 out of 51 removed nodes (pT4N3M0, stage IV). The patient therefore underwent 3 further adjuvant chemotherapy cycles using EFC. After 17 mo the patient developed multiple hepatic metastases treated with a further chemotherapy cycle and died 23 mo after surgery.

Distal pancreatectomy involves a higher risk of pancreatic fistulas than duodeno-pancreatectomy. Even though these are “pure” pancreatic fistulas, subsequent complications have a significant effect on the patient postoperative course. It is commonly believed that, along with the clear role played by the structure and consistency of the pancreas, the main risk factors for fistula are the technique used for sectioning the pancreas neck and the treatment of the residual stump. Up to the present, no standardized procedure has been defined[6]. Several technical proposals have been presented, often employed in an insufficient number of cases; furthermore, patient selection bias and a non-homogeneous definition of the primary end-point (clinical or biochemical pancreatic fistula with different cut-offs in terms of enzymatic values on different postoperative days)[7] are quite evident. Also, the potentially influential effect of the experience of the surgeon, which, in itself, seems to produce great divergence in results even when the same technique is being used, must be taken into consideration.

The reported clinical case presents some interesting elements; the neoplasm affected the stomach and involved the pancreas as a direct infiltration, with an extensive lymph node involvement mainly along the vascular axes. The clear infiltration of the proper hepatic artery, of the celiac trunk and of the left adrenal gland made an ample periaortic dissection, including the celiac nodes, necessary. The presence of two sutures at risk, the duodenal stump and the origin of the celiac trunk which had been removed en bloc, made it particularly important to find a treatment which would reduce the risk of complications to a minimum. The pancreatic body was sectioned with a mechanical stapler. From a recent review, it seems that this technique presents a lower risk of failure, even though no statistical significance levels have been reached. However, even using this treatment, the fistula rate is higher than 20%[8]. Among the elements to explain this non-satisfactory result we can consider the compression exerted by the stapler, which can lacerate the parenchyma, especially if it is fragile, and the fact that the Wirsung duct is not identified and individually secured. In the case we are describing, the choice of this method, which we do not routinely use, was justified by the reduced thickness of the pancreas at the point chosen for sectioning. Thus, we deviated from the procedure we generally use for the treatment of distal tumors; specifically, the sectioning of the pancreas with a cutter, the application of 5/0 monofilament fine hemostatic stitches and the meticulous search for the Wirsung duct. This latter phase is particularly important to reduce the risk of fistula; it requires careful preparation of the duct and subsequently the application of a double loop suture or an anchoring stitch before sectioning.

If, as in the described case, a selective treatment of the Wirsung is not possible, we believe that it is useful to perfect the treatment of the residual stump using Tachosil®, a horse collagen sponge on which human coagulation factors (fibrinogen and thrombin) are applied. From a first analysis of the components, it transpires that this product combines the hemostatic characteristics of biological glue with the adhesive/reparatory properties of collagen. On the basis of these characteristics, the product was initially used for hemostasis and, as a logical consequence, it is now being used more and more in the field of hepatic resection surgery, in emergency trauma surgery and in every situation in which one wishes to perfect a hemostasis “which is already sufficiently completed”[9,10]. However, in the application we are presenting, we wish to highlight the sealing effect of this product resulting from the rapid adhesion of collagen, helped by means of the rapidly activated coagulation process on the pancreatic stump. This consolidates the obliteration of the excretory duct and reduces to a minimum the effect of small, accessory pancreatic ducts left open. The sealing effect is practically immediate; moderate pressure, which we recommend applying for some minutes, mainly aims at letting the product adhere. After wetting it, the product can be modeled onto the section surface, including its margins and also the ventral and dorsal surface, at a depth of at least one centimeter. Although the product does not require a completely dry surface for the best adhesion to the section surface, it is recommended to have a moderately anfractuous plane. The absorption of the product takes a few weeks and therefore the product cannot favor septic complications in the case of fistula.

The present report simply suggests a possible application of Tachosil®; there is no direct evidence of its ability to prevent the pancreatic fistula, so more cases of distal pancreatectomy should be collected, as it is actually ongoing in a multicenter, randomized, prospective Italian trial.

This sealing effect of Tachosil® was also used to reduce the risk of lymphorrhagia after the extensive lymphadenectomy performed in this case because of the metastatic involvement of lymph nodes in the celiac area, as far as the area adjacent to the aorta. In a case such as this, lengthy draining is commonly used to successfully treat lymphatic losses if the quantity exceeds 1 liter a day, if they persist for a few days and if they show a further increase as soon as free feeding is re-introduced. The application of Tachosil® to refreshed areas at higher risk can contribute to sealing open lymphatic channels and to facilitate the healing process, thus making the early removal of drainage possible and reducing the risk of bacterial contamination. This indication has also not been verified in controlled trials and it represents at this time a simple hypothesis for further studies.