AIM: To investigate the role and clinicopathological significance of aberrant expression of Notch receptors and Delta-like ligand-4 (DLL4) in extrahepatic cholangiocarcinoma and gallbladder carcinoma.

METHODS: One hundred and ten patients had surgically resected extrahepatic cholangiocarcinoma (CC) and gallbladder carcinoma specimens examined by immunohistochemistry of available paraffin blocks. Immunohistochemistry was performed using anti-Notch receptors 1-4 and anti-DLL4 antibodies. We scored the immunopositivity of Notch receptors and DLL4 expression by percentage of positive tumor cells with cytoplasmic expression and intensity of immunostaining. Coexistent nuclear localization was evaluated. Clinicopathological parameters and survival data were compared with the expression of Notch receptors 1-4 and DLL4.

CONCLUSION: Aberrant expression of Notch receptors 1 and 3 play a role during cancer progression, and cytoplasmic nuclear coexistence of DLL4 expression correlates with poor survival in extrahepatic CC and gallbladder carcinoma.

Cholangiocarcinoma (CC) is a highly malignant neoplasm that generally is diagnosed at advanced stage and is associated with a fatal outcome[1]. CC includes cancers originating by malignant transformation of biliary epithelial cells, histologically occurring in the intrahepatic and extrahepatic biliary trees with gallbladder. The extrahepatic CC accounts for 80% to 90% of CC and intrahepatic CC comprises the remainder[1]. The incidence of intrahepatic CC is increasing, in comparison with the stagnant incidence of extrahepatic CC, especially in Western countries[2], although the cause of rising incidence of intrahepatic CC has not been clarified. Intrahepatic and extrahepatic CCs differ in biologic and clinical variables, including not only histopathologic distinction and clinical characteristics, but also carcinogenesis and molecular profiling, even management. In order to define the carcinogenesis of CC, dysregulated genes and pathways involved in proliferation, evasion from apoptosis and senescence, cell cycle dysregulation, invasion, metastasis and angiogenesis, have all been investigated, suggesting a complex network of variable factors and pathways[3,4]. The development of new therapeutic modalities for molecular targeting resulting from defining of the molecular carcinogenesis of CC has been growing recently, mainly as a consequence of preclinical in vitro studies. Till now, complete surgical resection has been regarded as the only curative therapy.

Since the Notch gene was originally discovered in Drosophila, Notch signaling has been investigated in varied organisms from C. elegans to humans. Thus, Notch signaling has been noted to be an evolutionally conserved pathway which regulates physiological processes and is involved in pathological conditions[5]. There are four Notch receptors (Notch 1-4) and five ligands [Jagged 1, Jagged 2, Delta-like ligand-1, -3 and -4 (DLL1, DLL3, DLL4)] in mammals. Ligand-receptor interaction between two neighboring cells activates two sequential proteolytic cleavages of Notch receptor, mediated by the metalloprotease tumor necrosis factor -α-converting enzyme, and by γ-secretase[6]. The liberated Notch intracellular domain translocates into the nucleus, activating target genes, such as Hes, Hey, etc. Physiologically, Notch signaling regulates cellular differentiation, proliferation, apoptosis and stem cell maintenance, and participates in cell-fate specification during development of multicellular organisms[7]. Also, Notch signaling regulates biological events in adult tissue. Recently, the disruption of Notch gene was reported to be implicated in hematological malignancies[8,9]. In addition, aberrant Notch signaling has been reported in a variety of solid cancers, including breast, kidney, pancreas, prostate, cervix, endometrium, brain, lung, liver and skin[10-12]. According to the type of cancer, Notch receptors may have a role as an oncogene or a tumor suppressor gene, though the majority of studies reveal that Notch signaling promotes tumorigenesis[13]. In both physiological and pathological angiogenesis including tumor angiogenesis, the role of Notch signaling has been recognized[8].

DLL4 is an endothelial-specific ligand of the Notch signaling pathway, expressed at areas of vasculogenesis and angiogenesis[14,15]. DLL4 is induced by vascular endothelial growth factor (VEGF) and acts to the downstream of VEGF, as an autoregulatory negative feedback network for inactivation of VEGF, resulting in maturation and stabilization of microvessels[14]. Recently, in addition to endothelium, DLL4 has been shown to be expressed in epithelium, stromal cells of inflammatory cells in normal or reactive tissues, and in tumor cells of solid cancers in humans[16], raising possibilities for a role in tumorigenesis.

In this study, we investigated the role of Notch receptors and DLL4 in progression of human extrahepatic CC and gallbladder carcinoma by analysis of expression with immunohistochemistry (IHC), during carcinogenesis. Furthermore, we investigated the correlations between aberrant expression of Notch receptors and DLL4, and clinicopathological parameters with survival.

One hundred and ten patients with surgically resected extrahepatic CC and gallbladder carcinoma were included in this study, from January 1999 till December 2008 at Dong-A University Hospital, Busan, South Korea. None of the patients recruited in this study received chemotherapy or radiotherapy before surgery. After review of pathological information and medical records, available cases for IHC with paraffin blocks were collected. The pathologic reviews were performed by two pathologists who are experienced in biliary cancer pathology. Outcomes were determined from the date of surgery until death or 31 December 2008, which resulted in a follow-up period of from 1 to 88 mo (mean, 28 mo). Cases lost to follow-up or who died from problems other than extrahepatic CC and gallbladder carcinoma were censored during the survival analysis. The sites of extrahepatic biliary tract consisted of common bile duct and gallbladder. All cases were adenocarcinomas. Clinicopathological parameters such as age, gender, site, tumor differentiation and tumor, node, metastasis (TNM) with staging according to American Joint Committee on Cancer classification were evaluated by reviewing medical and pathological records. The study was approved by the Institutional Review Board of Dong-A University Hospital, Busan, South Korea (10-10-6).

There are few analysis criteria for the immunopositivity of Notch receptors and DLL4 expression. The scoring was based on distribution and intensity according to a previous report[12]. Briefly, the percentage of positive tumor cells with cytoplasmic expression was determined semi-quantitatively and each sample was scored on a scale of 0-4, in which 0: negative, 1: positive staining in 1%-25% of cells, 2: in 26%-50%, 3: 51%-75%, and 4: 76%-100%. The intensity of immunostaining was determined as 0: negative staining, 1: weakly positive staining, 2: moderately positive staining, and 3: strongly positive staining. The immunoreactive score of each section was calculated by the sum of these two parameters. The total sum score was transformed into a three tier system and graded as negative (sum: 0), low (sum: 2-4) and high (sum: 5-7).

The two-tailed χ2 test was performed to determine the significance of the difference between the covariates. Survival durations were calculated using the Kaplan-Meier method. The log-rank test was used to compare cumulative survival in the patient groups. The SPSS software program (version 12.0; SPSS Inc., Chicago, IL) was used in the analyses.

Expression of Notch receptors: Notch receptors 1, 2, 3 and 4 were expressed in non-neoplastic biliary epithelial cells, mesenchymal cells and sometimes inflammatory cells with variable intensities, as well as in micro-vessels 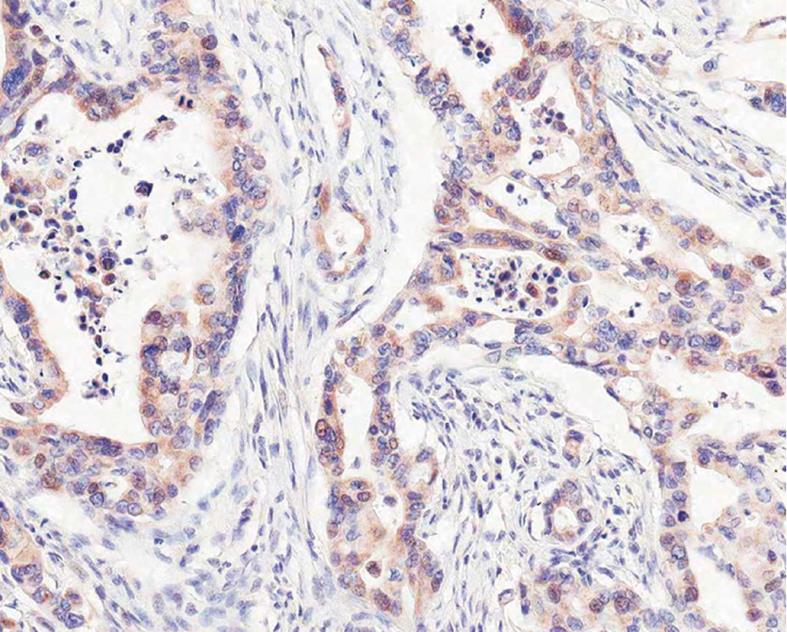 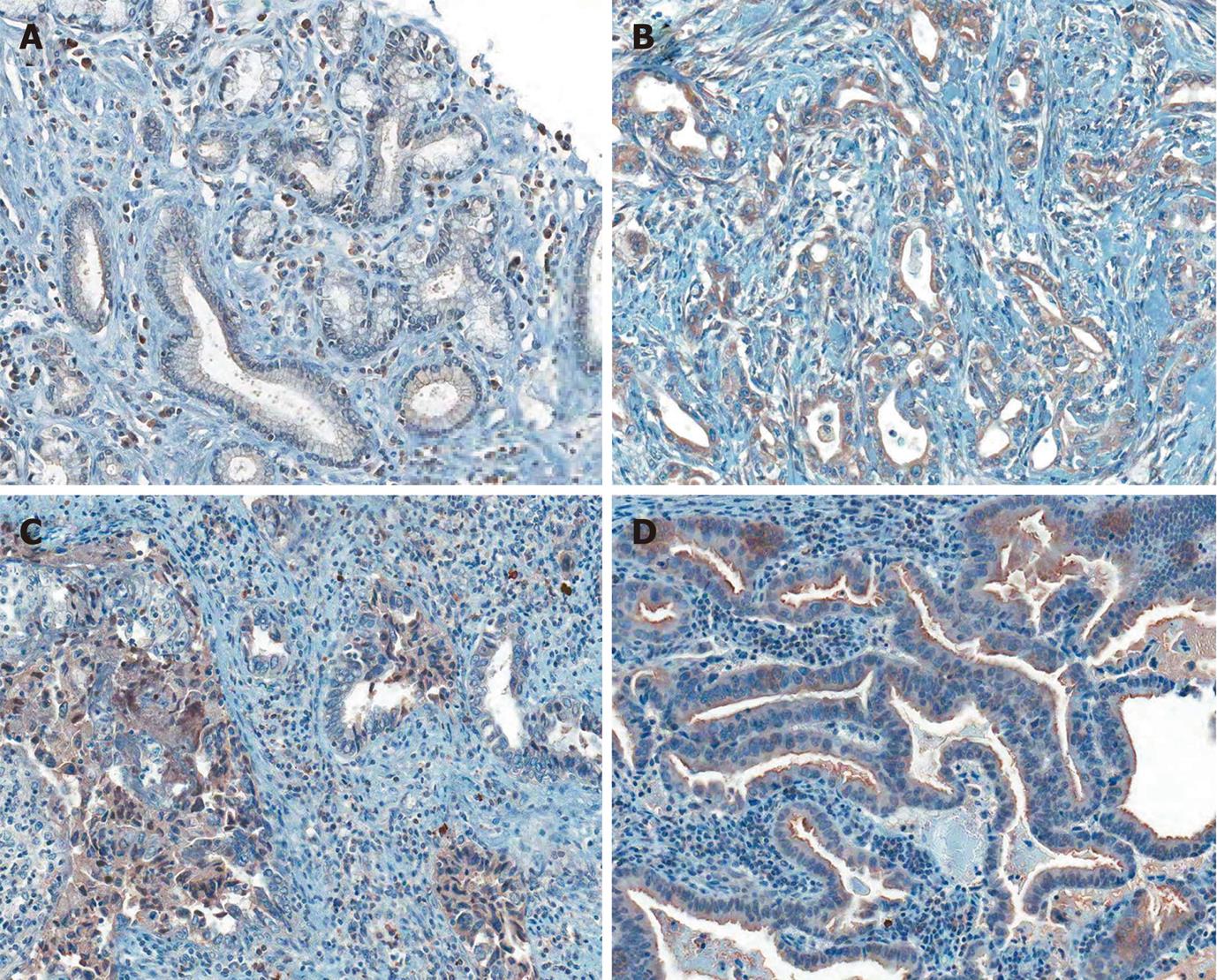 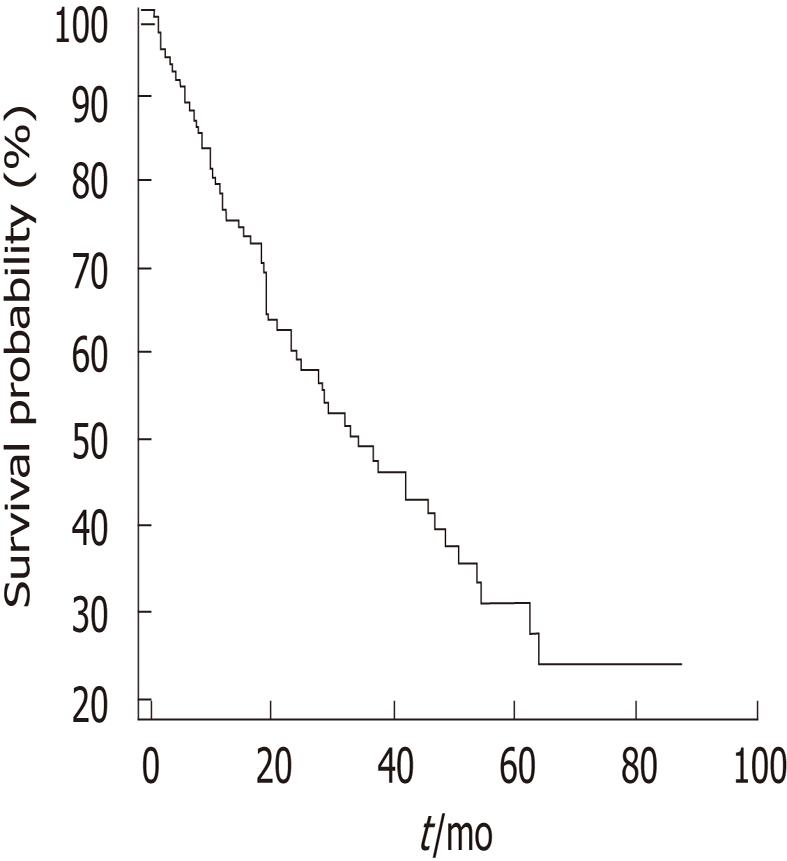 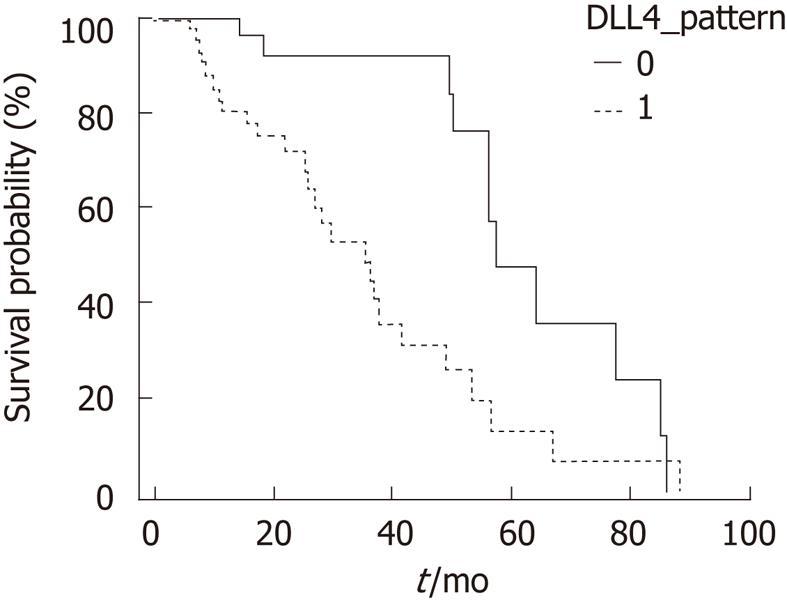 The Notch signaling pathway has been shown to be expressed in a variety of adult tissues in mammals, and furthermore is involved in tumorigenesis with neoangiogenesis of many malignant tumors. In addition, it participates in the development of multicellular organisms by its self renewal potential and induction of differentiation[10]. Few studies in the field of Notch signaling involving biliary epithelial cells have been reported with regard to developmental biology and neoplastic transformation. Notch receptor 2 signaling has been reported to be related to the regulation of biliary epithelial cell differentiation, induction of tubulogenesis during early intrahepatic bile duct development in mice, and mutations of Jagged 1 and Notch receptor 2 resulting in Alagille syndrome, a rare hereditary multi-organ disorder involving impaired intrahepatic bile ducts[5,17]. Ishimura et al[18] reported that Notch receptor 1, but not other Notch receptors, was up-regulated in cholangiocytes when induced by inflammatory mediator nitric oxide synthase, and associated with malignant transformation. However, controversies about the role of Notch receptors in tumorigenesis as an oncogene or a tumor suppressor have arisen; Notch receptors are reported generally as an oncogene in most human cancers[10]. As a well-studied example, Notch receptor 1 functioned as an oncogene in T-cell leukemia through t(7; 9) chromosomal translocation of Notch receptor 1 and T-cell receptor Jß locus[8,9]. Activation of Notch signaling is reported in human non-hematopoietic solid tumors originating from mammary duct, colon, kidney, pancreas, and liver, etc[16]. Others have shown Notch signaling as tumor suppressor in skin cancer and small cell lung cancer, and two faces of Notch as oncogene or tumor suppressor in cervical cancer[10].

In conclusion, these results imply that the up-regulation of Notch receptors 1 and 3 correlates with cancer progression, and that the coexistent cytoplasmonuclear localization of DLL4 expression correlates with poor survival in extrahepatic CC and gallbladder carcinoma. Further investigation on a large scale should be performed in order to understand the contribution of the involvement of Notch signaling in extrahepatic CC and gallbladder carcinoma.

Cholangiocarcinoma (CC) is the second most frequent primary liver cancer and the incidence is increasing. It has a poorer prognosis than hepatocellular carcinoma. Recently, in mammals, it was reported that the Notch signaling pathway is engaged in not only embryonic development, differentiation and specification of cell fate, but also in tumorigenesis with consequent possibilities of anti-cancer therapy targets. Basically, in human extrahepatic CC, including gallbladder cancer, the expression patterns of the Notch receptors and the representative ligand, Delta-like ligand-4, in cancer cells should be clarified.

There are four Notch receptors (Notch 1-4) and five ligands [Jagged 1, Jagged 2, Delta-like ligand-1, -3 and -4 (DLL1, DLL3, DLL4)] in mammals. Recently, they have been reported to be involved in tumorigenesis as oncogenes or as tumor suppressors, and proposed as prognostic factors or anti-cancer targets in aggressive or advanced cancers. In particular, antibodies to Notch receptor 4 and DLL4 have the possibility to be coupled with chemotherapeutic drugs as targeted therapy.

Abnormal Notch signaling has been reported in many human solid tumors, especially in breast cancer. With regard to cholangiocarcinoma, only its high expression has been reported with little study of the clinical impact. As with other solid tumors, the expression of Notch receptors in CC shows a possible role in cancer progression. The study of DLL4 expression in cancer cells has hardly been looked at. The coexistent cytoplasmonuclear localization of DLL4 expression has a novel value as a poor survival indicator.

The up-regulation and nuclear translocation of DLL4 has a probable role in the evaluation of survival as a poor prognosticator. These results of altered Notch signaling in CC can provide fundamentals for further investigation on an expanded scale of human extrahepatic CC and gallbladder carcinoma, mechanism of action through cross-talk of Notch receptors and their ligands, and other signaling networks.

The paper is reasonably important and includes data on a large cohort of patient's with extrahepatic cholangiocarcinoma and gallbladder cancer.