AIM: To study the production and secretion of corticotropin-releasing factor (CRF) by dendritic cells and the influence of commensal bacteria.

METHODS: JAWSII cells (ATCC CRL-11904), a mouse dendritic cell line, were seeded into 24-well culture plates and grown for 3 d. Commensal bacterial strains of Clostridium clostrodiiforme (JCM1291), Bacteroides vulgatus (B. vulgatus) (JCM5856), Escherichia coli (JCM1649), or Fusobacterium varium (F. varium) (ATCC8501) were added to the cells except for the control well, and incubated for 2 h. After incubation, we performed enzyme-linked immunosorbent assay for the cultured medium and reverse transcription polymerase chain reaction for the dendritic cells, and compared these values with controls.

Corticotropin-releasing factor (CRF), a 41-amino acid peptide, is produced mainly in the paraventricular nucleus of the hypothalamus. CRF is a key regulator of the hypothalamic-pituitary adrenal axis. Release of CRF leads to pituitary production of adrenocorticotropic hormone, followed by glucocorticoid secretion by the adrenal cortex[1-5]. Stress induces the release of CRF by the hypothalamus[6]. Stress is known to delay gastric emptying, accelerate colonic transit and evoke colonic motility[7-9], and to decrease the visceral threshold[10] resulting in the development of abdominal symptoms. These events can be triggered by intracerebroventricular or intravenous administration of CRF[8,9,11-13], while stress-induced gastrointestinal dysmotility and visceral hypersensitivity can be improved by central or peripheral administration of a non-selective CRF receptor antagonist[14-16]. Accordingly, stress can induce changes in gastrointestinal motility and visceral perception through CRF. Stressful events are more common in irritable bowel syndrome (IBS) patients[17]. Gastrointestinal dysmotility and visceral hypersensitivity, which are often observed in IBS patients, play an important role in the pathogenesis of IBS[18,19]. Therefore, it appears that CRF is involved in the pathogenesis of IBS.

The risk of developing IBS is increased after an episode of bacterial gastroenteritis. Rodoríguez et al[20] reported that the risk of developing IBS after bacterial gastroenteritis increased by 14.4-fold compared to the general population. Three months after development of bacterial gastroenteritis, patients with IBS symptoms and those without IBS symptoms appeared to be negative for macroscopic colitis, but only patients with IBS symptoms showed increases in the number of chronic inflammatory cells[21]. Moreover, intraepithelial lymphocytosis is observed in some IBS patients without history of bacterial gastroenteritis[22]. Accordingly, inflammation is also involved in the pathogenesis of IBS. The colitis that develops spontaneously in animal models[23-26] requires the presence of intestinal flora, since the disease fails to develop under germ-free conditions. Thus, it appears that commensal bacteria affect the intestinal mucosa and may be required for chronic intestinal inflammation. Dendritic cells (DCs) recognize luminal antigens (such as bacteria or viruses) through toll-like receptors (TLRs), activate natural immunity, and act as antigen-presenting cells resulting in the activation of acquired immunity. Consequently, it is possible that DCs react to common intestinal microbes.

CRF is present not only in the brain but also in several other human tissues, such as the spinal cord, adrenal medulla, lung, liver, pancreas, placenta, and gastrointestinal tract[27-31], and in arthritic joints of patients with rheumatoid arthritis[32]; however, other tissues may also serve as a source of CRF. Lymphocytes appear to be an important source of immunoreactive CRF[33-35], and normal human colonic mucosal enterochoromaffin cells have also been reported to produce CRF[36]. Moreover, CRF receptor expression in DCs was recently reported[37]; however, the possibility that CRF is present in DCs has not yet been investigated.

We hypothesize that (1) DCs produce and secrete CRF; (2) that some commensal bacteria augment these processes; and (3) that secreted CRF influences gut motor function and visceral perception prior to the development of IBS. In the present study, we examined whether CRF is produced or secreted by DCs, and whether production or secretion of CRF from DCs is augmented by commensal bacteria.

JAWSII cells were grown to near confluence before infection with bacteria. Bacteria were added into each well, except the control well, at a cell to bacteria ratio of 1:1000 and incubated for 2 h under 5% CO2 at 37 °C. Following incubation, conditioned medium and floating cells were collected using a pipette and attached cells were removed from the wells using a cell scraper. All cells with medium were pooled and centrifuged at 125 ×g for 7 min according to the manufacturer’s instructions. The pelleted cells were resuspended in 200 μL of Isogen (Nippon Gene, Inc., Japan) and frozen at -80 °C. Conditioned medium was also stored at -80 °C.

Detection of CRF by ELISA

Total RNA was isolated from cells using an RNeasy Mini Kit (QIAGEN, Inc., Chatsworth, CA), and treated with an RNase-free DNase Set (QIAGEN) following the manufacturer’s instructions. RT for synthesizing the first-strand cDNAs was carried out using SuperScriptII RT (Invitrogen) according to the manufacturer’s instructions. The resultant cDNA corresponding to 10-100 ng of total RNA in a 25 μL final volume was examined by real time PCR using the ABI PRISM 7700 sequence detection system (Applied Biosystems, CA, United States) with Taqman Universal PCR Master Mix together with TaqMan gene expression assay products (Assay ID Mm01293920-s1; Applied Biosystems). Glyceraldehyde-3-phosphate dehydrogenase (GAPDH) gene expression was examined as an internal reference and CRF gene expression was examined by means of the comparative CT method. CT values reflect the PCR cycle number for which the amount of amplified target reaches a fixed threshold. The CT for the target gene and reference gene was calculated for each sample. ΔCT is the difference in CT between the target and reference genes. ΔΔCT is the difference between the ΔCT of the sample and the ΔCT of the calibrator (the control sample). CRF mRNA expression normalized to an internal reference and expressed relative to the control sample treated without bacteria is given by 2-ΔΔCT. Data represent the averages of 4 independent experiments.

All the data were expressed as mean values ± SEM. Statistical analysis was carried out with analysis of variance and Fisher's protected least significant difference. Differences were considered statistically significant at P < 0.05. 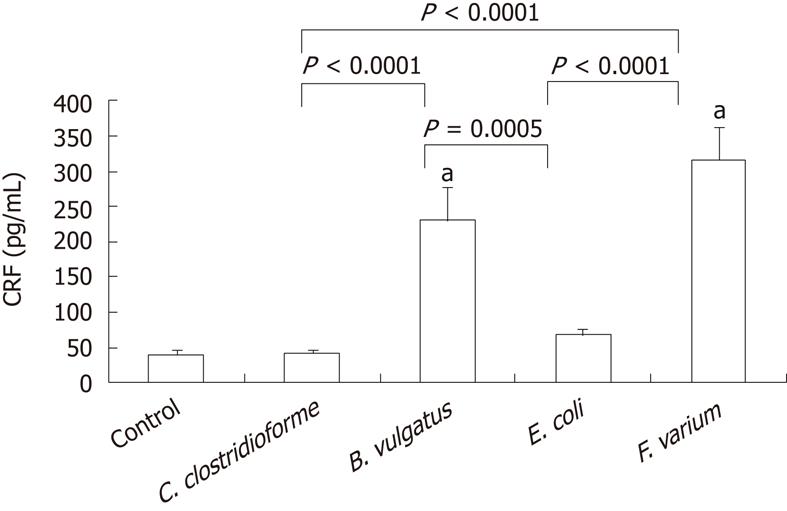 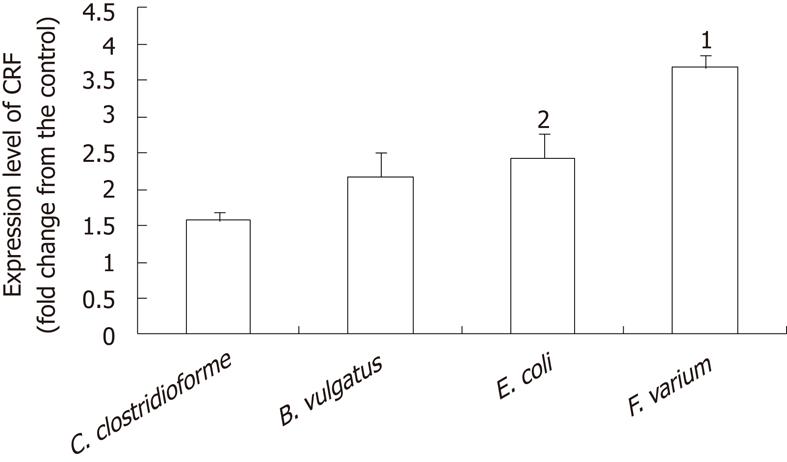 The results from this study demonstrate that DCs can secrete CRF protein. Moreover, secretion of the CRF protein and expression of CRF mRNA were stimulated after challenge with commensal bacteria.

The term “commensal” generally refers to living in a relationship in which one organism derives food or other benefits from another organism without hurting or helping it; therefore, intestinal microorganisms have been referred to as commensal bacteria. Studies with animal models of mucosal inflammation, such as the interleukin-10 knockout mouse model[24,26] and the T cell receptor alpha-chain-deficient mouse model[25], suggested that the presence of intestinal flora was required in order for colitis to develop spontaneously, since the disease failed to develop under germ-free conditions. Bacterial overgrowth in the small intestine is associated with the severity of symptoms of IBS associated with increased intestinal gas and immune responses, and antibiotic therapy has been shown to attenuate IBS symptoms in human patients[41]. Thus, intestinal flora that have been described as commensal flora may actually have several harmful effects on the intestinal mucosa.

DCs recognize luminal antigens, and consequently trigger mucosal inflammation. In such instances, DCs may react to common intestinal microbes and may increase the output of CRF. In the present study, the commensal bacteria F. varium and B. vulgatus resulted in a significant increase in CRF protein levels as compared with control samples that were not exposed to bacteria. All 4 bacterial strains caused an increase in the expression of CRF mRNA as compared with control samples. Thus, all of the bacterial strains examined in this study appear to have the ability to increase the output of CRF from DCs. F. varium appeared to have the strongest effect, since CRF mRNA levels in the presence of F. varium were significantly higher than in the presence of the other bacteria. C. clostridioforme had the lowest ability to increase both CRF protein and CRF mRNA from DCs. C. clostridioforme are the only gram-positive bacteria of the 4 strains examined in this study. Gram-negative bacteria activate immune cells through TLR4 of DCs, while gram-positive bacteria initiate their effect through TLR2[42]. Differences in such pathways may lead to different results. In further work, another intestinal microbe such as probiotic bacteria should be examined. As probiotic bacteria should have a potentially beneficial effect for the host[43], it would be of great interest to similarly examine the response of DCs with regard to CRF levels.

JAWSII cells, a type of DC, are derived from the bone marrow. In the murine Peyer’s patch, myeloid DCs are present in the subepithelial dome region. While little is known about the phenotype of colonic DCs, it was recently reported that myeloid DCs made up the largest population[44]. Thus, JAWSII cells are thought to have the character of colonic DCs. Additional studies with human colonic DCs would be valuable, as would further studies to delineate the processes by which commensal bacteria increase the amount of CRF from DCs.

Corticotropin-releasing factor (CRF) influencing gut motor function and visceral perception appears to be involved in the pathogenesis of irritable bowel syndrome (IBS). Intestinal inflammation is associated with post-infectious IBS, and also observed in some IBS patients without history of bacterial gastroenteritis. Intestinal inflammation may be triggered by dendritic cell-mediated immune responses to commensal bacteria, which may involve CRF generation by dendritic cells (DCs).

Spontaneously developing colitis requires intestinal flora, since colitis fails to develop under germ-free conditions. DCs recognize luminal exogenous antigens and activate natural and acquired immunity. It is possible that DCs react to common intestinal microbes. CRF is present in several human tissues, and CRF receptor expression in DCs was recently reported. There has been no report on the production and secretion of CRF from DCs.

This is the first report that DCs produce and secrete CRF and that commensal bacteria augment production or secretion of CRF from DCs.

DCs produce and secrete CRF and some commensal bacteria augment these processes. Secreted CRF may influence gut motor function and visceral perception prior to the development of IBS. Accordingly, the results of this study may shed light on the pathogenesis of irritable bowel syndrome.

CRF is produced mainly in the paraventricular nucleus of the hypothalamus, but recently has been reported to be present not only in the brain but also in several other human tissues. CRF is a key regulator of the hypothalamic-pituitary adrenal axis, and it appears that CRF is involved in the pathogenesis of IBS.

The manuscript reports the effect on CRF secretion in short term cultures (3 d) by a murine dendritic cell line following incubation with three different commensal bacterial strains. The methodology appears generally well conceived and the manuscript is well written. The conclusions that dendritic cells produce and secrete CRF and that commensal bacteria augment production or secretion of CRF from dendritic cells are straightforward and justified by the results obtained, although the biological significance of the observations remains obscure.