AIM: To improve the diagnosis of heterotopic pancreas by the use of contrast-enhanced computed tomography (CT) imaging and CT virtual endoscopy (CTVE).

METHODS: A total of six patients with heterotopic pancreas, as confirmed by clinical pathology and immunohistochemistry in the Sixth Affiliated People’s Hospital of Shanghai Jiao Tong University, Shanghai, China, were included. Non-enhanced CT and enhanced CT scanning were performed, and the resulting images were reviewed and analyzed using three-dimensional post-processing software, including CTVE.

Heterotopic pancreas is a condition in which pancreatic tissue is found outside the boundaries of the normal pancreas; such tissue is regarded as aberrant pancreas or an accessory pancreatic lesion. This tissue has no anatomical, vascular or neuronal connection with the main pancreas. Such anomalies can become apparent at any age, but they are most commonly found in the fourth, fifth and sixth decades of life, with a slight male predominance. Heterotopic pancreas frequently occurs in association with the gastrointestinal tract (stomach, duodenum, jejunum, ileum) but is also found associated with Meckel’s diverticulum, mesentery, omentum, spleen, and gallbladder[1]. In mice, the formation of a heterotopic pancreas may be caused by inactivation of the gene IPF-1 (also known as IDX-1, STF-1 or PDX), which leads to errors in embryological development that can result in the total absence of the pancreas[1]. Symptoms are dependent on the location of the ectopic tissue, although the most common symptoms are epigastric pain, pyloric obstruction, cholecystitis, and intussusception[1,2]. Some cases are identified as a result of such symptoms, but others are identified incidentally, such as during an unrelated surgery or during autopsy[1,3,4].

Multi-slice CT scanning was performed in all of the six cases using the LightSpeed VCT (GE) or Sensation CT (SIEMENS). No abnormality was detected in one of the female patients who therefore did not undergo contrast-enhanced CT scanning. The other five cases underwent enhanced CT scanning after standard CT scanning. With the exception of the 3-mo-old infant, the patients were asked to hold their breath during the scan in order to reduce artifacts. The thickness of the scanning slices was either 5 mm or 7 mm. The CT data of some patients was further refined using reconstruction software, which enabled thinner slice data to be obtained. The reconstruction software was all supplied by multi-slice CT; this was one function of the multi-slice CT. After the reconstruction the thinnest slice was 0.625 mm.

Each patient received the contrast agent iopromide (dose, 50-70 mL) through the median cubital vein. The arterial phase scan was produced approximately 30 s after the start of the injection. Coronal and sagittal images were obtained, and scanning data were analyzed on the GE workstation ADW 4.3. Lesion sizes were measured, and CT values were calculated (Table 1). Images were analyzed by application of three-dimensional post-processing software, including CT virtual endoscopy (CTVE).

The six patients comprised four males (aged 38, 60, 60 and 69 years) and two females (aged 3 mo and 59 years). All five adult patients had experienced symptoms over a period of time ranging from weeks to years. Three of the patients presented with symptoms that were directly indicative of gastrointestinal disease, which made the lesions simpler to identify. However, two of the patients had non-specific symptoms, including carcinoid syndrome or cachexia associated with other systemic diseases. As these symptoms did not directly indicate a heterotopic pancreas, the lesions were more difficult to identify. They were discovered after physical examination and other tests. The 3-mo-old girl was jaundiced, and although CT scanning revealed the presence of a choledochal cyst, the heterotopic pancreatic tissue that indeed was later found to be present in the mesentery was not detected (Table 1).

The CT values of the heterotopic pancreatic tissues were calculated, and these ranged from -47.8 to 43.3 Hu (Table 2). The density measured in four cases was indicative of soft tissue, and this density correlated with the fatty tissue in only one case. The lesions were frequently superficially lobulated, with circumscribed borders, and they protruded into the gastrointestinal cavity or peritoneal cavity. After carrying out contrast-enhanced CT, the CT value of each lesion was based on the arterial phase scanning data. The three soft tissue lesions were homogeneously enhanced to varying extents. The other two lesions were heterogeneously enhanced (Table 2).

The scanning data were analyzed in depth using the GE workstation. The lesions could be seen from any angle in addition to the traditional axial, coronal, and sagittal views. Post-processing software was used to reveal further detail. In two cases, there was a strip of low density, which could be seen in both the axial and sagittal images; this may have represented the duct of the heterotopic pancreas (Figures 1 and 2). 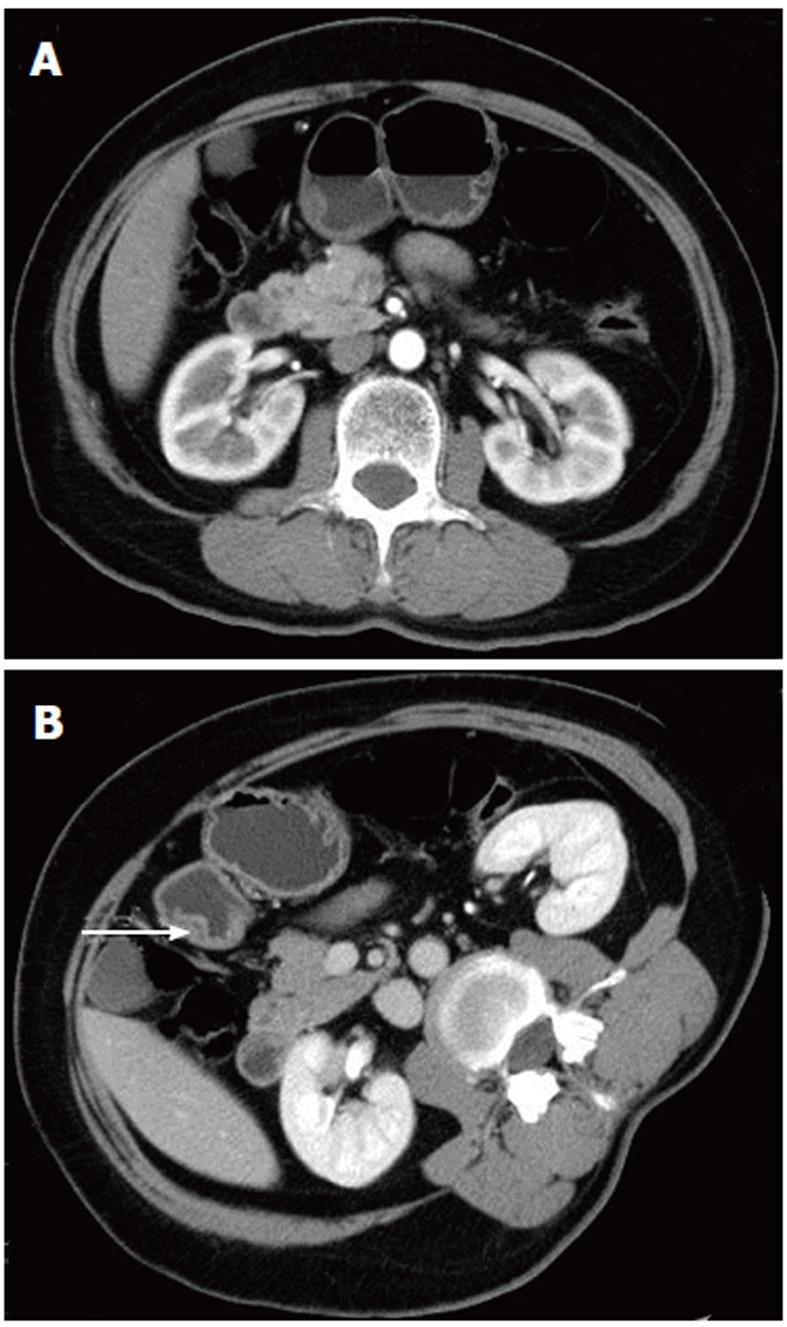 Figure 1 Heterotopic pancreas in the gastric antrum of a 59-year-old woman. A: Arterial phase image showing gastric antrum wall thickening. There is a circumscribed border of the lesion below the mucosal layer. The density at the center of the lesion is slightly lower than at the periphery. B: Each patient was asked to lie on their right side during venous phase scanning. The central area of the low-density region (white arrow) is obvious. 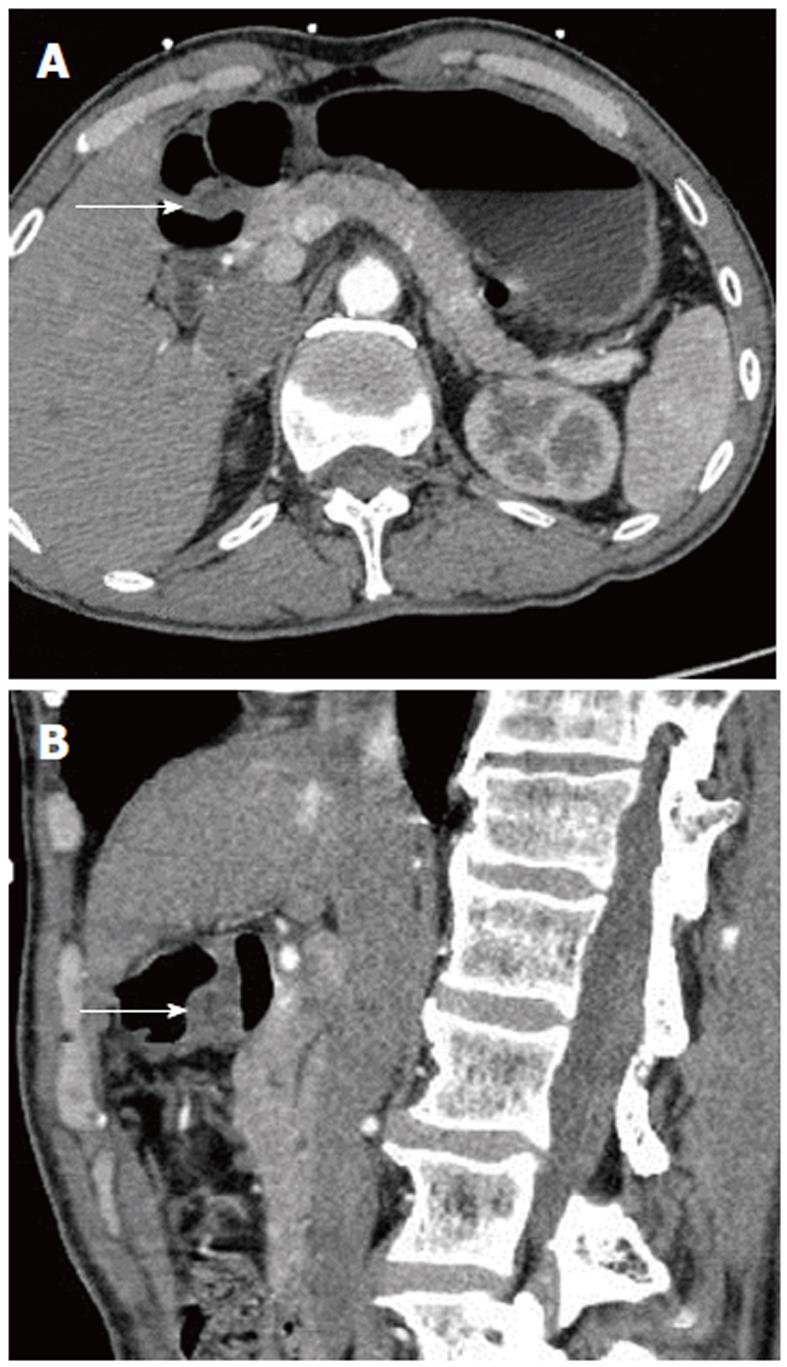 CTVE imaging of each entire lesion revealed structural features of the mass, such as a spherical shape and superficial lobulation, amongst others. This also aided in identifying the layer of the gastrointestinal wall in which the lesion was located, and it showed that the mucosa around the lesion was normal (Figure 3). 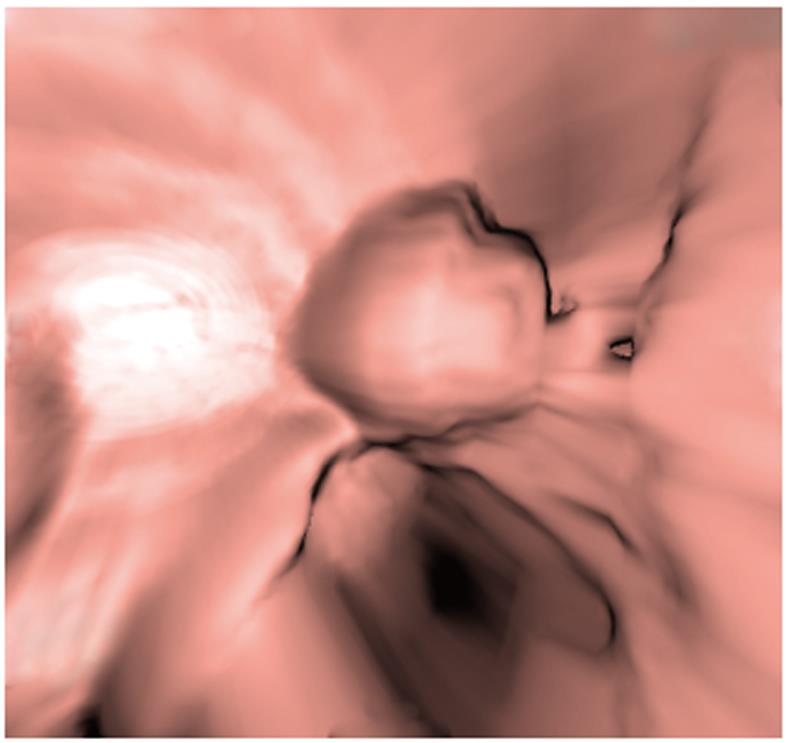 Figure 3 Heterotopic pancreas at the lesser curvature aspect of a 60-year-old man, the lesion is located below the mucosal layer. Computed tomography virtual endoscopy image showing that the lesion is round and superficially lobulated with a depression on one side.
DISCUSSION

The incidence of heterotopic pancreas is low, with only 40% of patients experiencing symptoms and 60% of cases being found incidentally during surgery for other disorders[6-9]. Although CT scanning is a highly sensitive technique, it can still be difficult to detect this abnormality. In this study, a heterotopic pancreas was detected in five of six patients by means of CT scanning. Moreover, contrast-enhanced CT scanning should always be performed, when possible. Heterotopic pancreatic tissue was not observed in only one patient - the infant. For that patient, we postoperatively analyzed the CT images, but the lesion was still undetectable. As the intestines had expanded due to gas and liquid accumulation, as is commonly seen in infants, some of the intestines congregated at the mesenteric root.

Histologically, heterotopic pancreas is composed of ductal components, acinar cells, and islet cells. Because of differences in the proportions of the three components, however, the density of heterotopic pancreas tissue can vary[15]. In our study, lesions in four cases were composed of solid soft tissue, which was the commonest type. With the borders being defined to a variable extent, the density was similar to that of the main pancreas in 75% (3/4) of the cases of this type. Both the non-enhanced and contrast-enhanced CT images were analyzed, and the CT value of each lesion was measured (Table 2). These tissues were also homogeneously enhanced and were similar to the pancreas[16]. Only one case had a heterogeneous enhancement density that was typical of fatty tissue, and this was initially misdiagnosed as a lipoma. Therefore, lesions of the gastrointestinal tract having a density equivalent to fat should be additionally screened for a potential diagnosis of heterotopic pancreas.

Further thin-slice image data were obtained using the multi-slice CT, showing more details of each lesion, such as the interior density, enhancement pattern, location, and the duct. The thin-slice images also yielded high-quality two-dimensional and three-dimensional representations. With selection of the optimal viewing angle for the two-dimensional image, the low-density strip was shown to a greater extent; the presence of this strip is thus one of the characteristics of a heterotopic pancreas. Using EUS, Ryu et al[18] also identified the anechoic duct structure in some cases of heterotopic pancreas. Other work has shown that EUS may be more useful than CT in visualizing the pancreatic ducts[19]. In our study, however, the very small, narrow ducts were detectable only upon analysis of thin-slice two-dimensional contrast-enhanced images, and they were not detectable by EUS in the same patients. Therefore, we found that CT images were more sensitive for detecting the heterotopic pancreas duct.

CTVE is a three-dimensional display technology used in the post-processing of CT scanning data to reconstruct three-dimensional cavity surface images of hollow organs, and it provides images that are similar in detail to those obtained by endoscopy (Figure 3). The mucosa around all lesions we observed was normal. The gastrointestinal mucosa seemed to be undamaged and enhanced[14]. This was an important sign in the diagnosis of heterotopic pancreas.

In conclusion, CT scanning, contrast-enhanced CT scanning and CTVE provide useful information about heterotopic pancreas tissue and reveal some of its characteristic features. This combined-technique approach represents a novel way of recognizing and diagnosing the disease. Although these techniques have some limitations, they have been shown to be beneficial for preoperative diagnosis of heterotopic pancreas and therefore may influence the choice of surgical procedure. Resection of heterotopic pancreas tissue is advisable in order to avoid later complications and a second operation[22,23,24].

Heterotopic pancreas has a low incidence, and most affected individuals are asymptomatic. Previous reports describe the identification of heterotopic pancreas through endoscopic ultrasonography, but few studies have focused on the potential benefits of computed tomography (CT) and contrast-enhanced images. With the improvement in multi-slice CT technology and the widely used post-processing software, this approach provides a new way to detect the features of heterotopic pancreas.

In recent years, an increasing number of studies have focused on the application of contrast-enhanced CT scanning, post-processing software, and Computed tomography virtual endoscopy (CTVE) technology for the diagnosis of heterotopic pancreas.

CT scanning revealed the location and enhanced features of the lesion. CTVE showed the location, size, and shape of lesions as well as the organs with which they were associated; it also could visualize lumen stenosis and the surrounding mucosa. CTVE is also a reliable way to show the duct of heterotopic pancreas tissue. The advantages of this approach are that it is non-invasive and can reveal the extent of disease.

The findings of this study will be advantageous for the preoperative diagnosis of heterotopic pancreas. The approach also demonstrates a new use of CTVE.

It is an interesting proposition, even though founded on retrospective analysis.