Endoscopic treatment, such as endoscopic mucosal resection (EMR) and endoscopic submucosal dissection (ESD), has been established as one of the treatment options for selected cases with early gastric cancer (EGC). Most studies on this topic have been carried out by researchers in Japan. Recently, the experience in EMR/ESD for EGC outside Japan is increasingly reported. In Korea, gastric cancer is the most common malignant disease, and the second leading cause of cancer death. Currently, EMR for EGC is widely performed in many centers in Korea. Early results with a short-term follow-up period are very promising in Korea. The complete resection rate of EMR was 37.8%-94.3%, and that of ESD was 77.4%-93.1%. In this review, we will provide an overview of the outcomes of endoscopic treatments in Korea.

Gastric cancer is the most common malignancy and the second leading cause of cancer death in Korea. The detection rate of early gastric cancer (EGC), however, has been steadily increasing in Korea. One of the main reasons for this trend is the widespread use of endoscopy as a screening tool for gastric cancer-especially in individuals without symptoms[1,2].

Endoscopic mucosal resection (EMR) and/or endoscopic submucosal dissection (ESD) is currently accepted as a standard treatment for selected cases with EGC[3,4]. Early data suggest that EMR/ESD provides a survival rate of more than 90% comparable to that of surgery if the technique is applied for the appropriate indication[5,6]. Most studies on this topic were performed in Japan, where the incidence of EGC is very high (for review, see these articles[4,7]). The philosophy and technique of endoscopy is quite different between Eastern and Western endoscopists[8]. Even among Eastern countries, the idea of the use of endoscopy for gastric cancer is quite different between Korean doctors and Japanese doctors. Therefore, extrapolation of Japanese data to other groups of patients may lead to suboptimal results.

The experience of EMR/ESD for EGC outside Japan has been increasingly reported[9-16]. The gold standard study design for evaluation of the efficacy of endoscopic treatment of EGC is a long-term, large-scale, randomized controlled trial. However, the excellent prognosis after surgical treatment of EGC, especially in cases indicated for endoscopic resection, makes randomized controlled trials unethical. Therefore, the best feasible evidence of the efficacy of EMR/ESD comes from long-term clinical follow-up data. In this review, we will provide an overview of the updated outcomes of EMR/ESD for EGC in Korea (Table 1).

Endoscopic treatment of EGC before the introduction of ESD

In Korea, EMR for EGC was first reported in 1996[9], followed by a number of clinical studies. A typical example with relatively long-term follow-up data was a study performed by Youn et al[17] from Yonsei University Medical Center in 2006. Between April 1996 and March 2005, 147 patients were treated by EMR. The overall rate of complete resection was 84.6% (126/149), while a complete resection rate of 93.5% was achieved in mucosal cancers (115/123). The success of complete resection was significantly affected by endoscopic gross type (depressed lesion), the degree of differentiation, and the depth of invasion, independently. There were only 5 cases (4.0%) of local recurrence during the follow-up period. There was no disease-related or treatment-related mortality.

Following endoscopic resection of EGC, the development of additional gastric cancer is a significant problem. Investigators from Yonsei University studied the factors related to the multiple synchronous and/or metachronous gastric cancers in EMR/ESD patients[18]. After endoscopic treatment of EGC(s), they followed 235 patients for 24 mo or longer. Twenty-three patients (9.8%) were found to have additional gastric cancer within 1 year. Twenty metachronous cancers (8.5%), which were defined as cancers detected after 1 year of treatment, were also found. Interestingly, initial histology of the resected specimen was related to the development of additional cancer; undifferentiated histology of the primary lesion was related to synchronous and metachronous gastric cancer (P < 0.001 and P = 0.002, respectively)[18]. This is very interesting data which should be considered in the discussion of expanding the indications of EMR/ESD.

Techniques and results of ESD for EGC

In Korea, the most commonly used endoscopic treatment modality for EGC has been changed from endoscopic mucosal resection with precutting (EMR-P) to ESD (Figure 1)[19]. The techniques of ESD used in Korea and Japan are quite similar. In brief, ESD is usually performed under conscious sedation or slightly deeper sedation using either midazolam or propofol. Cardiorespiratory function is continuously monitored during the procedure. After identifying the target lesion, marking dots were made circumferentially at about 5 mm lateral to the margin of the lesion using a needle knife or an argon plasma coagulation probe. After marking, a submucosal injection of various solutions, such as normal saline and epinephrine mixture or glycerol mixture, is performed around the lesion to make a submucosal cushion. An initial short incision of the mucosa was made with the needle knife to allow the submucosal insertion of the tip of the insulation-tipped (IT)-knife or other knives. Circumferential mucosal cutting is performed outside the marking dots to separate the lesion from the surrounding non-neoplastic mucosa. After the circumferential cutting, an additional submucosal injection is carried out. Finally, direct dissection of the submucosal layer is performed using one of the various knives. When needed, an electrocautery snare may be used at the final step. During the ESD procedure, endoscopic hemostasis is performed with a needle knife or specialized hemostatic forceps. 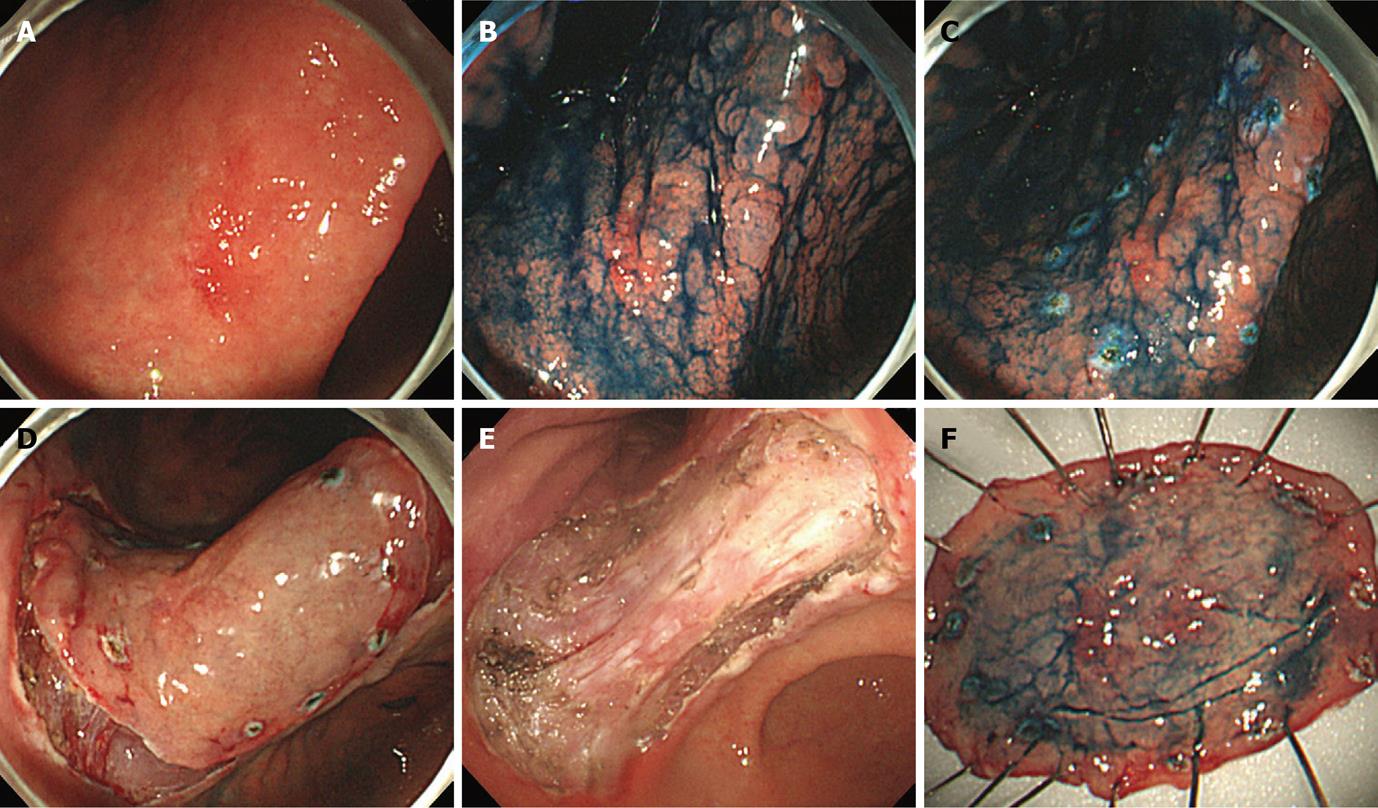 Figure 1 Endoscopic submucosal dissection procedure for early gastric cancer. A: 1.5 cm × 1.2 cm sized hyperemic slightly elevated early gastric cancer was seen at the lesser curvature side of the lower body just above the gastric angle. Previous forceps biopsy results showed moderately differentiated adenocarcinoma; B: Indigo carmine dye was sprayed onto the lesion to define the lateral margin more clearly. Gastric mucosa around the cancer lesion showed severe metaplastic change; C: Using the tip of the needle knife, marking dots were made circumferentially at about 5 cm to 10 mm lateral to the estimated margin of the lesion; D: After submucosal injection of saline mixed with epinephrine and indigo carmine, a circumferential mucosal cutting was performed outside the marking dots to separate the lesion from the surrounding non-cancerous mucosa; E: After additional submucosal injection, direct dissection of the submucosal tissue was performed using an IT-knife and endoscopic hemostasis was carried out. A large artificial ulcer was made; F: The resected specimen with a central cancerous lesion. In the pathologic examination, a 1.8 cm × 1.1 cm sized moderately differentiated tubular adenocarcinoma limited in the mucosal layer was identified. The resection margin was free of cancer, and there was no lymphovascular invasion.

Min et al[22] from Samsung Medical Center reported their experience of EMR-P and ESD with short-term follow-up data. From 2003 to 2006, 346 consecutive patients with EGC were treated by either EMR-P (103 patients) or ESD (243 patients) and their clinical outcomes were compared. In the ESD group, the rate of en bloc plus R0 resection was significantly higher than the EMR-P group (88.9% vs 75.7%, P = 0.002). For small EGC (diameter < 20 mm), however, the en bloc plus R0 resection rate for EMR-P was comparable to ESD. The complication rate was slightly higher in the ESD group, but there was no statistical significance. In the case of R0 resection of intramucosal differentiated cancer, neither group showed local recurrence during the median 29 and 17 mo of follow-up[22].

Jang et al[23] from Dong-A Medical Center reported their follow-up data after ESD. A total of 198 patients with EGC were treated with ESD from 2004 to 2007. In EGC patients, en bloc resection was achieved in 89.7% (177/198), and the complete resection rate was 87.9% (174/198). During the median follow-up period of 30 mo, local recurrence was found in 10 patients (5.1%). Tumor size > 20 mm was significantly associated with local recurrence. The 3-year cancer-free survival rate was 94.9%. Among 10 patients with local recurrence, 6 were successfully treated with a second ESD, and 4 were treated surgically after a failed attempt at ESD. Six metachronous cancers were also found, which were treated with ESD. As a whole, the 3-year cancer-free survival rate was 94.9%[23].

Kim et al[24] from Soonchunhyang University reported their experience using a novel device, the Fork knife (Endo FS). Although the authors did not report the long-term follow-up data after ESD, the en-bloc resection rate was 95.8% (254/265) using the Fork knife, and was comparable with that of 93.1% (67/72) using a more popular Flex knife. Complete ESD without tumor cell invasion of the resected margin was obtained in 81.1% (215/265). The mean procedure time was shorter in the Fork knife group compared to the Flex knife group (59.6 min vs 76.7 min, P < 0.05). The authors concluded that the Fork knife is useful for clinical practice and has the advantage of reducing the procedure time[24].

Two multicenter retrospective studies on the clinical efficacy of endoscopic treatment of EGC have recently been published. The first study was published in 2007 by Kim and other members of the Korean EMR Study Group (changed to the Korean ESD Study Group in 2009)[25]. Data were collected retrospectively using the on-line database registry system. From 2000 to 2002, 514 EGCs in 506 patients were treated by various techniques in 13 institutions. EMR-P was the most commonly used technique (52.3%). ESD was used in only 6.6%. The resection was regarded as incomplete if histopathologic examination revealed a positive resection margin, submucosal invasion, positive lymphovascular invasion, or undifferentiated histologic diagnosis. The rate of complete resection was 77.6%. For completely resected mucosal cancers (n = 399), the median duration of follow-up was 23.5 mo (range 5-70 mo). In this group, local recurrence was detected in 24 cases (6.0%) with a median interval between EMR and recurrence of 17.9 mo (range 3.5-51.7 mo). There were 3 cases with perforation and 71 cases with bleeding. No deaths were related to recurrence of gastric cancer during the overall median follow-up period of 39 mo[25].

After the first multicenter study, ESD was widely used in different hospitals in Korea. The Korean ESD study group has carried out a second multicenter retrospective study on the safety and effectiveness of ESD[26]. From January 2006 to June 2007, 1000 EGCs in 952 patients (502 men, 450 women; mean age 62.1 years, range 43-90 years) were treated using ESD at 6 Korean ESD study group-related university hospitals in Korea. The rates of en bloc resection and complete en bloc resection were 95.3% and 87.7%, respectively. The rates of significant bleeding and perforation were 0.6% and 1.2%, respectively. The mean procedure time was 47.8 ± 38.3 min. However, multicenter long-term follow-up data after ESD have not yet been reported[26].

Endoscopic treatment of EGC was developed in Japan. However, experience in endoscopic treatment has now been reported in many other countries. As shown in this review, ESD for EGC has become quite a common procedure in Korea. In 2009, a multicenter study of ESD was reported in Taiwan[27]. In China, early experience of ESD has been reported[28]. Even in Western countries where early EGC scheduled for endoscopic treatment is uncommon, small studies evaluating the usefulness of ESD have been published[11,29,30]. Because of the advantages of ESD in terms of complete resection rate and curative resection rate, we expect that more cases of EGC will be treated by ESD not only in Korea but also in many other countries.

Early results of endoscopic treatment of EGC in Korea have been very promising. However, the duration of follow-up is rather short, which makes conclusive comments difficult. Before expanding indications for endoscopic treatment, we need to examine the reported and unreported data very carefully. In this regard, a nationwide registry of endoscopically treated EGC cases seems to be mandatory.