Endoscopic submucosal dissection (ESD) is currently widely accepted as a standard treatment option for early gastrointestinal neoplasms in Korea. However, ESD has technical difficulties and a longer procedure time than conventional endoscopic resection. So it may have a higher risk of complications than conventional endoscopic resection techniques. We, the ESD study group of Korean Society of Gastrointestinal Endoscopy, have experienced many complications, mostly treated by endoscopic or conservative management. Here, we introduce and share our experiences for management of post ESD complications and review published papers on the topic.

Endoscopic submucosal dissection (ESD) enables complete and en bloc resection of large or ulcer related superficial gastric cancer. However, the complication risk can be increased due to the long procedure time of submucosal dissection[1]. The major complications include bleeding and perforation[2]. The bleeding which occurs during ESD is almost controlled. Minor bleeding does not cause any problems to patients. So it is not considered to be a complication of ESD[1]. Risk of perforation, which is another major complication, is not reduced because of extended ESD indications. However, ESD complications can be mostly treated by endoscopic or conservative management and do not affect the prognosis of patient.

Acute bleeding is controlled easily by endoscopic coagulation but in cases of delayed bleeding, transfusion, emergency endoscopic evaluation and even surgical procedure could be required[3]. It is manifested with hematemesis or melena. It occurs within 24 h in most cases, but it can also happen 2 wk after the procedure[1]. A considerable duration, at least 8 wk, is needed for healing of EMR related ulcers and bleeding can be detected for quite a long time[4].

Endoscopic hemostasis: It is important that accurate incision or submucosal dissection between the submucosa and muscularis propria layer is performed to prevent procedure related bleeding. There are large vessels in the middle of submucosa layer and the bleeding risk can be increased with blind dissection. Targeted dissection and precoagulation are needed to prevent bleeding due to the presence of large vessels in the dissected layer[5]. There are several kinds of endoscopic hemostasis with hemoclip, electronic coagulation and argon plasma coagulation[2]. Also it is common for proton pump inhibitors (PPI) or histamine receptor (H2) blockers to be prescribed for 4 to 8 wk after ESD to prevent bleeding and encourage healing of post ESD ulcer[6].

Hemoclips can control bleeding without any tissue damage. It is not usually recommended to use these in ESD for several reasons. It can disturb the procedure to use knives, or may obstruct the operator’s field of vision and cause problems when trying to perform another endoscopic hemostasis[2]. It can be used in cases of uncontrolled massive bleeding that are not controlled with other methods. The major indication for hemoclipping is for preventing bleeding of visible vessels on post ESD ulcer (Figure 1A)[5]. It can also prevent delayed bleeding with mucosal protection from gastric acid, pepsin and mechanical damage of vessels[7]. 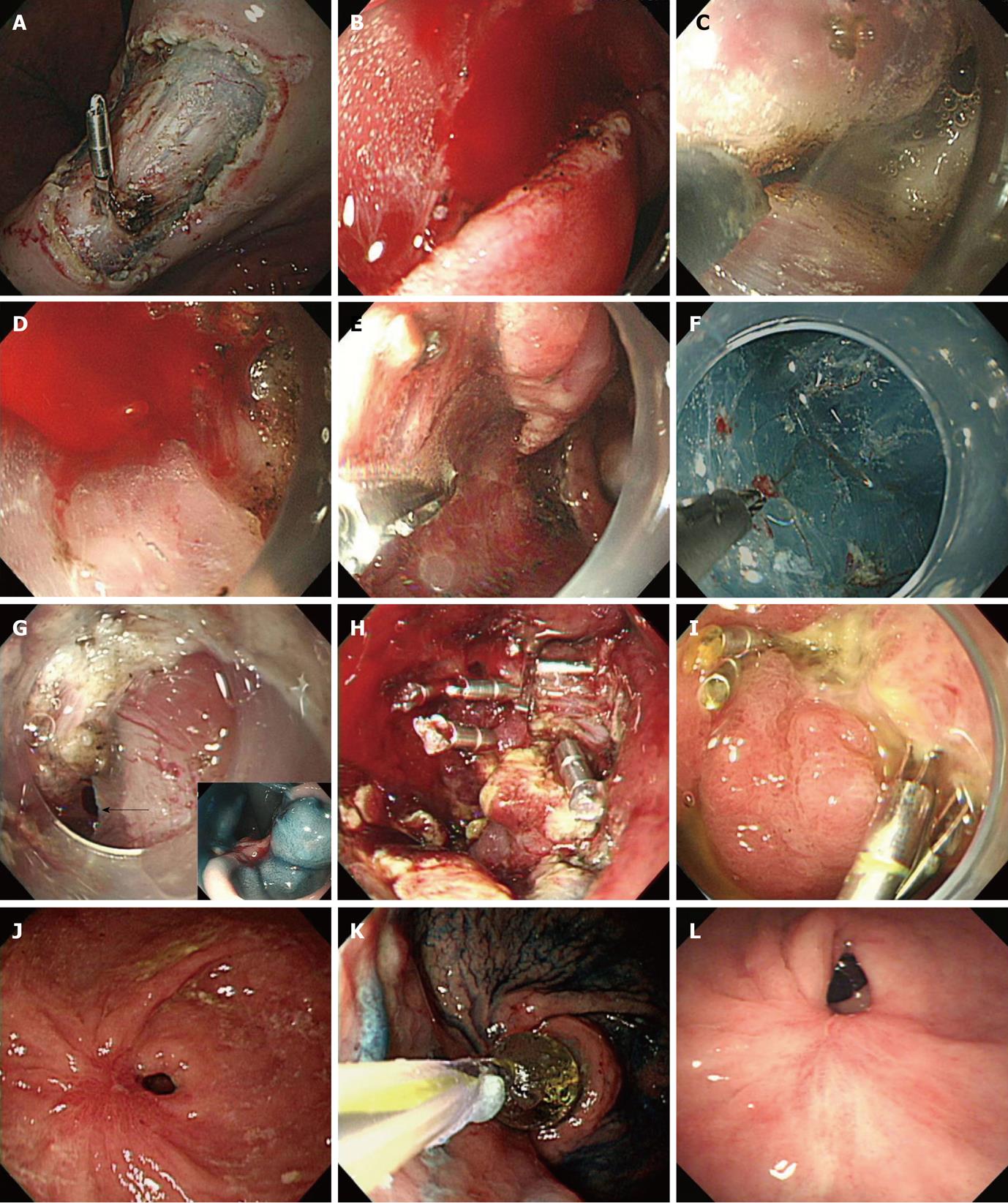 Electrocoagulation is useful for hemostasis of visible vessels or active bleeding during or after the procedure. The electrosurgical unit can be readily used as the knife itself during the procedure. In oozing of blood, electrocoagulation controls the bleeding immediately (Figure 1B and C). However, it is not indicated for pulsating bleeding and condensed vessels. The hemostatic forcep is used for pulsatile or nonlocalized bleeding (Figure 1D and E). Repeated electrocoagulation can cause tissue damage and perforation. Pyloric obstruction can occur at the healing stage after excessive and repeated electrocoagulation[2]. Microvessels can be coagulated by applying an electric current via the knife tip itself (Figure 1F). For large vessels (larger than 1 mm), the site of bleeding is cauterized by an electric current using hemostatic forceps or hot biopsy forceps[5]. When the bleeding site is unclear, washing helps to find the bleeding focus, and then bleeding is controlled by coagulation using the lift technique of hemostatic forceps. If massive bleeding occurs or the site of bleeding focus is unclear, hot biopsy forceps are useful[7].

Oozy bleeding control with argon plasma coagulation (APC) during or after the operation is effective. Tissue damage with APC can be reduced by submucosal injection[8]. So as the APC method is a non-contact type, it is used to control bleeding with the front or side of the probe by forced APC mode, flow 1.8 L/min, 45 watt. The disadvantage of APC is it produces considerable smoke during coagulation and frequent suction of smoke is required. However it can not be used in pulsatile bleeding[4].

Recent studies report the incidence rate about 4%, even though the rate has fallen since ESD was first used[9,10]. The rate is not decreasing any further because large and difficult lesions, which were not treated this way before, are dissected by ESD. There are no definite guidelines for treatment of perforation, even though several successful medical treatment have been reported[11]. It is important to find the perforated site and close the defect to prevent severe peritonitis with damage to other organs as soon as possible. Kaneko et al[12] reported several indications for a clipping method of ESD induced perforations. It suggest that if perforation size could be covered by a metal clip, the margins of the perforation site are smooth and clean of the margin, and one can get a clear endoscopic view[12]. ESD or EMR induced perforations are suitable for treatment in this way in most cases since usually these perforations are small with a linear shape and little contamination risk due to patient’s fasting state[9,11,13-15].

In most cases, without profound peritoneal involvement and abnormal vital signs, localized peritonitis can be improved with conservative medical treatment. Mostly, microperforation can be improved with conservative treatment[16]. When perforation is suspected during the procedure, it should be sutured with metallic clips (Figure 1G, H and I, Figure 2). Antibiotics and fasting are also needed in these conditions[17]. Conservative medical treatment includes fasting, intravenous fluid therapy, Levine tube insertion for 12 to 24 h and antibiotics supply for 2 d[11,15,18-20]. Patients can take meals after 2 to 4 d with improvement of peritoneal irritation signs, intraperitoneal free air and white blood cell counts[15,19-21]. Surgical treatment can be considered in the cases of large perforation which cannot sutured with clips and presenting as aggravated peritonitis or unstable vital signs[14,22,23]. It is an absolute indication of surgical therapy when a large amount of fluid is seen in abdominal computed tomography which suggests intraperitoneal infection by gastric contents. But surgery can be held when perforated sites are sutured promptly and peritoneal infection does not spread extensively[24]. Delayed perforation can develop within hours or days after ESD. It is manifested with abrupt onset of abdominal pain and fever and it can progress to extensive peritonitis. Excessive and repeated electrical coagulation makes burns on the submucosa and muscularis propria, and this condition may cause delayed perforation[19,25]. It is not clear whether peritoneal seeding of cancer cells is possible through perforation, the operator should be careful to prevent dissection induced perforation[26]. 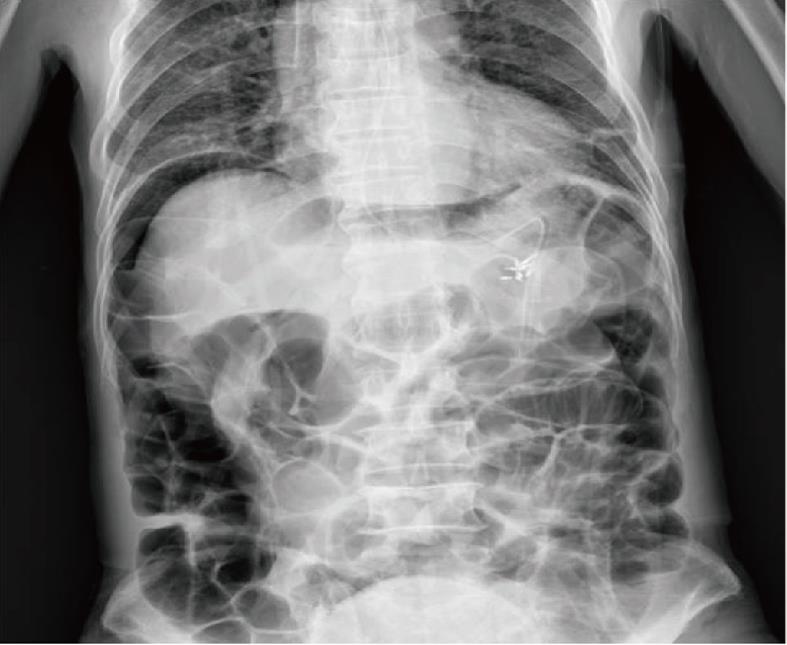 Prepyloric or pyloric stenosis: Resection of distal antral lesions can cause pyloric stenosis, especially if lesions directly invade the pylorus or cover more than two-thirds of the luminal area. Tsunada et al[27] reported five cases of pyloric stenosis. One case showing severe obstruction underwent surgical resection, the others were treated by balloon dilatation. Two patients improved after balloon dilatation but the other two patients underwent surgery due to perforation after dilatation. Due to the operation risk, like these cases, this study group recommended balloon dilatation within 8 wk after resection when lesions encircle more than four-fifths of the antral luminal area. We have to consider the possibility of severe stenosis after ESD of a laterally spreading tumor. A stricture after ESD in the antrum is not easily rescued by balloon dilatation (Figure 1J, K and L) and sometimes requires surgical intervention. Therefore, we must perform ESD with precise planning of the large antral lesion and patients should be followed by endoscopic observation after the procedure[25,27].

Transient bacteremia: Post ESD transient bacteremia can be improved with conservative treatment and empirical antibiotics in most cases. The American and European Society of Endoscopy recommends prophylactic antibiotics use before any endoscopic procedure. Using prophylactic antibiotics in high risk patients undergoing endoscopic variceal sclerotherapy or balloon dilatation is recommended due to the risk of endocarditis or other possible infections[28].

The complications of ESD can be prevented and improved with endoscopic and supportive management. Several essential things are needed to prevent or cure these complications such as a skilled operator, careful consideration of the patient’s underlying condition and accurate preventive management.