AIM: To investigate the protective effect of penehyclidine hydrochloride post-conditioning in the damage to the barrier function of the small intestinal mucosa caused by limb ischemia-reperfusion (LIR) injury.

CONCLUSION: Penehyclidine hydrochloride post-conditioning may reduce the permeability of the small intestines after LIR. Its protection mechanisms may be related to inhibiting oxygen free radicals and inflammatory cytokines for organ damage.

Limb ischemia-reperfusion (LIR) injury has been observed in atherosclerosis, thrombosis or injury to the great vessels in the extremities, severe crushing injury and surgery[1-3]. It can lead to limb edema, skeletal muscle dysfunction, and necrosis, and may further result in the dysfunction and structural damage to other organs such as the heart, lungs, brain, small intestines, and so on[4,5]. Therefore, protection against ischemia-reperfusion injury has become an important focus of research in clinical work.

In recent years, many narcotics have been used to reduce the damage caused by ischemia-reperfusion[6-8]. The new anti-cholinergic drug penehyclidine hydrochloride (PHC), reported to have protective effects against organ injury[9-11], was developed by the Institute of Pharmacology and Toxicology in China (Academy of Military Medical Sciences) to minimise side effects harmful to the cardiovascular system[12,13]. To date, no reports on the protective effects of PHC against LIR in the small intestines have been published. In this study, the serum and small intestinal tissue diamine oxidase (DAO), plasma endotoxin (reflecting the barrier function of the small intestinal mucosa), superoxide dismutase (SOD), and myeloperoxidase (MPO) activity of the small intestinal tissue, as well as serum tumor necrosis factor-α (TNF-α) and interleukin (IL)-10 levels (reflecting damage to the small intestine) were examined in rats.

The LIR model was established as follows: the rats were fasted 12 h preoperatively with unlimited drinking water; and exposed to 2% isoflurane until the loss of righting reflex, and fixed onto a sit-board on the operating table. The posterior limbs of the rats were ligated with elastic rubber bands above the greater trochanter to completely block the blood flow. Group S was anesthetized, but did not undergo ligation. Group LIR was ligated until complete ischemia of the lower limbs, and released after 3 h to restore blood flow to the posterior limbs; reperfusion was conducted for 1, 3, 6, 12, and 24 h. In group PHC, the rubber band was released after 3 h of ischemia, and then 0.15 mg/kg PHC was injected into the tail veins, followed by reperfusion for 1, 3, 6, 12 and 24 h. After the reperfusion at pre-set time points (T1-T6), the rats were sacrificed under deep isoflurane anaesthesia. All experiments were conducted according to the protocols approved by the Lanzhou University Animal Care and Use Committee. About 5 mL of blood was drawn from the inferior vena cava of the rats. The blood was centrifuged at 3000 r/min for 15 min to separate the serum, which was stored at -20°C for further target detection. The small intestines of the rats were quickly removed up to 5 cm from the ileocecal valve and washed three times with normal saline. Then, 0.5 g of the small intestines were ground into tissue homogenate in a glass homogeniser; after centrifugation at 3500 r/min for 20 min, the resultant supernatant was diluted into a 10% solution with normal saline and stored at -20°C for further target detection. The remaining small intestines were fixed in 10% formalin, embedded in paraffin, stained with hematoxylin and eosin, sectioned, and observed for pathological changes under optical microscope.

Evaluation of damage mechanism in the small intestine

Changes in the barrier function of the small intestinal mucosa 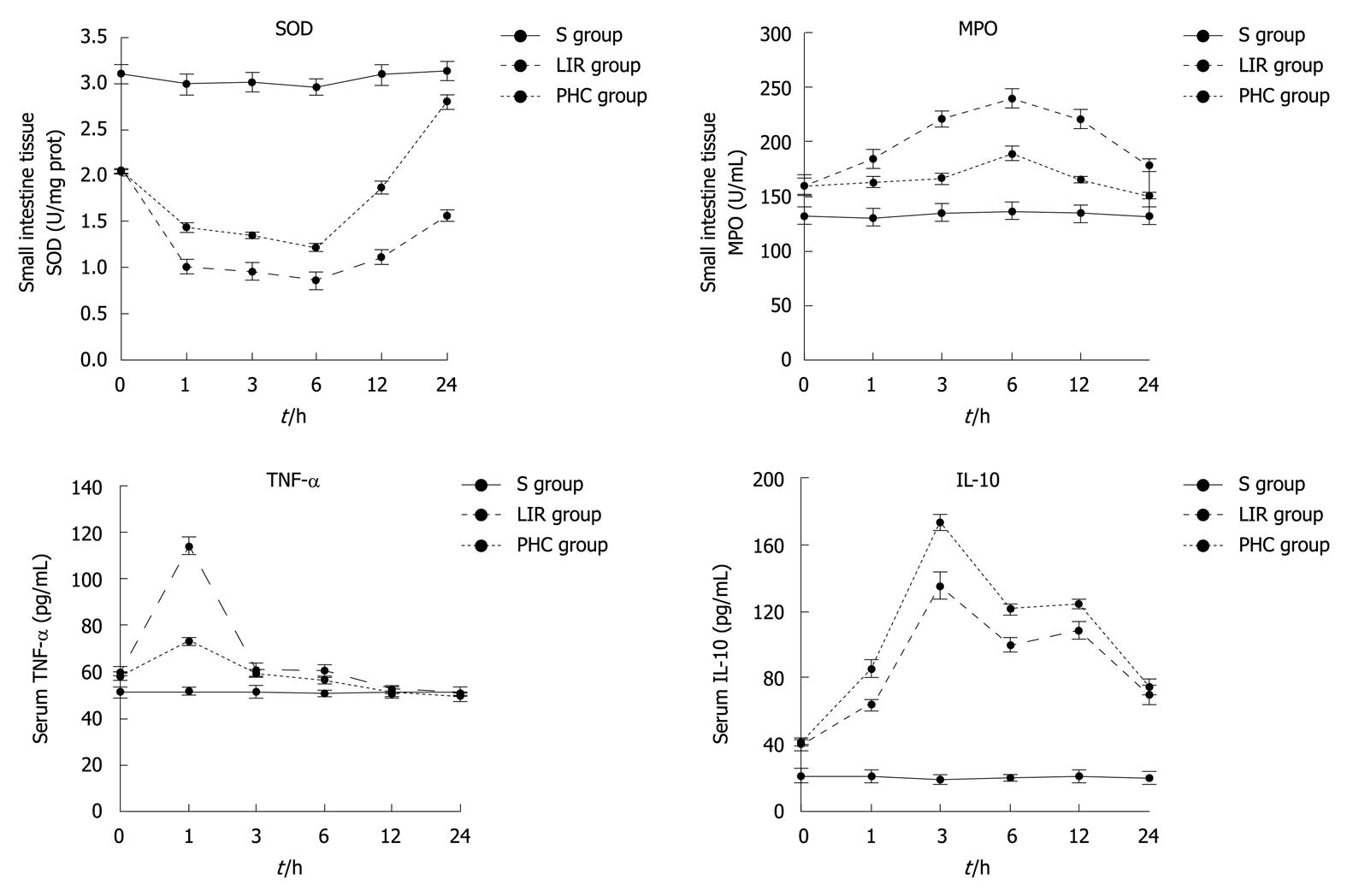 LIR injury leading to permeability changes in intestinal mucosal reperfusion injury may be closely related to the production of excessive oxygen free radicals and inflammatory cytokines[19,20,23,24]. Oxygenated free radicals appear to play a prominent role in mediating the damage associated with gastrointestinal diseases. The production of reactive oxygen metabolites in ischemia-reperfusion involves oxidases found in resident phagocytic cells, as well as microvascular and mucosal epithelial cells[25]. SOD is a key enzyme that eliminates free radicals by converting superoxide anions into hydrogen peroxide, which is then removed by glutathione peroxidase and catalase. A high amount of oxygen free radicals is generated during ischemia followed by reperfusion, which leads to excessive consumption of SOD[26]. MPO, on the other hand, is released upon activation to catalyse the formation of oxidants, which can lead to tissue damage during chronic inflammation, and serves as a major enzymatic catalyst of lipid peroxidation at inflammation sites[27]. In this paper, the small intestinal tissue SOD activity of the group LIR during reperfusion was lower than that of the group S, but higher than that of MPO. This shows that an increase in oxygen free radicals and lipid peroxidation occurs, resulting in changes in the pathophysiology of the small intestinal mucosa, causing mucosal epithelial damage, edema, and activation of inflammatory immune cells.

PHC mainly blocks muscarinic acetylcholine receptors, which shows a wide range of biological activities, including antioxidation, cytoprotective activity, and so on. PHC can inhibit lung vascular leak, inflammation and p38MAPK activation, signalling a potential role in lipopolysaccharide and alleviation of lung injuries by inhibiting apoptosis in lung tissue cells[9]. Wang et al[10] found that PHC attenuated the acute lung injury induced by endotoxin involving the nuclear factor-κB (NF-κB) pathway. The inhibition of NF-κB activation in intestinal epithelial cells prevented the increase in systemic TNF-α concentrations after intestinal ischemia and reperfusion[33]. In this study, PHC post-conditioning significantly reduced the pathological damage to the small intestine with lower limb ischemia-reperfusion injury. Although this damage was inevitable, the small intestinal injury in the group PHC was less severe than that in the group LIR. PHC post-conditioning increased SOD activity and reduced MPO activity, thereby reducing oxygen free radicals to diminish tissue damage. PHC post-conditioning can effectively lower the blood levels of DAO, endotoxin and TNF-α, which disrupt the effects of the organisation. PHC post-conditioning can also promote the production of anti-inflammatory factor IL-10, which inhibits TNF-α and reduces inflammatory cell accumulation in the local organization.

In conclusion, PHC post-conditioning can improve small intestinal mucosal injury induced by lower limb ischemia-reperfusion. It increases SOD activity to scavenge oxygen free radicals, reduces the production of inflammatory cytokine TNF-α, and increases the production of anti-inflammatory factor IL-10. The protective action of PHC post-conditioning on ischemia-reperfusion injury may be controlled by various mechanisms, which should be explored by further investigations.

Limb ischemia-reperfusion (LIR) injury can not only lead to damage of limb itself and other organs such as the heart, lungs, brain, small intestines and so on, but also may further trigger a systemic inflammatory response and multiple organ dysfunction mainly induced by dysfunction and structural damage of intestines. Penehyclidine hydrochloride (PHC) is a new anticholinergic drug with antimuscarinic, antinicotinic activities, retained potent central and peripheral anticholinergic activities. Although PHC has protective effects against septic shock and organ injury, the effects of PHC post-conditioning against LIR in the damage of the small intestines remains unknown.

Damage of the gastrointestinal tract in ischaemia-reperfusion injury is of interest because it functions not only as a target organ but also as a potential effecter of the multiple organ dysfunction associated with reperfusion injury. The authors used PHC post-conditioning to protect the damage to the barrier function of the small intestinal mucosa caused by LIR injury, because PHC post-conditioning can significantly inhibit the production of tumor necrosis factor-α (TNF-α), suppress excessive expression of inducible nitric oxide synthase, counteract lipid peroxidation and increase superoxide dismutase (SOD) level.

The authors aimed to investigate the protective effect of PHC post-conditioning in the damage to the barrier dysfunction of the small intestine caused by LIR injury. The results indicate that PHC post-conditioning may reduce the permeability of the small intestines after LIR. Its protection mechanisms may be related to inhibiting oxygen free radicals and inflammatory cytokines for organ damage.

PHC is a new anti-cholinergic drug, selectively blocking M1, M3 receptors and N receptor. Compared with other anticholinergics, the notable advantage of PHC is that it does not accelerate heart rate, and it can improve microcirculation, inhibit lipid peroxidation, attenuate the release of lysome, and depress microvascular permeability.