AIM: To investigate the role of 18F-fluorodeoxyglucose positron emission tomography (FDG-PET) in the diagnosis of small pancreatic cancer.

METHODS: This study involved 31 patients with proven invasive ductal cancer of the pancreas. The patients were divided into 3 groups according to the maximum diameter of the tumor: TS1 (maximum tumor size ≤ 2.0 cm), TS2 (> 2.0 cm and ≤ 4.0 cm) or TS3-4 (> 4.0 cm). The relationships between the TS and various diagnostic tools, including FDG-PET with dual time point evaluation, were analyzed.

CONCLUSION: These results indicate that FDG-PET with dual time point evaluation is a useful modality for the detection of small pancreatic cancers with a diameter of less than 20 mm.

Pancreatic cancer is the 5th leading cause of cancer-related mortality in Japan, with an estimated 20 000 deaths attributable to the disease[1,2]. The annual mortality rate closely approximates the annual incidence, thereby reflecting a generally short survival time associated with pancreatic cancer, which is generally less than 1 year. Cancer of the pancreas has the shortest median survival time out of all cancer types in a stage for stage basis. Early diagnosis is the most important factor for improving the overall survival and quality of life in patients with pancreatic cancer.

Recently, positron emission tomography (PET) has demonstrated superiority to computed tomography (CT), ultrasonography (US), and endoscopic US (EUS) in its sensitivity and specificity in diagnosing pancreatic cancer[3-6]. Furthermore, the metabolic activity of the tumor may be of prognostic significance. We have been reported the efficacy of delayed additional 18F-fluorodeoxyglucose PET (FDG-PET) imaging in the differential diagnosis of malignant from benign lesions in patients who are suspected of having pancreatic cancer[7]. Furthermore, the detection rate of liver metastases smaller than 1 cm in diameter from pancreatic cancer was only 33% on early image and 58% on delayed image[7]. However, the role of dual time point FDG-PET in the diagnosis of small pancreatic cancers has yet to be established.

Therefore, the present study investigated whether small cancers of the pancreas could be accurately diagnosed by FDG-PET with dual time point evaluation.

Thirty-one patients with pancreatic carcinoma suspected on the basis of conventional radiological studies (22 males and 9 females; mean age, 65 years; age range, 44-82 years) and who underwent FDG-PET between 2003 and 2007 were retrospectively selected. Patients were excluded from this study if they had poorly controlled diabetes mellitus (presenting with blood glucose level > 200 mg/dL prior to PET imaging). Conventional radiological staging was performed by means of CT or magnetic resonance imaging (MRI). The location of the cancer was in the head of the pancreas in 17 patients and in the body and tail in 14 patients. Twelve of the 31 cancers were diagnosed to be unresectable, and 19 patients eventually underwent surgery with a curative intention, although the cancer turned out to be unresectable in 7 because of intraoperative findings.

The patients were divided into 3 groups according to the maximum diameter of the tumor: TS1 (maximum size ≤ 2.0 cm), TS2 (> 2.0 cm and ≤ 4.0 cm) or TS3-4 (> 4.0 cm) as indicated by the classification system of the Japan Pancreas Society. FDG-PET was analyzed semi-quantitatively using the standardized uptake values (SUVs). The sensitivity of diagnosing pancreatic cancer was examined for FDG-PET, CT, MRI and the serum levels of carcinoembryonic antigen (CEA) and carbohydrate antigen 19-9 (CA19-9) with regard to the size of the tumor. The details of SUVs, the histological findings and correlation of CT findings were evaluated in patients with TS1 pancreatic cancer. This study was performed retrospectively by collecting and analyzing data from the patient records.

The FDG-PET images were acquired with a PET machine (Siemens EXACT HR+, CTI, Knoxville, TN, USA). The patients were required to fast for at least 4 h before PET imaging. The emission images were acquired (early image) 1 h after the intravenous administration of 5 mCi of FDG. Delayed PET emission images of the upper abdomen were acquired at 2 h after administration of 18F-FDG, using 2 or 3 bed positions with a 3-min acquisition at each[7]. This acquisition was immediately followed by a transmission scan of the same transverse planes, using a 2-min acquisition at each bed position. The early and delayed PET images were reviewed independently and consecutively by 2 radiologists with extensive experience in FDG-PET imaging. PET images were compared with the corresponding CT and/or MRI images for accurate anatomical identification of the tumor. The findings were considered to be positive when both radiologists strongly suspected malignant disease. In addition, the images were analyzed semi-quantitatively using the SUV, as reported elsewhere. Briefly, for semi-quantitative analysis, a region of interest was placed over the entire FDG-avid lesion including the largest amount of radioactivity using the transverse PET image. The SUV was calculated as: SUV = (activity in region of interest in mCi)/(injected dose in mCi/weight in kg).

CT studies were performed with a multidetector row CT scanner (Aquilion, Toshiba, Tokyo, Japan). Helical images of the abdomen were routinely obtained and reconstructed with 5 mm thickness. After pre-contrast CT scans, arterial dominant phase images of dynamic CT were obtained starting 40 s after the beginning of the intravenous bolus injection (3 mL/s) of 100 mL of iodized contrast medium at 350 mg/mL. The pancreatic phase and the late phase (near equilibrium phase) were also obtained, starting at 60 and 180 s after injection, respectively. The CT images were interpreted independently and consecutively by 2 radiologists with extensive experience of more than 10 years in CT scanning. The findings of the CT scans were considered positive when both radiologists strongly suspected malignant disease due to a discrete low-attenuation mass within the pancreas.

The χ2 test was employed for a statistical comparison of the sensitivity of FDG-PET, CT, MRI, CEA and CA19-9. The Student t test was used to compare the values of the SUV between the groups. All statistical analyses were performed using SPSS software (SPSS, Chicago, USA). A P value < 0.05 was considered to be statistically significant.

Although the sensitivity was higher for larger tumors, the SUV was not significantly associated with the TS factor. The mean SUV did not show a significant difference in relation to the TS (TS1: 5.8 ± 4.5, TS2: 5.7 ± 2.2, TS3-4: 8.2 ± 3.9), respectively. The diagnosis of pancreatic adenocarcinoma was histologically confirmed in all patients with TS1 cancer (Table 3). The tumor was well differentiated in 4 patients and poorly differentiated in one patient. The tumor diameter ranged from 13 to 20 mm. All the TS1 tumors showed higher SUVs in the delayed phase compared with that in the early phase. The SUV pattern suggested the small lesions were malignant tumors.

Representative images of one patient (case 4 in Table 3) with TS1 pancreas cancer are shown in Figure 1. A 68-year-old male was transferred to our hospital for evaluation and further management of diabetes mellitus. A whole body FDG-PET image shows apparent increased uptake in the tumor (delayed point SUV, 3.06) (Figure 1A). An axial CT image with contrast enhancement shows a small low-density mass in the pancreas body (Figure 1B). The histological findings (HE staining) of the pancreas revealed invasive ductal cancer in the body of pancreas with a diameter of 18 mm (Figure 1C). 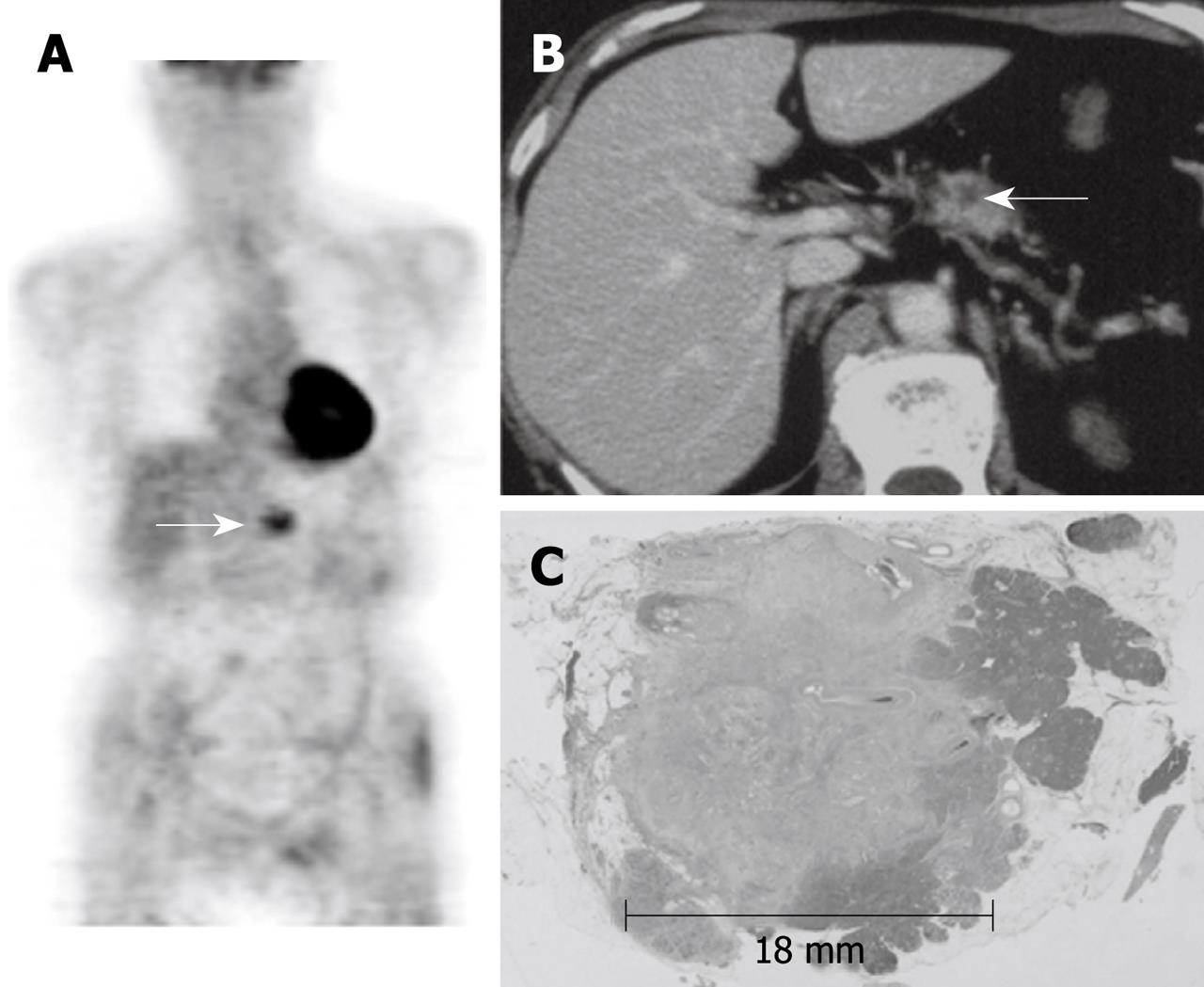 The increased uptake of FDG due to the enhanced glucose metabolism of cancer cells is a sensitive marker of tumor viability or biological behavior. The SUV is an independent prognostic factor in various malignant tumors. Sperti et al[16] demonstrated that a high SUV (> 4.0) was associated with shorter survival. Maemura et al[17] reported that pancreatic tumors with distant metastases showed significantly higher SUV levels than tumors without metastases. The present study showed the SUVs of pancreatic cancer did not differ significantly in relation to tumor size. The results indicate that FDG-PET may, therefore be useful even in patients with small pancreatic cancers that can not be visualized by either CT or other modalities. The present study did not provide data on the specificity because there were no benign lesions. In our previous study[7], the specificity of FDG-PET for detection of pancreatic cancer was 65%. Benign lesions such as chronic pancreatitis and autoimmune-related pancreatitis can also accumulate FDG and result in false-positive interpretations of PET studies. Further studies including benign lesions are required to clarify the diagnostic accuracy of FDG-PET.

These results indicate that FDG-PET is a useful modality for the detection of small pancreatic cancers with a diameter of less than 20 mm. However, this study was limitated due to the small population of patients. As a result, further prospective studies with PET/CT involving a larger population of patients should therefore be conducted to substantiate the results of this study.

Early diagnosis is the most important factor for improving the overall survival and quality of life in patients with pancreatic cancer. Positron emission tomography (PET) has demonstrated superiority to computed tomography (CT), ultrasonography (US), and endoscopic US (EUS) in its sensitivity and specificity in diagnosing pancreas cancer.

Delayed additional 18F-fluorodeoxyglucose PET (FDG-PET) imaging is a useful method in differential diagnosis of malignant from benign lesions. However, the role of dual time point FDG-PET in the diagnosis of small pancreatic cancers has yet to be established.

The ability to diagnose the early stage of pancreas cancer can be improved by using the dual time point FDG-PET in combination with CT, US and EUS. Early diagnosis is the most important factor for improving the overall survival and quality of life in patients with pancreatic cancer.

Dual time point FDG-PET: FDG, a glucose analog, is taken up by high-glucose-using cells such as brain, kidney, and cancer cells, where phosphorylation prevents the glucose from being released intact. FDG-PET can be used for diagnosis, staging, and monitoring treatment of cancers. PET scans detect the areas with increased glucose uptake. The standardized uptake value of FDG is measured from two sequential time points.

This article is a retrospective analysis concerning a diagnostic value of PET for small pancreatic cancer. It is well-written but there are several issues to be resolved.