Transcatheter arterial chemoembolization (TACE) has become the standard treatment modality for unresectable hepatocellular carcinoma (HCC). Nonetheless, the clinical outcomes in patients with unresectable HCC are often unsatisfactory, especially in those with recurrent HCC. H101, an E1B gene deleted adenovirus, is known to have a significant antitumor activity. In addition, local injection of H101 can enhance the effect of antitumor therapies (chemotherapy and radiotherapy). Transarterial H101 gene injection in combination with TACE may help to control refractory and recurrent HCC. In this study, we report a 55-year-old patient with recurrent HCC which was treated with transarterial injection of H101 in combination with TACE, leading to a good clinical prognosis of the patient.

It is difficult to eradicate hepatocellular carcinoma (HCC) because of its repeated recurrence in the liver. Surgical resection and transcatheter arterial chemoembolization (TACE) are the mostly used effective modalities for HCC, but it still frequently recurs after treatment with such modalities[1,2]. Gene therapy for tumors is a new hope in the 21st century. It is coming to be widely used in clinic and has achieved relatively well results especially when it is directly injected into the tumor[3-9]. Since combined TACE and gene injection may help to manage recurrent HCC, we tried to use the H101 gene in combination with TACE to treat our patient with recurrent HCC and achieved a good clinical prognosis.

A 55-year-old man was diagnosed with HCC in the right liver lobe, which was histologically proven (Figure 1A) in June 2006. The patient underwent six rounds of TACE from June 2006 to September 2008 (Figure 1B). His α-fetoprotein (AFP) level was 595.4 ng/mL after the six rounds of TACE, and decreased to 10.99 ng/mL after a partial hepatectomy. In February 2009, a recurrent nodule was found in the remnant liver at a routine postoperative computed tomography (CT) scan. At that time, his AFP level was 724 ng/mL. Because the effect of TACE was poor on HCC (Figure 2A), we decided to treat the patient with combined TACE and H101, a recombinant human type-5 adenovirus (Ad5), in which the E1B-55 kDs gene is totally deleted (Oncorine, Shanghai Sunway Biotech, China). First, we injected 5-fluoro-2-deoxyuridine (1.0 g), vinorelbine (40 mg), and cisplatin (80 mg) into the celiac trunk. Then, H101 and iodized oil were injected into the artery that supplies the tumor. A total of 1 × 1012 virus particles (VP) and 10 mL iodized oil were administered. 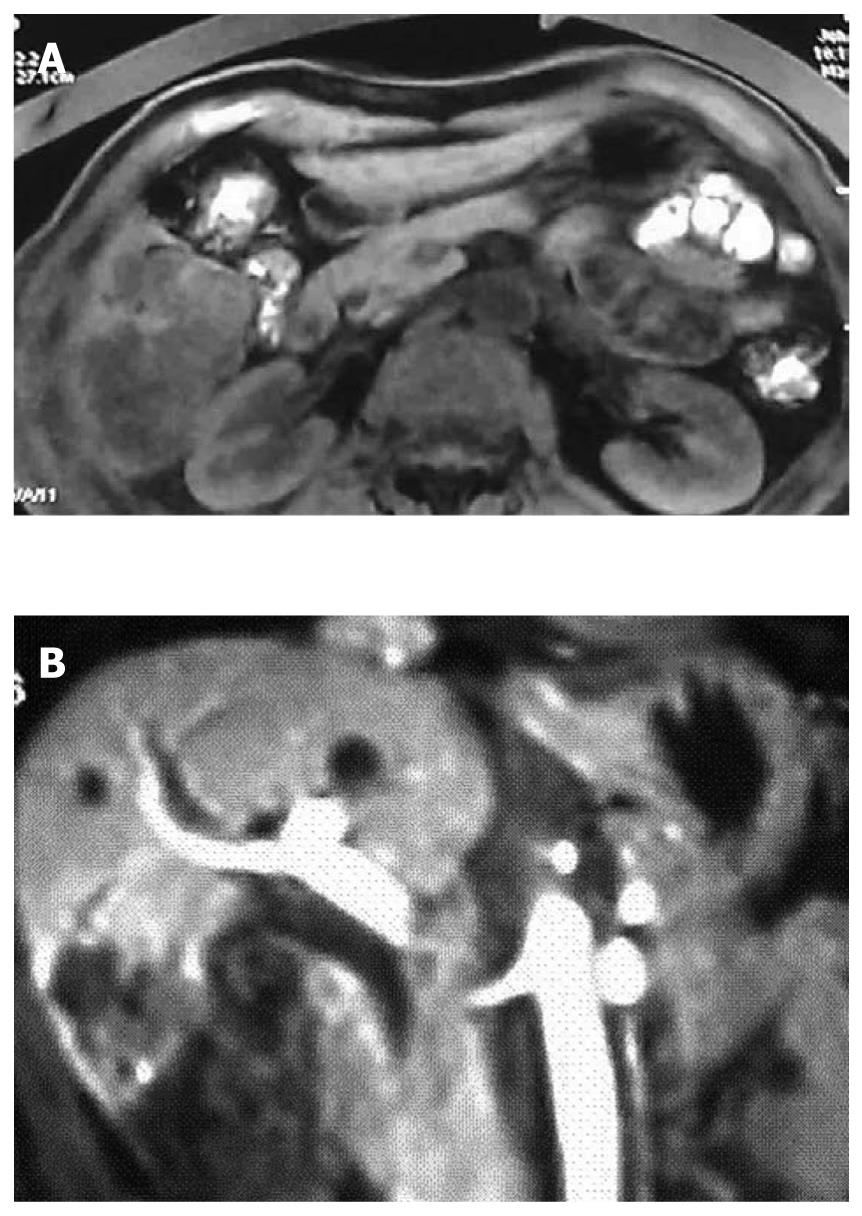 The patient had no discomfort after the procedure. Two months later, routine follow-up CT showed a fairly good result (Figure 2B) and the AFP level in the patient decreased to 338.4 ng/mL from 724 ng/mL before the treatment. We repeated this therapy 2 times at 2-mo interval. At the last admission, abdominal CT demonstrated complete deposit of oil with no signs of recurrence (Figure 2C). Furthermore, his AFP was within the normal reference range (4.56 ng/mL).

Eighteen months following the last H101/TACE treatment, the patient showed no evidence of recurrence and no abnormal liver function, but had a normal serum AFP level. The AFP levels in the patient during the therapy are listed in Table 1.

Although TACE has become the standard treatment modality for unresectable HCC, it is frequently unsuccessful[1,2]. Similarly, HCC recurs frequently following its resection. Although TACE was effective in our patient, HCC recurred and failed the seventh TACE. The recurred HCC was unresectable because it occupied the entire caudate lobe and was close to the vena cava and abdominal aorta. Thus, H101 in combination with TACE was attempted for the patient with a fairly good outcome without any complications. From Table 1 and Figure 3, we can see that the AFP level in the patient decreased significantly following treatment with TACE plus H101. Both the initial series of TACE and tumor resection failed to prevent recurrent HCC although AFP was controlled, whereas combined H101 and TACE appeared to be effective and well-tolerated.

Figure 3 Changes in α-fetoprotein levels during and after treatment.

H101 is a recombinant human type-5 adenovirus in which E1B-55 kDs gene is totally deleted. The H101 virus produced by Shanghai Sunway Biotech also contains a deletion in the E3 region with a significant antitumor activity. This recombinant adenovirus has a replication-selective property and replicates only in tumor cells. Before modification, the E1B region of the wild adenovirus type 5 expresses early gene products that bind to and inhibit the function of p53, a tumor suppressor. Deletion or mutation of the E1B region confers p53-selective replication of oncolytic viruses which infect tumor cells and induce massive accumulation of normal p53. By this way, the adenovirus causes direct cytotoxicity only to tumor cells during replication. The E3 region is related to the inhibition of host immunity, which enhances the virus replication and spread in tumors[3,4]. The virus replication and spread can be enhanced by repeated injection of H101. By sacrificing the spread ability, the virus may activate the host immune response to virus-infected tumor cells and help the host immune system to recognize tumor cells, thus benefiting patients under such a therapy. Metastasis is prevalent in patients with malignant tumors, leading to treatment failure and death of patients. Moreover, patients may have more than one tumor lesion, and some of these lesions may be hard to reach in order to be injected with H101. Therefore, the ability of H101 to activate the host immune response seems crucial. Treatment with the E3 region deleted adenovirus, H101, may have additional benefits to patients.

H101 is formulated as a sterile viral solution in phosphate buffered saline and kept at -20°C. Each vial contains 0.5 mL virus solution with 5 × 1011 viral particles and titered less than 1/60 of 50% tissue culture infectious dose. Sterile and purified viruses were produced for clinical use by Shanghai Sunway Biotech (Shanghai, China), and tested for the titer, sterility, and general safety by National Institute for the Control of Pharmaceutical and Biological Products (Beijing, China). Its safety has been demonstrated in a number of clinical trials[5-8].

Although the anticancer activity of H101 has been proved in a wide type of advanced cancer by intra-tumor injection, its clinical efficacy against liver cancer has been rarely reported[9-11]. Transcatheter arterial injection of H101 was effective against liver cancer in our patient, suggesting that H101 in combination with TACE is useful for recurrent HCC. However, subsequent large, multi-center randomized, controlled studies are needed to facilitate the introduction of genetically engineered and reinforced viruses as novel therapeutic platforms for the treatment of cancers.