Pure red cell aplasia (PRCA) is a rare hematological disorder which is characterized by severe anemia, reticulocytopenia and almost complete absence of erythroid precursors in bone marrow. The pathophysiology of PRCA may be congenital or acquired. To our knowledge, there is only one case report in the English literature of PRCA after pegylated interferon combination therapy for chronic hepatitis C. We report a second case of PRCA after pegylated interferon combination treatment for chronic hepatitis C. The diagnosis of PRCA was confirmed by the typical findings of bone marrow biopsy. The possible etiologies of our case are also discussed in this paper.

Pure red cell aplasia (PRCA) is a rare hematological disorder which is characterized by severe anemia, reticulocytopenia and almost complete absence of erythroid precursors in bone marrow[1]. Patients typically present with symptoms of severe anemia in the absence of hemorrhagic phenomena. Common causes of PRCA include human parvovirus B19 infection, lymphoproliferative disorder, humoral or cellular immunity, production of erythropoietin-neutralizing antibody, and drugs such as ribavirin and standard interferon[1-5]; however, to our knowledge, there is only one case report in the English literature of PRCA after pegylated interferon combination therapy for chronic hepatitis C[6]. We report a second case of PRCA during combination therapy for chronic hepatitis C.

A 69-year-old male was referred to our hospital for treatment of chronic hepatitis C. His past medical history was remarkable for megaloblastic anemia due to vitamin B12 deficiency. He received regular vitamin B12 injection therapy with a stable hemoglobin level of around 11 g/dL. At initial presentation, elevated aminotransferase levels and positive antibody to hepatitis C virus were detected. HCV RNA level was 85 000 IU/mL. The genotype was 2. The pretreatment hemoglobin level was 11.2 g/dL and the reticulocyte count was 1.8% (normal range 0.5-1.5%). Serum level of vitamin B12 was 288 pg/mL (normal range 272-1078 pg/mL). Serum level of folic acid was 11.0 ng/mL (normal range 5-26 ng/mL). Treatment with peginterferon alfa-2a 180 ug weekly and ribavirin 800 mg daily was started. After four weeks of treatment, the ribavirin dose was reduced to 600 mg due to a prominent decrease in the hemoglobin level to 8.4 g/dL. HCV RNA level at the 4th wk was undetected. Three weeks after dose reduction of ribavirin, the hemoglobin level continued to drop to 6.9 g/dL. The combination therapy was discontinued after 7 wk of treatment due to the patient’s intolerance of anemia (Figure 1). Serum levels of indirect bilirubin, lactate dehydrogenase and haptoglobin level remained normal during combination treatment. Parvovirus serologies revealed positive immunoglobin (Ig) G but negative IgM antibodies, which were consistent with past exposure.

He received follow up at a previous institution after termination of combination treatment. However, his anemia persisted and became transfusion-dependent. Blood transfusion with packed red blood cells was administered every month (Figure 1). Three months after discontinuation of combination treatment, the hemoglobin dropped to 5.5 g/dL and the reticulocyte count was 0.1% (normal range 0.5-1.5%). Levels of vitamin B12 and folic acid were within the normal range. Bone marrow biopsy revealed severe hypocellularity of 10% (Figure 2) with normal maturation of myeloid precursor cells (Figure 3). Erythroid precursor cells were markedly decreased with a ratio of myeloid to erythroid precursors of 10. The diagnosis of PRCA was made based on these histopathological findings. Oral methylprednisolone 15 mg daily was administered. After four weeks of oral methylprednisolone therapy, his hemoglobin level increased to 9.2 g/dL and the reticulocyte count increased to 1.7% (Figure 1). He needed no further blood transfusions in the following months. 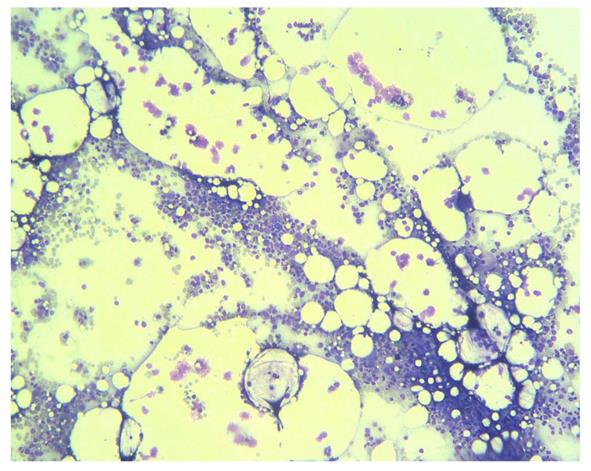 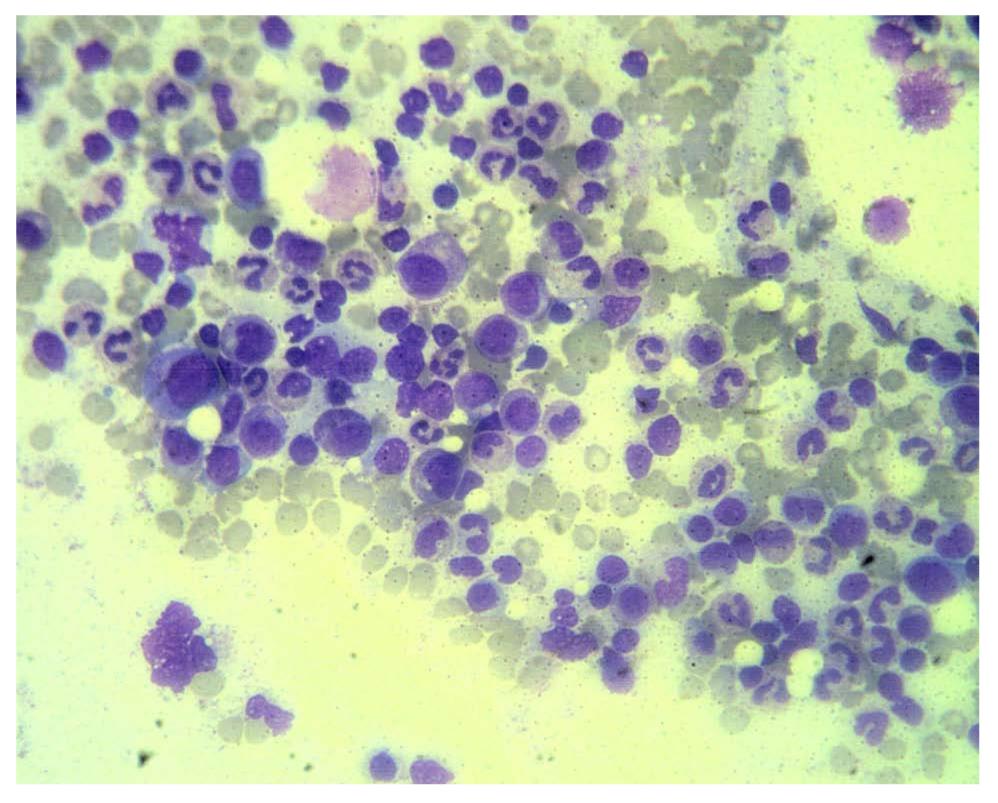 Figure 3 Photomicrograph of higher magnification showing normal maturation of myeloid precursors and absence of erythroid precursors in this field (HE, x 100).
DISCUSSION

The pathophysiology of PRCA is heterogenous, which may be congenital or acquired[1]. Diamond-Blackfan anemia is a congenital form of PRCA with genetic defects affecting erythropoietic lineage. Acquired causes of PRCA include human parvovirus B19 infection, lymphoproliferative disorder, humoral or cellular immunity, production of erythropoietin-neutralizing antibody, and drugs such as ribavirin and standard interferon[1-5]. Other reported causes of PRCA include hepatitis A infection[11], malignant thymoma[12], and systemic lupus erythematosus[13]. The diagnosis of PRCA is based on bone marrow findings such as severe hypocellularity, a markedly elevated myeloid: erythroid ratio, and severe decreased erythroid precursors[6,14]. With regard to the treatment of PRCA, corticosteroid therapy is considered the treatment of first choice, although relapse is not uncommon[15]. In the study of Clark et al[16], 80% of patients relapsed as the dosage of steroid was tapered during the first year after remission. In contrast, cyclosporine A is suggested when the long-term feasibility of maintenance is considered[15].

As to the etiology of PRCA in our case, several possibilities should be considered. Firstly, although HCV infection itself has been associated with PRCA[17], the HCV RNA in our case was undetected at the 4th wk of combination treatment. Furthermore, parvovirus serologies revealed positive IgG but negative IgM antibodies, which excluded parvovirus infection as the cause of PRCA in our case. Secondly, although ribavirin-induced PRCA has been reported previously[3], the anemia in our case might not have been caused solely by ribavirin since the anemia persisted for 3 mon after discontinuation of ribavirin. Drug-induced PRCA generally resolves within 1-2 wk after removal of the causative agent[18]. Thirdly, one might consider the possible association of underlying pernicious anemia with PRCA in this case. Pernicious anemia is generally considered an autoimmune disease resulting in deficiency of intrinsic factor and subsequent vitamin B12 deficiency[19]. Coexistence of pernicious anemia and PRCA in the same patient has been reported in earlier literature[20-22], suggesting that an immunological process is involved in the pathogenesis of PRCA in these cases. In our case, serum levels of vitamin B12 did not alter significantly before and after combination treatment, thus excluding vitamin B12 deficiency as the cause of severe anemia after combination treatment. Therefore, it is reasonable to assume that pegylated interferon might have played a role in the pathogenesis of PRCA in our case. Several studies have also suggested that interferon may play a role in the development of acquired PRCA[4,5,23]. However, further investigations may be needed to determine whether PRCA is caused by pegylated interferon alone or by combination treatment.

In conclusion, this case highlights the importance of considering PRCA when severe anemia associated with reticulocytopenia develops during the combination treatment of patients with chronic hepatitis C.