METHODS: One hundred gastric cancer patients who underwent gastrectomy were enrolled in this study. The serum concentrations of MMP-1 and TIMP-1 in these patients and in fifty healthy controls were determined using an enzyme-linked immunosorbent assay.

Matrix metalloproteinases (MMPs) are a family of zinc-dependent neutral endopeptidases that play a significant role in the degradation of all matrix partitions, which are crucial for malignant tumor growth, invasion, and metastasis[1,2]. MMPs are inhibited by tissue inhibitors of metalloproteinase (TIMPs), which are secreted proteins. TIMPs bind to enzymatically active MMPs at a 1:1 molar stoichiometry, thus inhibiting proteolysis[3]. The role of TIMPs in the imbalance of the extracellular matrix is significant and may inhibit or stimulate tumorigenesis[4].

MMP-1 is also known as collagenase (EC 3.4.23.7)[5]. Saffarian et al[6] showed that activated MMP-1 acts by processing on the collagen fibril. The biological implications of MMP-1 acting as a molecular retainer, tied to the cell surface, prompted recent mechanisms for its status in tissue remodeling and cell-matrix interaction to be proposed. MMP-1 in the stromal tumor microenvironment can change the behavior of cancer cells to promote cell migration and invasion[7].

TIMP-1 is a 28.5 kDa glycoprotein that has been studied in many human malignancies, including gastric cancer[8]. TIMP-1 mRNA expression is increased in gastric, esophageal, and pancreatic cancer[9-11]. TIMP-1 is present in human peripheral blood and body fluids[12]. MMP-1 and TIMP-1 levels have been studied in plasma or serum of patients with cumulative malignancies[13,14].

Our study was carried out to analyze serum MMP-1 and TIMP-1 levels in gastric cancer patients and to investigate their clinicopathological correlations.

A total of 100 patients who underwent gastrectomy with gastric cancer between December 2007 and April 2010 were enrolled. Their median age was 58.5 years (range, 34-78 years), and the ratio of men/women was 47/53. There were 50 healthy volunteer controls without family history of cancer, whose average age was 56 years (range, 48-65 years) (22 men, 28 women). Peripheral venous blood of patients and controls was taken before gastrectomy and stored at 4°C. Blood from controls was taken on the day of a physical examination. The blood samples were centrifuged 1000 rpm, in 15 min, at 20°C to separate the serum, which was stored at -70°C until analysis. The mean storage time of all samples was 2 mo (45-80 d).

As appropriate, the Mann-Whitney U test or Fisher’s exact test was used for group comparisons. Correlations between parameters were tested by Spearman’s correlation coefficient. A P < 0.05 was considered statistically significant. 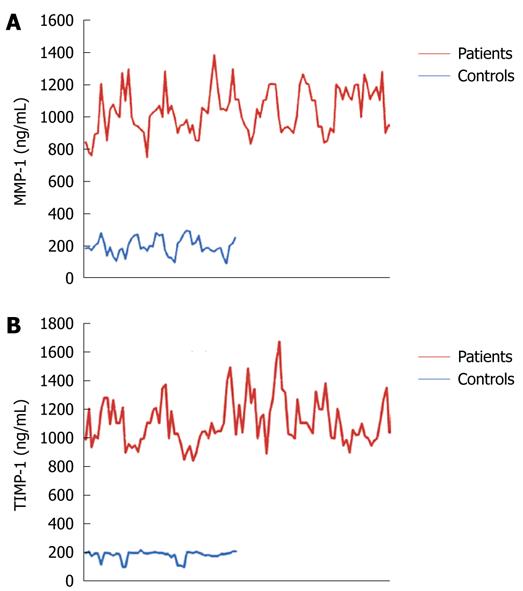 In our study, we investigated MMP-1 and TIMP-1 levels in gastric cancer patients and compared them with a control group. We also investigated their associations with clinicopathological features.

Matrix metalloproteinases are involved in many normal biological processes (e.g. embryonic development, blastocyst implantation, organ morphogenesis, nerve growth, ovulation, cervical dilatation, postpartum uterine involution, endometrial cycling, hair follicle cycling, bone remodeling, wound healing, angiogenesis, and apoptosis) and pathological processes (e.g. arthritis, cancer, cardiovascular disease, nephritis, neurological disease, breakdown of the blood brain barrier, periodontal disease, skin ulceration, corneal ulceration, liver fibrosis, emphysema, and fibrotic lung disease). Although the main function of matrix metalloproteinases is elevation of ECM during tissue resorption and progression of many diseases, it is obvious that matrix metalloproteinases also alter the biological functions of ECM molecules by definite proteolysis. MMP-1 and TIMP-1 are thought out to be involved in dissemination of cancer cells by dissolving the ECM, but they are also important in creating an environment that supports the initiation and growth of primary and metastatic tumors. These effects may be associated with proteolytic release of growth factors and/or modification of cellular environments[16].

MMP-1 is associated with the primal pace of invasion and angiogenesis in gastric cancer, which may make it a useful marker for prognosis. TIMP-1 is more simply released into the blood[24]; therefore, the sensitivity of the assay is higher than that for MMP-1.

High blood levels of MMP-1 and TIMP-1 are associated with poor prognosis of malignancies. Thus, they might useful as markers for malignant potential (i.e. tumor growth and/or differentiation) for cancer. Notably, serum TIMP-1 levels have been established as an independent factor in gastric cancer[23].

Some metalloproteinases have been shown to degrade over time when measured in stored blood samples. However, we do not think that such protein decay is a significant factor when proteins are stored for 2 mo. This assumption is supported by the work of Papazoglou et al[25], Kardeşler et al[26] and Karapanagiotidis et al[27].

This study demonstrated that high serum MMP-1 and TIMP-1 levels in gastric cancer patients are significantly associated with disease progression. Their levels are important markers of tumor progression or advanced tumor stages.

The incidence of gastric cancer is rising worldwide. Collagenases may play a role in degradation of the cell matrix, possibly leading to growth of malignant tumors, lymph node metastasis, increased depth of invasion and other metastases.

High blood levels of MMP-1 and TIMP-1 are associated with poor prognosis of malignancies, making them potentially useful biomarkers for the malignant potential (i.e. tumor growth and/or differentiation) of cancer. These effects may be associated with proteolytic release of growth factors and/or modification of tumor cells.

The date generated in this paper might be used to explain the development of gastric cancer, to prevent metastasis, and to aid early diagnosis.

MMP-1 and TIMP-1 zinc-dependent neutral endopeptidases. The role of MMP-1 and TIMP-1 in the imbalance of the extracellular matrix is significant and may inhibit or stimulate tumorigenesis. These effects have been demonstrated, and these molecules may represent useful markers of tumorigenesis.

It is a nice study, with interesting results.