Endoscopic ultrasonography is an established diagnostic tool for pancreatic masses and chronic pancreatitis. In recent years there has been a growing interest in the worldwide medical community in autoimmune pancreatitis (AIP), a form of chronic pancreatitis caused by an autoimmune process. This paper reviews the current available literature about the endoscopic ultrasonographic findings of AIP and the role of this imaging technique in the management of this protean disease.

Endoscopic ultrasonography (EUS) is superior to standard imaging techniques in detecting pancreatic cancer or masses and in the assessment of early parenchymal changes in chronic pancreatitis[1,2]; however, its role in the diagnosis of autoimmune pancreatitis (AIP) has yet to be standardized, even though its high accuracy together with its safety make it a promising tool in the management of this disease.

To date, no consensus about the diagnosis of AIP has been reached[3]. Several criteria have recently been proposed, reflecting the different clinical entities that AIP can adopt worldwide[4-9]. The diffuse form of AIP has typically been included in the first set of criteria[4], and in 2008 only, a focal pancreatic enlargement evident upon imaging was classified as a form of AIP.

Obstructive jaundice is the most common presentation of AIP and, together with biochemical and imaging features, can mimic neoplastic conditions[10,11]. Because AIP is a benign disease, a definitive diagnosis without the need for surgery is desirable.

AIP can present with extrapancreatic lesions, the most frequent being IgG4-related sclerosing cholangitis (IgG4-SC), followed by hilar lymphadenopathy[12].

EUS can display both of these conditions in addition to parenchymal, ductal and vascular lesions. Moreover, this technique offers the advantage over other diagnostic tools of allowing clinicians to perform biopsies to achieve a definitive diagnosis[13-16].

In this article, we describe the EUS findings of AIP (Table 1) by reviewing the currently available literature in this field.

The predominant finding in the diffuse form of AIP is a diffuse pancreatic enlargement with altered echotexture (Figure 1)[14,15]. A recent retrospective study proposed to differentiate early from advanced stage AIP according to EUS findings[15]. In 19 patients with AIP, the presence of parenchymal lobularity and a hyperechoic pancreatic duct margin were significantly correlated with early stage AIP[17]. Other EUS findings that are indicative of AIP, such as reduced echogenicity, hyperechoic foci and hyperechoic strands (Figure 1), are found in both AIP stages[17]. Should these results be confirmed in prospective studies, EUS would acquire an essential role in the identification of early stage AIP, which is characterized by a prompt response to steroid therapy. Stones and cysts similar to those described in chronic alcoholic pancreatitis can occur in the late stage of AIP[18]. 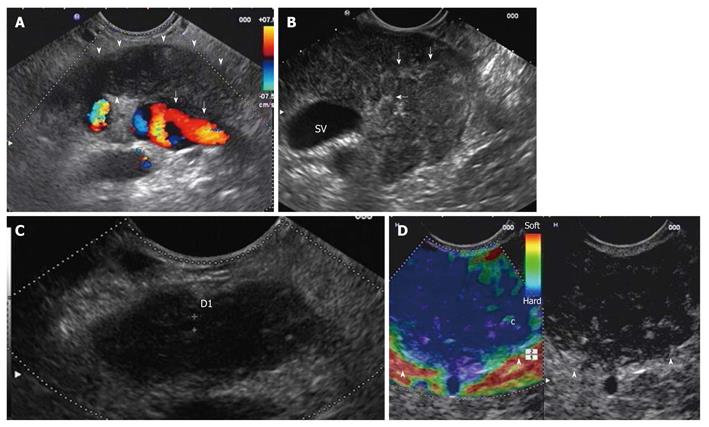 The Sahai criteria for chronic pancreatitis were found to be inadequate to evaluate parenchymal and ductal changes in AIP[19]. According to the scoring system, a series of 25 patients with AIP were classified as normal or displaying mild disease[16].

In the focal form of AIP a solitary (Figure 2), irregular hypoechoic mass, generally located in the head of the pancreas, is observed[13-15]. In addition, upstream dilatation of the main pancreatic duct could be observed[13,17]. In this setting, the overlap with EUS findings of pancreatic cancer is remarkable, and EUS-elastography (Figure 1) can provide further information about pancreatic lesions. In a case-control study of five patients with AIP, EUS-elastography showed a typical and homogeneous stiffness pattern of the focal lesions and of the surrounding parenchyma that is different from that observed in ductal adenocarcinoma[20].

Figure 3 Biliary and peripancreatic findings in autoimmune pancreatitis. Autoimmune pancreatitis presenting with jaundice: A: Endoscopic ultrasonography (EUS) shows a dilated common bile duct (c) upstream to a distal funnel-shaped stenosis; EUS demonstrates the diffuse thickening of the biliary wall (between arrows) with “sandwich-pattern”, either of common bile duct or of cystic duct (arrowheads). This thickening is equally visible both in the dilated region of the common bile duct; B: In the distal strictured tract (arrows); C: After contrast administration (Sonovue, Bracco) the biliary wall shows an early and persistent enhancement (arrowheads); D: EUS shows the same thickening of the gallbladder (g) wall (arrowheads); E: Enlarged lymph nodes to the hepatic hylum (arrows).

A further application of EUS is intraductal ultrasonography (IDUS), which can be performed during endoscopic retrograde cholangiography for the characterization of biliary stenosis. Naitoh et al[22] recently evaluated IDUS findings in 23 patients with IgG4-SC. They found that a circular, symmetric wall thickness, smooth inner and outer margins and a homogeneous intermediate layer in the stricture were significantly more common in AIP than in cholangiocarcinoma. The wall thickness in IgG4-SC in regions of non-stricture on the cholangiogram was significantly greater than that in cholangiocarcinoma and therefore a bile duct wall thickness exceeding 0.8 mm in regions of non-stricture on the cholangiogram was highly suggestive of IgG4-SC. Contrast enhancement of conventional EUS and IDUS showed an inflammatory pattern of the bile duct wall, with a long-lasting enhancement starting in the early phase instead of the poor enhancement found in bile duct cancer (Figure 3)[21].

Hilar lymphadenopathy is one of the most frequently described extrapancreatic lesions[12]. Other sites of enlarged lymph nodes are the peripancreatic and celiac regions. EUS nodal features that accurately predict nodal metastasis have been previously identified in patients with esophageal cancer[23]; they include size (> 1 cm in diameter on the short axis), hypoechoic appearance, round shape, and smooth border. However, these conventional EUS criteria have proven inaccurate for staging non-esophageal cancers, including those that are biliopancreatic[24,25]. EUS can detect single or multiple enlarged lymph nodes in patients with AIP (Figure 3), reflecting the underlying inflammatory process, which can involve extra-pancreatic organs[14,15].

Hoki et al[16] reported a significant difference in detection of lymphadenopathy by EUS imaging over CT (72% vs 8%) in patients with AIP. Moreover, in the same series, a trend toward a higher prevalence of lymphadenopathy in AIP compared to pancreatic cancer was reported.

In the absence of specific nodal features indicating malignancy, the differential diagnosis with biliopancreatic neoplasms is arduous but can be achieved by evaluating the broad spectrum of clinical and imaging data of AIP patients.

EUS criteria for vascular invasion of pancreatic cancer have been established[26,27].

In a series of 14 patients with AIP, EUS suspected invasion of the portal or mesenteric veins in 21% of patients compared to 14% on CT. No pancreatic cancer developed during the follow-up of these patients. Such EUS features, easily mistaken for malignancy, are due to the inflammatory process of AIP, which can involve medium and large-sized vessels (Figure 1)[15].

Peripancreatic fluid collections are less common and not specific for AIP.

In recent years, the possibility of guiding tissue sampling with either fine needle aspiration (EUS-FNA) (Figure 2) or Tru-cut biopsy (EUS-TCB) has increased the diagnostic potential of EUS by the acquisition of cytological and histological specimens from gastrointestinal lesions[28-30].

In the setting of AIP, EUS-FNA can be employed to yield specimens of pancreatic lesions, the common bile duct wall or lymph nodes[13,15]. Although a cytologic pattern specific for AIP has not been identified, high cellularity of stromal fragments with lymphoplasmacytic infiltrate has emerged as a discriminating feature in a retrospective series of 16 patients with an AIP diagnosis confirmed by histology of the respective specimens. Indeed, 56% of AIP patients presented such a feature vs 19% of patients with pancreatic carcinoma, and none of the chronic pancreatitis controls exhibited this feature[31]. Immunohistochemical staining can show IgG4-positive plasma cells which are a useful marker for the tissue diagnosis of AIP.

EUS-FNA can fail in diagnosis because of the small size of the specimens that do not have preserved tissue architecture. Moreover, sampling error due to the patchy distribution of AIP can occur. EUS-TCB can overcome these limitations by acquiring large samples fit for histological examination[30-32].

A recent study compared EUS-FNA and EUS-TCB performed in 14 patients for the diagnosis of AIP. EUS-TCB showed higher sensitivity (100%) and specificity (100%) compared to EUS-FNA (36% and 33%, respectively). Both procedures were found to be safe, with no complications[33].

However, the diagnostic accuracy of EUS-FNA for pancreatic cancer has been reported to range between 60% and 90%[34-36], and the shortcomings of EUS-TCB due to technical difficulties of the sampling of lesions in the pancreatic head should also be considered.

Hence, when AIP is suspected, a sequential sampling strategy has been proposed based on using EUS-FNA first, which is followed by EUS-TCB when cytologic examination is inconclusive[33].

In cases of inconclusive cytology, an additional aid for AIP diagnosis could come from molecular analysis of EUS-FNA samples, which has shown high accuracy in the differential diagnosis between AIP and pancreatic cancer[37].

AIP represents 20%-25% of benign diagnoses undergoing resection for presumed malignancy[38,39]. Thus, a definitive diagnosis based on safe and reliable methods should be obtained. In this setting, EUS could play an important role in diagnosis, identifying typical features of AIP and distinguishing it from biliopancreatic neoplasms. The higher sensitivity over standard imaging for pancreatic, biliary and nodal lesions should make it a cornerstone in the process of diagnosing AIP. If validated in large prospective series, newly available techniques such as EUS-elastography and CE-EUS could add useful information about focal lesions without resorting to invasive procedures. Finally, EUS-FNA or EUS-TCB can provide pathological specimens, as required by some diagnostic criteria.