Autoimmune pancreatitis (AIP) is now a well defined entity among the inflammatory diseases of the pancreas[1-3]. The number of studies in literature has constantly increased since the first one published in 1995 by Yoshida et al[4] (Figure 1). Despite the fact that in the first paper from Japan the disease was described as diffusely involving the pancreatic gland[5-8], later publications pointed out that the pancreas may also be focally involved by the autoimmune process[3,9-12]. Therefore, some authors have classified AIP as focal or diffuse[3]. Focal AIP is characterized by a segmental involvement of the parenchyma with the possibility of a low-density mass being present at imaging. 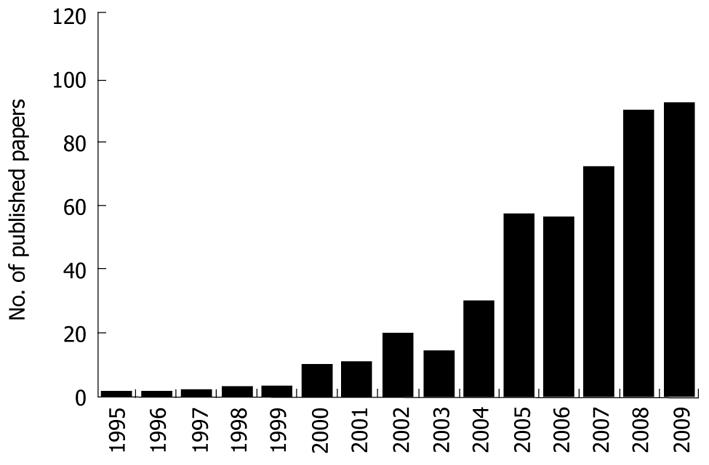 Clinically, the focal form, particularly in the presence of a low-density pancreatic mass, requires a more careful patient evaluation, since it may be easily confused with pancreatic cancer. Several series indicate that in 5%-21% of resected pancreatic masses suspected of being cancer, the final diagnosis excluded malignancy (Table 1)[13-20]. Since AIP responds dramatically to steroid treatment[1], a correct diagnosis of the disease is important to avoid surgery. On the other hand, in the presence of a resectable pancreatic mass, the probability of cancer is very high (> 90%). A misdiagnosis of AIP implies 2-3 week’s steroid treatment and a one month delay in surgery, with the consequent risk of not operating because of the progression of the malignancy with the onset of metastasis or of vascular involvement. A correct and quick diagnosis of AIP is therefore an important goal in clinical practice, particularly in focal AIP.

AIP diagnosis may be attained through well established diagnostic criteria. There is agreement on the use of four main criteria based on histological findings, radiological features, other organ involvement and clinical and instrumental response to steroid therapy. HISORt criteria introduced by Chari et al[21] in 2006 and based on surgical specimens of operated AIP patients can be considered standard criteria for the diagnosis of AIP. Serum IgG4[22-24] and positive IgG4+ plasma cells in pancreatic surgical specimens or pancreatic biopsies may also support the diagnosis of AIP[25-29].

There is agreement on the use of these diagnostic criteria (pathology, imaging, presence of other organ involvement, response to steroids), but not on the strategy to be followed in making the diagnosis.

THE STRATEGIES IN THE DIAGNOSIS OF AIP

Three main strategies, from Japan, the USA and Italy, have been suggested. The clinical approach to the disease by these strategies is different.

In the USA distinguishing the different pathological subtypes of AIP[21,30,31] is considered prominent for the diagnosis. In the USA and in Europe, AIP may be classified as type 1 (or Lympho-Plasmacytic Sclerosing Pancreatitis-LPSP) and type 2 (or Idiopathic Duct-centric Chronic Pancreatitis- IDCP)[31-34]. Since the clinical evolution of these forms seems to be different, some authors have suggested obtaining the diagnosis of AIP subtypes from EUS-guided biopsy[31,35].

The main pathological and serological features in type 1 AIP are[31,36]: (1) Prevalence of storiform fibrosis, with obstructive phlebitis; (2) high levels of serum IgG4; (3) presence of IgG4+ plasma cells in the involved pancreatic tissue; and (4) absence of granulocytic epithelial lesions (GEL), that are the expression of an aggression against epithelial ductal cells, with rupture and destruction of ductal structures. The pathological characteristics in type 2 AIP are on the contrary[31,36]: (1) prevalence of inflammation; (2) presence of GEL; and (3) absence of serum IgG4 and of IgG4+ plasmavcells in the inflamed pancreatic tissue.

The clinical aspects and the evolution are different in type 1 and 2 AIP[31,36,37]. In type 1 AIP (LPSP), there is a prevalence of males, patients are older, other organs may be involved (more commonly salivary glands, biliary tract, kidney, lung, retroperitoneum) and the relapse of the disease is more frequent after steroid treatment. In type 2 (IDCP), male/female ratio is about 1, patients are younger, the colon only may be involved (ulcerative colitis) and relapse after steroids is infrequent. Both forms respond quickly to steroid treatment[31,36-38].

The diagnostic approach is therefore aimed at diagnosing AIP subtypes, mainly through pancreatic core biopsy, and this appears to have a good sensitivity and specificity[28,29,39].

In Japan, only type 1 AIP (LPSP) is considered an autoimmune disorder and an IgG4-mediated systemic disorder associated with pancreatic lesions[40]. Only in a few cases has type 2 AIP (IDCP) been described in Japan and it is not considered an autoimmune disease, despite its quick response to steroids just as type 1 AIP. Instrumentally, in the majority of cases the disease diffusely involves the pancreas. Several diagnostic algorithms have been suggested in Japan and Korea[8,41-44]. A comprehensive diagnosis should be based on pancreatic imaging (including ERCP), serological tests (IgG4, total IgG, non organ specific autoantibodies, antibodies to carbonic anhydrase type I and II, antibodies to lactoferrin) and pathological findings. The presence of extrapancreatic lesions may suggest the possibility of AIP.

THE ITALIAN STRATEGY: A CLINICAL APPROACH TO THE DISEASE

The Italian proposal for the diagnosis of AIP, which is different from that suggested in Japan and the USA, is based on the instrumental distinction between focal and diffuse forms of the disease[2,3].

A wide range of symptoms are reported by patients at the clinical onset of the disease. Jaundice, abdominal pain, usually mild, symptoms secondary to pancreatic exocrine and endocrine insufficiency (weight loss, diabetes), and persistent elevation of serum levels of pancreatic enzymes may be observed in AIP patients. In a few cases AIP is discovered incidentally by US or other imaging techniques performed without an indication for a pancreatic disorder.

On the basis of imaging, these patients can be divided in those with focal involvement of the pancreas and those with diffuse enlargement of the pancreatic gland[12]. In the case of focal AIP, particularly in the presence of a low-density pancreatic mass, the clinical challenge is to exclude pancreatic cancer and correctly diagnose AIP. Therefore, focal and diffuse types AIP should be strictly separated, since the problem of differential diagnosis with pancreatic cancer involves only focal AIP.

In the diffuse form associated with jaundice secondary to a common bile duct stricture, a diagnosis of cholangiocarcinoma should be considered and, if necessary, ruled out before steroid therapy through ERCP with biliary biopsies and/or intraductal biliary ultrasonography.

In the focal form, particularly in the presence of a low-density pancreatic mass at imaging, the first diagnostic goal is to exclude pancreatic cancer, even if the presence of clinical (young age, other organ involvement), radiological (perfusion of the pancreatic mass suggestive of inflammation, no or mild dilation of the main pancreatic duct) and serological (high level of IgG4, presence of autoantibodies, low serum levels of Ca 19-9) findings are suggestive of AIP. Therefore, pancreatic biopsy is mandatory, preferably EUS-guided, first of all to exclude neoplasia and possibly to confirm the diagnosis of AIP.

If pancreatic biopsy confirms the diagnosis of AIP, a 3 wk steroid treatment is indicated. The diagnosis of AIP is final in the presence of a significant clinical and radiological response. Since significant improvement/resolution of jaundice is an indication of response to steroid therapy, biliary stenting is not recommended, unless serum bilirubin levels are very high.

If pancreatic biopsy is only suggestive of AIP or non diagnostic, a careful evaluation of HISORt criteria is necessary to decide whether the patient should be treated with steroids or undergo resective surgery. The decision is actually a challenge and should be made in experienced centres only, because it requires expert clinicians, radiologists, pathologists and surgeons. After a complete or significant response to steroid therapy, a definitive diagnosis of AIP may be made.

The diagnosis of AIP still remains difficult. The diagnostic algorithm is different in the diffuse and focal forms of the disease, particularly in the presence of a low-density pancreatic mass at imaging. Biopsy or fine needle aspiration cytology is mandatory in the presence of a low-density pancreatic mass. In some cases, only a full or significant response to steroids allows a final diagnosis of AIP to be made. Agreement among experienced clinicians, radiologists, pathologists and surgeons is needed to adopt the response to steroid therapy as a diagnostic criterion in patients where the diagnosis cannot be made through pancreatic biopsy.