Lymphangioma of the colon is a relatively rare non-epithelial tumor and usually presents as a submucosal polypoid lesion. Many cases incidentally discovered are usually asymptomatic. However, they may present as abdominal pain or bleeding, and their resection is normally required. Lymphangioma itself is generally recognized as a benign tumor and no cases of malignant transformation have yet been reported, although its natural history is currently unknown. To the best of our knowledge, this study is the first to describe a case of spontaneous resolution in multiple colonic lymphangiomas without any specific treatment.

Lymphangioma is a benign tumor commonly found in children. The majority of lymphangiomas are considered to be lymph vessel anomalies. The condition involves several expanded lymphatics surrounded by benign endothelial cells and usually occurs in the head, neck and axillary regions, and rarely in the gastrointestinal tract[1-3]. Recently, the number of case reports has been increasing with the increased use of endoscopic colon examination. Many lymphangiomas are asymptomatic and require no treatment, because the condition is considered absolutely benign. No cases, in which lymphangioma underwent malignant transformation, have been reported. However, some cases of lymphangioma accompany colon cancer[2]. When symptoms such as bleeding, intussusceptions or protein losing enteropathy are present, resection of lymphangioma is necessary[4-7]. Thus far, the natural history of colonic lymphangioma has remained unknown. Herein, we report the first case of spontaneous resolution of multiple colonic lymphangiomas during the follow-up.

A 54-year-old male patient suffered intermittently from blood-tinged stool with no personal or familial history of any specific disease. Physical examination showed no remarkable abdominal abnormality. Laboratory test or chest and abdominal radiography displayed no specific findings. Initial colonoscopy revealed numerous elevated lesions with smooth surfaces throughout the entire colon, which evidenced morphological changes as shown by endoscopy. In particular, the lesions on the left side of the colon evidenced surface petechiae (Figure 1). A diagnostic procedure and endoscopic mucosal resection were performed for the appropriate diagnosis and treatment of the lesions. Histopathological examination showed that the cystic lesion was lined with cuboid-shaped cells that were positive for CD68 histiocytic markers (Figure 2) but negative for CD34 and CK on immunohistochemical examination, the patient was thus diagnosed with colonic lymphangioma. Abdominal computed tomography showed no definite abnormalities, and the possibility of secondary events was excluded. The complaint of mild symptoms led to medical observation and use of stool softener. 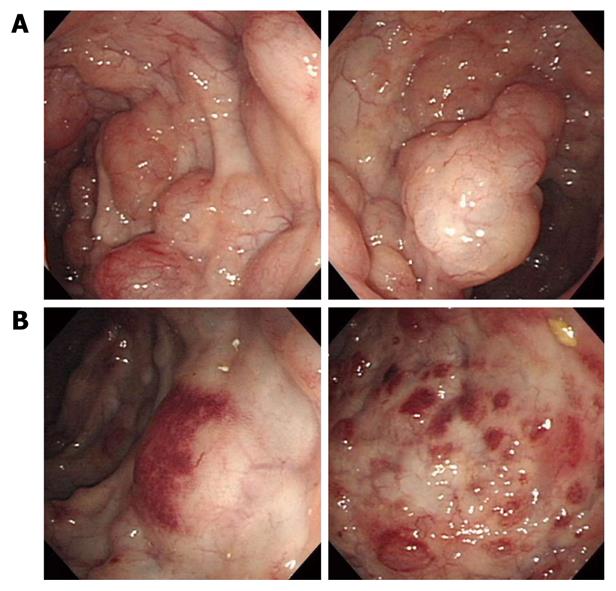 Figure 1 Initial colonoscopy showing multiple elevated or protruding lesions with semi-transparant and smooth surfaces (A), and petechiae on the surfaces of lesions in the sigmoid colon (B). 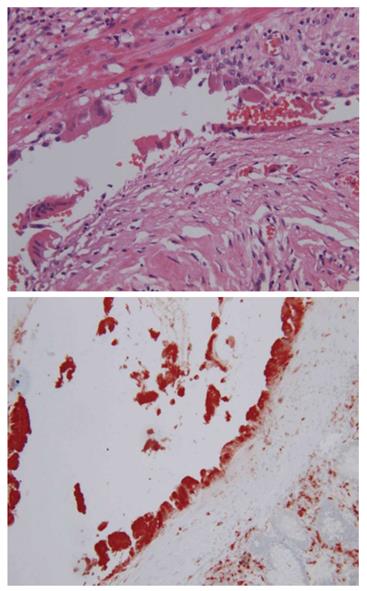 After 12 mo, the patient visited our department for colonoscopy, which showed no more remarkable changes than the previous findings. Biopsy procedure was repeated, which demonstrated that the cystic lesion had no lining endothelium but was lined with focal multinucleated giant cells in the submucosa (Figure 3). After 24 mo, colonoscopy revealed complete resolution of colonic lymphangiomas without any specific treatment (Figure 4). 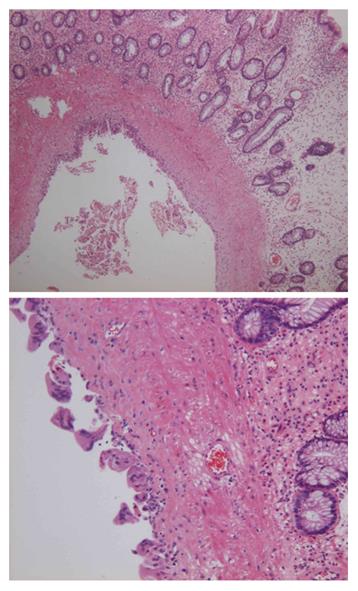 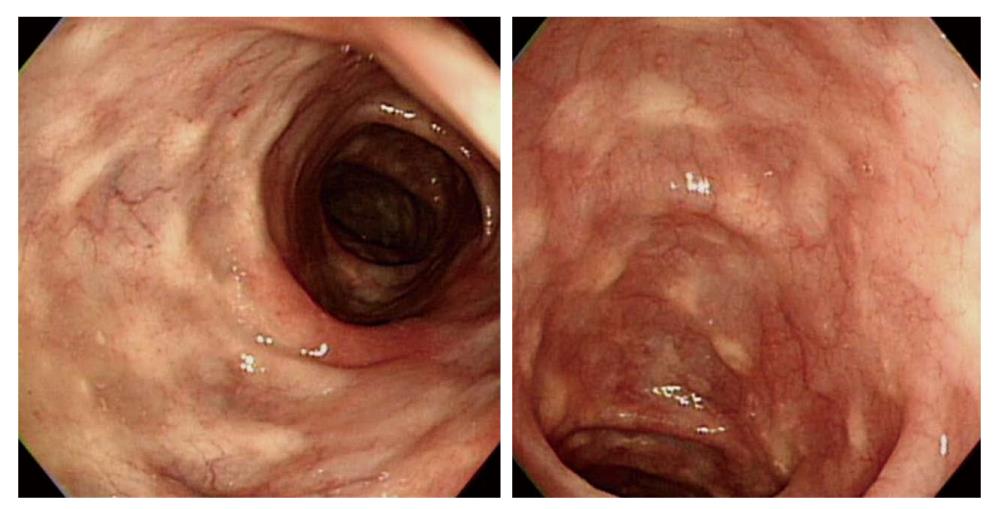 In most reported cases of colonic lymphangioma, the condition is solitary. Only a few cases of multiple lymphangiomas of the colon, the so-called “colonic lymphangiomatosis”, have been reported so far[8,9]. Endoscopic findings of colonic lymphangioma are characterized by the presence of submucosal tumor properties covered with normal mucosa, round and soft surfaces, a wide base area, pink color and semi-transparency. Histological observations of lymph vascular dilation and outgrowth in the submucosal layer are important for its correct diagnosis in these cases. The condition is classified into capillary, cavernous, and cystic types[10]. The cystic type, as in our case, is also the most frequently reported and characterized by dilated lymphatic vessels surrounded by flat endothelial cells between fat, fibrotic and lymphatic structures. To the best of our knowledge, the formation of lymphangioma impedes lymph flow for a prolonged period, resulting in lymph vessel expansion or further progression and is generally perceived as a developmental malformation or agenesis of lymphatic tissue. Other causes such as abdominal trauma, lymphatic obstruction, inflammatory processes, cancer, surgery, or radiation may result in secondary lymphagioma formation[11-16]. In the case of lymphangioma appearing late in adulthood, the lesion may have developed secondarily from a local disturbance of the lymphatic circulation[2]. Therefore, the clinicians should look out for the causative condition, particularly in adults. Abdomen computed tomography showed no co-morbid disease in our case.

Although a definitive diagnosis of colonic lymphangioma requires complete excision including the submucosal layer, unnecessary surgery should be avoided. Moreover, as in our case, it is quite difficult to perform a total colectomy to remove lesions involving the entire colon. The spontaneous resolution of cystic hygromas originating in the neck or mediastinum has been reported[14,15]. Several investigators have suggested that increased pressure in the lymphatic system may overcome incomplete obstructions, which may explain why the lesions are spontaneously resolved. In contrast, spontaneous resolution presumably results from the establishment of alternative routes of lymphatic drainage in cases of septated lesions[16-18]. Although this hypothesis has been applied to cystic hygroma of the neck or the spleen, it may match well in our case. The mild leakage induced by increased pressure of the cyst may stimulate dendritic cells or macrophages in the stroma. In a prolonged state of lymphatic stagnation, CD68-positive cells, which can be dendritic cells or macrophages, might correspond to the cells equipped with phagosomes and lysosomes[19]. These stimulated cells would evidence phagocytic activity on the lining cells, which continues until the lymphangioma is resolved.

In conclusion, conservative management coupled with close surveillance may be an effective treatment strategy for lymphangioma, and resection of lymphangioma should be reserved in mild symptomatic or asymptomatic patients, because of its benign nature and possible spontaneous resolution.