Recent advances in endoscopic imaging techniques have revolutionized the diagnostic approach of patients with inflammatory bowel disease (IBD). New, emerging endoscopic imaging techniques visualized a plethora of new mucosal details even at the cellular and subcellular level. This review offers an overview about new endoscopic techniques, including chromoendoscopy, magnification endoscopy, spectroscopy, confocal laser endomicroscopy and endocytoscopy in the face of IBD.

Patients with long standing ulcerative colitis and Crohn’s disease are at an increased risk for the development of intraepithelial neoplasia (formerly known as dysplasia) and colorectal neoplasia. Therefore, surveillance endoscopy is mandatory in these patients. Nevertheless, standard white light endoscopy with multiple random biopsies may miss a quantum of lesions[1]. 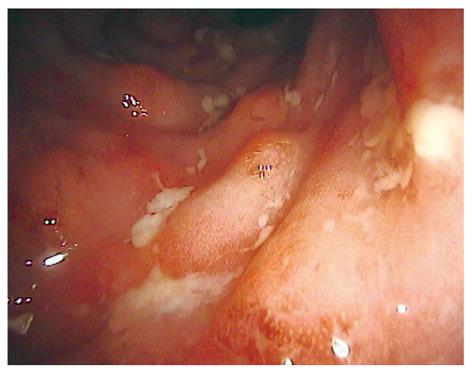 This review describes the concept of advanced endoscopic imaging techniques in IBD.

The basic principle of dye-based chromoendoscopy (DBC) is the use of biocompatible dye agents (Figure 2). Dyes include absorptive (methylene blue 0.1%-0.5%, cresyl violet 0.2%) and contrast agents (indigo carmine 0.2%-0.4%). DBC yields an additional diagnostic value with a 3-4 higher detection rate of intraepithelial neoplasia[2,3]. However, dye-based chromoendoscopy has some potential limitations. There are additional costs for the equipment needed for dye spraying, it is a time consuming procedure, the dye does not always coat the surface evenly and it does not allow for a detailed analysis of the subepithelial capillary network, which is an important feature in the early diagnosis of gastrointestinal neoplasia. 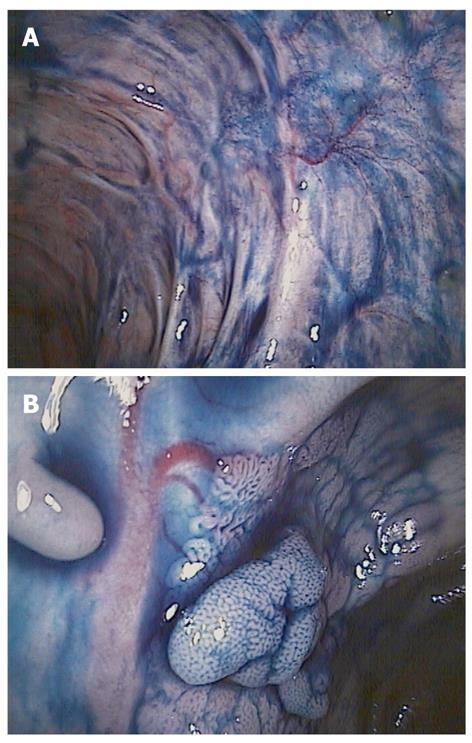 Figure 2 Chromoendoscopy with indigo carmine. A better distinction of mucosal changes in long standing ulcerative colitis (A) and pit pattern analysis of suspicious lesions (B).

NBI is based on optical filters within the light source of the endoscope which narrow the bandwidth of spectral transmittance such that the blood vessels are enhanced and thus seen more easily.

FICE and i-Scan are based on the same physical principle as NBI, but due to a computed spectral estimation technology, they are not dependent on the presence of optical filters inside of the video endoscope. In contrast to NBI, FICE and i-Scan use an endoscopic image from the video processor and reconstruct virtual images in real time by increasing the intensity of narrowed blue light to a maximum and by decreasing narrowed red light and green light to a minimum resulting in an improved contrast of the capillary patterns and enhancement of the mucosal surface.

Very recently, it was shown that FICE could not improve the detection or delineation of ulcers and erosions due to Crohn’s disease[7]. Nevertheless, these preliminary data have to be proven in larger prospective trials.

Magnification endoscopy (also called zoom endoscopy) utilizes a movable lens to vary the degree of magnification up to 150-fold (Figure 4). By staining the entire colon with methylene blue, it has been shown that chromoendoscopy combined with magnification endoscopy has the potential to improve targeting biopsy examination in patients with long-standing colitis and facilitate early detection of intraepithelial neoplasia and colorectal cancer[2]. In the chromoendoscopy arm a significantly better correlation was found between the endoscopic assessment of degree (P = 0.0002) and extent (P < 0.0001) of colonic inflammation and the histopathologic findings compared with the conventional colonoscopy group. Additionally, more targeted biopsies were possible, and significantly more intraepithelial neoplasia were detected in the chromoendoscopy group (P = 0.003).

These data were confirmed by Hurlstone and colleagues[3]. In a prospective study, 162 patients with long-standing ulcerative colitis underwent total colonoscopy. After detection of subtle mucosal changes intravital staining with indigo carmine was used. Subsequently, the macroscopic type and the staining pattern were defined. Chromoendoscopy with magnification and targeted biopsies significantly increased diagnostic yield for intraepithelial neoplasia and the number of flat neoplastic changes as opposed to conventional colonoscopy.

Spectroscopy includes several optical techniques, including fluorescence-, reflectance-, light scattering spectroscopy and optical coherence tomography. Spectroscopy depends on the wavelength of the light source and on tissue characteristics. Based on differences between the spectra of light that is backscattered between cells, different spectra can be identified that are specific for various diseases such as ischemia, inflammation, and malignancy[10].

One study assessed fluorescence endoscopy for the detection of intraepithelial neoplasia in ulcerative colitis by taking optical guided biopsies. By using 5-aminolevulinic acid as an exogenous fluorophore agent, sensitivity and specificity for dysplastic lesions was 100% and 62%, respectively[11]. Very recently, the detection of invisible flat intraepithelial neoplasia with protoporphyrin IX fluorescence was compared to standard 4-quadrant biopsies[12]. Flat intraepithelial neoplasia was detected in 7% of patients by standard white light 4-quadrant biopsies and in 24% of patients using fluorescence-guided endoscopy (P = 0.02). Sensitivity and specificity for differentiating patients with and without dysplasia were 100% and 81%, respectively. Additionally, dysplastic and non-dysplastic mucosa could be discriminated with a sensitivity and specificity of 73% and 81%, respectively.

In 2004, confocal laser endomicroscopy was introduced, allowing real time in vivo histology of 1000-fold magnification during ongoing endoscopy[13]. Currently, two FDA approved devices are available (Figure 5). One is integrated into the distal tip of a high resolution endoscope (iCLE; Pentax, Tokyo, Japan), one represents a stand-alone probe which is capable of passage through the working channel of most standard endoscopes (pCLE; Cellvizio, Mauna Kea Technologies, Paris, France). A blue laser light source delivers an excitation wavelength of 488 nm and returning light is detected at > 505 nm. Endomicroscopy requires the application of fluorescence agents, either systemically (fluorescein) or topically (e.g. acriflavine, cresyl violet)[14].

While endomicroscopy only covers a limited field of view within the mucosa, pan-endomicroscopy of the whole gastrointestinal tract is not feasible. Therefore, macroscopic visualization of suspected areas is necessary before performing targeted endomicroscopy.

To date, different studies have addressed the utility of endomicroscopy for the in vivo diagnosis of IBD associated mucosal changes.

Recently, a new classification of inflammation activity in ulcerative colitis using endomicroscopy was proposed[16], including crypt architecture and microvascular alterations. In this study, endomicroscopy was reliable for real-time assessment of inflammation activity in ulcerative colitis showing good correlations with histological results (Spearman’s rho, both P < 0.001).

Current guidelines recommend a large number of biopsy specimens during surveillance colonoscopy in ulcerative colitis. Nevertheless, flat lesions still may be missed. In a trial of longstanding ulcerative colitis, chromoendoscopy was used to unmask lesions for endomicroscopy and compared with standard white light endoscopy with random biopsies[17]. Chromoendoscopy in combination with endomicroscopy detected 4.75-fold more neoplasia compared to conventional colonoscopy (P = 0.005). Additionally, 50% fewer biopsy specimens were required (P = 0.008). The presence of neoplastic changes could be predicted with high sensitivity, specificity and accuracy (94.7%, 98.3%, 97.8%, respectively).

One recent study prospectively evaluated the clinical applicability and predictive power of endomicroscopy for the in vivo differentiation of dysplasia-associated lesional mass (DALM) or adenoma-like mass (ALM)[18]. Accuracy of endomicroscopy was 97% and an excellent agreement between endomicroscopy and histopathological diagnosis was found (κ = 0.91).

Endocytoscopy (Olympus, Tokyo, Japan) is a new imaging technique, enabling microscopic imaging of the mucosal layer of the gut at a magnification up to 1400-fold (Figure 6). Endocytoscopy is based on a contact light microscope which enables real-time visualization of cellular structures of the superficial epithelial layer in a plane parallel to the mucosal surface. Currently, systems integrated into the distal tip of an endoscope (iEC) and probe-based (pEC) systems are available. Probe-based systems consist of handheld miniprobes, which are capable being inserted through the accessory channel of a standard endoscope. The device provides ultra high magnification imaging at × 570 (pEC), × 580 (iEC) or × 1400 (pEC) on a 19-inch monitor from an optical sampling site of about 0.5 mm in diameter. Endocytoscopy requires preparation of the mucosal layer with absorptive contrast agents like methylene blue or toluidine blue[19].

Recently, endocytoscopy has been established as a useful tool to examine mucosal surfaces[20-23]. Different studies suggest the potential of endocytoscopy for the in vivo evaluation of duodenal mucosa in celiac disease[21]. Furthermore, endocytoscopy was able to detect tissue abnormalities in normal mucosa surrounding colorectal cancer and to identify neoplasia in aberrant crypt foci[22]. Additionally, endocytoscopy was shown to distinguish neoplastic from non-neoplastic lesions, and also to differentiate invasive colon cancer from adenoma[23,24].

Currently, data on endocytoscopy for in vivo diagnosis of IBD are still lacking. Nevertheless, this new imaging technique is a promising development allowing surface magnification at cellular and subcellular resolution.

In order to evaluate the small intestine capsule endoscopy (CE) was introduced. Currently two CE systems are available. One is distributed by Given Imaging (Norcroscc, Ga), and one by Olympus (Tokyo, Japan). The capsule is passively propelled through the intestine by peristalsis while transmitting color images of the intestine[25].

CE is useful for the evaluation of the small intestine in patients in whom the diagnosis of Crohn’s disease is elusive[26]. Due to the danger of capsule retention in patients with established Crohn’s disease, a patency capsule is available which is self-dissolved approximately 30 h after ingestion. In addition, balloon-guided endoscopy could be used to remove impacted capsules[27]. Dubcenco and coworkers studied CE findings in patients with established and suspected small-intestine Crohn’s disease and correlated the findings with radiologic, endoscopic and histologic findings. Final diagnosis of active small-intestine Crohn’s disease was made in 74% of patients. In addition, CE yielded a sensitivity and specificity of 89.6% and 100%, respectively, and a positive predictive value and a negative predictive value of 100% and 76.9%, respectively[28]. Furthermore, CE was shown to be superior compared to push enteroscopy and enteroclysis[29].

Modern endoscopy has revolutionized the diagnosis and management of patients with IBD. The newly developed endoscopic devices offer features that allow more and more mucosal and submucosal details to be seen. According to high magnification and respective reduced field of view, prior assessment of suspicious lesions is mandatory. Chromoendoscopy, using either vital or virtual staining techniques unmasks circumscript lesions and confocal laser endomicroscopy or endocytoscopy can then be used to predict intraepithelial neoplasia with high accuracy. Nevertheless, the assessment of these new endoscopic imaging modalities in clinical practice still warrants further investigation. In addition, currently there is no reimbursement for advanced endoscopic imaging methods including endomicroscopy, endocytoscopy and spectroscopy. Therefore, endoscopy with multiple random biopsies remains the gold standard for surveillance in patients with IBD.