The reverse cholesterol transport pathway (RCT) is the focus of many cholesterol-lowering therapies. By way of this pathway, excess cholesterol is collected from peripheral tissues and delivered back to the liver and gastrointestinal tract for excretion from the body. For a long time this removal via the hepatobiliary secretion was considered to be the sole route involved in the RCT. However, observations from early studies in animals and humans already pointed towards the possibility of another route. In the last few years it has become evident that a non-biliary cholesterol secretion pathway exists in which the intestine plays a central role. This transintestinal cholesterol efflux (TICE) pathway contributes significantly to the total fecal neutral sterol excretion. Moreover, recent studies have shown that TICE is also sensitive to stimulation. As a consequence, the direct role of cholesterol secretion from blood via TICE makes the intestine a suitable and approachable target for cholesterol removal from the body and possibly reduction of atherosclerosis. In this review, the discovery and recent findings contributing to understanding the mechanism of TICE will be discussed.

Since the introduction of statins about 25 years ago, therapeutic lowering of cholesterol levels has been proven successful in decreasing the incidence of cardiovascular diseases (CVDs)[1]. In fact, the reduction of low density lipoprotein (LDL) cholesterol levels in blood by the inhibition of cholesterol biosynthesis using these 3-hydroxy-3-methyl-glutaryl-CoA (HMG-CoA) reductase inhibitors is still the most potent cholesterol-lowering therapy to date[2]. However, while the reduction of LDL cholesterol levels in blood helps to prevent the development of atherosclerosis, the underlying process of CVD, it does not seem to be sufficient enough for the reversal of already existing atherosclerotic lesions[3,4]. With better understanding of cholesterol metabolism, new ideas for therapies to prevent CVD have emerged. One of the most prominent attempts in the last decade is stimulating reverse cholesterol transport (RCT)[5-7]. RCT describes the different stages of cholesterol transport, from efflux from peripheral tissues to fecal excretion[8]. Passage through liver and bile before subsequent entry into the intestinal lumen has long been considered to be the most important, if not the only, route in RCT. However recent findings have shown the existence of a cholesterol secretion pathway that is independent of this hepatobiliary tract[9,10].

REMOVAL OF CHOLESTEROL VIA ITS REVERSE TRANSPORT

Since the introduction of the term RCT in the early 1970s, our knowledge of this cholesterol removal pathway has advanced to a great extent[8]. In brief, the pathway starts with the efflux of cholesterol from peripheral cells, including from macrophages in the arterial wall, by cholesterol transporters adenosine triphosphate-binding cassette transporter protein (ABC) A1 and G1 (Figure 1)[6,7]. This cholesterol is transported via lipoproteins to the liver where it can be taken up by hepatocytes via specific lipoprotein receptors. The lipoprotein that mediates this transport is the high density lipoprotein (HDL). However, recent findings in transgenic mice also include a role for LDL via the activity of cholesteryl ester transfer protein[11]. After uptake at the basolateral side, the cholesterol can be transferred to the bile via secretion at the canalicular membrane of the hepatocyte. The cholesterol transport over the canalicular membrane is mainly facilitated by a heterodimer complex formed by ABCG5 and ABCG8[12]. Biliary cholesterol enters the intestinal lumen, from where a significant amount is re-absorbed by the enterocytes[13]. The remaining cholesterol leaves the body via fecal excretion. 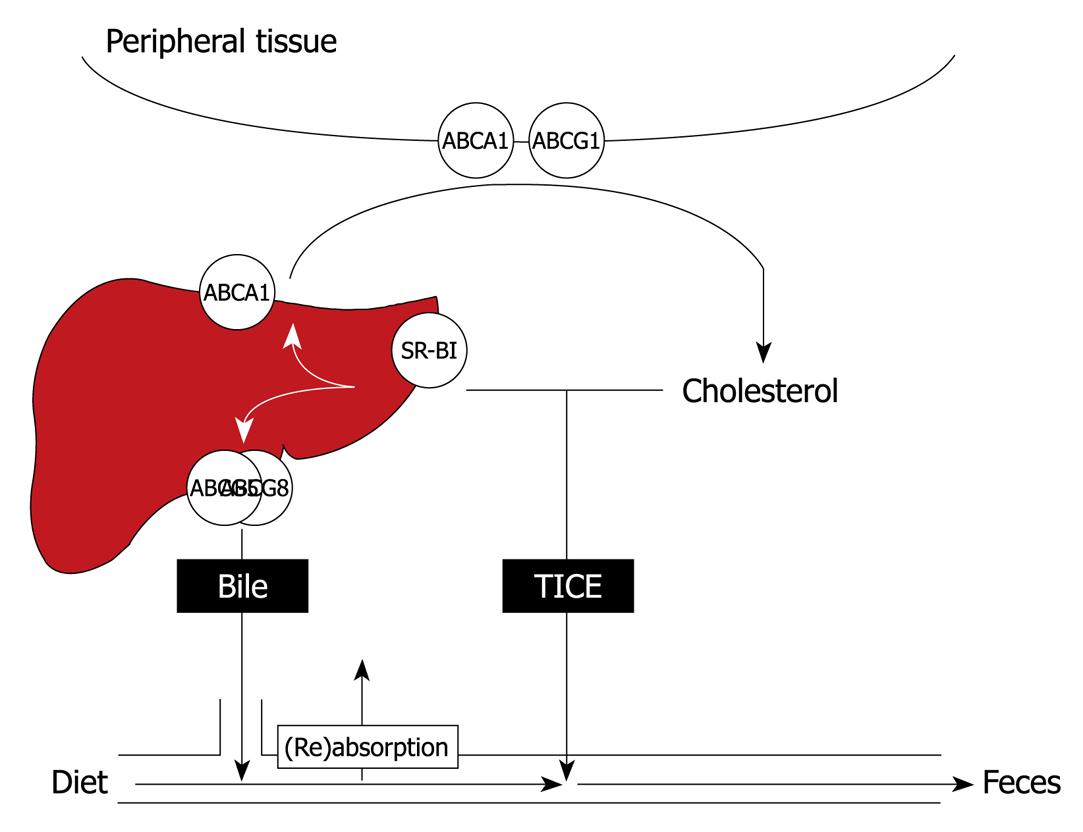 If the fecal sterol output only depends on the hepatobiliary cholesterol transport, it should directly be affected by diminished biliary cholesterol secretion. Hence, fecal sterol excretion should be attenuated in mice lacking a functional ABCG5/ABCG8 or deficient for phospholipid transporter ABCG4. Interestingly, despite the very low to absent biliary cholesterol secretion in these mice their sterol output is similar to that of their wild type littermates[9,12,14]. The idea that the fecal sterol excretion might to a certain extent be independent of biliary cholesterol secretion is not confined to recent observations. Earlier findings going as far back as the beginning of the last century already suggested the existence of an additional source for cholesterol excretion. In 1927, Sperry[15] reported that he had measured more excreted cholesterol in the feces of dogs with bile fistula than he would have predicted based on the results obtained from control dogs; an observation which was confirmed 50 years later by Pertsemlidis et al[16]. It was also observed in rats that a large part of the cholesterol that ends up in the feces seems to originate from a source other than bile and diet[17,18].

While the intestine perfusions in mice showed for the first time the existence of TICE, a recent study by Brown et al[10] also unmistakingly showed the presence of a non-biliary route for cholesterol excretion. In their report, mice deficient for hepatic acyl-CoA: cholesterol O-acyltransferase 2 (ACAT2) had an increased fecal excretion of cholesterol without a changed biliary cholesterol secretion. Additionally, they also found intestinal cholesterol secretion to be the highest in the proximal small intestine.

With the evidence that the small intestine is not only involved in the uptake of cholesterol but also has the ability to actively secrete cholesterol, a new potentially attractive target for therapeutic lowering of cholesterol has emerged. However, more understanding of the mechanism of TICE is required.

IN VIVO STIMULATION OF THE TRANSINTESTINAL CHOLESTEROL EFFLUX PATHWAY

Several studies in mice have demonstrated that the activity of TICE can be stimulated. One of our earliest studies on TICE involved the sensitivity of this novel pathway to dietary manipulations. When mice are fed a high lipid diet, fecal neutral sterol excretion is increased[20-22]. Besides the higher input of cholesterol, this increase upon feeding with diets containing high cholesterol can be explained by reduced intestinal uptake of cholesterol and increased biliary cholesterol secretion. However, the increased fecal neutral sterol excretion seen in mice fed a high fat diet without cholesterol did not correlate with increased biliary cholesterol secretion. We studied the effect of high lipid diets on TICE and found that the secretion of cholesterol by the intestine is also increased in mice fed a western-type diet, containing high cholesterol and high fat[9]. Interestingly, a high cholesterol-only diet did not affect TICE suggesting that this secretion pathway is responsive to the fat content of the western-type diet[21]. This was confirmed in mice that were fed a high-fat diet without cholesterol. We also showed that activation of the peroxisome proliferator-activated receptor δ (PPARδ) caused an over two-fold increase in TICE[23]. This finding strengthened the link between TICE and fat metabolism since polyunsaturated fatty acids are natural ligands of this member of the nuclear receptor family[24].

Another nuclear receptor that is involved in the regulation of lipid-related metabolic processes, the liver X receptor (LXR), affects TICE as well[19,25]. In mice, activation of LXR increased fecal neutral sterol loss independent of biliary cholesterol secretion. However, the stimulation of TICE upon a high fat diet in LXRα knock-out mice suggests that LXR sensitivity of TICE occurs via a different pathway[22].

The effect of luminal modifications on TICE was investigated by means of introducing different combinations of bile salt-phospholipid[21]. Although the intraluminal presence of bile salts was crucial for TICE, an important finding was that, in contrast to biliary cholesterol secretion, TICE seemed to be insensitive to both the type of bile salt and bile salt concentration. The presence of intraluminal phospholipids was not essential for TICE. However, the addition of phospholipids did have a stimulatory effect on TICE.

To gain better insight into this RCT pathway and identify key players in the intestine, the ability to stimulate the rate of TICE may be a helpful tool (Figure 2). Unfortunately, expression analysis of cholesterol-related genes in the small intestine from mice fed with a high-fat diet or treated with PPARδ agonist did not reveal many usual suspects[21,22]. The gene expression of the key factor in cholesterol synthesis, i.e. 3-hydroxy-3-methyl-glutaryl-CoA reductase (Hmgcr), was unaffected and the expression of most genes encoding cholesterol transporters was either unchanged or even decreased. One transporter that was upregulated in the small intestine of mice that received a high-fat diet was the scavenger receptor class B type I (SR-BI). Although it can mediate uptake from both LDL and HDL, SR-BI is mostly involved in the cellular cholesterol uptake from circulating HDL[26,27]. Considering their well accepted role in RCT via the hepatobiliary route, a comparable role for both SR-BI and HDL in TICE is plausible. However, a direct involvement of SR-BI has become debatable since TICE was also increased in mice deficient for SR-BI[21]. Also, Sr-b1-/- mice are characterized by elevated HDL-levels[28], but a possible relationship between the physiologic concentration of HDL and the rate of TICE is questionable. In Abca1-/- mice, which are characterized by low HDL levels and unaltered biliary cholesterol secretion, no decrease in fecal neutral sterol excretion has been observed[29]. In addition, Briand et al[30] demonstrated in wild type mice that uptake of HDL by the intestine is significantly lower than the hepatic uptake. Taken together, these data dispute the direct involvement of the major players in the hepatobiliary route. How, and by which cholesterol donor, the cholesterol is transported to the intestine for TICE remains to be elucidated. However, the link that has been established between TICE and deficiency in hepatic cholesterol esterification due to liver-specific depletion of ACAT2 might help to shed some light on this part of the non-hepatobiliary cholesterol secretion route[10]. 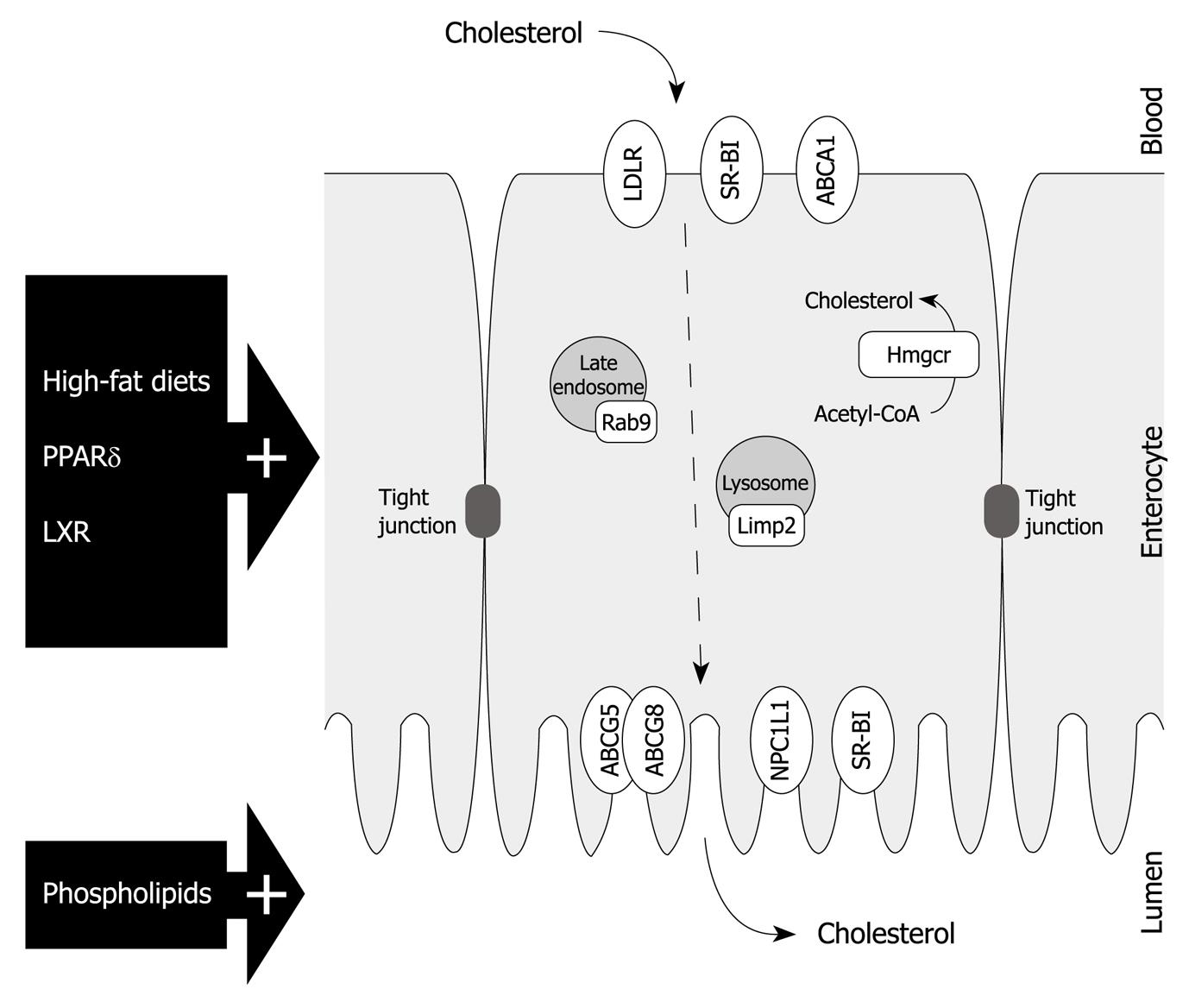 One important cholesterol transporter that was affected in both high-fat diet-fed and PPARδ agonist-treated mice, was the Niemann-Pick C1-like 1 protein (NPC1L1)[21,23]. Earlier reports could only partially explain the increased fecal neutral sterol output by the reduced cholesterol absorption caused by the attenuated expression of NPC1L1[22,31]. Despite the strong increase in fecal neutral sterol excretion in mice upon treatment with ezetimibe, the inhibitor of NPC1L1, we have shown that NPC1L1 plays no role in TICE[23].

Interestingly, gene expression analysis in the intestine of mice with an increased TICE did reveal two genes encoding proteins that have been associated with the intracellular transport of cholesterol[23]. Rab9 plays a role in cholesterol trafficking from late endosomes to the trans-Golgi network and it has been shown that overexpression of Rab9 can relieve cholesterol build up in Niemann-Pick type C cells, which is a manifestation of a lipid storage disorder[32,33].

The lysosomal integral membrane protein 2 (Limp2) is a lysosomal membrane protein that is known to bind to β-glucocerebrosidase and has specific functions in intracellular vesicular trafficking[34]. However, Limp2 is also the mouse ortholog of the human scavenger receptor class B type 2 (Scarb2) which has been shown to influence cholesterol homeostasis[35]. What the exact relationship between these two factors and TICE might be requires further studies.

Finally, a role for the heterodimer ABCG5/G8 in TICE cannot be ruled out. Despite being a likely candidate for mediating cholesterol secretion into the intestinal lumen in TICE, initial studies in mice lacking functional ABCG5/G8, as mentioned above, only helped in pointing out the existence of TICE. Since TICE was not reduced in Abcg8-/- mice, a possible function for ABCG5/G8 in TICE was questionable[9]. However, a more recent study from van der Veen et al[19] demonstrated that increase in TICE upon LXR agonist treatment was ABCG5/G8-dependent.

We are still challenged by a better understanding of the mechanistic details of this novel RCT pathway, but it is clear that TICE presents us with a therapeutic potential in the treatment of atherosclerosis. The direct role of the intestine in the reverse transport of cholesterol from “blood to gut” makes it a suitable and approachable target for cholesterol removal from the body and prevention of cardiovascular diseases.