AIM: To study the value of neoadjuvant chemotherapy (NAC) for advanced gastric cancer by performing a meta-analysis of the published studies.

METHODS: All published controlled trials of NAC for advanced gastric cancer vs no therapy before surgery were searched. Studies that included patients with metastases at enrollment were excluded. Databases included Cochrane Library of Clinical Comparative Trials, MEDLINE, Embase, and American Society of Clinical Oncology meeting abstracts from 1978 to 2010. The censor date was up to April 2010. Primary outcome was the odds ratio (OR) for improving overall survival rate of patients with advanced gastric cancer. Secondary outcome was the OR for down-staging tumor and increasing R0 resection in patients with advanced gastric cancer. Safety analyses were also performed. All calculations and statistical tests were performed using RevMan 5.0 software.

CONCLUSION: NAC can improve tumor stage and survival rate of patients with advanced gastric cancer with a rather good safety.

The effect of NAC on gastric cancer has been studied in several prospective trials[11-14]. However, no definite conclusion has been drawn from these trials. The underlying reasons included insufficient statistical power due to a limited sample size, an extended period of time for patient accrual, imbalanced treatment arms, and non-protocol treatment strategy. A well-designed randomized clinical trial is therefore needed to define the effect of NAC on advanced gastric cancer. A relatively effective alternative to provide clinical evidence under such circumstances is to perform a meta-analysis of the published clinical trials[15]. The current meta-analysis was to evaluate the role of NAC in treatment of gastric cancer and explore the optimal strategy for chemotherapy delivery.

All published controlled trials comparing NAC vs no treatment before surgery in patients with locally advanced gastric cancer were included in our analysis. Blindness of the trial was not necessary. The inclusion criteria were patients with pathologically diagnosed gastric adenocarcinoma and no history of prior treatment before entering the trial but a history of potentially curative surgery. A study was chosen if it was updated. NAC was performed through oral or intravenous (IV), intraperitoneal (IP) and intra-arterial (IA) infusion. Studies on preoperative radiotherapy or immunotherapy were excluded. Postoperative therapies were not included in our study.

Primary outcome was the odds ratio (OR) of intervention with overall survival rate. Secondary outcome was the OR of R0 resection rates and tumor down-staging, which was represented as the percentage in stage pT0-2 after surgery. If the 95% confidence interval (CI) of the OR included 1.0, no difference was considered between the groups. Subgroup analysis was used to explore and explain the differences in results of different studies. Sensitivity analysis was also performed to show the publication bias.

Cochrane archives of clinical comparative trials, MEDLINE, Embase and American Society of Clinical Oncology meetings were retrieved from 1978 to 2010, with a censor date up to April 2010. The search strategy terms used in the English databases were “neoadjuvant chemotherapy OR preoperative chemotherapy” AND “gastric cancer OR stomach cancer OR stomach neoplasm OR gastric carcinoma” AND “clinical trial”. Trials published in journals or published as meeting abstracts with essential data were included. Non-controlled trials were excluded. Randomized controlled trials with three or more arms were retained if at least two arms addressed an eligible comparison. Studies on patients with metastatic gastric cancer at enrollment were excluded.

Methodological quality of trials was evaluated according to the Jadad quality scores[16], which include secure method of randomization, allocation concealment, patient and observer blinding, and losses to follow-up. Based on these criteria, the studies were divided into high quality group (score ≥ 4) and low quality group (score < 4). Two reviewers independently assessed the eligibility of each trial.

RevMan software 5.0 was employed for the meta-analysis[17]. Continuous data were expressed as weighted mean difference. OR for dichotomous parameters including overall survival rate, tumor down-staging, and R0 resection rate was recorded. Results were reported as 95% CI. All meta-analyses appraised inter-study heterogeneity using χ2-based Q statistics for statistical significance and I2 statistics for the degree of heterogeneity. P < 0.10 was considered statistically significant and I2 > 50% showed a large heterogeneity. If there was no heterogeneity, a fixed-effect model was used. Otherwise, a random-effect model was used. The number needed to treat (NNT) was applied for outcomes with a statistical difference. Publishing bias was tested using the funnel plot. Sensitivity analysis was performed to investigate the possible influence of the study quality on the results. The main outcome of high-quality trials was analyzed. Subgroup analysis was used to explore and explain the diversity in results of different studies for collecting information with different characteristics, such as tumor grade, chemotherapy regimen, and race.

A total of 354 studies were retrieved. After abstracts were read, 335 studies were found to be unrelated to our selection criteria and it was impossible to extract data from another 5 studies. Thus, only 14 studies[18-31] were eligible for our meta-analysis. The enrolled 2271 gastric cancer patients in the studies were divided into NAC group (n = 1054) and control group (n = 1217). Of the 14 studies, 9 were from Asian and 5 from Western countries. NAC routes were IV, IA, IP, and oral in 7, 2, 1, and 4 studies, respectively. The median follow-up time of the patients across the studies was 54 mo (Table 1). The quality of included studies was assessed according to the Jadad quality scores[16] for the 4 requirements (method of randomization, allocation concealment, blindness, and completeness of follow up). Accordingly, 6 studies had a score greater than 4 (high quality, low risk of bias)[18-21,24,30] (Table 2). 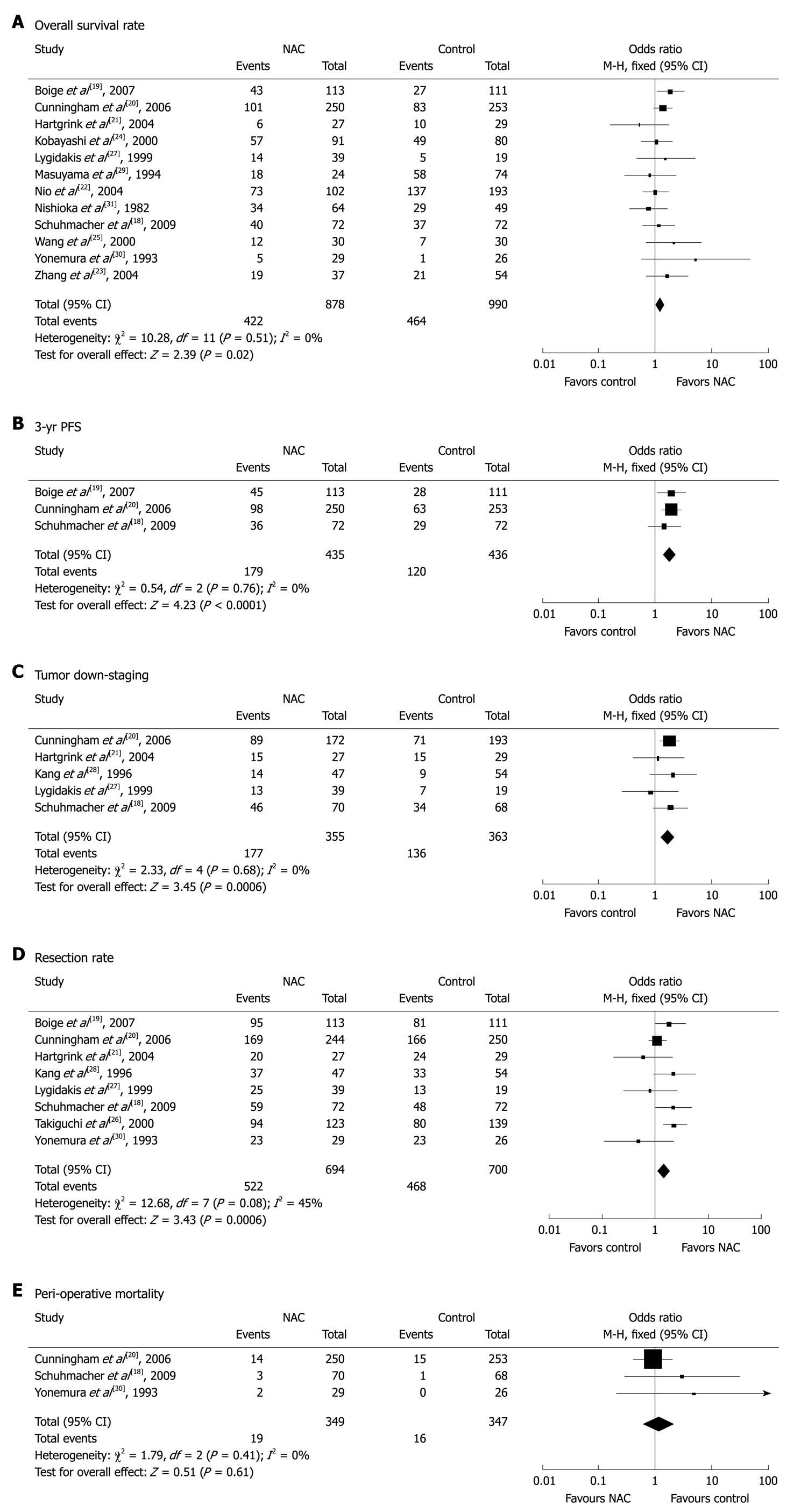 Overtreatment of early gastric cancer with NAC is a potential concern. Whether later stage gastric cancer (T3-4) is the optimal group for NAC was analyzed. A Japanese trial[2] on serosa-negative cancer including node-positive disease showed that the 5-year disease-free survival rate and overall survival rate are 83% and 86%, respectively for gastric cancer patients receiving D2 surgery (gastrectomy with extended lymph-node dissection), indicating that early-stage gastric cancer patients may be cured with adequate surgical therapy alone rather than with NAC. Subgroup analysis also showed that the outcome of NAC for gastric cancer was better in trials from Western countries than in those from Asian countries. Of the 14 trials included in the present study, 6 were from Japan that included more patients with gastric cancer diagnosed at an earlier stage, thus possibly influencing the final results.

Disease progression during NAC is another potential concern due to a loss of opportunity for surgery. In our meta-analysis, two trials[18,22] showed a disease progression rate of 2.9% (4/138). Of the 402 patients with gastric cancer, 108 (26.9%) in NAC group underwent palliative resection (n = 76) or with their tumor unresectable (n = 32), which was lower than that (33.8%) in control group[18,20-22,30], indicating that disease progression after NAC is not a major concern for its resection.

A major concern in our meta-analysis was the quality of studies included. Since no sufficient randomized controlled trials were available on NAC for gastric cancer, our current meta-analysis included quasi-randomized or non-randomized but controlled trials with basic data that could be used for comparison. Sensitivity analysis was therefore performed to determine the effect of trial quality on the final results. Six high-quality trials with a Jadad score ≥ 4[18-21,24,30] reported the overall survival rate with an OR of 1.35 (95% CI: 1.06-1.73) compared to that with an OR of 1.27 (95% CI: 1.04-1.55) in all the studies (Figure 3A), indicating that the results are consistent with those in all the trials and are therefore independent of trial quality. Furthermore, the symmetrical shape of ‘funnel plot’ when drawing together survival rate and sample size for all the studies indicated that no obvious publication bias was found in our meta-analysis (Figure 3B). 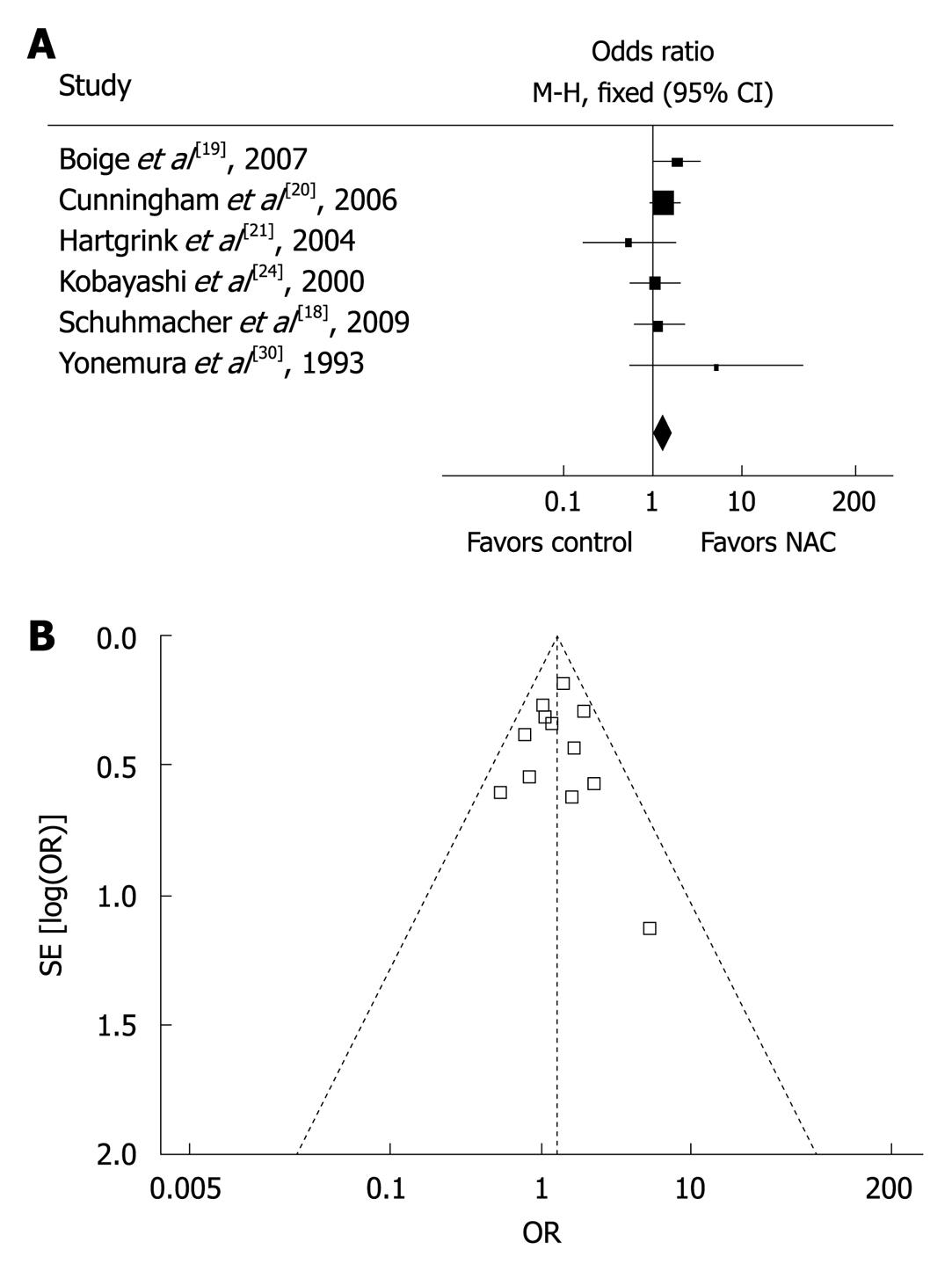 Figure 3 Odds ratio (A) and publication bias (B) in studies included in this study. A: Sensitivity analysis for overall survival: high-quality studies (Jadad score ≥ 4); B: Funnel plot analysis of potential publication bias.

NAC has been proven effective against some cancers, such as breast cancer[35]. However, it is not generally recommended for gastric cancer, primarily because of differences in treatment modalities for gastric cancer between Asian and Western countries. A Western study demonstrated that D2 surgery can effectively remove lymph nodes[36], whereas a Japanese study showed that D2 surgery is highly effective and safe, and recommended as a routine surgery[4]. It was reported that chemoradiotherapy is the standard therapy for gastric cancer after operation in USA[37] and most appropriate for the D0 dissection population. Whether post-chemoradiotherapy benefits D2 dissection patients lacks strong evidence. It has been shown that perioperative chemotherapy can prolong the survival time of locally advanced gastric cancer patients who tolerate preoperative chemotherapy better than postoperative chemotherapy[20]. Therefore, NAC is a hopefully good option for locally advanced gastric cancer, although further studies are required to determine its best regimen.

Meta-analysis was used to evaluate the value of NAC for advanced gastric cancer in this study.

The meta-analysis provided the up-to-date evidence for the positive effect of NAC on locally advanced gastric cancer. NAC improved the R0 resection rate (95% CI: 1.19-1.91), tumor down-staging (95% CI: 1.26-2.33) and survival rate (95% CI: 1.04-1.55) for the 2271 patients enrolled in 14 trials. No obvious safety concerns were raised in these trials. These findings suggest that NAC can improve the survival rate of patients with advanced gastric cancer.

With the increasing acceptance of the concept of NAC, additional studies on new regimens and well-designed powerful trials are highly encouraged in patients with locally advanced gastric cancer.

MAGIC trial: A phase III clinical trial conducted by the Medical Research Council Adjuvant Gastric Infusional Chemotherapy, showing the effect of perioperative chemotherapy on advanced gastric cancer. INT-0116 study: The Intergroup-0116 study reporting that postoperative chemoradiotherapy is effective against gastric adenocarcinoma or gastroesophageal junction. D2 surgery: D2 lymphadenectomy which was defined according to the rules of the Japanese Research Society for Gastric Cancer and, therefore, included all lymphnodes of levels N1 and N2. Adverse events: Assessed according to the Common Toxicity Criteria of the National Cancer Institute (version 2.0) and defined as grade 0-4. Tumor stage: Assessed according to the International Union against Cancer: TNM classification of malignant tumors. “pT” indicates the pathological stage after surgery and “cTNM” indicates the clinical pretreatment tumor stage. S-1: An orally active combination of tegafur (a prodrug that is converted by cells to fluorouracil), gimeracil (an inhibitor of dihydropyrimidine dehydrogenase, which degrades fluorouracil), and oteracil (which inhibits the phosphorylation of fluorouracil in the gastrointestinal tract, thereby reducing the gastrointestinal toxic effects of fluorouracil) with a molar ratio of 1:0.4:1.