In the last few years, liver disease associated with hepatitis C virus (HCV) has emerged as a significant problem in human immunodeficiency virus (HIV)-infected patients, thanks to improved survival in the highly active anti-retroviral therapy (HAART) era[1]. It has been reported that HIV and HCV co-infection leads to a more rapid progression of liver disease to cirrhosis[2,3]. Other factors such as severe immune suppression and alcohol consumption accelerate the progression of HCV-related fibrosis[4,5]. Virologically successful HAART slows the progression of liver fibrosis (LF) and reduces hepatic necroinflammatory activity in HIV/HCV co-infected patients[2,6]. In contrast, antiretroviral-related liver toxicity could contribute to liver damage in HIV- and HIV/HCV-infected patients[7]. Mitochondrial toxicity of nucleoside analogues[8], and glucose or lipid abnormalities, such as hyperglycemia and lipodystrophy, which are particularly common when using some protease inhibitors[9], may produce or enhance LF progression in HIV mono- and HIV/HCV co-infected patients. Currently, in this respect, a growing number of cases of cryptogenetic liver disease in symptomatic and asymptomatic HIV-infected patients has been reported[10,11].

Percutaneous liver biopsy is the gold standard for assessing LF. However, it may be associated with sampling variability[12], is an invasive technique with rates of morbidity of 3% and mortality of 0.03%[13,14], and as a consequence, is not suitable for repeated assessment, which is required when monitoring LF.

On the other hand, many biochemical markers have been implemented to estimate LF, with the aim of reducing the number of liver biopsies[14].

The advent of TE and biochemical markers has been demonstrated to be very helpful in the non-invasive measurement of LF, particularly in asymptomatic HIV-infected patients in whom liver biopsy is not recommended[11]. TE has already been validated for the measurement of LF in HIV and HCV seropositive patients[17,18].

The aim of this study was to assess the prevalence of LF and cirrhosis in a group of HIV mono-infected, HCV mono-infected and HIV/HCV co-infected patients using TE and biochemical markers. In addition, we evaluated which of the factors studied correlated with advanced LF (ALF) and cirrhosis.

Information on age, gender, risk factors for HCV and HIV infections, cumulative exposure to non-nucleoside and nucleoside reverse-transcriptase inhibitors, protease inhibitors and specific antiretroviral drugs within each class were all recorded in a database designed for this study.

Alcohol intake > 20 g/d either at the time of the study or in the past was recorded through patient interviews. Diabetes or impaired fasting glucose (IFG) were defined according to the Expert Committee on the Diagnosis and Classification of Diabetes Mellitus criteria[19].

Patients with acute liver decompensation, hepatocellular carcinoma or chronic hepatitis B were excluded.

The study protocol conformed to the ethical guidelines of the 1975 Declaration of Helsinki. Patients were enrolled after written informed consent was obtained.

The tip of the probe transducer was placed in the intercostal spaces at the right lobe of the liver. Only patients with 10 valid elastometric measures, interquartile ranges > 30% and ≥ 60% success rate (the number of validated measurements divided by the total number of measurements) were considered to be reliable. ALF (severe fibrosis and cirrhosis) was defined as a median LS of 9.5 kPa. As previously published, this cut-off value is strongly correlated with a Metavir score of F3, both in HCV mono-infected and HCV⁄HIV co-infected patients[17,18].

When data distribution was Gaussian, values were expressed as mean ± SD and their differences were calculated using the Student t-test; otherwise, data were expressed as the median and range and analyzed using the Mann-Whitney U test. Fisher’s exact and χ2 tests, the χ2 test of Mantel Haenszel, Spearman’s rank correlations (ρ) and Pearson’s correlation (r) were used where appropriate. Multiple linear regression analysis was used to study the association between increased values of LS and variables statistically significant at univariate analysis. All analyses were performed using the SPSS software package (version 13.0; Chicago, IL, USA).

A total of 201 patients on regular follow-up at both our Centers were enrolled in the study. 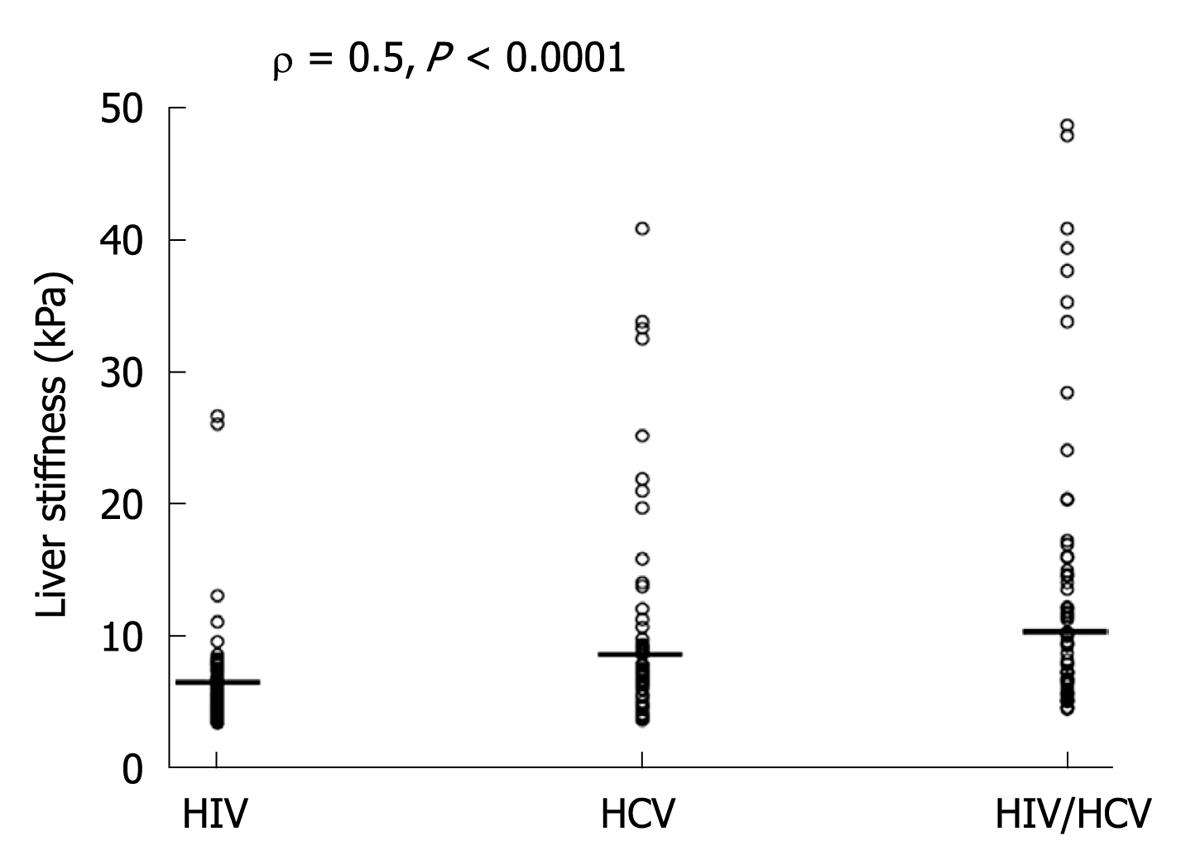 BMI, presence of diabetes or IFG, HCV- and HIV-viremia were not significantly correlated with LS in any of the 3 study groups. In addition, there was no significant correlation between the extent of LF under HAART exposure and duration of HAART exposure. There was no significant correlation either between extent of LF and cumulative exposure to each class of antiretroviral drugs (non-nucleoside/nucleoside reverse-transcriptase inhibitors, protease inhibitors) and of specific dideoxynucleoside analogues (didanosine, stavudine, zidovudine).

Our results, in agreement with other studies, confirmed that LF is more severe in HIV/HCV co-infected patients than in HCV or HIV mono-infected patients[5,23,24]. In addition, ALF was significantly associated with a lower CD4+cell count in co-infected patients. There is convincing evidence that co-infection with HIV worsens the prognosis of HCV-related liver disease. It has been reported that in patients co-infected with HIV and HCV the risk of progressing to cirrhosis and liver failure is higher than in those infected with only HCV[25,26], especially in individuals with CD4 < 200 cells/μL and alcohol consumption[2].

In our study, 20% of HIV/HCV co-infected patients were under virologically unsuccessful HAART and in 50% CD4+ levels were below 400 cells/mm3 suggesting, in agreement with former findings, that the less successful the response to HAART, the less marked is its clinical benefit. In fact, immune recovery under HAART has been associated with longer overall survival, slower progression of HCV-related liver damage in HIV co-infected patients and with lengthier survival times before death attributable to liver disease[27]. In the same way, Pineda et al[27] demonstrated that liver decompensation emerged earlier in patients who maintained an undetectable HIV viral load for a shorter period during follow-up. Nevertheless, the association between ALF and lower CD4 cell count suggests that the response to HAART, measured using CD4 cell gain and HIV viral load decline, determines the evolution of liver disease and that virologically and immunologically successful HAART may slow progression of LF in HIV/HCV co-infected patients.

On the other hand, antiretroviral-related liver toxicity could have further contributed to liver damage in our HIV population[7]. Mitochondrial toxicity of nucleoside analogues and glucose or lipid abnormalities, particularly common when using some protease inhibitors, may produce or enhance LF progression in HIV-seropositive patients. The correlation between use of antiretroviral drugs and LF in patients with HIV/HCV co-infection has been evaluated in different studies but with contradictory results[21,28-30].

Evaluation of LF using the 2 biochemical scores (APRI and FIB-4) was not in full agreement with LS measurement. In fact, these 2 biochemical tests were in agreement with TE values only for high-grade LF, but not in low and moderate LF, suggesting that at least in these cases liver biopsy could be necessary to assess the precise degree of LF. In this respect, we are aware that the lack of liver biopsy, as a reference tool of LF, is a limitation of our study.

More consideration, perhaps, should be given to transaminase levels. In fact, the HCV mono-infected group had the highest levels of transaminases, which may have influenced LS values by increasing them. This result could further support our observation that co-infected patients are at highest risk of LF because of their high AST levels and the immune suppression associated with a low CD4 cell count.

Finally, also in our area, HCV genotype 3 was confirmed to be more associated with HIV-positive patients, because of their habits as drug abusers[35].

In conclusion, in our population, HIV⁄HCV co-infected patients had more ALF than HCV and HIV mono-infected patients. This result was not correlated with long-term exposure to HAART but with a lower CD4 cell count, suggesting that immunologically successful HAART may protect from progression of liver damage in HIV/HCV co-infected patients. In addition, the detection of unsuspected ALF in HIV mono-infected patients confirms that FibroScan® is very useful in this population. HCV infection, with its different pattern of cytolysis, may condition LS values, but viral eradication is mandatory to reduce fibrosis progression. Finally, the use of these non-invasive parameters of LF should be considered with caution. In fact, from our data it emerges that both TE and the biochemical scores may be suitable only for high grades of LF. In contrast, for mild/moderate degrees of fibrosis, they could not replace liver biopsy in the correct evaluation of LF.

Liver disease associated with hepatitis C virus (HCV) has emerged as a significant problem in human immunodeficiency virus (HIV) patients, thanks to improved survival in the highly active anti-retroviral therapy (HAART) era. Co-infection with HIV is known to lead to a more rapid progression of HCV liver disease to cirrhosis. Other factors such as severe immune suppression and alcohol consumption accelerate the progression of HCV-related fibrosis. In addition, successful HAART slows the progression of liver fibrosis (LF), but antiretroviral-liver toxicity could contributes to hepatic damage in co-infected patients. The advent of transient elastography (TE) has demonstrated to be very helpful for the non-invasive measurement of LF.

Percutaneous liver biopsy is the gold standard for assessing LF but it is an invasive technique with risk of morbidity and mortality. For these reasons new non-invasive methods for the assessment of LF have recently been developed. TE (FibroScan®) and biochemical markers have demonstrated to be very helpful in the non-invasive measurement of LF. In this study, using these non-invasive tools, i.e. TE plus 2 biochemical tests, aminotransferase platelet ratio index (APRI) and FIB-4, we showed that advanced LF was significantly higher in HIV/HCV co-infected patients than in mono-infected patients and that it was significantly associated with lower CD4+ cells count. The APRI and FIB-4 tests correlated only with the highest values of TE, i.e. ≥ 9.5, suggesting that they are useful tools in diagnosing high grade liver disease, but in the case of a low or moderate degrees of LF liver biopsy remains the best means for correctly diagnosing the degree of fibrosis. Furthermore, the results showed that, overall, a greater number of HIV/HCV co-infected patients with undetectable HCV-RNA had either no or mild fibrosis (F0-F1) compared to the remaining co-infected patients with detectable HCV-RNA.

Several studies have been carried out to identify factors related to an accelerated progression of LF in HIV/HCV co-infected patients. Conflicting results have been reported in the literature about the role of antiretroviral therapy on the progression of LF. In the study, information on alcohol intake, duration of HCV infection and cumulative exposure to non-nucleoside and nucleoside reverse-transcriptase inhibitors, protease inhibitors and specific dideoxynucleoside analogues (didanosine, stavudine, zidovudine) was evaluated. The results showed that on univariate analysis liver stiffness (LS) was significantly associated with alcohol intake > 20 g/d in both HCV mono-infected and co-infected patients, but we did not find any correlations between LF and duration of HCV infection, HAART exposure, duration of HAART exposure or cumulative exposure to any class of antiretroviral drugs.

A good adherence to antiretroviral therapy, when it is indicated, is important to reduce the risk of progression of LF in co-infected patients. In addition, HCV mono- and co-infected patients should modify negative habits and lifestyles, such as alcohol consumption, which could accelerate the progression of LF. Important fields for further study could include the use and evaluation of the applicability of FibroScan® for repeated assessment in the monitoring of LF.

Transient elastometry (Fibro-Scan®; EchoSens, Paris, France) is a rapid, reliable and well-tolerated imaging technique for the assessment of LF by measuring LS.

The authors aimed to assess the prevalence of advanced LF (ALF) in HIV, HCV and HIV/HCV patients using TE and to identify factors associated with ALF. They concluded that HIV/HCV co-infected patients had ALF more frequently at TE than HCV and HIV mono-infected patients. The title reflects accurately the contents of the article, and the abstract delineates concisely the research.