AIM: To perform a meta-analysis to answer whether long-term recurrence rates after laparoscopic-assisted surgery are comparable to those reported after open surgery.

METHODS: A comprehensive literature search of the MEDLINE database, EMBASE database, and the Cochrane Central Register of Controlled Trials for the years 1991-2010 was performed. Prospective randomized clinical trials (RCTs) were eligible if they included patients with colon cancer treated by laparoscopic surgery vs open surgery and followed for more than five years.

CONCLUSION: This meta-analysis suggests that laparoscopic surgery was as efficacious and safe as open surgery for colon cancer, based on the five-year data of these included RCTs.

Colon cancer is the third most common malignancy in men and women[1]. Traditionally, cancers of the colon were removed through large abdominal incisions. Since the advent of laparoscopic surgery, it has become clear that patients benefit from a minimally invasive approach in a variety of ways[2]. In 1991, laparoscopic-assisted colectomy (LAC) was first reported[3,4]. Short-term advantages of laparoscopic colorectal surgery compared to conventional surgery are well known, and include less pain, better pulmonary function, shorter duration of postoperative ileus, less fatigue and a better quality of life[5-8].

However, it was uncertain whether there would be a long-term survival difference. Several large trials have been reported which discuss the long-term survival difference. The primary aim of these trials is to test the hypothesis that disease-free survival and overall survival are equivalent, regardless of whether patients receive laparoscopic-assisted or open colectomy. The second aim is to assess the recurrence of cancer. The objective of this systematic review is to assess that in the long-term, laparoscopic-assisted colon resection for cancer is not inferior to open colectomy with respect to cancer survival and recurrence. The main outcome of concern is overall mortality and recurrence.

MATERIALS AND METHODS
Identification and selection of studies

Treatment effects were expressed as risk ratios with corresponding 95% confidence intervals (95% CI). Where possible, outcomes were pooled with a fixed effects model and random effects model. Heterogeneity was assessed using the χ2 statistic and the proportion of variation due to heterogeneity was expressed as I2. In the absence of significant heterogeneity (P > 0.05 for χ2), fixed-effects model (inverse variance method) was used, and in the presence of significant heterogeneity (P < 0.05 for χ2) and random effects (DerSimonian-Laird method) models. If substantial heterogeneity was found in the included studies, the result was reported from the random effects model. A P value of 0.05 was used as the cut-off value to determine statistical significance. The meta-analyses were performed by using Review Manager 4.2 provided by The Cochrane Collaboration. If data for meta-analysis was considered inappropriate in the included studies, some outcomes were presented in a descriptive way.

Funnel plots were constructed to evaluate potential publication bias using the standard error and diagnostic odds ratio, however, because there are only three studies included, the funnel plots will not be very helpful and will not be shown in the article.

A total of 66 published articles of RCTs comparing laparoscopically assisted and open surgery for colon cancer were identiﬁed. Of these trials, there were 19 articles just with short-term outcomes available and another 17 articles with regard to the colorectal cancer. In addition, 21 articles had not reported relevant information. So there were 9 potential articles left to further review. Of these trials, 4 studies were excluded because there were less than 100 patients included[10-13]. Two studies were reported at a different time. So finally 3 studies involving 2147 patients reported long-term outcome data and were included in the analysis. All of the included studies were published as full articles. Baseline characteristics of included studies are described in Table 1. Quality assessment revealed that all studies were of good or moderate quality (Table 2), indicating that all studies were of reasonable methodological quality; none of the studies had any “fatal” methodological flaws.

In 2008, Lacy et al[15] reported the long-term results of a randomized clinical trial of laparoscopy-assisted vs open surgery (LAC vs OC) for colon cancer. Two hundred and nineteen patients entered the study. The median follow-up was 95 mo. There was a tendency towards higher cancer-related survival (P = 0.07, NS) and overall survival (P = 0.06, NS) for the LAC group. The regression analysis showed that LAC was independently associated with a reduced risk of tumor relapse (hazard ratio 0.47, 95% CI: 0.23-0.94), death from a cancer-related cause (0.44, 0.21-0.92) and death from any cause (0.59, 0.35-0.98). So they concluded that LAC is more effective than OC in the treatment of colon cancer. In 2002, Lacy et al[5] reported the same study with a median length of follow-up of 43 mo, demonstrating that LAC was more effective for treatment of colon cancer in terms of morbidity, hospital stay, tumor recurrence, and cancer-related survival. 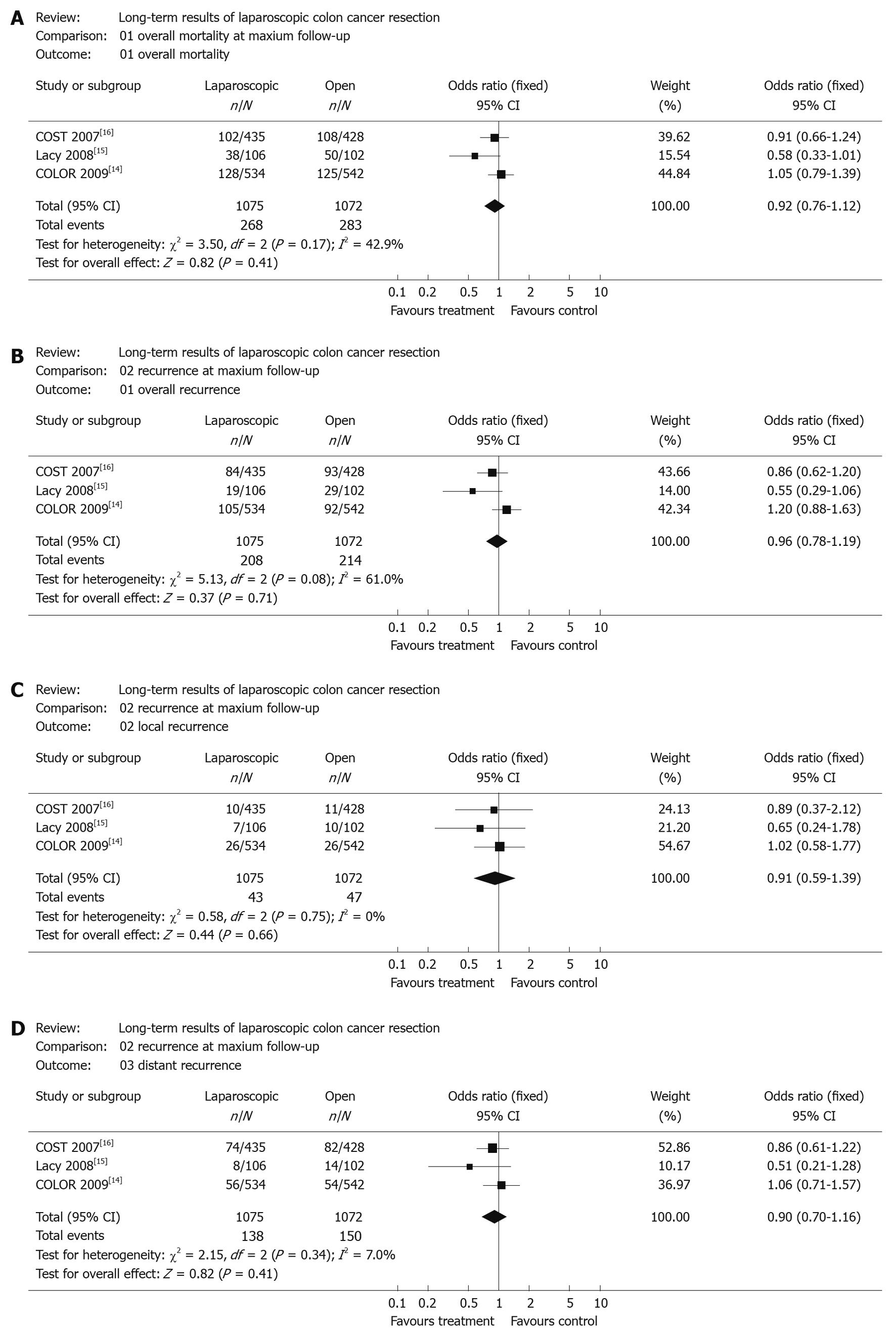 Overall and local and distant recurrence

Colon cancer is one of the most common cancers in both female and male persons. Treatment involves surgical resection of the segment of the bowel containing the tumor and wide tumor-free margins. Lymph nodes in the area are also removed. Conventional surgery is the mainstream treatment of colorectal cancer and has good survival rates for stage-1 tumors. For many people it is now possible to use video-endoscopic surgery (laparoscopy), which may have short term advantages that include less pain, better pulmonary function, shorter time for return of bowel function (duration of postoperative ileus), less fatigue, and improved convalescence, as suggested in a Cochrane systematic analysis on short-term outcomes[18]. This meta-analysis also demonstrated that postoperative duration of hospital stay is less and quality of life may be improved in the early postoperative course. Furthermore, the risk of postoperative morbidity is decreased by the laparoscopic approach, namely because of a reduced surgical morbidity.

However, the procedure is complex and for colon cancer the long-term results on survival are not known. There are several large RCTs published and several systematic reviews performed to assess the difference between the laparoscopic and open approach. In 2007, Bonjer and his colleague[19] performed a meta-analysis of trials randomizing patients with colon cancer to laparoscopically assisted or open colectomy to determine whether laparoscopic colectomy for cancer is oncologically safe. Patients included in this analysis had at least 3 years of complete follow-up data. Of 1765 patients, 229 were excluded, leaving 796 patients in the laparoscopically assisted arm and 740 patients in the open arm for analysis. Three-year disease-free survival rates in the laparoscopically assisted and open arms were 75.8% and 75.3%, respectively. The 3-year overall survival rate after laparoscopic surgery was 82.2% and after open surgery was 83.5%. Disease-free and overall survival rates for stages I, II, and III evaluated separately did not differ between the 2 treatments. So they concluded that laparoscopically assisted colectomy for cancer is oncologically safe. Again in 2007, Kahnamoui and his colleagues[20] published a systematic review on laparoscopic surgery for colon cancer. The results of this review suggest that, although there is no definitive answer, overwhelming evidence presently indicates that laparoscopic colon cancer resection is as safe and efficacious as the conventional open technique. In 2008, Kuhry and his colleagues[21] published a Cochrane systematic review of randomised controlled trials on the long-term outcomes of laparoscopic surgery for colorectal cancer with the median follow-up from 19-59 mo. No signiﬁcant difference in tumour recurrence after laparoscopic and open surgery for colon cancer was observed (3 RCTs, hazard ratio for tumour recurrence in the laparoscopic group 0.86; 95% CI: 0.70-1.08). Similarly, in colon cancer patients, no signiﬁcant differences in overall mortality were found (2 RCTs, hazard ratio for overall mortality after laparoscopic surgery 0.86; 95% CI: 0.86-1.07). So they also concluded that laparoscopic resection of carcinoma of the colon is associated with a long-term outcome that is similar to that after open colectomy.

All 3 systematic reviews demonstrated that laparoscopic colon cancer resection is as safe and efficacious as the conventional open technique in terms of 3-year survival and 3-year disease-free survival and recurrence.

The main objective of this present meta-analysis is to demonstrate that in the long run, laparoscopic colon cancer resection is also as safe and efficacious as open surgery, especially for overall 5-year survival and mortality and recurrence. So the duration of follow-up of all included studies was more than 60 mo, as shown in the table of patient characteristics. There are several characteristics of the three included trials. First, all 3 included trials had a large sample size, especially COST trial (863) and COLOR (1076) trial. Second, the quality of the 3 trials is very high. Third, all of the patients only had colon adenocarcinoma. Additionally, the follow-up was very long. So the combined results from the 3 studies should be convincing. 2147 patients were included in this meta-analysis. The overall mortality was similar in the two groups (24.9%, 268/1075 in the laparoscopic group and 26.4%, 283/1072 in the open group) with no significance detected, as was the overall recurrence regardless of local or distant recurrence. Both the overall 5-year survival (about 74%) and 5-year disease-free survival (about 68%) were similar between the two groups, and no significant difference was demonstrated. From these results, laparoscopic colon cancer resection was demonstrated to be as safe and efficacious as the open surgery, as we expected.

In conclusion, compared to open surgery, laparoscopically assisted colectomy has been demonstrated to have short term advantages that include less pain, better pulmonary function, shorter time for return of bowel function (duration of postoperative ileus), less fatigue, improved convalescence, and more importantly reduced surgical morbidity and shorter duration of hospital stay. From the 3-year long-term data, laparoscopic surgery was also demonstrated to be as safe and efficacious as the conventional open approach. Our present work again demonstrated that, in terms of long-term outcomes of trials a the median follow-up more than 5 years, laparoscopic surgery is also as safe and efficacious as the conventional open approach. In addition, laparoscopic resection is associated with a modest additional cost, compared with open surgery. So regardless of the short-term outcomes or the long-term outcomes or even the cost-effectiveness, we could conclude that laparoscopic surgery is not inferior to the conventional open approach. From these analyses above, we think that for colon adenocarcinoma, laparoscopic assisted colectomy should be the preferred choice as appropriate.

The objective of this systematic review is to assess that in the long term, laparoscopic-assisted colon resection for cancer is not inferior to open colectomy with respect to cancer survival and recurrence.

This meta-analysis suggests that laparoscopic surgery was as efficacious and safe as open surgery for colon cancer, based on the five-year data of the included randomized clinical trials.

For colon adenocarcinoma, laparoscopic assisted colectomy should be the preferred choice as appropriate.

The study was well structured and gives interesting information about the present status of laparoscopy and colon cancer. The main strength is the longer follow up of patients and the criteria to be included. I think this manuscript should be interesting for surgeons dealing with this disease.