AIM: To construct the CABYR RNAi plasmid and study its relation with the nuclear factor (NF)-κB signal transduction pathway.

RESULTS: The CABYR and NF-κB expressions were detected in 293T cells. The oligonucleotide (5’-GCTCAGATGTTAGGTAAAG-3’) efficiently silenced the expression of CABYR. The expression of NF-κB was not significantly affected by silencing CABYR (P = 0.743).

CONCLUSION: CABYR can be found in the human embryo cell line 293T. Cabyrmid 2 can efficiently silence its target, CABYR, indicating that CABYR is not related with the NF-κB signal transduction pathway.

Human CABYR mRNA sequence was obtained from GenBank (Accession number NM_153768). Three possible target sites to this sequence were chosen with the GenScript SiRNA target finder. BLAST was used to identify whether they are exclusive to CABYR. The target sequences are 5'-CCATCAAACATCAACCAGT-3' (nt 240-258), 5'-GCTCAGATGTTAGGTAAAG-3' (nt 627-645) and 5'-GCTCTCTGACACATCTTT-3' (nt 1256-1273). A short hairpin RNA (shRNA) was designed for use in RNA interference (RNAi) according to the three targets. The TTCAAGAGA sequence is part of the “loop” motif in the shRNA, and the transcription terminator is TTTTT. Restriction endonuclease sites for BbsI, KpnI + BamHI were incorporated into the shRNA sequence, along with a sense and antisense sequence for each cDNA. Single-stranded oligonucleotide DNAs were synthesized by Shanghai Sangon Biological Engineering Technology and Service Company (Shanghai, China). Relative cDNAs are composed of a DNA double strand and a conjunct with pSilence1.0 plasmid. The plasmids were transformed into competent cells and possible transformants were identified, which are resistant to ampicillin. The plasmids were purified using the plasmid minipreps purification system B (BioDev, Beijing, China), then incubated with KpnI to linearise and sequenced to confirm their identity. The 293T cells were transfected with CABYR-shRNA, shRNA control and pEGFP (reference of transfection efficiency) using the Effectene transfection kit (Qiagen, Hilden, Germany). CABYR-shRNA 1, CABYR-shRNA 2 and CABYR-shRNA 3 were designated as Cabyrmid 1, Cabyrmid 2 and Cabyrmid 3, respectively.

The β-actin gene was used as the reference gene when the results were quantified. The primers employed were β-actin (forward: 5'-ACAGAGCCTCGCCTTTGCC-3' and reverse: 5'-CATGTCGTCCCAGTTGGTG-3'), CABYR exon2 (forward: 5'-CAACCCATCAAACATCAACC-3' and reverse: 5'-TGCCATTGCTAACATCTGAG-3'), CABYR exon 4 (forward: 5'-CAGACACAGACGAGGACAATG-3' and reverse: 5'-TCC GTT TGC TCA GTG CCT-3'), NF-κB (forward: 5'-GAGACATCCTTCCGCAAACT-3' and reverse: 5'-TCCTTCCTGCCCATAATCA-3'). Total RNA was extracted from 293T cells using Trizol (Invitrogen, Shanghai, China) following its manufacturer’s instructions, with quality and quantity determined by measuring the optical density at 260 nm and 280 nm. An A260/280 ratio of approximately 1.8 indicated that the RNA sample was of sufficient purity. The RNA integrity was also checked by electrophoresis. Total RNA was reverse transcribed into cDNA using a RevertAid™ cDNA first strand synthesis kit (Fermentas, Ontario, Canada). Thirty cycles of semi-quantitative polymerase chain reaction (PCR) were conducted in a 25 μL volume, with an annealing temperature of 56°C. The PCR products were visualized by agarose gel electrophoresis.

Changes in NF-κB expression were detected before and after CABYR RNAi treatment by quantitative real-time PCR (qPCR). Total RNA was extracted and reverse transcribed into cDNA using a RevertAid™ cDNA first strand synthesis kit (Fermentas, Ontario, Canada). The primers used in the qPCR are CABYR exon 4 (forward: 5'-CAGACACAGACGAGGACAATG-3' and reverse: 5'-TCCGTTTGCTCAGTGCCT-3'), β-actin (forward: 5'-GCACTCTTCCAGCCTTCCTT-3' and reverse: 5'-GGTCTTTGCGGATGTCCA-3'), NF-κB (forward: 5'-GAGACATCCTTCCGCAAACT-3' and reverse: 5'-TCCTTCCTGCCCATAATCA-3'). cDNA for the blank group was diluted at 1:1, 1:10, 1:100, 1:1000 and 1:10 000 and used in over 40 cycles of two-step qPCR in a 25 μL volume, with an annealing temperature of 62°C. A SYBR Premix Taq kit from Takara Bio (Shiga, Japan) was used. The results were analyzed using the Rotor-gene real-time analysis software.

The transcripts of CABYR and NF-κB were detected in 293T cells (Figure 1).

Figure 1 Basic expression of CABYR (A) and nuclear factor-κB (B) at mRNA level in 293T cells. Total RNA was extracted from 293T cells with Trizol and reverse transcribed to 293T cDNA with the primer Oligo(dt). The target fragment was amplified by semi-quantitative polymerase chain reaction and analyzed by agarose electrophoresis (1%). CABYR and nuclear factor (NF)-κB were detectable in 293T cells, indicating that 293T cells can be used to identify the efficient silence fragment for CABYR and study the relation between CABYR and NF-κB. 1: β-actin; 2: CABYR; 3: NF-κB; M: Marker.
Construction of CABYR shRNA eukaryotic expression vector

The gene fragment was inserted between the restriction sites of BbsI and BamHI in pSlience1.0 (Figure 2). The plasmid also contained a restriction site of KpnI, and a KpnI recognition sequence was incorporated into the ends of our gene fragment. Possible recombinant plasmids were identified by digesting with the appropriate restriction endonuclease and a 396-397 bp product would be liberated if the target fragment was correctly incorporated (Figure 3). The identified recombinant plasmids were sequenced by Shanghai Sangon Company for further verification (Figure 4). 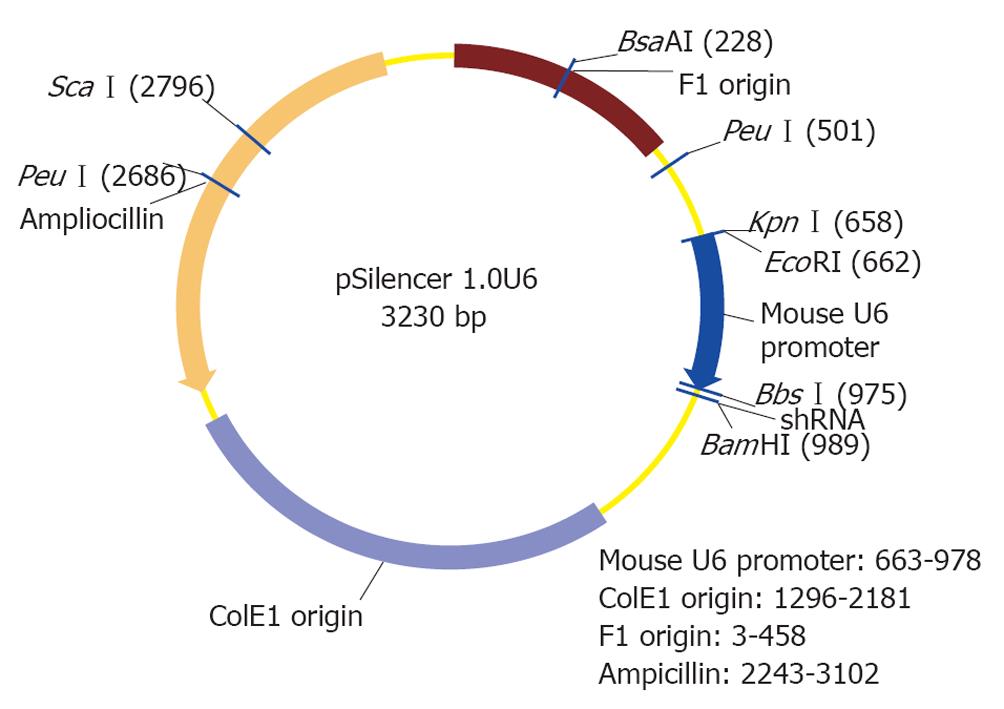 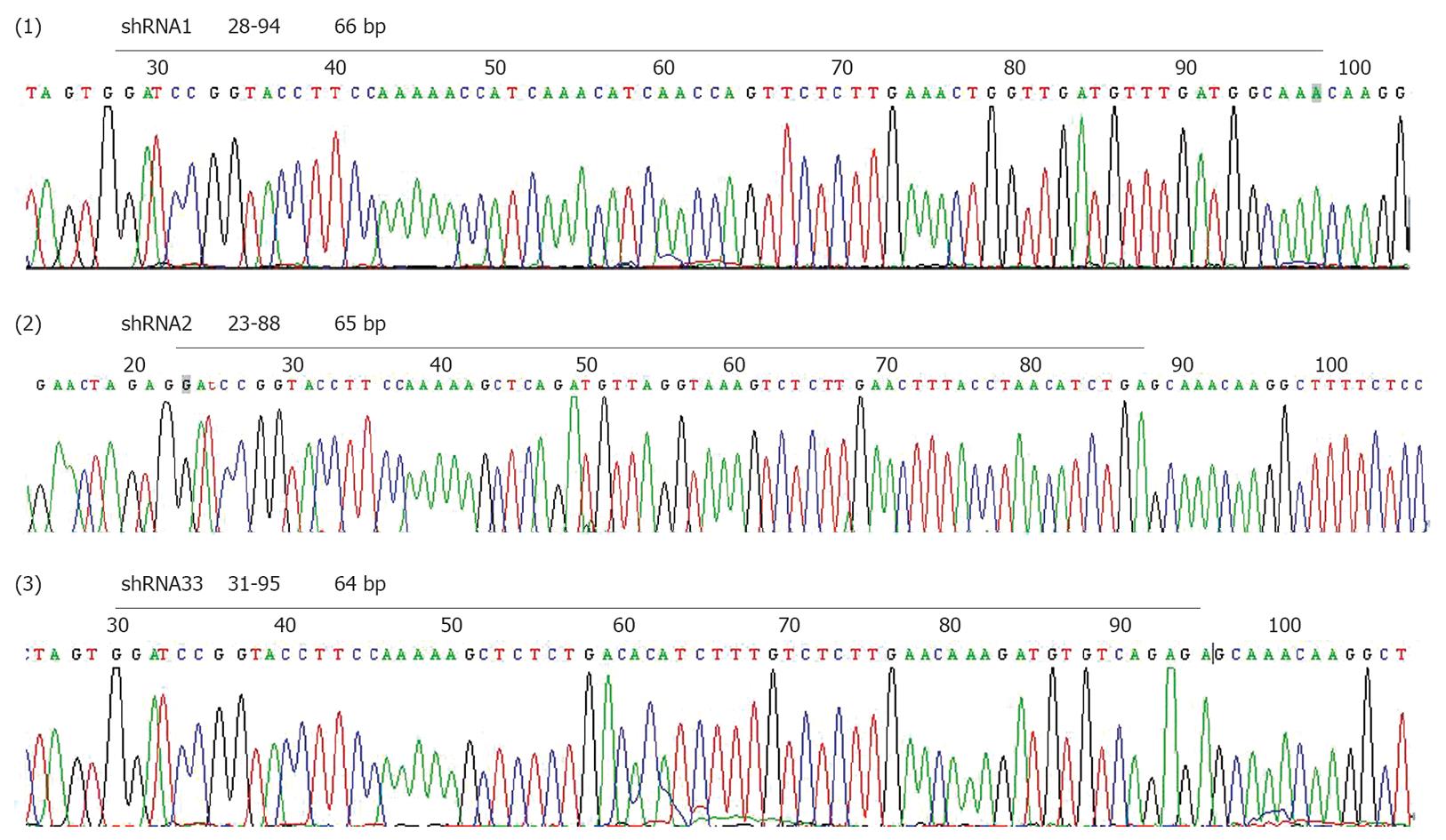 GFP was highly expressed in the reference group, indicating that a high efficiency of transfection can be achieved in the other groups under the same conditions (Figure 5). CABYR mRNA was also expressed in the blank control, vacant vector control and CABYR RNAi groups. The CABYR mRNA expression was decreased in CABYR RNAi group, indicating that 5'-GCTCAGATGTTAGGTAAAG-3' is an efficient silencing target for CABYR (Figure 6).

According to the standard curve generated, CT exhibited a strong linear correlation between CABYR and NF-κB at different diluted concentrations, thus the precise results could be obtained using qPCR. The M value for β-actin, CABYR and NF-κB was approximately uniform, indicating that their amplification efficiency is similar. The concentration of target fragment was analyzed using the ∆(∆CT) method. The results showed that the mRNA expression was obviously decreased in the siRNA2 group, indicating that 5'-GCTCAGATGTTAGGTAAAG-3' can silence the expression of CABYR mRNA transcript, while the expression of NF-κB was not affected by silencing CABYR (P = 0.743), displaying that CABYR has no significant effect on the expression of NF-κB (Table 1).

In this study, a CABYR silencing plasmid was constructed with its function observed. CABYR, first identified in the testis by Naaby-Hansen et al[16], plays a key role in protein tyrosine phosphorylation and increases the concentration of intracellular calcium. Its transcript variants encode multiple protein isoforms, but spliceosome III/V is not specific for testis[15]. CABYR can be found in pancreas, fetal brain, liver, motile cilia of human bronchus and fallopian tubes[17]. In this study, CABYR was identified in the human embryo cell line 293T.

Cabyrmid 2 is an effective CABYR silencing plasmid. In this study, 3 target fragments of CABYR were designed using the GenScript SiRNA target finder and compared with the corresponding sequences in GenBank to determine its specificity[18]. The CABYR shRNA we constructed, inserted downstream from the strong U6 promoter in pSilence 1.0 and transcribed, which became a functional siRNA with an ability to degrade CABYR mRNA exclusively. The effective CABYR shRNA was screened by transfecting 293T cells via lipofection as previously described[19,20]. In this study, a highly effective CABYR silencing site, 5'-GCTCAGATGTTAGGTAAAG-3', was found, and a short hairpin plasmid that could effectively silence CABYR expression was constructed, which was designated as Cabyrmid 2.

The expression or repression of CABYR had no effect on NF-κB signaling pathways in our study. It has been shown that CABYR spliceosome III/V can act as an ideal substrate for GSK3β in the extensin-like domain[21]. GSK3β is known to play a key role in tumorigenesis[22-26] in conjunction with PI3K/Akt which plays a role in the regulation of the NF-κB transduction pathway. NF-κB plays an important role in embryo growth, differentiation and apoptosis of lymphocytes, immunological and inflammatory reactions[27-31]. Abnormal CABYR and NF-κB have been detected in the same cancers, and CABYR possesses a tyrosine kinase activity which is an important kinase in various signaling pathways, suggesting that CABYR may be related with NF-κB. However, no significant effect of CABYR was observed on the expression of NF-κB in this study.

Two reasons can explain why CABYR had no significant effect on the expression of NF-κB in this study. One is that the 293T cells were used while the NF-κB signaling pathway was normal. If their relation was detected in Bxpc3 (NF-κB dysfunction), other results may be observed. The other is that NF-κB exists as an inactive precursor (p50, p60, IκBα) in cytoplasm. After NF-κB is activated, IκBα is phosphorylated and detached from the conglomeration. The remaining molecules enter the nuclei and adhere to target DNA, thereby enhancing transcription. Phosphorylation of IκBα is a key step in the NF-κB pathway. Though no significant effect of CABYR was observed on the expression of NF-κB in this study, CABYR possesses a tyrosine kinase activity possibly affecting the NF-κB pathway by phosphorylating IκBα. It has been reported that G3BP2 (RasGAP SH3-binding protein 2) is able to discriminate between amino terminals of IκBα[32] related with the retention of IκBα/NF-κB conglomeration in cytoplasm. CABYR also contains a PXXP motif, similar to G3BP2 which is a core part of the SH3 aglucone. A study involving the influenza A virus demonstrated that the structure of SH3 plays a key role in determining the activity of PI3K/Akt[33]. The PI3K/Akt signaling pathway can also regulate the phosphorylation of IκBα, indicating that CABYR may take part in the regulation of the NF-κB signaling pathway.

In summary, CABYR is not exclusive to the testis and codes for a calcium-binding tyrosine-phosphorylation regulated protein that is intimately involved in calcium signaling. Cabyrmid 2 can efficiently silence CABYR expression rather than the expression of NF-κB in 293T cells.

Tumor is a polygene mutation disease. The mutation gene effects on the signal transduction pathway inducing tumor cell’s (TC). Many abnormalities of signal transduction pathway in TC have been reported, such as ILK, AP-1, Wnt, and nuclear factor (NF)-κB. Recently NF-κB signal transduction pathway was hotly researched. It can enhance the transcription of the target gene relating to the apoptosis, proliferation and differentiation of lymphocyte. And its abnormality was also been found in many TC. CABYR is an capacitation related calcium binding tyrosine-(Y)-phosphorylation regulated gene, it has no absolute testis specificity, it was also reported that CABYR antigen was detected in many cancers such as lung cancer.

The authors constructed CABYR silence plasmid (Cabyrmid 2) and proved that CABYR RNAi plasmid 2 is the efficient silence target to CABYR. They also found that CABYR may have no relationship with NF-κB signal transduction pathway.

CABYR is a calcium binding tyrosine phosphorylation regulator gene. It was first found in testis by Naaby-Hansen in 2002. CABYR plays a key role in capacitation involving protein tyrosine phosphorylation and increased intracellular calcium. Transcript variants of this gene encode multiple protein isoforms. And its spliceosome III/V wasn’t seem to be absolute testis specificity. It also be found in the pancreatic tissue, fetal brain, sclerosis liver as well.

The authors have presented a basic study with convincing data. It will be suitable for publication after revision.