Weight loss supplements often contain powerful pharmacoactive ingredients with the potential to cause harm. Trials used to determine product safety and effectiveness, meanwhile, tend to be small, of short duration, and frequently lack financial conflict of interest disclosures. These factors could conspire to place consumers at risk, especially when published research cited in advertising cloaks products with the suggestion that their safety and effectiveness have been proven by science. Examples of current and former weight loss products backed by potentially conflicted or low quality research include Metabolife-356, Hydroxycut, Xenadrine and LeptiCore. Published research, especially in the field of weight loss supplements, needs better conflict of interest disclosure, and regulators should consider how research findings are used in marketing claims.

Hasani-Ranjbar et al[1] recently reviewed evidence behind dietary supplements used for weight loss. While this review provides data suggestive of methodological weaknesses, such as sample sizes and trial duration, and provides a sentence suggesting that safety concerns may not be fully addressed in the reviewed studies, the paper appears to underemphasize inherent flaws in the publications it reviews. Weaknesses that deserve special attention are the small size and short duration of the trials, and links to industry sponsorship, which are frequently not disclosed or inadequately disclosed in the studies themselves. These factors are important for both methodological reasons, and also reasons specific to the weight loss products being reviewed.

Substances tested for weight loss often have potent pharmacological effects[2], may be used by millions of consumers without medical supervision, and can be marketed without meeting the regulatory standards imposed on traditional pharmaceuticals[3]. These factors underscore the importance of assessing product safety as well as efficacy[3,4]. Safety in particular is difficult to establish when studies are of small size and short duration. Of the 19 human studies reviewed by Hasani-Ranjbar et al[1], the average number of participants was 64.4 (range 24-153), and the average study duration was 15 wk (range 2-36 wk). Such methodologically weak studies, combined with lax dietary supplement regulation and oversight, have several potential public health implications, including: (1) infrequent or rare side effects may not be detected by studies of only a few dozen subjects, resulting in a body of evidence that over-states product safety; (2) findings from short-term studies may not reflect actual usage patterns among consumers, who may use products for longer-term weight loss maintenance; (3) sustaining weight loss long-term studies are difficult, so short-term studies may be more likely to garner positive findings, and since publication bias has been reported in favor of positive findings[5], the resulting body of evidence may over-state product effectiveness; (4) to gain market approval under current regulations in the United States, dietary supplement manufacturers only need to submit a relatively low-level of evidence suggestive of product safety[4], (5) products may then go to market backed by findings that over-state their safety and effectiveness; and (6) post market surveillance may only detect adverse events (AEs) once the number of product users blossoms into the tens of thousands, and only after harms have occurred. Unlike in research settings, it is rarely possible to conclusively link harm to product usage in daily life, and in the United States post market surveillance only detects an estimated 1% of such AEs[6].

In pharmaceutical research, industry-funded studies may be more likely to report positive findings[7], and the same is likely for weight loss supplements[8]. Readers can account for this if papers provide clear conflict of interest disclosures. However, the standard financial conflict of interest and funding disclosures regularly seen in rigorous pharmaceutical research may not appear as frequently in dietary supplement research[8]. In some cases, this is further obfuscated when a lack of conflict declaration is used to denote a lack of conflict instead of a declarative statement that there is no conflict. As such it is much more difficult to assess which studies are potentially biased by industry support.

These weaknesses are illustrated by a study, reviewed by Hasani-Ranjbar et al[1], of an ephedrine-containing product named Metabolife-356[9]. This manufacturer-funded study reported significant reductions in body-weight and body-fat, with only minor side effects such as dry mouth, insomnia, nervousness, palpitation and headache[9]. However, once the number of users rose into the millions, Metabolife-356 was linked to 92 serious adverse cardiovascular events, including 5 deaths[10], and withdrawn from the US market. These harms were not, and statistically could not be, detected by studies as small (n = 67) as the one in question. The potential for similarly misleading conclusions to be reached about the safety or effectiveness of three currently available products is detailed in Table 1, with the sometimes-opaque relationships between study authors, commercial interests and products delineated in Figure 1. The similarities in potentially flawed conflict-of-interest disclosures suggest a possible trend extending to multiple publications about multiple products in multiple journals. 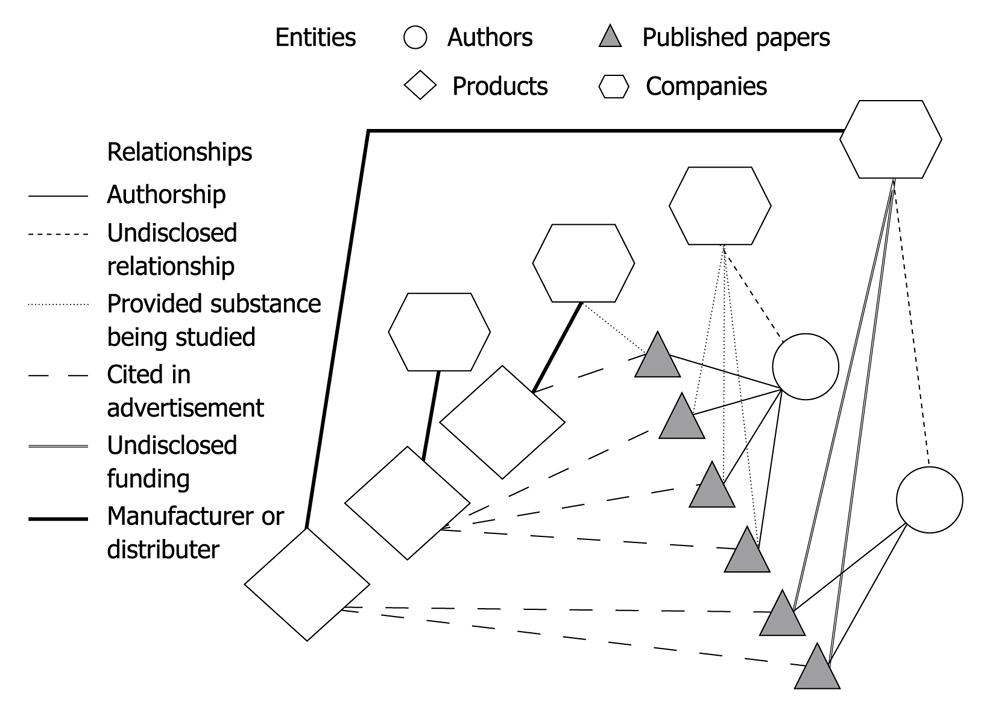 Industry funding does not necessarily denigrate the quality of research, and in many cases is financially necessary to advance scientific understanding. However, undeclared financial conflicts of interest at best reduce face-validity of findings, and at worst represent deception. Financial disclosures that are generally the norm in scientific publications need to be in place in dietary supplement research as well, and should be provided by authors, required by journals, and insisted upon by peer-reviewers. A lack of financial conflicts should be noted by confirmatory statements rather than by omission of conflict declarations. Funding sources should also be noted by reviews of published papers, especially when the reviewed literature contains methodological weaknesses such as small sample size and short duration. When used for marketing, small, short duration pilot studies may have disproportionately large impact, providing false assurance to consumers with low science-literacy that products are “clinically tested” and thus safe and effective. It may also be prudent for regulatory authorities such as the US Federal Trade Commission or Food and Drug Administration to consider how published research is currently used in the marketing of consumer products, especially those with a track record of causing harm.