We reported two cases of liver metastasis with portal vein tumor thrombus that developed after liver transplantation for hepatocellular carcinoma (HCC). Both the patients were women aged 43 and 55 years, who had liver metastasis and portal vein tumor thrombus formation after liver transplantations for HCC. For the treatment of portal vein tumor thrombus, 125I seeds were implanted into the hepatic tissue under the guidance of preoperative computed tomography (CT) images with a total radiation dose of 130 Gy. Enhanced spiral CT scan was performed for evaluation of the liver at 12 and 16 wk after treatment. Thereafter, upper abdominal CT examination was performed every 2-3 mo. No severe complications associated with the 125I seeds were seen in these two patients. The upper abdominal CT images (obtained after 3 and 4 mo of treatment) showed that the thrombosis reactions were complete reaction and restoration of the patency of the partially obstructed portal vein with partial obstruction. In the case with complete obstruction of the portal vein, the thrombosis was resolved completely, but blood flow could not be restored. After this treatment, one of the patients is still alive, while the other died within 6 mo after the treatment due to lung metastasis complicated with lung infection, leading to respiratory failure.

Three-dimensional (3-D) conformal radiotherapy (CRT) is widely used in treatment of HCC with portal vein thrombosis. However, this therapy has the following shortcomings: (1) inaccuracy in locating the lesions due to interference by the respiratory movement; (2) a relatively long treatment duration; and (3) damage to the surrounding tissues[2].

125I seed implantation is a type of brachytherapy. Its safety in the treatment of tumors has been recognized over the world. The emergence of computer-aided 3-D treatment planning system (TPS) and computed tomography (CT)-guided precision positioning system has enhanced the accuracy of particle implantation and reduced the extent of damage to the surrounding normal tissues. Therefore, this therapeutic method has been widely used. However, to date, there has been no published report on 125I seed implantation for the treatment of HCC recurrence with PVTT after liver transplantation.

We herein report two cases in which CT-guided 125I seed implantation was used for the treatment of recurrent liver metastasis with PVTT developed after liver transplantation for HCC. Satisfactory results were found during the follow-up in 1 case after 6 mo and in the other up to the present.

The patient was a 43-year-old Chinese woman who underwent allogenic liver transplantation in the First Affiliated Hospital of China People’s Liberation Army Third Military Medical University on February 17, 2006. On July 5, 2007, the abdominal CT examination revealed the left intrahepatic metastasis of HCC. She was treated with ultrasound-guided radiofrequency twice: one in August and the other in October 2007. On December 18, 2007, upper abdominal contrast-enhanced CT scan showed left intrahepatic metastasis, portal vein occlusion of the left extrahepatic segment, and intrahepatic segment-filling defect (2-cm long) in the portal trunk. α-fetoprotein was 43 010 μg/L. After informed consent was obtained from the patients for the surgery, CT-guided 125I seed implantation was performed on January 4, 2008. An enhanced abdominal CT scan was performed before seed implantation. The 3-D CT images were transferred to the TPS. On the basis of the obtained CT images of lesions, the spatial distribution of implanted seeds was simulated. A combination of preplanning and real-time technique was adopted, and the number and activity of the implanted seeds were calculated. Spiral CT-guided percutaneous manual implantation of the particles was performed (Figure 1). Since the thrombus originated from the left branch of the portal vein and spread to the trunk, there was no significant extension of the thrombus in the left branch of the portal vein. The 125I seed implantation was done in the portal area around the capsules. We implanted 22 seeds (0.8 mCi/seed) with a total radiation dose of 130 Gy (110-140 Gy) to the thrombus. The liver function tests showed elevated levels of serum transaminase for about 1 wk after the treatment, which returned to the level of pre-brachytherapy after liver recovery treatment. Abdominal CT after 3 mo showed the disappearance of the portal vein tumor thrombus and the obvious restoration of the portal vein. Thrombosis reaction was complete reaction (Figure 2). This patient died within 6 mo of treatment because of respiratory failure caused by bilateral pulmonary metastasis complicated with pulmonary infection. 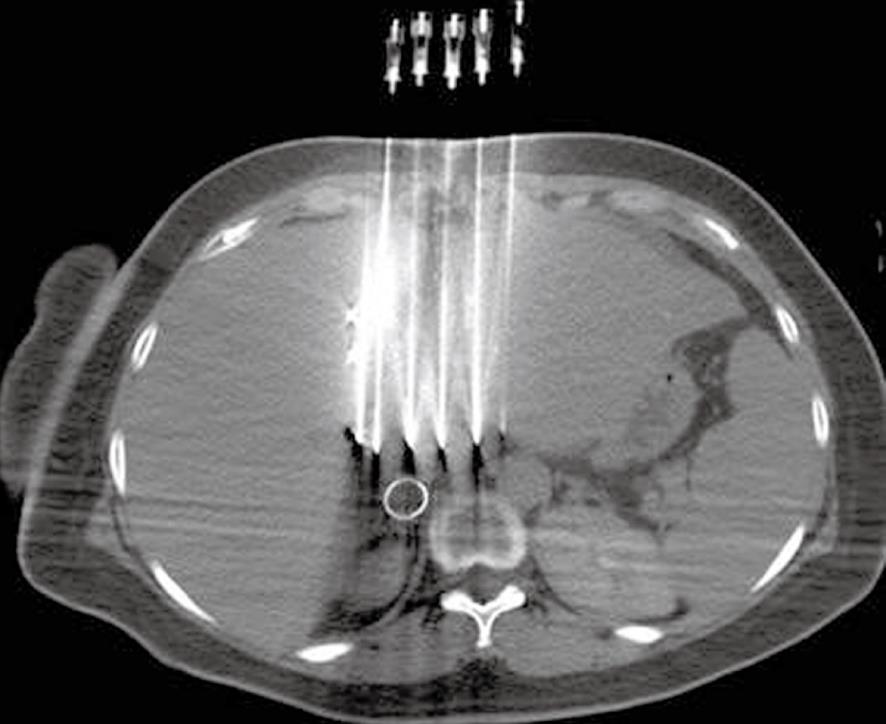 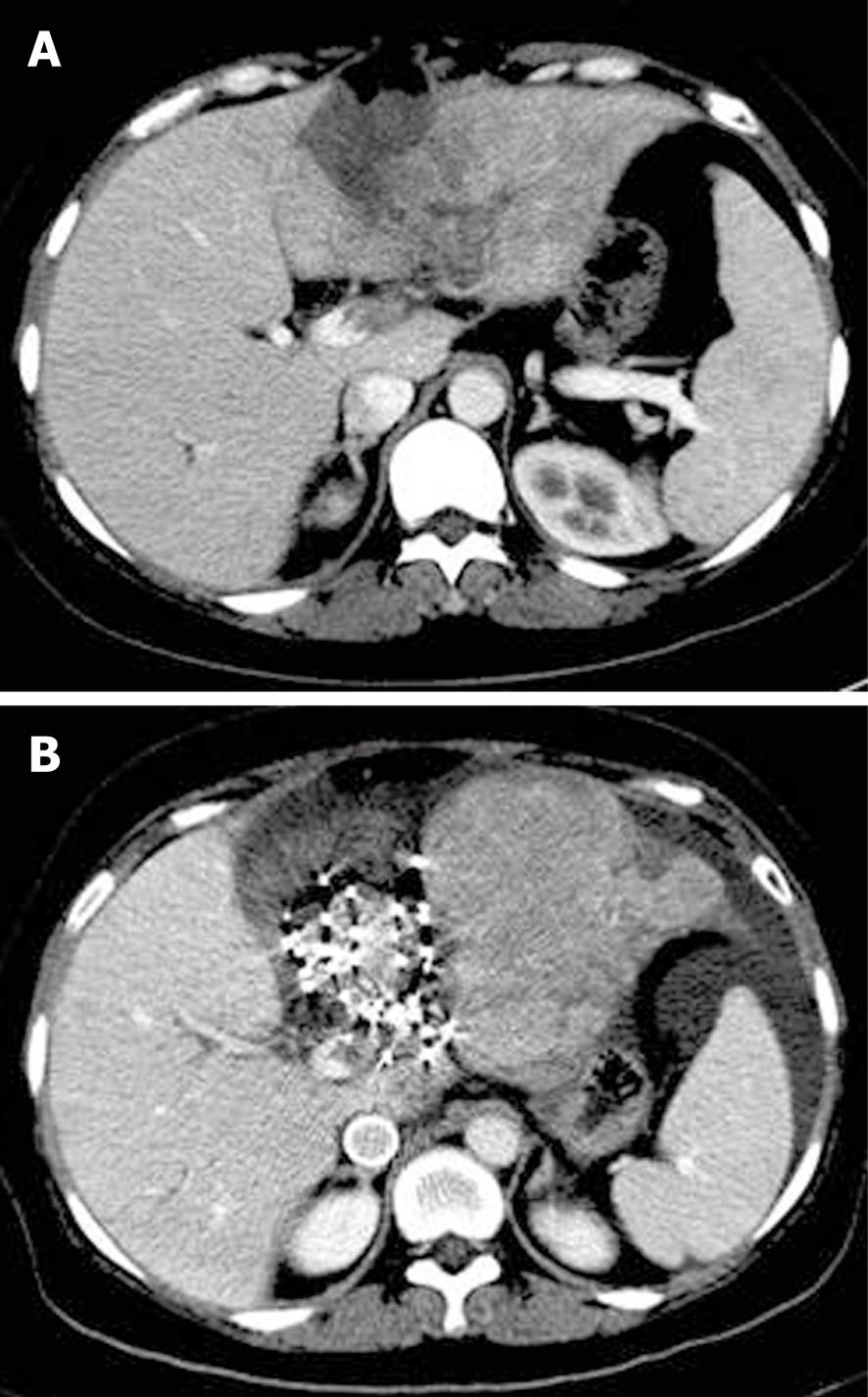 The patient was a 55-year-old Chinese woman, who underwent allogenic liver transplantation for HCC under general anesthesia on May 18, 2006 in the same hospital. On December 26, 2007, dual-modality positron emission tomography/CT examination showed that the upper posterior part of the right liver had abnormal uptake, thereby suggesting HCC metastasis. On January 12, 2008, ultrasound and CT images showed that the posterior branch of the right portal vein tumor thrombus had invaded the portal vein trunk, the length of the tumor thrombus was about 1.5 cm, and the left main trunk had a small embolus. On January 16, 2008, 125I seed implantation was performed. For the thrombus in the right posterior portal branch, the seeds were implanted directly inside; for the left main trunk, they were implanted in the periportal zone about 1 cm away from the portal area. The treatment protocol was the same as that described in the 1st case, and 27 seeds were implanted at a dose of 0.5-0.8 mCi/seed (Figure 3). No postoperative complications associated with the implantation were observed in this patient. Four months after the treatment, upper abdominal CT showed the following findings: (1) the tumor thrombus in the right branch of the portal vein had resolved with only implanted seeds remaining; (2) the patency of the posterior branch of the right portal vein was not completely restored; and (3) the filling defect in the left branch of the portal vein had disappeared (Figure 4). To date, she is still alive. Transient increase in transaminase occurred in the two patients, which decreased to the preoperative levels after 1 wk. Serious complications, such as acute bleeding during seed implantation, hematoma, infection, abdominal pain, bilirubin, seed migration to the lung, were not observed. 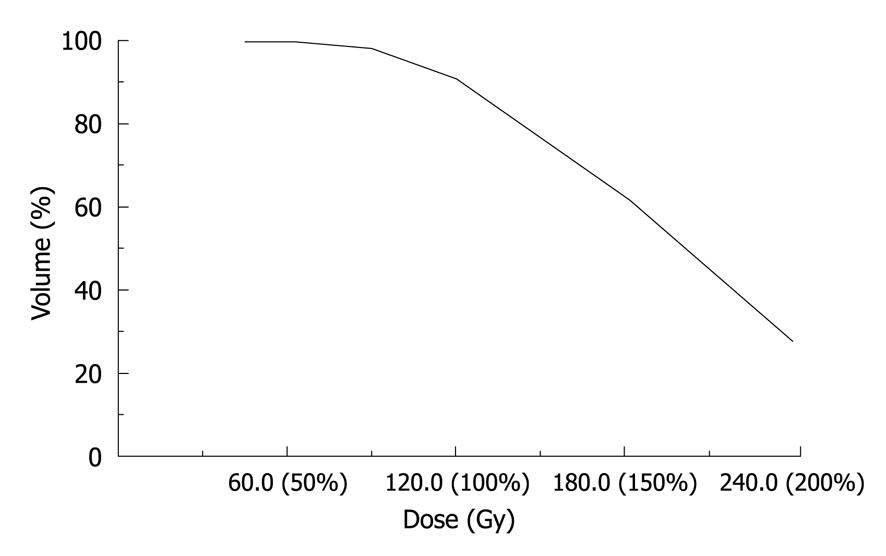 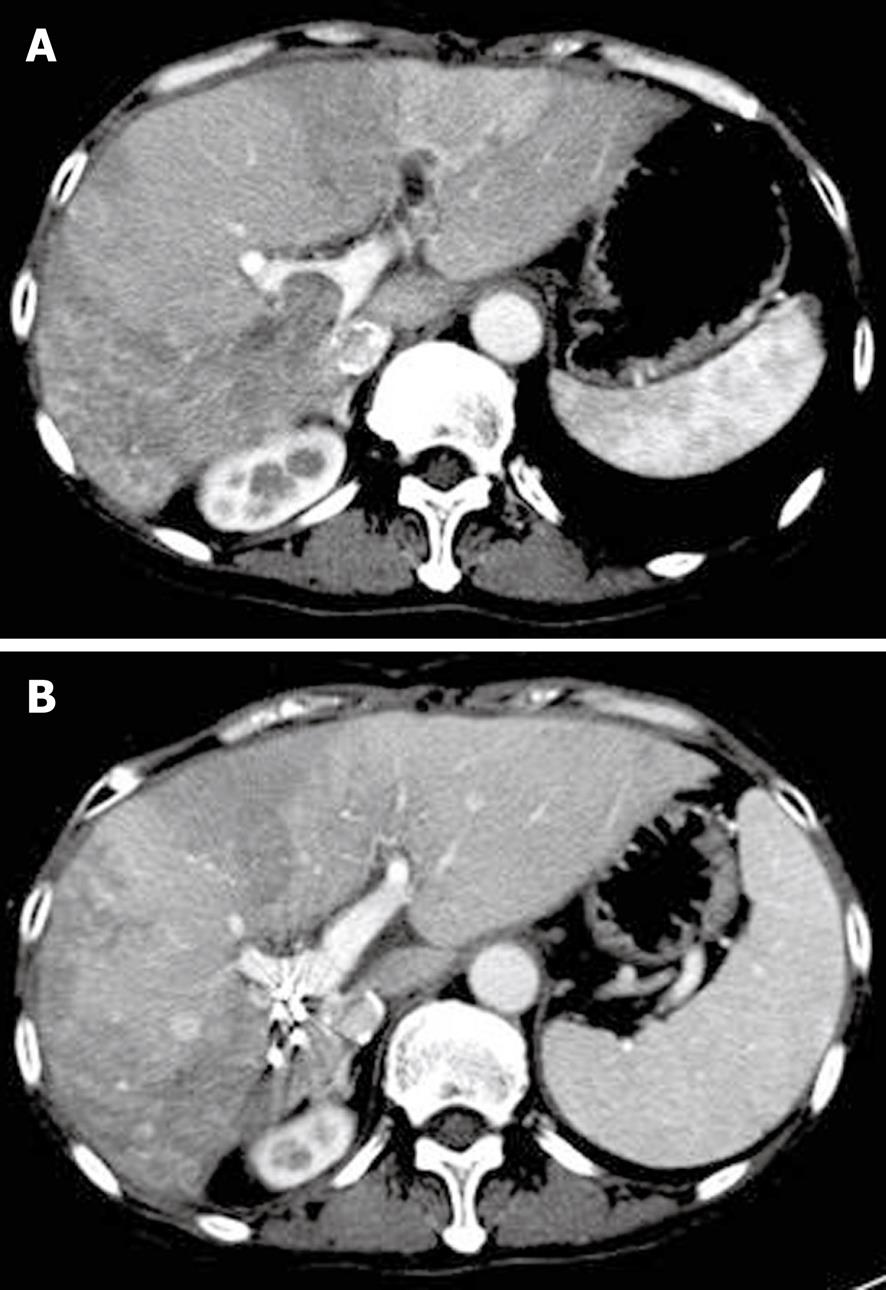 PVTT is a common complication in HCC patients with liver metastasis after liver transplantation. PVTT not only leads to the development of metastatic tumors in the liver, but also is a sign of liver function deterioration. Conventional radiotherapy can be used in the treatment of PVTT. However, the use of this therapy is limited because the liver has a low radiation tolerance. The tolerance dose for the whole liver is 30-35 Gy[3], but this dose is not sufficient to control the growth of HCC. Lawrence et al[4] reported that for lesions in 70%, 50% and 20% of the liver, tolerance doses were 42, 52 and 70 Gy, respectively.

The complication occurrence of 125I seed implantation in liver tumors has been reported to be low. Nag et al[6] reported that in their study of 64 patients treated with 125I seed implantation, only 2 had liver abscesses, but without other complications. Ricke et al[7] reported that among 37 patients with liver cancers and some patients with other cancers treated with CT-guided interstitial radiotherapy, 2 patients had severe complications after the treatment (< 5%). A high dose rate (HDR) was only used in temporary implantation because of its high energy of rays and severe damage to the surrounding tissues. There were serious adverse reactions induced by prolongation of seed implantation with HDR, but complications of permanent implantation with low-active seeds were very light. In PVTT treatment, the postoperative liver function abnormalities were transient and treatment-responsive, with only mild liver dysfunction in most cases. There was no seeds migration to the lung. Seeds were put inside the tumor and outside the vessels rather than inside the vessels.

In conclusion, a combination of 125I seed implantation and other interventional means is a new method to control the HCC metastasis. However, analyses of more cases and further researches on brachytherapy are still required to assess the safety and efficacy of this new method.