AIM: To determine whether the serum level of matrix metalloproteinase-7 (MMP7) has the potential to diagnosis cholangiocarcinoma from benign biliary tract diseases.

METHODS: This study was performed according to the PRoBE (a prospective-specimen-collection, retrospective-blinded-evaluation) design. A total of 187 patients with obstructive jaundice were consecutively enrolled. After the diagnostic status of these patients was ascertained, their levels of serum MMP7 were assayed and compared with serum carbohydrate antigen 19-9 (CA19-9). This was conducted in a blinded case (cholangiocarcinoma)-control (benign biliary tract disease) setup.

Previous studies demonstrated that high expression of matrix metalloproteinase-7 (MMP7) could be readily detected in cholangiocarcinoma specimens[12-14]. We previously performed research to study the serum levels of CA19-9, CEA, MMP9 and MMP7 in patients with obstructive jaundice[6]. This previous study was performed using a case-control design and serum collected from a serum bank. The results showed that only the level of MMP7 was significantly higher in patients with cholangiocarcinoma compared to patients suffering from benign biliary tract disease. In addition, when comparing the areas under the curve of the receiver operating characteristic (ROC) for CEA, CA19-9 and MMP9, a ROC curve analysis demonstrated that the detection of MMP7 in serum was the most accurate for differentiating cholangiocarcinoma from benign biliary tract disease. This finding indicated that serum MMP7 should be used as a tumor marker for the diagnosis of cholangiocarcinoma in patients with obstructive jaundice.

According to the study of biomarker use, it is now widely appreciated that the evaluation of biomarker performance must be separated from biomarker discovery. In discovery research, its performance in samples may be biased in an overoptimistic direction. To estimate performance without bias, an independent dataset should be investigated[15-18]. Therefore, the aim of the present study was to evaluate the performance of serum MMP7 and CA19-9 for their potential in the diagnosis of cholangiocarcinoma. We used a new and independent dataset of prospective consecutive cases with evidence of bile duct obstruction due to various etiologies. This study was performed according to the PRoBE (a prospective-specimen-collection, retrospective-blinded-evaluation) design[15]. We collected serum from a cohort that was representative of the target population (consecutive cases of obstructive jaundice who had undergone ERCP, PTBD or bile duct surgery). After the diagnostic status of these patients was ascertained, the levels of serum MMP7 and CA19-9 were assayed in a fashion that blinded the analysis to a case-control status. In addition, we implemented STARD statements (STAndards for the Reporting of Diagnostic accuracy studies)[16-18] to ensure standardization and transparency of our study.

This study was conducted within the Rajavithi Hospital Surgery Department located in Bangkok, Thailand. The local ethics committee approved the study protocol. Sample size was calculated on the basis of an expected area under the ROC curve of MMP7 serum levels (= 0.70) for the diagnosis of cholangiocarcinoma[6]. Using a significance level of 0.05 (two-sided) and a power of 0.95, a sample of 50 cholangiocarcinoma patients was required for the study[19]. From previous data, the prevalence of cholangiocarcinoma detection in patients with obstructive jaundice treated at our department was shown to be in the range of 27%-30%. Therefore, we prospectively included consecutive patients with symptoms of obstructive jaundice who had undergone ERCP, PTBD or bile duct surgery during the period from June of 2008 to July of 2009. Exclusion criteria included presence of other cancers, age less than 20 years and the presence of severe pulmonary fibrosis[20]. All patients gave written informed consent. The diagnosis of cholangiocarcinoma was carried out using one of the following tests[6]: (1) tissue biopsy; and (2) cytology plus radiological (helical CT scan or MRI) and clinical observation to identify tumor progression at a follow-up of at least two months. Patients with an inconclusive diagnosis were excluded from this study.

Serum collection and the measurement of serum biochemistry

The serum levels of MMP7 were measured using an enzyme-linked immunosorbent assay (ELISA) kit (R&D Systems, Minneapolis, MN, USA), as previously described[6]. Briefly, the diluted serum samples were added in duplicate to 96-well plates coated with MMP7 antibody and then incubated at room temperature for 2 h. After washing, the conjugated secondary antibody was added, and the plate was further incubated for another 2 h. Plates were washed again prior to incubation with the substrate solution for 1 h. Following termination of the reaction with the stop solution (1 N sulfuric acid), the optical density was measured at 490 nm using a spectrophotometric microplate reader. The concentration of MMP7 in each sample was calculated from a standard curve. The scientist examining these serum samples was unaware of the patient’s diagnosis. In addition, the MMP7 test results had no influence on the clinical diagnosis of the patients in the study.

Data are presented as the mean ± SD, unless otherwise mentioned. Comparisons between the quantitative variables were performed using Mann-Whitney U or Student’s t-test, as appropriate. One-way analysis of variance (ANOVA) with multiple comparisons by the Post HOC Scheffe method or Kruskal Wallis test was used to compare each value (MMP7, CA19-9) to the control early and late stage cholangiocarcinoma groups. Qualitative variables were reported as counts, and comparisons between independent groups were performed using Pearson Chi-square tests. Correlations between MMP7 levels and other parameters were examined using the Pearson correlation coefficient. A ROC curve was generated by plotting the sensitivity against 1-specificity, and the area under the curve with 95% confidence intervals (CI) was calculated. The optimal cutoff points for MMP7 were selected based on the ROC curve analysis. Sensitivity, specificity, positive predictive value and negative predictive values were calculated using a 2 × 2 table of the collected data. The data on various blood chemistries and levels of CA19-9 and MMP7 that were significantly different between the control and cholangiocarcinoma groups were analyzed by multiple logistic regression analysis. 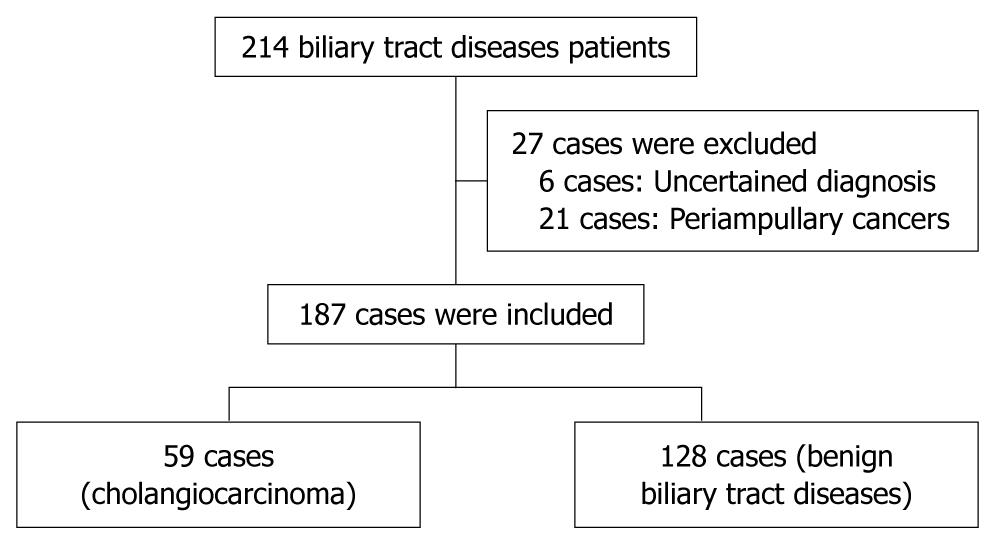 Figure 1 A flow diagram of 187 obstructive jaundice patients who were consecutively enrolled in this study.

As shown in Table 1, no statistically significant differences in gender, age, serum globulin and ALT levels were identified among the data from the control patients when compared to the cholangiocarcinoma patients. However, the level of serum albumin, AST, bilirubin and ALP were significantly higher in cholangiocarcinoma patients than in the control patients (Mann-Whitney U test, P < 0.05). 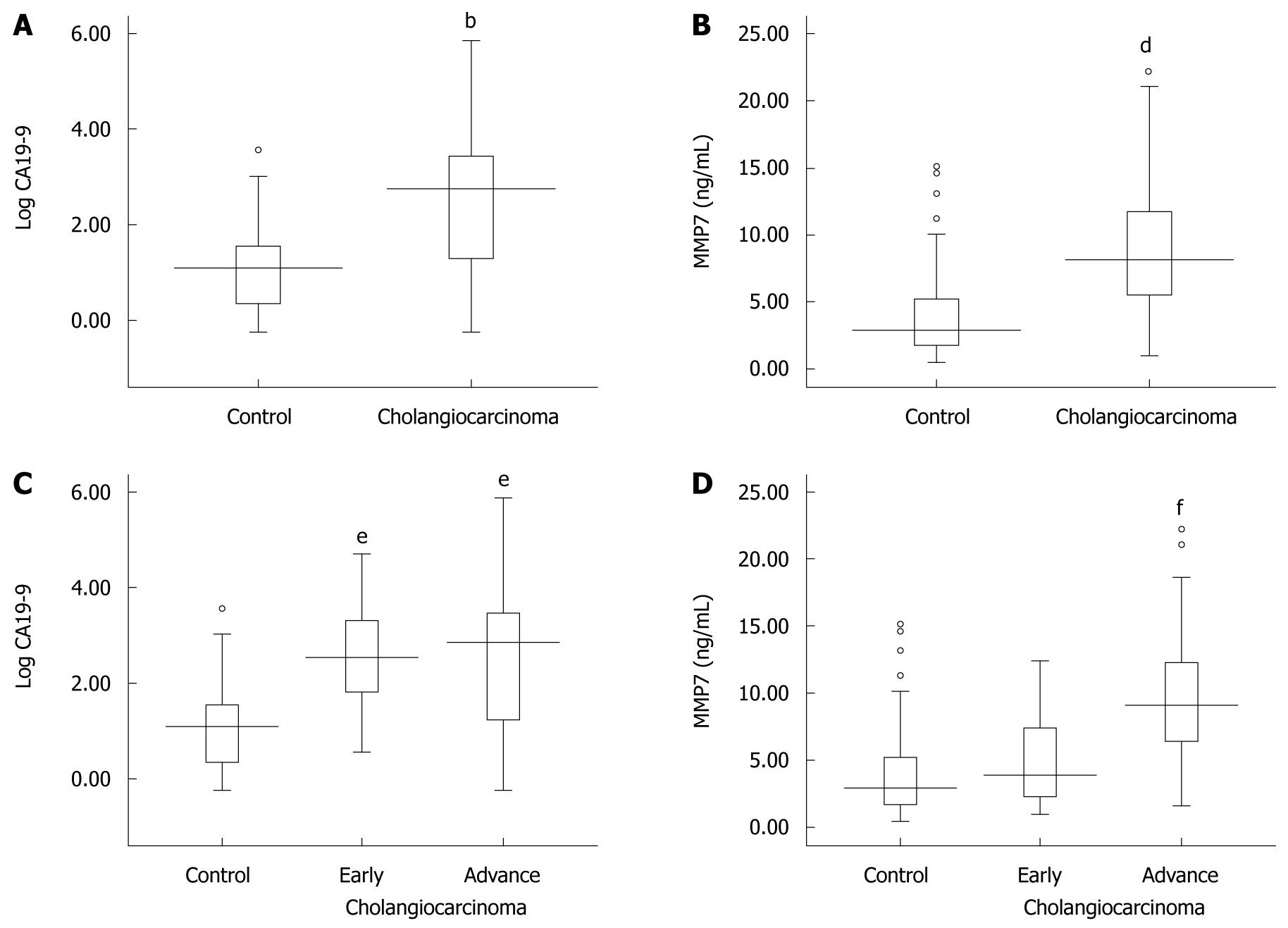 Serum levels of CA19-9 and MMP7 for the diagnosis cholangiocarcinoma

To determine the diagnostic accuracy of serum CA19-9 and MMP7 levels for differentiating cholangiocarcinoma from benign bile duct diseases, a ROC curve analysis was applied to calculate the area under the curve (AUC). These levels were determined to be 0.79 (95% CI: 0.708-0.868) and 0.84 (95% CI: 0.778-0.903) for CA19-9 and MMP7, respectively (Figure 3). The sensitivity, specificity, positive and negative predictive values for selected cut-off points of CA19-9 and MMP7 are presented in Table 2. 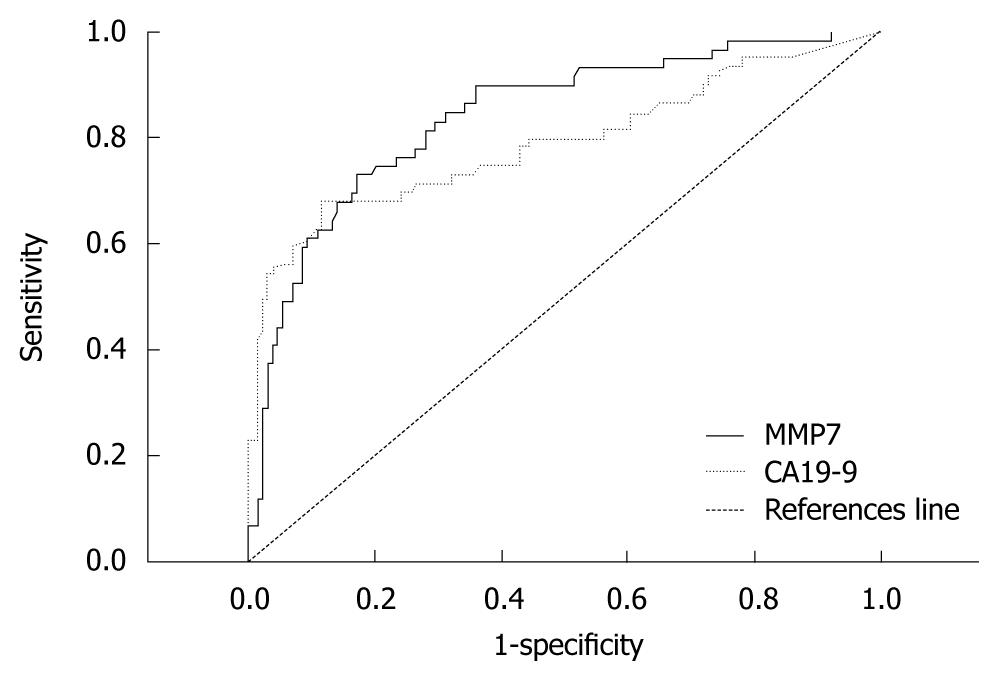 Figure 3 Receiver operating characteristic curve analyses of carbohydrate antigen 19-9 and matrix metalloproteinase-7 for the diagnosis of cholangiocarcinoma. The diagnostic accuracy of each biomarker, in terms of its sensitivity and specificity, are presented by receiver operating characteristic curve analysis. MMP7: Matrix metalloproteinase-7; CA19-9: Carbohydrate antigen 19-9.

Correlation between MMP7, CA19-9 and other blood chemistry

The correlations between the levels of serum albumin, AST, ALT, ALP, total bilirubin, CA19-9, and MMP7 were investigated. As presented in Table 4, the level of serum MMP7 was significantly correlated with serum albumin, AST, ALP, total bilirubin and CA19-9, although none of these parameters had a high Pearson correlation coefficient value (> 0.7). We suggest that the significant correlation of these blood chemistries with serum MMP7 was caused by the high number of samples analyzed in this study.

Evaluation of serum CA19-9 and MMP7 levels for the diagnosis of cholangiocarcinoma: Multiple logistic regression analysis

Previous studies have demonstrated that MMP7 plays a key role in the mechanism of cancer invasion via proteolytic cleavage of the extracellular matrix tissues. It has also been shown to activate other MMPs, such as proMMP-2 and proMMP-9[21], and inhibit E-cadherin function by ectodomain shedding of E-cadherin[22]. The results of several recent studies indicate that MMP7 is over-expressed in a variety of epithelial tumors including those of the esophagus[23], colon[24,25], pancreas[26], and cholangiocarcinoma tumors[12]. In addition, several studies have shown that MMP7 could be detected in the serum of cancer patients, including patients with ovarian[27], colorectal[28] and gastric cancer[29]. This finding suggests that high levels of serum MMP7 are not specific to cholangiocarcinoma. It can be detected in many types of cancer. Therefore, it should be used with other diagnostic modalities (clinical presentation and imaging study) before making a diagnosis.

The values of AUC from the ROC curve for MMP7 and CA19-9 in this study were shown to be much higher than those observed in our previous study[6]. The differences in the designs of these studies should be considered. Our previous study was designed as a retrospective case-control study for diagnostic accuracy. Therefore, some bias from the selection of samples may have occurred. A strength of the present study was the implementation of the strategies of the PRoBE designs to avoid the problems of bias that may affect the studies of the diagnostic test[15]. We collected serum from all obstructive jaundice patients before the diagnosis of cholangiocarcinoma or benign biliary tract diseases was determined. This procedure assured that biases related to differences in sample collection and handling would be avoided[30]. Limitations of this design include the fact that the majority of the study participants were in advanced stages of cholangiocarcinoma. The number of patients with early-stage cholangiocarcinoma was small (n = 11), and this number of patients would not have had the statistical power to detect a difference in mean value between these early stages of cholangiocarcinoma and the control group. Further studies, which should include an increased number of early-stage cholangiocarcinoma cases, need to be carried out before using MMP7 as a screening test for the detection of early stage cholangiocarcinoma. In addition, this study was performed in a referral center, which has a high prevalence of cholangiocarcinoma. As a result, the findings may not be broadly applicable to other hospitals that typically have a low volume of cholangiocarcinoma.

This is the first consecutive prospective study to report that the serum level of MMP7 was significantly higher in patients with cholangiocarcinoma than in those with benign biliary tract obstruction. The authors suggest that the serum level of MMP7 may be a potential tumor marker for differentiating cholangiocarcinoma from benign biliary tract obstruction.

This study may represent a future strategy for diagnosing patients with cholangiocarcinoma by the detection of serum level of MMP7 and CA19-9.

This is a prospective-specimen-collection and retrospective-blinded-evaluation study of 187 patients with obstructive jaundice where a novel serum marker, MMP7, for the diagnosis of cholangiocarcinoma was investigated. In general, it’s a nicely designed and accomplished study with sound conclusion, hopefully of interest for a wide range of readers and researchers.