RESULTS: Forty proteins were differentially expressed in NLN and SLNMM, and 4 metastasis-concerned proteins highly expressed in SLNMM were identified to be hnRNP A1, Ezrin, tubulin β-2C and Annexin A1. Further immunohistochemistry staining of these four proteins showed their clinicopathological characteristics in lymph node metastasis of CRC.

CONCLUSION: Variations of hydrophobic protein expression in NLN and SLNMM of CRC and increased expression of hnRNP A1, Ezrin, tubulin β-2C and Annexin A1 in SLNMM suggest a significantly elevated early CRC metastasis.

At present, colorectal cancer (CRC) is the third most common cause of cancer-related death worldwide[1]. Its incidence in China has increased rapidly during the past few decades[2]. Since CRC metastasis has a great effect on the survival of its patients and selection of its treatment modalities, it is therefore important to understand the molecular basis of metastasis in order to develop better preventive and therapeutic procedures. CRC development is a multi-step process that spans 10-15 years, with different proteins involved in different steps[3], it is thus of great significance to find out the proteins involved in micrometastasis for early detection and treatment of CRC.

Sentinel lymph nodes (SLN) provide the primary lymphatic drainage of a tumor, thus metastatic cancer cells first spread into the lymph nodes. It has been shown that the prognosis of CRC patients is related to sentinel lymph node micrometastasis (SLNMM)[4,5]. SLN techniques, such as SLN biopsy[6-8] and SLN mapping[9-11], have been used in diagnosis of CRC and can better stage CRC than standard HE analysis. Since SLN is the most intensively exposed to bioactive tumor cell products, it is important to know which proteins play a role in micrometastasis. Therefore, detection of differentially expressed proteins in SLNMM is of great significance in understanding the molecular mechanism underlying early CRC metastasis.

Comparative proteome techniques allow the characterization of global alterations in protein expression during cancer development and has been widely used in many kinds of tumors, including CRC[12]. Current studies on proteomics in CRC are mainly focused on comparison between primary CRC foci, normal tissue, and distant metastasis[13-16], or between different tumor cell lines[17,18], but the technology has not yet been used in comparison between SLNMM and normal lymph nodes (NLN). In this study, the technique was used to identify the differentially expressed proteins in SLNMM in order to find out the early metastasis-associated proteins in CRC.

Forty-three cases of moderately differentiated colorectal adenocarcinoma (24 males and 19 females) at the age of 39-80 years (mean ± SD = 51.2 ± 12.6 years), who underwent operation from January 2007 to January 2008, were randomly collected from Department of General Surgery, Second Affiliated Hospital of Nanjing Medical University, China. Endoscopic ultrasonography was carried out 1 d before operation to identify the invasion extent and 0.1% isosulfan blue was injected circumferentially around the neoplasm to mark SLN[19].

A set of lymph nodes were collected during operation and stained with HE and cytokeratin-20 immunohistochemistry (CK-IHC) immediately by two experienced pathologists. Based on HE staining and CK-IHC, the lymph nodes were divided into NLN and SLNMM. All samples were snap frozen in liquid nitrogen and stored at -80°C until further analysis. All patients recruited in this study received neither chemotherapy nor radiotherapy before surgery. Permission for this study was obtained from the Ethics Committee of Second Affiliated Hospital of Nanjing Medical University. All specimens were anonymous and handled according to the ethical and legal standards.

Protein was extracted from 50 mg of frozen tissue by homogenization in lysis buffer containing 4% CHAPS, 2 mol/L thiourea, 7 mol/L urea, 2% NP-40, 1% Triton X-100, 100 mmol/L DTT, 5 mmol/L PMSF, 0.5 mmol/L EDTA, 2% pharmalyte, 1 mg/mL DNase I, 0.25 mg/mL RNase A, and 40 mmol/L tris-HCl, at pH 8.5, and incubated at room temperature for 2 h. The mixture was centrifuged at 40 000 ×g for 1 h at 4°C. The supernatant was saved and stored at -70°C. Supernatants from 10 individual specimens corresponding to each group were pooled to minimize the individual variations, and the protein concentration in each mixed sample was measured with the bicinchoninic acid method using PBS as the standard.

Three hundred micrograms protein of each group was loaded onto a 240 mm linear IPG strip (pH3-10, Amersham Biosciences, Piscataway, NJ) for first-dimensional isoelectric focusing. Protein separation in the second dimension SDS-PAGE (Bio-Rad, Hercules, CA) was carried out on vertical systems, IPG strips were loaded and run on a 125 g/L acrylamide SDS-PAGE gel in electrode buffer (Tris 0.025 mol/L, glycine 0.192 mol/L, SDS 1 g/L, pH8.3). Electrophoresis was performed with a current of 30 mA/gel for 15 min, followed by 60 mA/gel for 4 h. Each sample was subjected to 2D gel electrophoresis three times to avoid procedural errors. After electrophoresis, the gels were stained with silver nitrate and scanned with an Imagescanner (Amersham Biosciences). The software of PD-Quest 7.3.1 (Bio-Rad) was employed for image analysis, including background abstraction, spot intensity calibration, spot detection, and matching.

Differential protein spots selected were excised from 2-DE gels and cut into small pieces, which were destained, reduced and digested with trypsin overnight. Tryptic digests were extracted and analyzed in a matrix assisted laser desorption/ionization-time of flight mass spectrometry-mass spectrometry (MALDI-TOF-MS) (Bruker, Daltonics, Billerica, MA, USA). The resultant MS data were then screened against NCBInr and SWISS-PROT databases using the MASCOT search program (Matrix Science, London, UK; http://www.matrixscience.com). Protein identities were assigned if at least 4 peptide masses were matched within a maximum of 100 ppm error spread across the data set and the candidate agreed with the estimated pI and molecular weight from the 2-DE gel.

Tissue samples were lysed following the method for 2-DE described above. Aliquots of protein extracts (50 mg) were separated on a 12.5% SDS-polyacrylamide gel. Subsequently, the protein was electrophoretically transferred onto a PVDF membrane (Bio-Rad). After blocked with TBS-Tween 20 (TBST) containing 10% skim milk, the membranes were incubated with mouse monoclonal antibodies against mouse hnRNP A1 and tubulin β-2C, and rabbit polyclonal antibodies against mouse Annexin A1 and Ezrin for 1 h, respectively, followed by peroxidase-conjugated goat anti-rabbit or anti-mouse immunoglobulin (Santa Cruz Biotechnology, Santa Cruz, CA, USA) diluted at 1:10 000 in TBST for 1 h. Finally, blots were developed with chemiluminescent reagent (Pierce Biotechnology, Rockford, IL, USA). In order to equal protein loading, blots were re-stained using anti-actin antibody (Santa Cruz Biotechnology) as a control.

RESULTS
Harvesting and identification of SLNMM 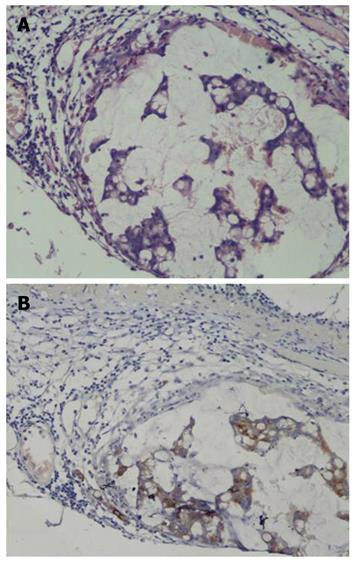 Figure 1 HE staining (A) and cytokeratin-20 immunohistochemistry (B) of sentinel lymph nodes (× 200).
Differential expression of proteome in NLN and SLNMM

Sixty-three protein spots were differentially expressed in NLN and SLNMM (Figure 2). Among the 63 protein spots, some could not be identified with incomplete polypeptide fragments, and some were too low in abundance to obtain useful data. Finally, 40 protein entries were identified by MALDI-TOF-MS analyses (Table 1). The expression was up-regulated and down-regulated in 15 and 25 protein entries, respectively. 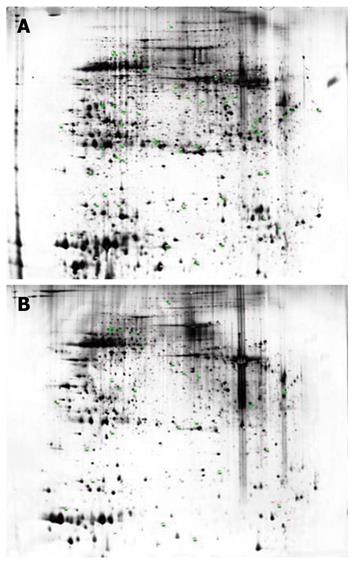 The proteome approach, applied in this study is of clinical importance to identify the differentially expressed proteins in NLN and SLNMM of CRC, since these proteins can be potentially used as tumor markers and anticancer targets.

We marked SLN using isosulfan blue and identified micrometastasis of CRC with HE staining and CK-IHC. The total positive rate was 42.85%, which is consistent with the reported data[20]. A total of 40 proteins were differentially expressed in NLN and SLNMM. Of these 40 proteins, 15 were up-regulated and 25 were down-regulated. The 15 proteins with their expression up-regulation were then divided into 3 groups according to their functions. Western blotting and immunohistochemistry analysis showed that the expression and distribution of 4 metastasis-concerned proteins in NLN and SLNMM were significantly different.

Ezrin, a membrane-cytoskeleton anchor, can affect cell adhesion and regulate tumor cell invasion and metastasis. Wang et al[25] reported that Ezrin expression level is obviously higher in CRC tissue than in normal colorectal mucosa tissue, which is closely related to CRC invasion and metastasis. Elzagheid et al[26] found that intense Ezrin immunoreactivity in cytoplasm can predict poor survival of CRC patients, thus providing clinically valuable information on the biological behavior of CRC. In this study, Ezrin was expressed on cell membrane surface or in cytoplasm, but not uniformly expressed in cytoplasm, which is consistent with the reported findings in pancreatic cancer[27], indicating that membrane translocation of Ezrin may also play an important role in early CRC metastasis.

HnRNP is most abundantly expressed in nuclear protein of mammalian cells, which is associated with pre-mRNA processing and other aspects of mRNA metabolism and transport[29]. As a class of protein family, many of its subtypes are related to the occurrence of different tumors, and hnRNP A2/B1 subtype is now used as an indicator in early diagnosis of lung cancer[30]. In our study, Western blotting and IHC showed the expression level of hnRNP A1 was higher in SLNMM than in NLN, indicating that hnRNP A1 plays an important role in the occurrence and development of CRC[31,32] and can thus be considered a potential molecular indicator/biomarker of tumorigenesis in CRC.

In summary, comparative proteomics technologies can be used in study of protein profiles in NLN and SLNMM and in identification of early CRC metastasis-related proteins. Increased expression of hnRNP A1, Ezrin, tubulin β-2C and Annexin A1 in SLN suggests a significantly elevated incidence of early CRC metastasis. However, further study is needed to verify their role in therapeutic target of CRC.

Tumor metastasis severely affects the prognosis and therapeutic procedures of colorectal cancer (CRC), so early detection of CRC metastasis is of great significance in improving the survival rate of CRC patients. However, no effective protein indicators of early CRC metastasis are available. Sentinel lymph nodes (SLN) provide the primary lymphatic drainage of a tumor, using proteomics approach to the identification of differentially expressed proteins in SLN may be of important significance in early detection of lymph node metastasis of CRC.

Comparative proteome allows the characterization of global alterations in protein expression during cancer development and has been widely used in many kinds of tumors, including CRC. Currently, studies on proteomics in CRC are mainly focused on comparison between primary CRC foci, normal tissue, and distant metastasis, or between different tumor cell lines, but the technology has not yet been used in comparison between SLN and normal lymph nodes (NLN).

Comparative proteomics technologies were used to study the protein profiles of SLN and NLN of CRC, and a number of early CRC metastasis-related proteins were identified.

Increased expression of hnRNP A1, Ezrin, tubulin β-2C and Annexin A1 in SLN suggests a significantly elevated incidence of early CRC metastasis, which may contribute to the diagnosis of CRC and selection of its treatment modalities.

Comparative proteomics technologies were used in this study to identify differentially expressed proteins in SLN, which may be of important significance in detection of early CRC metastasis.