CONCLUSION: HDR-ILBT was found to be effective dose escalation technique in preoperative chemoradiation for rectal cancers, with higher response rates, downstaging and with manageable acute toxicities.

The incidence of rectal cancer in Pakistan is similar to those in other Asian countries, but much lower than in the developed countries. At present, the risk is equal in both sexes. However a 41% rise in incidence was noted in Pakistani males during the period 1995-1999, which may indicate a higher risk in males in the future[1]. Most rectal cancers present at advanced stages, and are not amenable to upfront curative surgery. Recent prospective randomized studies with large sample sizes and long-term follow up have reported that preoperative chemoradiation was superior to postoperative chemoradiation in terms of local control, feasibility and toxicity in patients with locally advanced rectal cancer[2,3].

For patients with ≥ T2 or N+ disease, preoperative chemoradiation is given in two phases; initially external beam radiation therapy (EBRT) is given to cover the pelvic nodes along with the primary tumor followed by a dose escalated boost which is given to the gross tumor volume (GTV) with either EBRT, contact X ray therapy or rarely high-dose-rate intraluminal brachytherapy (HDR-ILBT)[4-6].

We attempted to evaluate the feasibility and safety of HDR-ILBT as a boost during preoperative chemoradiation for locally advanced rectal cancer, and to determine whether HDR-ILBT has an advantage in terms of achieving higher pathologic response rates and sphincter preservation. 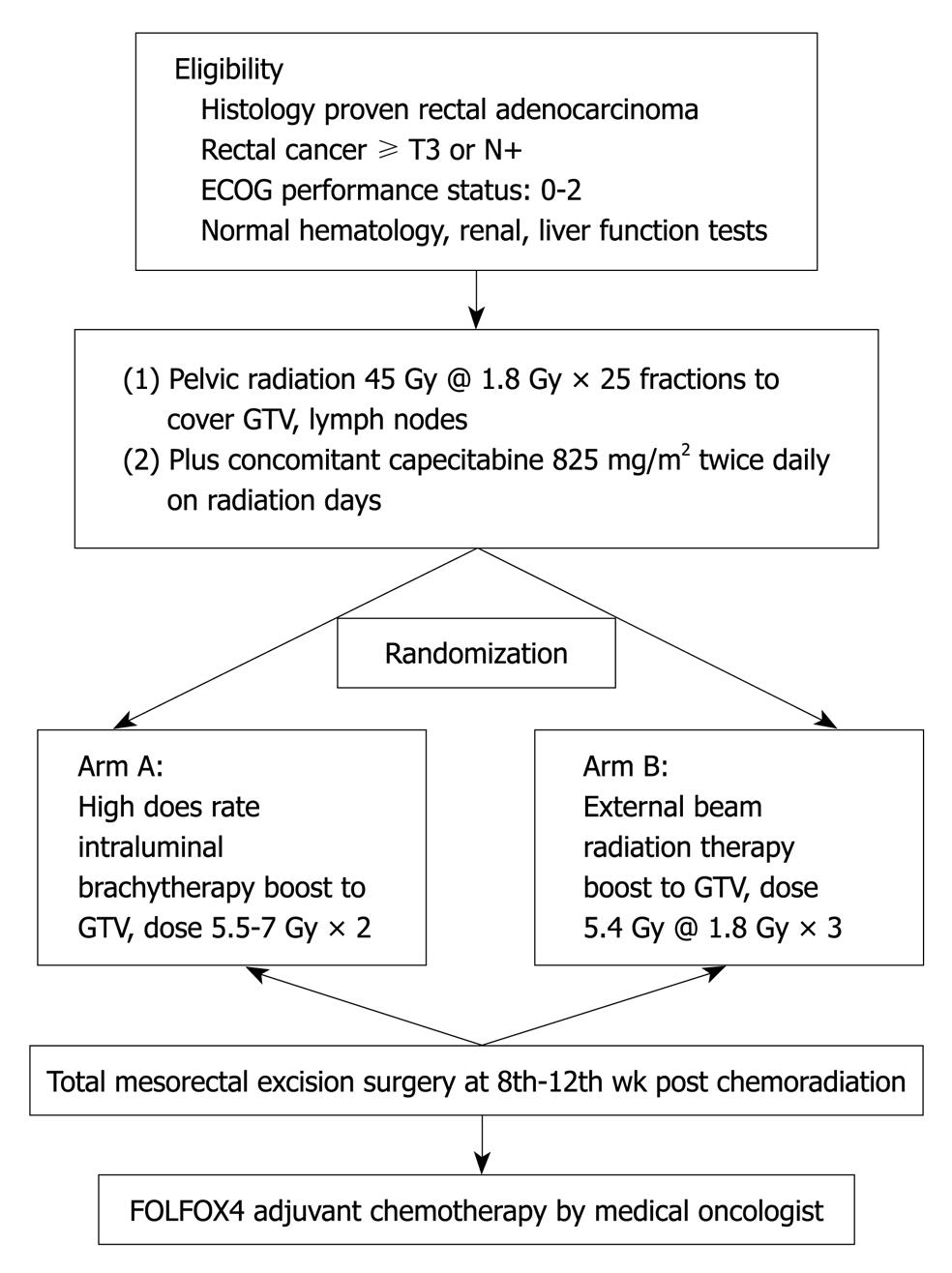 Radiotherapy: Preoperative radiotherapy was delivered using a high-energy multi-leaf collimator linear accelerator (15 MV). All patients were virtually simulated in the prone position using a Siemens® SOMATOM emotions 6 CT scanner, with a device to displace the small bowel (belly board). The whole pelvis was treated with the three field technique and up to 45 Gy in 25 fractions over 5 wk; The superior border was at the L5-S1 interspace, and the lower border was kept at least 3 cm below the tumor. The lateral borders of the anteroposterior-posteroanterior fields were defined 1 cm away from lymph nodes using vessels as surrogate markers (Figure 2). Lateral portals covered the full sacrum and coccyx with a margin; anteriorly they were 3 cm from the sacral promontory. 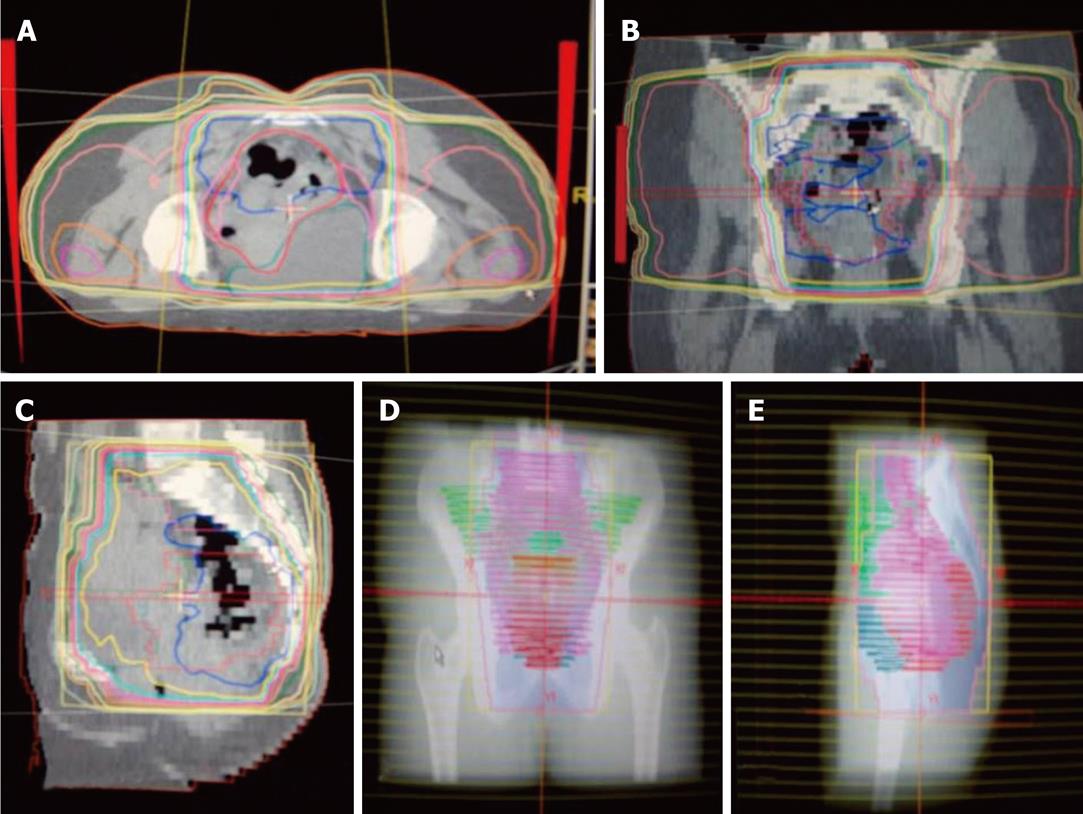 After the nature of HDR-ILBT was fully explained, patients were classified into two groups: group A; boost to GTV with HDR-ILB and group B; boost to GTV with EBRT as the control group, according to their own choice as to whether to receive the therapy. The study was performed with the approval of the institutional ethics committee. Written informed consent was obtained from all patients before treatment.

HDR-ILB technique: HDR brachytherapy was given in two sessions at 20 and 40 Gy of EBRT. In a dedicated room, where the patients were kept in the lithotomy position under analgesia, the oncologist inserted an in-house built rectal catheter after per rectal and endoscopic localization of the gross tumor. Catheter placement was confirmed with plain radiographs of the pelvis taken with a 12 inch C-arm unit (OEC 9800Plus; GE Medical Systems). After the procedure was completed, patients were transported to the CT simulator. 3 mm slice thickness images were obtained and were transferred via digital Imaging and Communications in Medicine to the Flexi-plan brachytherapy planning system version 2.2. All organs (GTV, normal rectum, bladder, prostate, uterus, and vagina) were contoured. The apparatus used for HDR-ILBT was a Flexitron® remote afterloading unit with an iridium-192 (Ir192) stepping source. Dwell positions were activated at 2.5 mm along each needle. Dwell times were optimized using a reverse planning optimization algorithm. The prescribed dose was 5.5-7 Gy at 1 cm of the rectal catheter in each session (Figure 3). 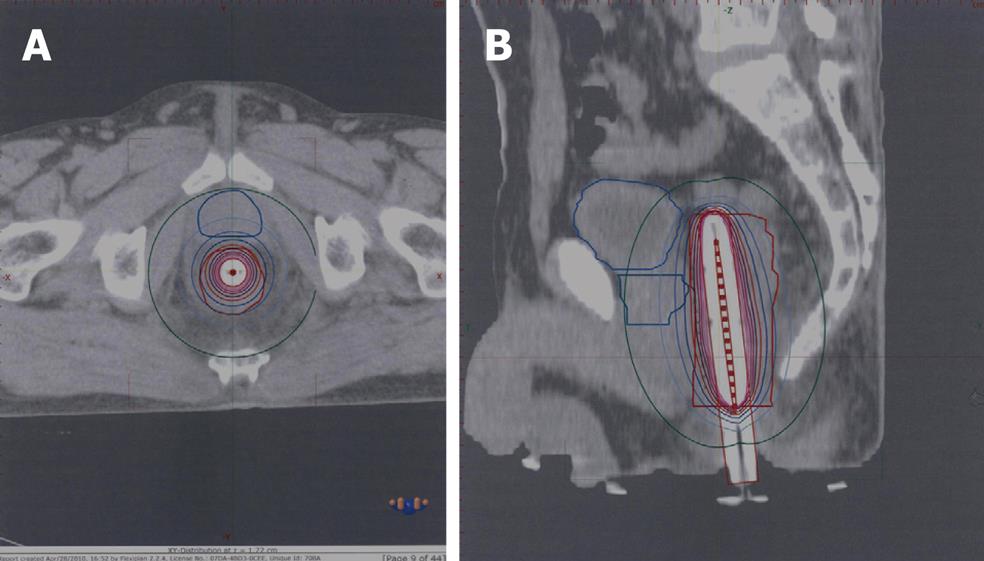 Surgery: After the completion of chemoradiation, patients underwent assessment (repeat CT/MRI, endoscopy, ± exploratory laparoscopy) for surgery at the 8th and 10th wk. The choice of procedure (low anterior resection or abdominoperineal resection) was at the discretion of the surgeon.

Postoperative chemotherapy: The choice of chemotherapy was at the discretion of the medical oncologist.

Following surgery, pathologic tumor staging was determined according to the TNM classification system by the International Union against Cancer and the American Joint Committee on Cancer. Downstaging was applied for T stage and was defined as “yp”, where “y” was after chemoradiation and “p” for postoperative pathologic examination. All resected specimens were evaluated for pathologic response with careful inspection of tumor, mesorectal fat and circumferential margins. The pathologic complete response of T stage (ypT0) was defined as the absence of cancer cells in resected specimens.

Toxicity profile: Adverse events were graded according to National Cancer Institute Common Toxicity Criteria version 2.0 and were recorded weekly during follow up. Hematology and serum chemistry was checked on a weekly basis and after completion of chemoradiation at 4 and 8 wk.

Pathologic complete response of T stage (yp T0) was considered a binary variable and was scored as 0 or 1 based on the presence of tumor cells. This study design was planned using Simon’s optimal two-stage design[12]. According to this design, in the first stage to document ≥ 2 ypT0, 19 patients were required, otherwise the study would be closed prematurely. The descriptive data (mean, median, range and frequency) were calculated using SPSS version 16.0. The response rates and toxicities were summarized with 95% CI. Comparisons between the two groups were performed with paired-sample t tests for metric data and chi-square tests for frequencies. For all tests, a P value less than 0.05 was considered statistically significant.

A total of 36 patients were considered eligible for the study. Patient characteristics in each treatment group are described in Table 1. There were no differences between the two groups with regard to mean age, gender, baseline TNM stage, site of primary tumor and performance scale. The study population was predominantly young males and the majority of patients had tumor grade T3N+.

A total of 34 procedures were successfully performed, with a technical success rate of 98.0%. The total dose in these 17 patients was 11-14 Gy (dose given each session was 5.5-7 Gy). The procedure was well tolerated with the exception of one patient who developed per rectal bleeding within 2 h of the procedure. The bleeding was stopped after securing hemostasis without the need for blood transfusion.

All 19 patients tolerated EBRT very well with a success rate of 100%. Grade 3 nausea and vomiting was seen in 5 patients (26.3%), which was significantly higher than the HDR-ILBT group (17.6%) with a P value of 0.02. However, grade 3 diarrhea and rectal pain were less common when compared with the HDR-ILBT arm. Wound complications were slightly higher (15.8%) in this group when compared with the HDR-ILBR group (11.8%).

High dose rate intraluminal brachytherapy is a well-known treatment modality for gynecologic, esophagus, lung, biliary tract, and nasopharyngeal malignancies[13-17]. The major advantage of HDR-ILBT over external beam irradiation is its rapid fall-off; a high dose can be delivered to the tumor without significantly affecting the adjacent normal tissues.

HDR-ILBT for advanced or inoperable tumors of the rectum has been used both palliatively and to dose escalate after chemoradiation for curative treatment[18]. For palliative relief, recurrent or inoperable rectal cancers, HDR-ILBT has been used worldwide[19-21], however, there is limited data available regarding the use of HDR-ILBT as a boost to GTV along with EBRT during preoperative chemoradiation for rectal cancers (Table 4). Our study showed higher sphincter preservation rates than in all the trials published so far and comparable ypT0 rates. Better pathological response following HDR-ILBT can easily be explained by higher radiation doses to tumor and shorter distances between the radiation source and tumor. One criticism which may arise is that no difference in radiological response was observed between the two groups. Looking at the differences in pathological response, we believe that radiation-induced trauma and fibrosis might be responsible for no radiological response being observed. In the HDR-ILBT arm, a higher incidence of grade 3 rectal toxicity was seen, especially rectal pain followed by diarrhea. We saw only one case with per rectal bleeding which was successfully managed. However, late toxicities were mild and manageable. In addition, more nausea and vomiting and wound complications in the control arm (EBRT) can be explained by greater irradiated bowel, skin and subcutaneous volumes by external beam irradiation.

Our study had a few limitations; first, the primary endpoint was limited to pathologic response rate and the toxicity profile. This study did not determine the survival benefit at the time of analysis, however, further follow up of these patients will show the impact of HDR-ILBT on disease outcome. Our sample size was small, with more advanced unresectable stages and capecitabine was given as a radiosensitizer only during radiation days, rather than continuously[25]. The smaller sample size is justified by poor referral to tertiary care centers, lack of multidisciplinary approaches and lack of patient education especially in developing countries[26]. In our study, we used a single channel catheter with interchangeable shields, which gave better dose homogeneity in the tumor volume and minimal dose to normal rectal mucosa. This type of catheter has been proved to achieve better dose homogeneity as compared to multi-channel catheters[27]. Another finding was that the study population was composed of predominantly young males. One potential cause of the higher incidence of rectal cancer in the Indo-Pak region could be the number of inter-cousin marriages in this region. However, further research by epidemiologists, oncologists and geneticists is required.

In conclusion, the results of our single center experience were similar or better than previously published studies, albeit with higher but manageable gastrointestinal toxicities. High dose rate intraluminal brachytherapy was found to be more convenient, had satisfactory response rates and can be safely used as a tool to boost the gross tumor volume during preoperative chemoradiation. However, a multicenter randomized trial is warranted to evaluate long-term local control and survival benefit.

Preoperative chemoradiation is now the standard of care for locally advanced rectal cancers. Radiotherapy in these patients is given by external beam radiation therapy through the shrinking field technique, initially targeting the primary tumor and lymph nodes followed by a boost to the gross residual tumor. High dose rate intraluminal brachytherapy (HDR-ILBT) has been incorporated at various centers to treat recurrent and persistant rectal cancer. This is the first randomized controlled study in which intraluminal brachytherapy was given as a boost along with external beam radiation.

Intraluminal (intra = inside, luminal = lumen), brachytherapy (brachium = hand, therapy = treatment) is a type of radiation therapy in which the radiation is given by introducing a radioactive source into the lumen, e.g. cervix, bowels, trachea, biliary tract or rectum.

The aim of the present study was to determine whether HDR-ILBT as boost during preoperative chemoradiation for advanced rectal cancer is feasible, safe as well as offer higher pathologic response rates and sphincter preservation.