A 72-year-old male gastric cancer patient with outlet obstruction underwent laparoscopic exploration. The examination disclosed intraperitoneal free cancer cells with no overt peritoneal, lymphatic, or hepatic metastasis. The patient underwent laparoscopy-assisted gastrojejunostomy (LAGJ) and started chemotherapy with S-1 plus cisplatin on postoperative day 13. Three course of the chemotherapy shrank the tumor markedly. Then, the patient underwent gastrectomy with a curative intent. Laparotomy revealed no intraperitoneal free cancer cells, and microscopically complete resection was achieved. The patient received S-1 chemotherapy as postoperative adjuvant treatment for 1 year, and is still alive with no evidence of peritoneal recurrence. LAGJ followed by S-1 plus cisplatin is one of the optional treatments that should be considered for patients with outlet obstruction as it may widen opportunities for potentially curative resection.

In gastric cancer, intraperitoneal free cancer cells, described as CY1 in the Japanese Classification of Gastric Carcinoma (JCGC), 2nd English Edition, are one of the incurable factors[1]. The term “CY1” means histologically remnant tumors and gastric cancer with CY1 is diagnosed as stage IV and associated with poor prognosis. It has been reported that the survival time of gastric cancer patients with CY1 but not with overt peritoneal and other incurable metastases (P0CY1) is almost the same as that of patients with gross peritoneal metastases[2]. However, several reports have revealed that S-1, an oral agent consisting of tegafur, gimeracil, and oteracil potassium at a molar ratio 1:0.4:1[3], might improve prognosis in gastric cancer patients with P0CY1[4,5]. Furthermore, the recent phase III clinical trial named SPIRITS trial demonstrated that S-1 plus cisplatin prolongs the survival time of patients with advanced or recurrent gastric cancer compared to S-1 alone[6].

To solve such a practical problem, we have devised a pioneering therapeutic strategy to facilitate early induction and reliable continuation of S-1 plus cisplatin as an induction treatment for GCOO patients with P0CY1. The strategy consists of two steps. The first step is laparoscopy-assisted gastrojejunostomy (LAGJ) to allow the patient to ingest food and induce chemotherapy with S-1 plus cisplatin, the second step is gastrectomy for complete resection of the tumor and postoperative chemotherapy using S-1 alone.

Here, we present a successfully treated patient with incurable GCOO under our new therapeutic strategy.

A 72-year-old male suffering from GCOO was referred to our hospital. A gastrografin meal study revealed a type 3 tumor existing at the gastric antrum and causing gastric outlet obstruction (Figure 1A). Abdominal computed tomography scan showed neither lymph node metastasis nor distant metastasis (Figure 1B). Laboratory tests revealed that all the data were within normal limits. 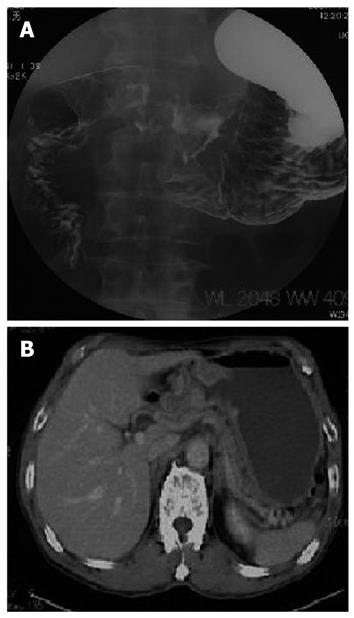 Figure 1 Gastrografin meal study revealing a tumor with ulceration at the gastric antrum, causing gastric outlet obstruction (A), and abdominal computed tomography scan showing remarkable thickness of gastric wall with no evidence of direct invasion to the pancreas head, and lymph node metastasis or distant metastasis (B).

Considering the high possibility of existing peritoneal metastases, we conducted laparoscopic exploration. Laparoscopic examination disclosed P0CY1, and we decided to conduct our new therapeutic strategy for GCOO with P0CY1. Laparoscopic examination was immediately converted into LAGJ with the intention of early induction of chemotherapy with S-1 plus cisplatin and the subsequent radical surgery was planned, that would enable potentially curable resection. The LAGJ was made in a Roux-en Y fashion in an antecolic manner (Figure 2A). We partitioned the stomach using a linear stapler, creating a small tunnel at the lesser curvature. Anastomosis was made between the distal stump of the proximal stomach and the jejunum. We located the partition at the upper part of the stomach, with the intent that cutting the tunnel would be a single procedure in reconstruction of the next surgery to be performed after chemotherapy (Figure 2B). The patient recovered swiftly and chemotherapy with S-1 plus cisplatin was started on postoperative day 13. The daily dose of S-1 was 120 mg/body (3 wk on and 2 wk off). Cisplatin (90 mg/body) was given intravenously on day 8 of S-1 administration. The patient received 3 cycles of the chemotherapy at the outpatient clinic without significant adverse events.

Figure 2 Laparoscopy-assisted partitioning gastrojejunostomy conducted in a Roux-en Y fashion in an antecolic manner (A), cutting the tunnel as a single procedure in reconstruction of the second surgery after chemotherapy (B), and the completely excised tumor with distal gastrectomy and D2 lymph node dissection (C).

After 3 courses of the chemotherapy, examination revealed that the tumor shrank markedly although the gastric outlet obstruction still remained. The patient underwent laparotomy with a curative intent. Surgical exploration revealed that there was no metastasis to the peritoneum or the liver, and lavage cytology was negative. The tumor was excised with distal gastrectomy and D2 lymph node dissection (Figure 2C). Reconstruction was not necessary because we could retain the proximal gastrojejunostomy as a reconstruction route, which was previously made at the LAGJ.

Grossly, the resected specimen had a shallow depressed lesion at the antrum, which appeared to be only fibrosis (Figure 3). Histopathological examination revealed that the fibrotic change generated from the chemotherapy extended widely and live cancer cells were found throughout the whole gastric wall. Out of the 34 dissected lymph nodes, cancer metastasis was found in a single lymph node at station No. 7. The gastric cancer was finally diagnosed as T3, N2, H0, P0, CY0, M0, stage IIIB, based on the JCGC, 2nd English Edition. 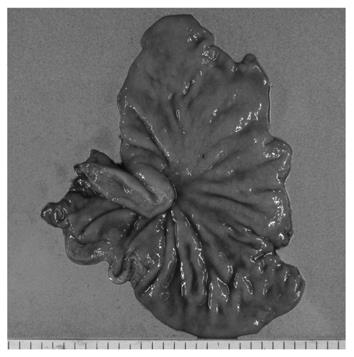 Figure 3 Resected specimen showing a grossly shallow depressed lesion as only fibrosis at the antrum with live cancer cells found in the fibrotic tissue throughout the whole gastric wall at histopathological examination.

The patient was discharged on postoperative day 8 and underwent subsequent postoperative chemotherapy with S-1 alone for 12 mo. The patient is still alive and shows no evidence of peritoneal recurrence 20 mo after the initial surgery.

We presented a treated patient suffering from unresectable GCOO. The patient was treated with our new therapeutic strategy for GCOO with P0CY1. He underwent LAGJ and was induced swiftly to chemotherapy with S-1 plus cisplatin as an induction treatment, followed by potentially curative gastrectomy. We reported the present case because we believe in its importance in devising a novel therapeutic strategy for GCOO with P0CY1.

In Japan, it is considered important to facilitate immediate induction and reliable continuation of S-1-based chemotherapy for the treatment of unresectable and recurrent gastric cancer. In particular, S-1 plus cisplatin, demonstrating a response rate (RR) of 54% and a median survival time (MST) of 13 mo in the SPIRITS trial[6], is recommended as the first-line chemotherapy. Recent clinical trials in other countries, such as the V325 study and the REAL-2 trial, demonstrated that RRs of docetaxel, cisplatin, and 5-fluorouracil (DCF) and epirubicin, oxaliplatin, and capecitabine (EOX) are 37.5% and 47.9%, MSTs of DCF and EOX are 9.2 and 11.2 mo, respectively[8,9]. S-1 plus cisplatin is more favorable than the other regimens tested in Western countries, and is the first choice of treatment for unresectable and recurrent gastric cancer in Japan.

In the present case, we chose S-1 plus cisplatin as the induction treatment for gastric cancer with P0CY1, and CY1 were eventually eliminated. CY1 are one of the most chemosensitive lesions among the metastases. Nakagawa et al[13] revealed that 61% of patients who receive preoperative chemotherapy have no free cancer cells at the time of the second surgery. Satoh et al[14] reported that CY1 observed by staging laparoscopy can be eliminated by preoperative chemotherapy with S-1 plus cisplatin in 7 of 10 patients. Based on these favorable data, we intended to perform curative gastrectomy for the present patient and were actually able to do so. However, whether this result contributes to survival benefits is unclear. Satoh et al[14] also described that 4 of 7 responders to preoperative chemotherapy for CY1 remain free from peritoneal metastasis. Our patient presented with no signs of peritoneal recurrence even though he initially had stage IV gastric cancer. However, whether the therapeutic strategy adopted in the present case truly provides survival benefits or not, needs a longer follow-up of the patient.

In conclusion, LAGJ, followed by induction chemotherapy with S-1 plus cisplatin and subsequent gastrectomy with curative intent, is one of the relevant strategies for GCOO with P0CY1.