Poorly differentiated endocrine carcinoma (PDEC) of the pancreas is a rare and aggressive tumor. First-line treatment is commonly a combination of etoposide and cisplatin, but there is no consensus regarding further treatment recommendations. In this report, we describe a case of pancreatic PDEC treated with gemcitabine as third-line chemotherapy. A 62-year-old man with pancreatic PDEC was administered etoposide plus cisplatin as first-line treatment; he then received irinotecan for tumor relapse. However, because irinotecan induced ileus in this patient, we chose gemcitabine as third-line chemotherapy. After two cycles of gemcitabine (1000 mg/m2 on days 1, 8 and 15 every 4 wk), a partial tumor response was noted by computed tomography (approximately 68% reduction in tumor size). Our patient survived for 15 mo after diagnosis. This is a rare case of unresectable pancreatic PDEC, which showed a partial response to gemcitabine after the failure of two other regimens. Gemcitabine could be an effective treatment option for pancreatic PDEC that is resistant to other treatments.

Pancreatic endocrine tumors (PETs) are rare neoplasms with an annual incidence of less than 1 per 100 000 people[1-6]. These tumors account for less than 1%-2% of all pancreatic neoplasms[1,7]. Poorly differentiated endocrine carcinoma (PDEC) of the pancreas is characterized by aggressive tumor biology and poor prognosis. The biological behavior of PDEC is similar to that of small-cell lung cancer (SCLC), and metastatic pancreatic PDECs are often treated with the chemotherapy regimens that are used to treat SCLC. The combination of etoposide and cisplatin has been widely used to treat pancreatic PDEC because no promising chemotherapy regimens have been reported for this disease. Effective second- or later-line chemotherapy is still uncertain. Gemcitabine is an active agent against untreated and recurrent SCLC. In this report, we describe a case of pancreatic PDEC treated with gemcitabine as third-line chemotherapy.

A 62-year-old man with Crohn’s disease had previously received treatment at a different hospital. In July 2007, his serum carcinoembryonic antigen (CEA) level was found to be elevated. A contrast-enhanced computed tomography (CT) scan of the patient’s abdomen showed a tumor in the head of the pancreas and enlarged para-aortic lymph nodes. In September 2007, he underwent exploratory laparotomy, during which peritoneal dissemination was observed, and hence, a biopsy of the para-aortic lymph nodes was conducted. Based on the histological findings, small cell carcinoma of the pancreas was diagnosed.

Because the tumor was unresectable at the time of diagnosis, the patient was treated with a combination of etoposide and cisplatin as first-line chemotherapy in October 2007. The chemotherapeutic response was deemed to be partial, until multiple bone metastases to the skull, vertebrae, and pelvis were detected using CT after five cycles of chemotherapy. The patient was next administered irinotecan monotherapy as second-line chemotherapy, which started in March 2008. Irinotecan was stopped after one cycle because ileus occurred. He was referred to our hospital for further treatment in July 2008.

The patient had no family history of cancer, and the results of a physical examination were unremarkable. The laboratory findings were hemoglobin 11.5 g/dL (normal 14.0-17.0 g/dL), γ-glutamyl transpeptidase 113 IU/L (normal, 10-47 IU/L), glucose 136 mg/dL (normal, 69-104 mg/dL), CEA 12.8 ng/mL (normal, < 4.0 ng/mL), carbohydrate antigen 19-9 14 U/mL (normal, < 37 U/mL), neuron-specific enolase (NSE) 36.2 ng/mL (normal, < 10.0 ng/mL), and pro-gastrin-releasing peptide (pro-GRP) 338 pg/mL (normal, < 46 pg/mL). A contrast-enhanced CT scan of his abdomen revealed a low-density mass, 7.5 cm in diameter, in the head of the pancreas, as well as enlarged para-aortic lymph nodes at the time of admission. The pancreatic tumor did not show contrast enhancement (Figure 1A). A CT scan of his chest did not show any primary or metastatic pulmonary tumors. We reviewed an excised biopsy specimen of a para-aortic lymph node obtained at the previous hospital. Histological examination of the specimen showed small to intermediate-sized cells with a high nuclear-cytoplasmic ratio and frequent mitosis, and partial necrosis. Immunohistochemical staining revealed that these cells were strongly positive for NSE, CD56, and keratin; weakly positive for chromogranin A; and negative for vimentin, leukocyte common antigen, S-100, and CD99 (Figure 2). On the basis of the pathological findings, the para-aortic lymphadenopathy was determined to be caused by metastasis of PDEC. Therefore, pancreatic PDEC with para-aortic lymph nodes and bone metastases was diagnosed. 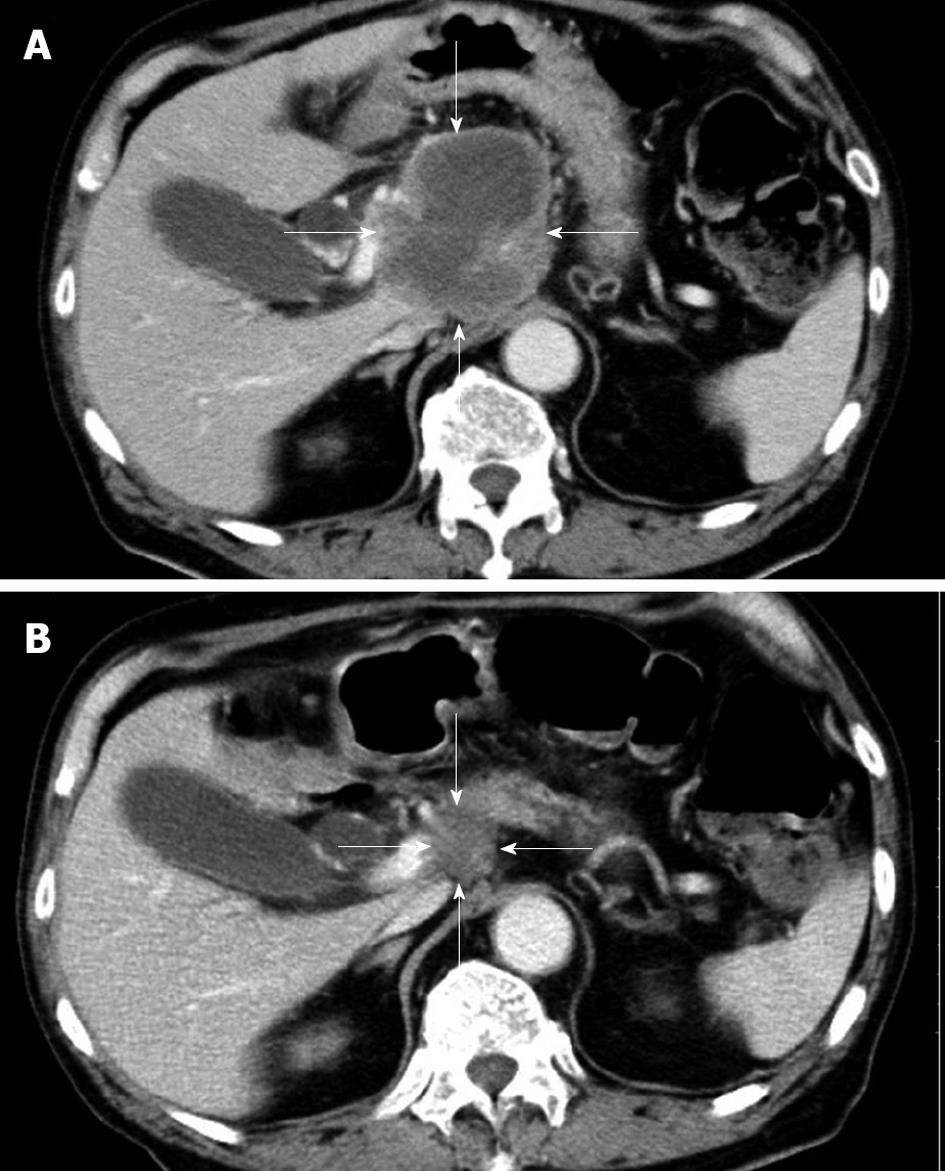 Figure 1 Contrast-enhanced computed tomography scan of the abdomen. A: There was a low-density mass, 7.5 cm in diameter, in the head of the pancreas at the time of admission. The pancreatic tumor (arrows) did not show contrast enhancement; B: A follow-up computed tomography scan showed that the pancreatic mass had reduced to 2.0 cm in diameter. The tumor (arrows) had markedly regressed 4 mo after starting chemotherapy with gemcitabine. 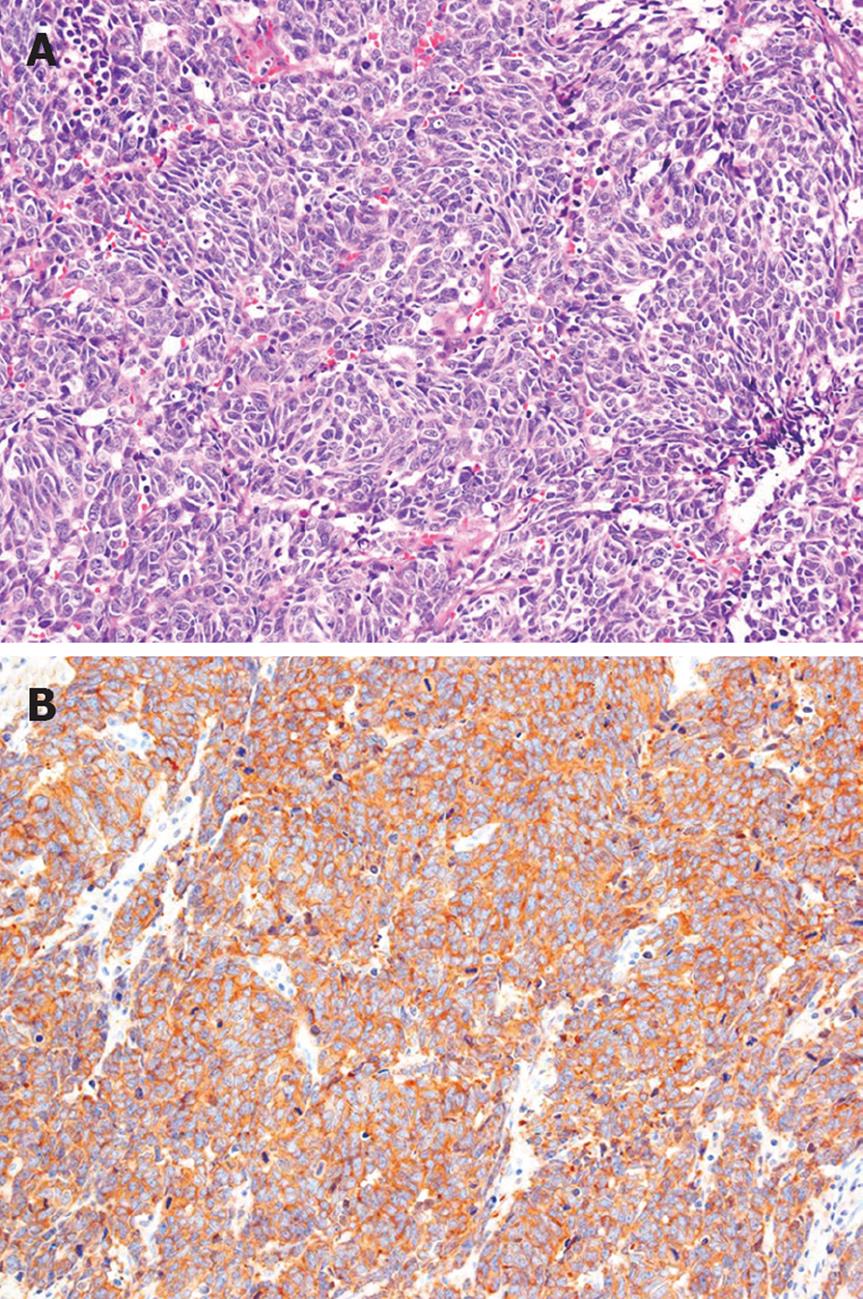 We chose gemcitabine as third-line chemotherapy. Starting in July 2008, the patient received 1000 mg/m2 gemcitabine on days l, 8 and 15 every 4 wk.

After two cycles of gemcitabine, a CT scan of his abdomen showed regression of the pancreatic tumor (from 7.5 cm to 2.4 cm in diameter), and his serum NSE and pro-GRP levels had decreased to within the normal range. The chemotherapeutic response was deemed to be a partial response. After four cycles of gemcitabine, an abdominal CT scan showed a pancreatic mass that was 2.0 cm in diameter (Figure 1B). In November 2008, after day 15 of the fifth cycle, the patient requested that the therapy be stopped because of general fatigue. He died of multiple organ failure in December 2008.

Pancreatic PDEC is a rare neoplasm. Recently, Bettini et al[8] have reported that PDEC was diagnosed in 17 (9.4%) of 180 patients with non-functioning pancreatic endocrine tumors. PDEC is characterized by aggressive tumor biology and poor prognosis. Bettini et al[8] also have reported that all patients with PDEC died within 3.5 years after diagnosis (median, 11.8 mo), and that only 23.5% of the tumors were resectable at the time of diagnosis. Our patient survived for 15 mo after diagnosis. His survival time was longer than the median survival time that was reported by Bettini et al[8].

The standard treatment for advanced pancreatic PDEC has not yet been established. The initial approach to treatment of pancreatic PDEC is to attempt curative resection. However, liver and lymph node metastases are present in 32.5% and 59.5% of patients at the time of diagnosis[9]. Therefore, curative surgical resection cannot be achieved in most patients, and effective medical treatment to control metastatic lesions is urgently required. Systemic chemotherapy is proposed for patients with inoperable pancreatic PDEC, and adequate organ function and performance status; however, a standard chemotherapeutic regimen has not been established. In our patient, the tumor was inoperable owing to the presence of peritoneal dissemination and para-aortic lymph node metastases, and hence, systemic chemotherapy was administered to the patient.

Moertel et al[10] have reported that etoposide plus cisplatin produced good therapeutic results in patients with anaplastic neuroendocrine carcinoma (which has been defined as PDEC according to the recent WHO classification[11]), with an overall regression rate of 67% and a median regression duration of 8 mo [10]. Other investigators have reported similar results, with a median duration of response of 7-9 mo in patients with poorly differentiated endocrine tumors[12,13].

Since the report of Moertel et al[10], the combination of etoposide and cisplatin has been considered to be the reference treatment for PDEC; however, confirmatory studies have not been performed because of the rarity of PDEC. If this first-line chemotherapy fails to treat pancreatic PDEC, there is no consensus regarding further treatment recommendations. Irinotecan plus cisplatin is one of the standard regimens for extensive-stage SCLC[14]. In our case, the patient had been administered irinotecan monotherapy as second-line treatment before he was referred to our hospital. However, this therapy had been discontinued because ileus occurred after one cycle.

Several newer anticancer drugs, including paclitaxel[15], topotecan[16] and gemcitabine[17], have shown little activity as single agents against neuroendocrine tumors (NETs). Gemcitabine is a nucleoside analog with structural similarities to cytarabine and is widely used in the treatment of advanced pancreatic adenocarcinoma[18]. In a phase II trial of gemcitabine for the treatment of metastatic NETs, Kulke et al[17] have reported that, although the treatment was well tolerated, no radiological responses were observed, 65% of the patients (n = 18) experienced disease stabilization, and that the median overall survival was less than 1 year. However, their study included various histological subtypes of NETs, and only two of the 18 patients had poorly differentiated NETs. Thus, the efficacy of gemcitabine for poorly differentiated NET of the pancreas remains unclear.