Postoperative biliary strictures are the most common cause of benign biliary stricture in Western countries, secondary to either operative injury or bile duct anastomotic stricture following orthotopic liver transplantation (OLT). Surgery or endoscopic interventions are the mainstay of treatment for benign biliary strictures. We aim to report the outcome of 2 patients with refractory anastomotic biliary stricture post-OLT, who had successful temporary placement of a prototype removable covered self-expandable metal stent (RCSEMS). These 2 patients (both men, aged 44 and 53 years) were given temporary placement of a prototype RCSEMS (8.5 Fr gauge delivery system, 8 mm × 40 mm stent dimensions) in the common bile duct across the biliary stricture. There was no morbidity associated with stent placement and removal in these 2 cases. Clinical parameters improved after the RCSEMS placement. Long-term biliary patency was achieved in both the patients. No further biliary intervention was required within 14 and 18 mo follow-up after stent removal.

Self-expandable metal stents (SEMS) have been used for malignant biliary strictures, however SEMS placement for BBS has not been widely accepted owing to tissue in-growth leading to long-term complications[3-5]. A removable covered SEMS (RCSEMS) has not been extensively studied in the context of BBS but shows promise in early reports[6]. We report our preliminary experience with a prototype RCSEMS in 2 patients with refractory benign post-OLT anastomotic biliary strictures in Royal Prince Alfred Hospital, Sydney.

Two patients in our department with post-OLT anastomotic stricture refractory to conventional endoscopic and/or surgical interventions were treated with RCSEMS and prospectively followed. They both had similar clinical scenarios: recurrent cholangitis secondary to post-OLT anastomotic stricture, and failure of conventional placement of plastic stent in the common bile duct (CBD) to alleviate biliary stricture.

The clinical presentations of these 2 patients are described in Table 1. Their cholangiograms prior to stenting are shown in Figure 1A and B.

The prototype RCSEMS is a Niti-S biliary stent (Figure 2) which consists of an implantable metal stent and a flexible introducer system (Taewoong Medical Co Ltd., South Korea). The stent is a semi-rigid, flexible and expandable tubular device made of nitinol (nickel titanium alloy) wire. Upon deployment, RCSEMS imparts an outward radial force on the luminal surface of the biliary duct to establish patency. RCSEMS is available in one diameter (8 mm mid-portion and 10 mm at either ends) and one length (40 mm). There are 2 characteristic features of this prototype stent. Firstly, a 10 cm radio-opaque nylon string is incorporated into the distal end of the stent to facilitate endoscopic retrieval. Secondly, it has a waist which is 2 mm narrower than each end. RCSEMS is approved by Australian Therapeutic Goods Administration for use in biliary strictures.

Figure 2 Removable covered self-expandable metal stent with characteristic waist at mid-portion and a radio-opaque string attached to its distal end.

Side-viewing duodenoscopes (TJF-Q160R, and TJF-160VR; Olympus, Japan) were used for all procedures. All procedures were performed under general anesthesia. Sphincterotomy was performed in both cases prior to RCSEMS insertion. Over a guidewire and with fluoroscopic control, the RCSEMS was placed in the CBD across the stricture. Once the outer sheath was retracted and the stent deployed the catheter sheath was further retracted to release the 10 cm-long removal string. Figure 3 shows the cholangiogram with the RCSEMS in situ. 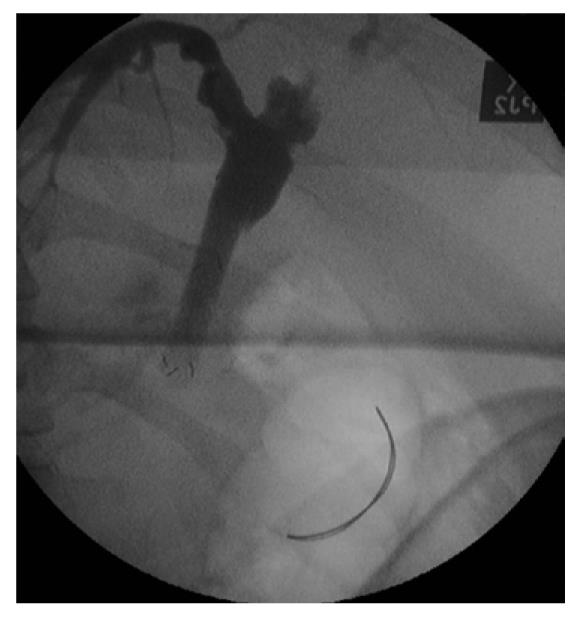 The removal of the RCSEMS was performed using a standard endoscopy biopsy forceps by grasping the string attached at the distal end of the RCSEMS and then pulling it via the working channel of the duodenoscope. A cholangiogram was performed at the end of the procedure to confirm the patency of CBD after RCSEMS removal (Figure 4A and B). All procedures were performed by a single dedicated endoscopist. 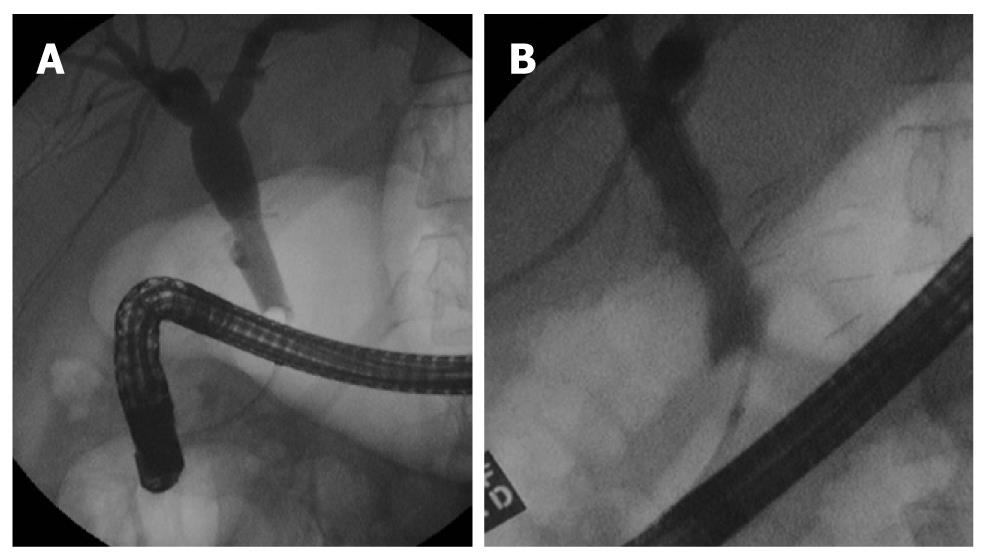 An RCSEMS was successfully placed in both patients as outpatient day procedures. The immediate post-RCSEMS placement period was uneventful. Liver biochemistry improved. The stent remained in situ for 42 and 70 d and no stent migration was observed.

RCSEMS removal was performed as an outpatient day procedure and was straightforward. Endoscopic retrograde cholangiopancreatography images of CBD post-RCSEMS removal demonstrated good patency (Figure 4A and B) with an improvement in diameter of more than 50% at the strictured area.

Patients were followed up after the RCSEMS removal for 14 and 18 mo. During follow-up, liver function tests remained stable. No further episode of jaundice and cholangitis and no further procedure was indicated.

In Western countries, postoperative BBS are usually secondary to intraoperative injury, most commonly during laparoscopic cholecystectomy. BBS following OLT can be anastomotic secondary to local ischemia or non-anastomotic, which are usually related to hepatic artery ischemia and often result in complex hilar structuring.

Historically, surgery was considered the treatment of choice for refractory BBS, offering 70% to 90% long term success[7,8]. However, endoscopic intervention has proven to be as effective as surgical intervention in the management of BBS in recent years[9-12]. This was best shown by treatment protocols usually consisting of insertion of increasing numbers of parallel plastic stents with or without biliary dilatation. Despite these endoscopic approaches, significant failure rates in stricture resolution have been encountered. In a study by Alazmi et al[13] on 143 post-OLT patients who were followed for 28 mo, the recurrence rate of stricture following endoscopic treatment was estimated to be 18%.

The use of SEMSs in malignant biliary stricture has been studied by many large, well-designed, randomized, controlled trials[14,15] and is accepted as standard practice. Vakil et al[16] examined human tissue responses to endoluminal metallic stents, and observed that the presence of foreign stent material could evoke granulation tissue formation and extensive fibrosis. A systemic appraisal of 400 cases of BSS treated with uncovered SEMSs with a median follow-up of 31 mo revealed a 35% rate of stent occlusion[17]. These authors therefore cautioned against long-term use of SEMSs in BBS.

Several groups have studied the temporary placement of covered SEMSs with planned retrieval and obtained promising results. Gwon et al[18] studied a total of 36 temporary bile duct stent-grafts and found a primary patency rate of 90.6% but migration in 11%. One large series of 79 cases using covered SEMSs in BBS was published by Kahaleh et al [6] in 2008, who reported 90% resolution of BBS and stent migration in 14%. These studies offered some promise but clearly significant problems remained.

In designing the ideal metal stent for a post-OLT stricture, there are several important considerations. The actual stricture length is usually short (0.5-1.0 cm) and the rest of the bile duct is usually of normal caliber. Using a long SEMS across the stricture and extending into the duodenum in this situation would impart pressure over a large area of normal duct, potentially risking pressure necrosis and fibrosis. Conversely, using a short SEMS would result in the stent being high up the CBD, making removal challenging. Stent migration is another well-recognized problem with covered SEMS and occurred in 5.8% to 25% of cases[19,20]. Having a stent of uniform caliber and covered with teflon or a similar material are 2 factors which may predispose to stent migration.

To address these problems, this prototype RCSEMS was designed with 2 key features. Firstly, a long removal string was attached to the distal end of RCSEMS. Removal of RCSEMS is possible by grasping this string with standard or “rat-tooth” forceps introduced via the working channel of the scope. Also, the RCSEMS has a waist diameter of 8 mm with 10 mm at both ends. These design features allow the radial force of the metallic stent to be directed maximally to the center hence inhibiting stent migration.

In conclusion, our initial experience in 2 cases treated with a prototype RCSEMS has shown no migration, easy insertability and removability with excellent stricture resolution at the end of the treatment and during medium-term follow-up. A pilot randomized, controlled trial is currently underway at our institution to verify the effectiveness and safety of this new device.