Filiform polyposis is a rare condition of uncertain pathogenesis that is usually found in association with Crohn’s disease, ulcerative colitis, intestinal tuberculosis or histiocytosis X. We report seven interesting cases of polyposis with various pathologic components, mainly located in the left side of the colon with no associated inflammatory bowel disease, intestinal tuberculosis or histiocytosis X. Multiple finger-like polypoid lesions with the appearance of stalactites were noted on the left side of the colon, especially in the sigmoid area, at the time of colonoscopy. The polyps had a variety of sizes and shapes and were shown to have various histopathologic components among the different patients. Although filiform polyposis localized in the sigmoid colon appears not to have high oncogenic potential, periodic follow-up seems to be needed.

Filiform polyposis is a rare form of pseudopolyposis associated with ulcerative colitis, Crohn’s disease, or granulomatous disease, which is formed by non-specific mucosal and submucosal reactions to previous severe inﬂammation[1-5]. The transverse and descending colon are the most common locations, although the polyps can be seen in any portion of the large bowel[3-6]. However, reports regarding filiform polyposis confined to the sigmoid colon, and the natural history or management of incidentally detected filiform polyposis in patients without the definite history of ulcerative colitis, Crohn’s disease, or intestinal tuberculosis are inadequate[7,8].

We report seven interesting cases of filiform polyposis with mixed histologic components, including mainly inflammatory and hyperplastic or adenomatous components, located in the sigmoid area, without a definite history of severe inflammation such as inflammatory bowel disease (IBD) or intestinal tuberculosis.

A 38-year-old male patient had sudden onset abdominal pain, diarrhea, and hematochezia for 2 d and had been diagnosed as having infectious colitis. He did not have a medical history of tuberculosis, IBD, or infectious colitis. Colonoscopic examination showed multiple, variable-sized polyps that were found in the sigmoid colon (Figure 1A). These polyps were histopathologically proven to be inflammatory and hyperplastic. Up to 44 mo later, there was no evidence of malignant change in the polyposis on follow-up colonoscopy examination. 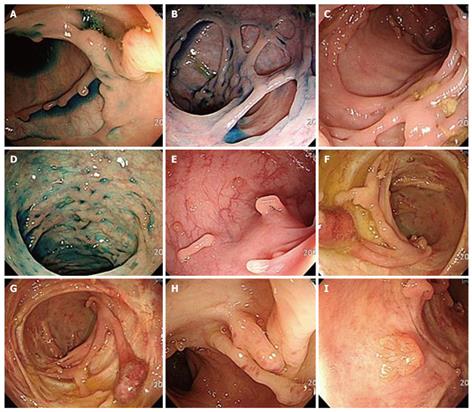 A 64-year-old healthy male patient had no medical history of IBD or lower gastrointestinal symptoms. Colonoscopy was performed for screening purposes. On the colonoscopic examination, multiple long worm-like polyps were noted at the sigmoid colon (Figure 1B). These growths were histopathologically proven to be inflammatory polyps. Two large polyps were also found in the ascending colon and snare polypectomy was performed. These polyps were adenomas by pathologic evaluation.

On the follow-up colonoscopic examination 6 mo later, multiple finger-like polypoid lesions with the appearance of stalactites persisted on the left side of the colon, especially in the sigmoid area (Figure 1C). Large polyps with a hyperemic mucosa were removed by snare. These polyps were hyperplastic, tubular adenomas and filiform polyps with lymphoid hyperplasia. Up to 43 mo later, there was no evidence of malignant change in the polyposis on follow-up colonoscopy examination.

A 37-year-old male patient had frequent intermittent diarrhea after abdominal pain and was diagnosed as having irritable bowel syndrome. Colonoscopy was performed and multiple polyps were seen, which were densely packed, forming a roof in the sigmoid colon (Figure 1D). A representative polyp was removed by snare and shown to be a filiform or hyperplastic polyp on pathologic assessment. Up to 46 mo later, there was no evidence of malignant change in the polyposis on follow-up colonoscopy examination.

A 67-year-old asymptomatic male patient stated that colonofiberscopy had been performed at another hospital 2 years previously and the colonoscopic findings were lesions suspicious for intestinal tuberculosis. Colonofiberscopy was conducted again and multiple polypoid lesions with variable shape and size were found at the sigmoid colon (Figure 1E). To establish the exact pathologic diagnosis, snare polypectomy was performed. The pathologic results revealed that the polyps were mainly filiform and hyperplastic. Up to 46 mo later, there was no evidence of malignant change in the polyposis on follow-up colonoscopy examination.

A 77-year-old male patient generally had no lower gastrointestinal symptoms. The colonoscopic findings showed multiple polyps forming a densely packed bridge in the sigmoid colon (Figure 1F). These polyps were pathologically diagnosed as being mainly filiform and hyperplastic. Up to 34 mo later, there was no evidence of malignant change in the polyposis on follow-up colonoscopy examination.

An 81-year-old female patient was referred to our hospital for evaluation of sigmoid polyposis. Colonoscopy was performed and worm-like polyps located in the sigmoid colon were shown (Figure 1G). In addition, one polyp was reported as chronic non-specific inflammation with crypt cell hyperplasia and another was a hyperplastic polyp with focal atypical glands, favoring a reactive hyperplasia. Up to 38 mo later, there was no evidence of malignant change in the polyposis on follow-up colonoscopy examination.

A 63-year-old female had a history of diarrhea, abdominal pain, and weight loss for several months. The patient was referred to our hospital for further evaluation of multiple colon polyps. On colonoscopy, multiple variable polyps were noted in the cecum, ascending colon, and mainly in the sigmoid colon. Multiple finger- or worm-like polypoid lesions were noted in the sigmoid colon (Figure 1H and I). The polyps were of various size and shape. The tips of the polyps adhered to other parts of the mucosa, forming loops or bridges between opposing walls. Large polyps were removed by snare. All these polyps, except one, were shown to be hyperplastic or filiform (inflammatory) based on pathologic evaluation (Figure 2A and B). Only one polyp was shown to be a villous adenoma (Figure 2C). Up to 36 mo later, there was no evidence of malignant change in the polyposis on follow-up colonoscopy examination. We recommended periodic colonoscopy for cancer surveillance.

In our case series it cannot be completely excluded that filiform polyps may have emerged as asymptomatic sequelae of intestinal tuberculosis, IBD, other infectious colitis, ischemic colitis, or histiocytosis X.

We report seven patients with filiform polyposis mainly localized in the sigmoid colon. Although none of our cases showed progression into adenocarcinoma, various pathologic findings, including mainly filiform polyps, hyperplastic polyps or adenomas, were found. None of the patients had a definite history of IBD, intestinal tuberculosis, infectious or ischemic colitis, but the filiform polyposis seemed to be a sequela of asymptomatic chronic colonic inflammation. Although definite evidence is insufficient, filiform polyposis localized in the sigmoid colon appears not to have high oncogenic potential. However, periodic follow-up seems to be necessary because large polyps were intermittently proven to be adenoma in our case series.

We have reported seven cases of filiform polyposis involving the sigmoid colon in Koreans who had no definite history of IBD or intestinal tuberculosis. Up to the present, studies regarding filiform polyposis syndrome located in the left side of the colon are insufficient. Continuous close follow-up of these seven patients and collection of large numbers of cases should be performed in order to understand the natural history and observe the possibility of progression into cancer.