Various extraintestinal manifestations including pulmonary abnormalities have been reported in patients with ulcerative colitis. Acute respiratory distress syndrome (ARDS) is a serious and fatal pulmonary manifestation. We have experienced a 67-year-old male patient with ARDS associated with a severe type of ulcerative colitis (UC). Severe dyspnea symptoms occurred during the treatment of UC in a previous hospital and the patient was transferred to our hospital on June 27, 2007. Both blood and sputa cultures for bacteria and fungi were negative. Cytomegalovirus antigenemia was also not detected. From the clinical and radiological [Chest X-ray, computed tomography (CT)] findings, the patient was diagnosed with ARDS on the basis of the definition of ARDS developed by the European-American Consensus Conference on ARDS. Both colonic inflammations and ARDS symptoms of the patient were resistant to any medical treatment including corticosteroids and antibiotics. However, ARDS symptoms were dramatically improved after surgical colectomy. We believe that severe colonic inflammation from UC was closely associated with the onset of ARDS of the patient. Our case report suggests that a severe type of ulcerative colitis might be taken into consideration as one of the predisposing factors of ARDS.

Ulcerative colitis (UC) is a chronic intractable colitis with unknown etiology. Various extraintestinal manifestations, including hepatobiliary, musculoskeletal, dermatologic, ocular and pulmonary symptoms, have been reported in patients with UC[1-3]. Acute respiratory distress syndrome (ARDS) is a serious and fatal pulmonary manifestation and overall mortality from ARDS has been typically reported to be greater than 50%[4]. Here, we showed an ARDS patient associated with severe UC. ARDS symptoms of the patient were resistant to any medical treatment but dramatically improved after surgical colectomy. Our case suggests that severe colonic inflammation from UC was closely associated with the onset of ARDS.

A 67-year-old male patient visited a previous hospital due to bloody diarrhea on March 1, 2007. He was diagnosed as having UC based on clinical, endoscopic and histological criteria. He was admitted to the hospital and underwent treatment with mesalamine, prednisone (40 mg), and azathioprine (50 mg). Leukocytapheresis therapy was also performed. However, his abdominal symptoms and endoscopic findings got worse and an intensive intravenous steroid regimen with 60 mg prednisone was started. During the treatment, he complained of severe dyspnea and a chest-X ray revealed pulmonary edema. Treatment with azathioprine and mesalamine was discontinued after he complained of severe dyspnea. Then, the patient was transferred to Akita University Hospital for intensive treatment on June 27, 2007. On physical examinations, he had tachycardia (134 bpm) and a fever (38.1°C), and coarse crackles were audible in both lung fields. Tenderness was observed in the lower abdomen but no symptoms suggesting peritonitis were found. Blood chemistry values on June 28 were as follows: hemoglobin (Hb) 8.9 g/dL, hematocrit (Ht) 27.9%, white blood cell count (WBC) 3100/L, C-reactive protein (CRP) 2.92 mg/dL, total protein (TP) 4.4 g/dL, albumin 2.4 g/dL, L-aspartate 2-oxoglutarate aminotransferase (AST) 74 U/L, L-alanine 2-oxoglutarate aminotransferase (ALT) 73 U/L, alkaline phosphatase (ALP) 785 U/L, blood urea nitrogen (BUN) 31.9 mg/dL, creatinine (Cr) 0.38 mg/dL. Anemia, inflammatory changes, hypoproteinemia, and liver dysfunction were observed. Chest X-ray showed pulmonary edema without enlargement of the heart (Figure 1A). Arterial blood gas values were PaO2 39 mmHg; PaCO2 35.7 mmHg; pH 7.518; and HCO3 28.4 mEq/L, showing impaired oxygenation. Ultrasound cardiography showed normal heart function, with no enlargement of the right atrium and ventricle. From these clinical and radiological findings, the patient was diagnosed as having ARDS. Chest computed tomography (CT) scan images of the patient were also compatible with ARDS (Figure 2). Both blood and sputum cultures for bacteria and fungi taken in the hospital were negative. Low levels of Candida antigen and a slight increase of β-D glucan were found in the patient’s blood. However, serum Candida antigen promptly decreased after treatment with an antifungal drug (fosfluconazole). Cytomegalovirus antigenemia was not detected. Dyspnea of the patient was severe and not improved by nasal oxygen supplementation. Then, the patient was admitted to the intensive care unit (ICU) with intubation and positive pressure ventilation. However, despite intensive medical treatment including prednisone, antibiotics (cefazolin sodium, imipenem/cilastatin sodium), and sivelestat sodium hydrate, pulmonary condition and abdominal symptoms of the patient were not improved. Colonoscopic examination on July 2nd also showed severe colonic inflammation with multiple deep ulcers (Figure 3). However, cytomegalovirus antigenemia was not detected. Both fecal culture and fecal Clostridium difficile toxins were negative. Bronchoscopy on July 6th showed wet bronchial mucosa with a little inflammatory change, and no bacteria and fungi were detected by culturing the sputa collected by bronchoscopy. Colonoscopic findings together with his clinical course strongly suggested that the predisposing factor of ARDS of the patient might be severe inflammation of the colon. Thus, we thought that surgical colectomy was essential to rescue the patient from ARDS, and subtotal colectomy was performed on July 11. Postoperatively, gas exchange was dramatically improved, and he was weaned off the ventilator on July 19. A chest X-ray taken August 11 (Figure 1B) was also significantly improved. After an additional 55 d recovery, he was discharged from the hospital with no respiratory symptoms. 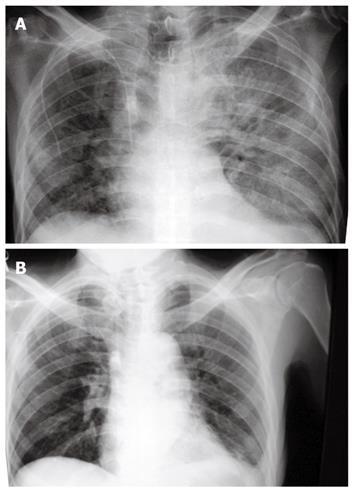 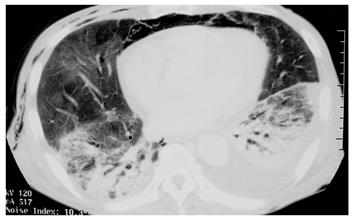 Both UC and Crohn’s disease are chronic intractable inflammatory bowel diseases (IBD). It has been shown that 30%-50% of IBD patients have pulmonary abnormalities[1]. In addition, drug-induced lung injuries have also been reported in IBD patients[5,6]. ARDS is a complex response of the lung to direct and indirect insults and numerous predisposing factors causing ARDS, such as toxic inhalation, diffuse infection, sepsis, pancreatitis, etc., have been reported[4]. With regard to an association between UC and ARDS, only one ARDS patient accompanied by UC has been reported to date[7]. In this report, we diagnosed the patient as having ARDS based on the definition of ARDS developed by the European-American Consensus Conference on ARDS[4], namely, PaO2/FiO2 < 200, the detection of bilateral pulmonary infiltrates on frontal chest radiography, and no clinical evidence of elevated left atrial pressure. With regard to the predisposing factors of ARDS, we could not detect particular factor that clearly caused ARDS in our patient. Although very low levels of Candida antigen was detected in the blood, Candida was not detected by sputa cultures and ARDS symptoms of the patient were not improved after the decrease in the Candida antigen. Thus, we did not think that Candida was the predisposing factor of ARDS in our patient. Other fungi as well as Candida were not detected by sputa cultures, which were examined several times. Although severe inflammation with deep ulcers was endoscopically observed in the colonic mucosa, Cytomegalovirus antigenemia was not detected in the patient during the admission.

Nagy et al[6] recently reported a case of interstitial pneumonitis, which was suggested to be ARDS, in a patient with UC treated with azathioprine (150 mg/d, 10 years). They demonstrated that the pulmonary condition of this patient was gradually improved by the discontinuation of azathioprine and treatment with corticosteroids. Our patient was also treated with azathioprine. However, the dose of azathioprine of our patient (50 mg/d, 2 mo) was much smaller than that of Nagy et al’s case[6]. Although an association between azathioprine and the onset of ARDS of our patient was not completely excluded, we consider that ARDS symptoms of our patient were not due to administration of azathioprine but due to severe inflammation of ulcerative colitis on the basis of the following findings. First, ARDS symptoms were not improved but worsened after the discontinuation of azathioprine. In addition, ARDS symptoms were not improved by the intravenous corticosteroid treatment. Second, ARDS symptoms of the patient appeared to be correlated with the severity of UC and were dramatically improved after surgical colectomy. From these findings, we believe that severe colonic inflammation from UC was closely associated with the onset and the persistence of ARDS of our patient. It is suggested that pathogenic factors that caused ARDS in our patient were probably produced in the inflamed colon. ARDS is a serious and fatal pulmonary manifestation caused by a systemic inflammatory status. Our case report suggests that a severe type of UC might be taken into consideration as one of the predisposing factors of ARDS.