CONCLUSION: Alcoholic hepatitis is a severe liver disease with a high mortality rate, and hepatic failure, gastrointestinal bleeding and infection are the three main causes of death.

Alcohol abuse causes a variety of liver diseases including alcoholic steatosis, alcoholic hepatitis, liver fibrosis and cirrhosis[1,2]. Generally, alcoholic steatosis is a benign lesion with a favorable prognosis if the patient abstains from alcohol use, whereas alcoholic hepatitis, which is observed in approximately 20% of heavy drinkers, is much more serious and requires treatment[3]. With increasing alcohol consumption worldwide, alcoholic liver disease has become a significant global health concern[4,5].

In this study, we conducted a pooled analysis of data about alcoholic hepatitis patients who were treated with placebo in the eligible randomized placebo-controlled trials, in an attempt to evaluate the early mortality of such patients.

Two investigators independently performed the study selection. Search findings were screened for potentially eligible trials and full-text articles were obtained for their detail evaluation. Disagreements between the two investigators regarding studies included were solved by consensus.

Studies fulfilling the following criteria were included: studies of a randomized placebo-controlled clinical trial in alcoholic hepatitis patients, studies with enrollment, treatment and analysis of patients well-defined, and studies with more than 15 patients involved in the placebo arm, since we believed that they would not generate enough meaningful data to allow quality assessment. Trials were excluded if relevant data were not extractable or if the case-mix included unclassified alcoholic liver disease patients. Alcoholic hepatitis patients in the placebo arms that received basic active treatment with drugs such as steroids were also excluded.

Data extracted from the studies included name of the first author, publication year, study design, location(s), sample size, randomized method, and gender, mean age and disease severity of patients, description of active therapy, duration of therapy, duration of follow-up, mortality data and causes of death. Data extraction was performed by two independent reviewers. Sections of METHODS and RESULTS were coded to blind reviewers to the above information. Primary investigators were contacted if data were incomplete. The methodological quality of studies included was assessed using a validated quality checklist[12] with a maximum score of 32. A score of 12 (38%) or greater was considered to have acceptable quality[13]. 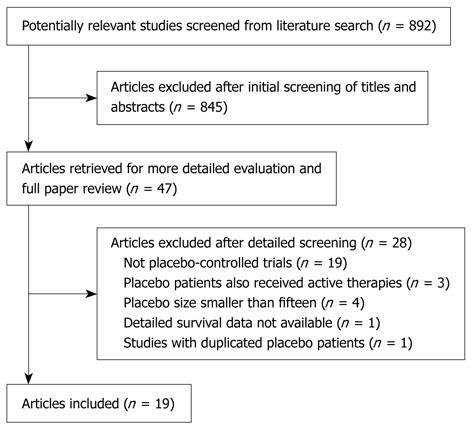 Of these 19 clinical trials, 9 were single center studies, 10 were multi-center studies. A total of 661 patients with a mean age of 46.4 years served as placebo controls. Detailed information and summarized information about the studies included are shown in Tables 1 and 2, respectively.

Unlike nonalcoholic hepatitis, a chronic form of liver disease associated with obesity, alcoholic hepatitis is an acute and potentially life-threatening form of liver disease[41]. The cause of its early mortality is not clear since it is difficult to evaluate a sufficient number of such patients without prompt treatment upon diagnosis. In this study, the data about 661 placebo-treated patients extracted from 19 placebo-controlled trials were evaluated, showing that the mortality rate of alcohol hepatitis patients is 34.19% with a pooled one-month mortality rate of 20.37%, which increases with increasing disease severity. These findings suggest that alcoholic hepatitis patients should be treated promptly upon diagnosis.

Due to the limited available data, there are some limitations in this study. First, we did not analyze the factors predicating the early mortality rate of alcoholic hepatitis patients since necessary data could not be extracted from the studies included. However, our pooled analysis provided the main causes of death, which may be of importance in clinical practice. Second, we did not clarify whether the mortality rate of alcoholic hepatitis patients varies between males and females. Since females are reported to be more sensitive to alcohol abuse[7], it would be of interest to compare mortality rates of both genders. Third, we did not analyze the potential heterogeneity due to the relative small number of placebo patients. We grouped all the patients irrespective of their age, gender, ethnic distinction, or severity of disease. The pooled analysis of all these cases provided a clearer general picture of early mortality rate in a relatively large sample of alcoholic hepatitis patients.

Alcoholic hepatitis is a potentially life-threatening complication of alcohol use, but its natural history has not been clarified so far.

This study has confirmed that alcoholic hepatitis is a severe liver disease with a high early mortality, especially among those with moderate to severe disease.

The results of this study suggest that hepatic failure, gastrointestinal bleeding and infection should be treated in order to prevent early death of alcoholic hepatitis patients.

Alcoholic hepatitis is a disease resulting from hepatocellular necrosis and inflammation in alcoholic patients. Its pathogenesis is a multifactorial process involving metabolism of alcohol to toxic products. Kupffer cell stimulation by endotoxin and nutritional impairment lead to liver injury and inflammation, etc.

This is an interesting review of data concerning the early mortality of alcoholic hepatitis. The authors critically discussed the limitation of their survey.