We report an extremely rare case of adult intussusception caused by anisakiasis. A 41-year-old man was admitted into our hospital for right lower abdominal colicky pain. Ultrasonography and computed tomography revealed the presence of intussusception. As pneumo-dynamic resolution by colonoscopy failed, surgery was performed. The anisakis body was found in the submucosal layer of the resection specimen. The patient was discharged 9 d after the operation. Anisakiasis may cause intussusception in any country where sushi or sashimi now exists as a popular food. If suspicious, detailed clinical interview as to food intake prior to symptom development is crucial.

New food culture may bring a new cause of disease. The culture of eating raw fish, such as sushi and sashimi, has been spreading worldwide and now exists in the United States, European and Asian countries. This may provide the possibility of accidentally contracting anisakiasis, a parasitic disease. We report an extremely rare case of adult intussusception caused by anisakiasis.

A 41-year-old man was admitted into our hospital for right lower abdominal colicky pain that had abruptly occurred at midnight of the day before, and which had gradually worsened.

Physical examination revealed a 5 cm-sized, hard and non-mobile mass with extreme tenderness in his right middle abdomen. Ultrasonography (US) showed multiple concentric ring signs and hay-fork signs. Thus, he was diagnosed as having intussusceptions. Abdominal X-ray revealed null colon gas but feces in the right lower abdomen. Contrast-enhanced abdominal computed tomography (CT) showed invaginations of the ascending colon (Figure 1), the wall of which looked highly edematous. As the ascending colon was obstructed by these invaginations, the colonic lumen was filled with stool at the oral side of this obstruction. No solid tumor was detected at the top of these invaginations and the colonic wall was well enhanced, indicating no ischemic change existed. 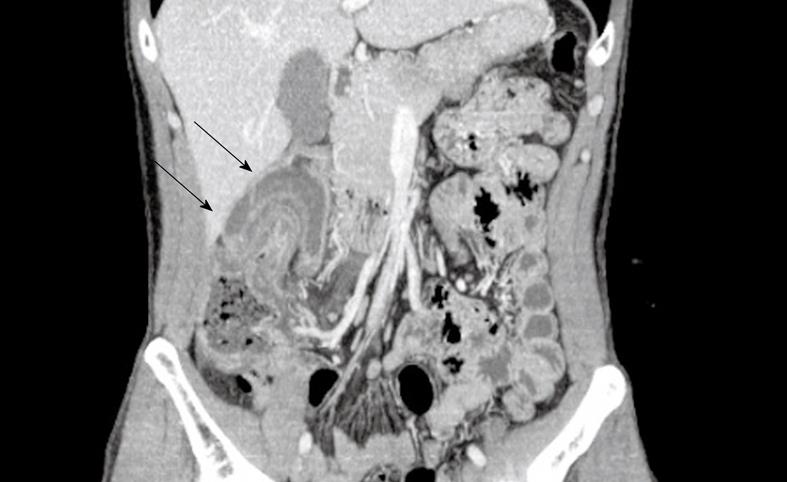 First of all, we performed colonoscopy an hour after admission, hoping for both differential diagnosis of intussusceptions and pneumo-dynamic resolution. The leading top of the invaginations was yellowish, edematous and tensioned. No tumor was discernible. As pneumo-dynamic resolution of the intussusceptions by colonoscopy was not achieved, open surgery was performed 3 h after admission.

The resection specimen contained a 4 cm-sized yellowish inflammatory mass (Figure 2) at the leading top of these invaginations. The mass was edematous, well tensioned and the mucosal surface that surrounded the mass was normal. 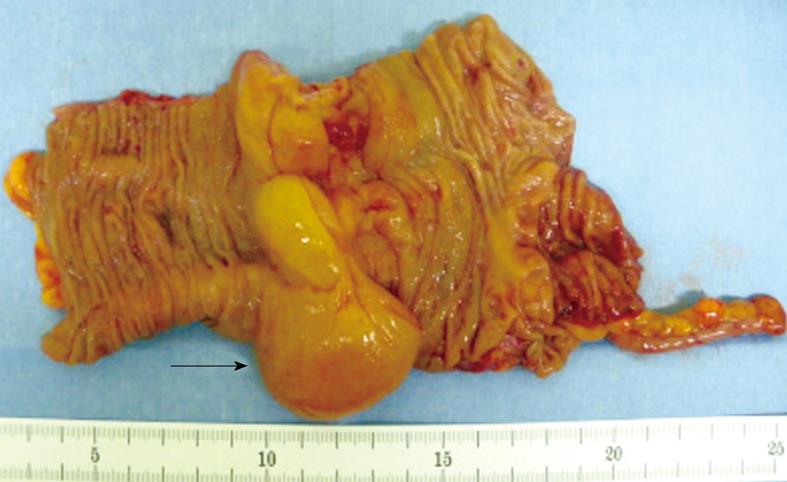 Figure 2 A gross view of the resection specimen. The extirpated mass is 4 cm in diameter and its surface is smooth, yellowish, edematous and slightly soft (arrow).

Figure 3 Histopathological findings of the resection specimen. An anisakis body (arrow) is demonstrated in the edematously inflamed submucosa of the extirpated ascending colon (hematoxylin and eosin stain; × 20). Note that many eosinophils and lymphocytes infiltrate around the anisakis body, forming an eosinophilic granuloma. A magnified picture of the anisakis body is shown in the inset below right (hematoxylin and eosin stain; × 40).

A retrospective clinical interview was performed where the patient told us that he had eaten marinated mackerel 2 d before admission. A retrospective analysis of his serum revealed that an anti-anisakis antibody test was positive. Based on these findings, we finally diagnosed this case as intussusceptions of the ascending colon caused by anisakiasis.

The patient’s abdominal pain immediately disappeared after surgery. He clinically recovered well and was discharged 9 d after the operation.

Adult intussusception (AI) occurs much less often than in children and accounts for only 5% to 10% of all intussusceptions[1]. More than 90% of AI derive from tumorous lesions[1], 60% of which are malignant and the remaining 40% are benign tumors[2]. Thus, almost all surgeons agree that operation is strongly recommended as a treatment for AI because of the high incidence of malignancy[1].

US[3-5] and CT are very useful for diagnosis of AI. There are specific US findings named as “multi concentric ring sign”[4], “target ring sign”[3], or “hay-fork sign”[5]. However, these signs are often hard to determine, being masked by a fully gas-filled bowel[6].

CT is the best modality to diagnose AI, visualizing “target signs”, or “bowel-within-bowel” appearances[7]. The location or nature of tumors if present, soft tissues involved in the invaginations, obstruction and threatening signs of bowel viability, can all be evaluated by CT[7]. Recently, multiplanar reconstruction (MRP) imaging by the multi-detector row CT has been developed and is more useful for diagnosing intussusceptions than other imaging examinations[8].

Most surgeons agree that surgery is preferable as a treatment for AI because of the high frequency of malignancy[1,2,9]. The resolution of intussusceptions has some risks, such as (1) intraluminal seeding and dissemination, (2) perforation and peritoneal dissemination and (3) anastomotic complication with edematous and fragile bowel wall[1,2,9,10].

Anisakiasis is one of the parasitic diseases and is regarded as larva migrans of Anisakis[11]. A person is accidentally infected by eating raw or uncooked fish containing the parasites. The larva of Anisakis penetrates into the mucosa of the digestive tract and causes anisakiasis[12]. The preferential location of anisakiasis in Japan is the stomach (96%) rather than the intestine (4%)[13]. On the other hand, Van Thiel et al[14] and Smith et al[15] reported that intestine was more frequent than stomach in European countries. The symptoms of intestinal anisakiasis are non-specific, sometimes colicky and diffuse abdominal pain, nausea and vomiting[12]. Patients are often misdiagnosed as having acute appendicitis or terminal ileitis[12]. Clinical symptoms appear within 48 h after food intake, continue for 1 to 5 d and spontaneously recover[16]. Our case had an operation since the conservative therapy was not effective in the resolution of intussusception.

AI caused by anisakiasis is extremely rare. There have previously been two English and nine Japanese reports about AI caused by anisakiasis (Table 1)[17-27]. All cases ate raw or marinated fish from half a day to 7 d before the symptom onset. Colon and jejunum were usually involved. The common symptom was abdominal tenderness, although with no palpable mass in jejunum cases. Since the ascending colon is fixed in the retroperitoneum and exists near the abdominal wall, we can physically detect a mass at ease. On the other hand, jejunum, transverse colon and sigmoid colon are not fixed and not necessarily near to the abdominal wall, so it is usually hard to detect a mass. Pneumo-dynamic resolution of AI by colonoscopy was successful in two of the twelve cases in whom emergency operation could be avoided. Correct diagnosis could be preoperatively made in only one of these two by a detailed clinical interview. Ten of the twelve cases had eosinophilic granuloma. Thus, it has been shown from the literature that if raw fish intake is not discovered at interview, or incidental detection of anisakis body fails, it is hard to determine what caused intussusception prior to surgery. That is the reason why surgery was indicated in almost all cases. Therefore, AI is, in general, a good indication for operation although we do not know what would happen if surgery was not performed.

We would like to draw attention to the risk of anisakiasis since it may occur in Japanese, Chinese and European countries and also the United States of America where sushi or sashimi is now prevailing as a popular cuisine. Thus, we believe that if suspicious, detailed clinical interview as to food intake prior to symptom development is crucial.