Lipoma is relatively common in the colon but is less often in the small intestine. Most lipomas are incidentally detected at endoscopy and are usually small and asymptomatic. However, some of them can present with obstruction and/or intussusceptions. Surgical resection is commonly recommended to remove such significant lipomas with a limited pedicle and larger than 2 cm in size, as endoscopic resection may result in unfavorable complications such as intestinal perforations. We report a case of 62-year-old man presenting with hematochezia. Colonoscopy showed a submucosal tumor, about 50 mm in size, in the terminal ileum. A clinical diagnosis of lipoma was established based on the findings of colonoscopy and abdominal computed tomography (CT). As the patient complained of hematochezia and mild iron deficiency anemia associated with repeated tumor prolapse, we decided to remove his lipoma. Consequently, the lesion was completely removed en bloc. Although abdominal CT immediately after removal of the lesion showed a small amount of free air, conservative treatment was successfully carried out for the perforation. Histologically, the removed lesion was a lipoma.

Lipoma is relatively common in the colon (65%-75%) but is less often in the small intestine (20%-25%). Most lipomas are incidentally detected at endoscopy and are usually small (less than 2 cm) and asymptomatic. However, some of them can present with obstruction and/or intussusceptions[1]. Surgical resection is commonly recommended to remove such lipomas with a limited pedicle and larger than 2 cm in size, as endoscopic resection may result in unfavorable complications such as intestinal perforations[2]. We herein report a case of a large lipoma, 50 mm in diameter, arising from the end of ileum, which was completely removed with the so-called endoscopic unroofing technique in combination with endoscopic submucosal dissection (ESD)[3,4].

A 62-year-old man presented with hematochezia. Colonoscopy showed a pedunculated lesion, about 50 mm in size, originating from the ileum end. With peristalsis, the lesion prolapsed through the ileocecal valve into the cecum and ascending colon (Figure 1). The surface was regularly covered with normal mucosa, except for a part of nodular change suggesting hyperplastic mucosa due to repeated prolapse, and “Cushion-sign” was positive[5]. Moreover, computed tomography (CT) showed a uniform mass with a very low-density in the ileum end corresponding to the above detected lesion (Figure 2A and B). A clinical diagnosis of ileal lipoma was established based on the above findings. Although there was not any symptom of intestinal intussusception, multiple erosions were seen in the ascending colon perhaps caused by the tumor prolapsing with peristalsis. As oozing of blood was also seen, the ileal lipoma was considered as the bleeding source of his hematochezia. Therefore, local resection was decided for treatment. At first, conventional endoscopic mucosal resection (EMR, lift and cut technique) was attempted under CO2 insufflation. However, the tumor was too large for the largest commercially available snare with a maximum diameter of 33 mm in our department to capture the whole lesion after injection of glycerol at the base of the lesion (Figure 3A). Alternatively, endoscopic submucosal resection (ESD) was conducted with an IT-knife for removal. Unfortunately, the muscle layer was lacerated and serosal membrane was observed during dissection (Figure 3B). Thus, we used the snare to break the mucosal layer on the top of the lipoma, and then dissection from the defect on the top rather than from the base of the lesion was continued. Capsulated fat tissue extruding through the overlying mucosa during dissection (naked fat sign) was seen (Figure 3C)[5,6]. Finally, the lesion was completely removed en bloc (Figure 3D). The vital signs were stable and no abdominal distension or discomfort was found during the whole procedure. The lacerated muscle layer could not be completely but only partially sutured with metallic clips due to the narrow lumen in the terminal ileum. Abdominal CT immediately after removal, however, showed only a small amount of free air around the ileum end without ascites. Conservative treatment including withholding of oral intake, intravenous administration of antibiotics and hyperalimentation was started after consultation with the surgeons. The vital signs were stable except for fever (at the highest degree of 38°C) for 2 d. No sign of peritoneal irritation suggesting diffuse peritonitis was seen on close physical examination. Oral intake was restarted on the fifth day after ESD, and the patient was discharged uneventfully 2 d thereafter. Histologically, the removed lesion was a lipoma. 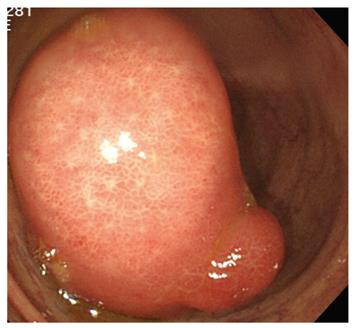 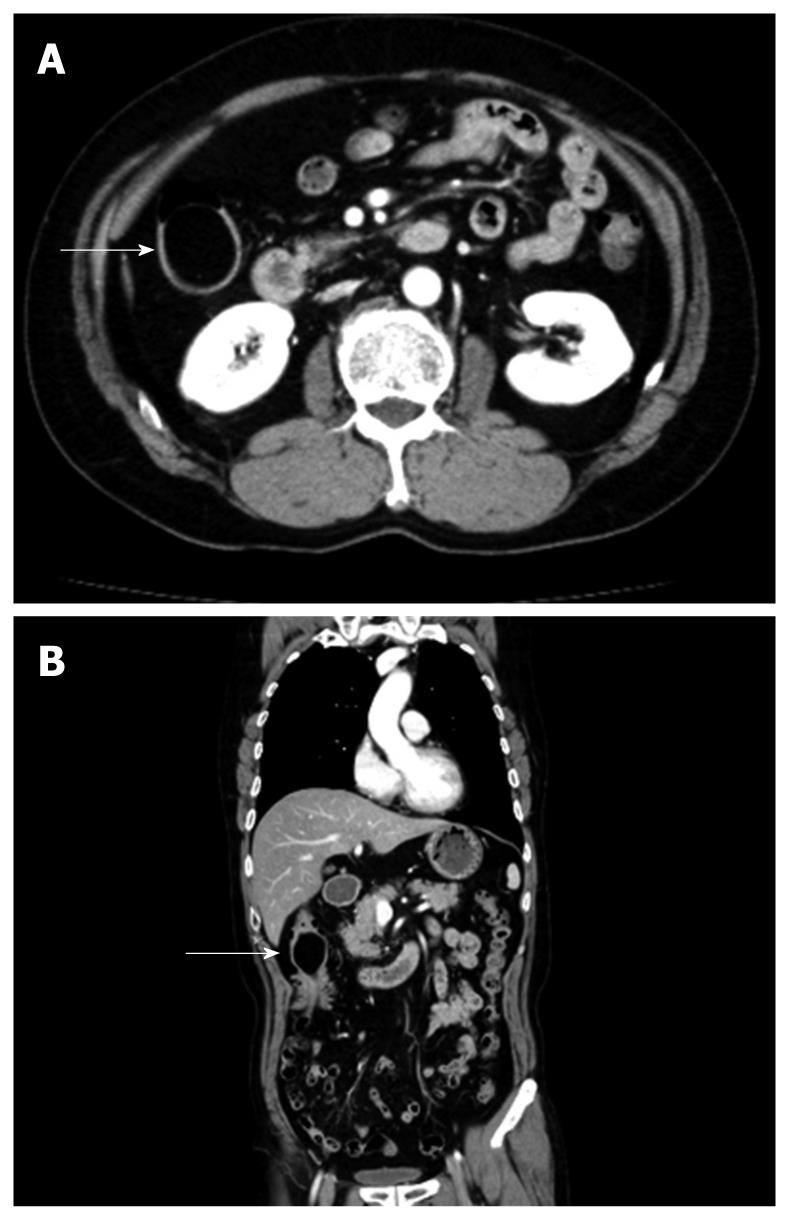 Figure 2 Abdominal CT showing a round, smooth and well-demarcated tumor at the end of the ileum (A) with a fat attenuation coefficient of -116 Hounsfield units (arrows) (B). 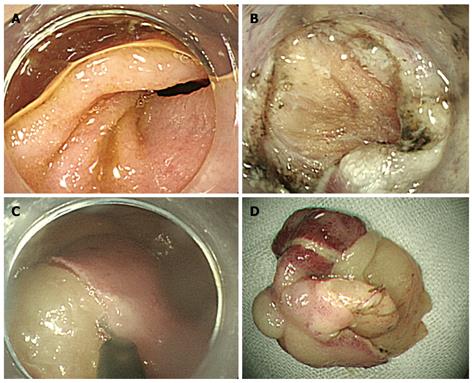 Figure 3 Whole captured lesion after injection of glycerol at the base of the lesion. The base of the lipoma (A), lacerated muscle layer (B), dissected overlying mucosa and capsule (C), and completely removed lipoma (D).
DISCUSSION

This lipoma could be correctly diagnosed before resection, as endoscopically it was a submucosal tumor with a positive “Cushion sign”, and moreover computed tomography disclosed a round and smooth, well-demarcated tumor with a fat attenuation[7,8]. Although, lipohyperplasia, frequently discovered at the right-sided colon (especially in the ileocecal valve), should be included in the differential diagnosis, the encapsulated yellowish adipose tissue detected during endoscopic dissection finally supported the endoscopic diagnosis of a lipoma rather than lipohyperplasia before histological evaluation. We decided to treat this ileal lipoma, as the patient complained of hematochezia and mild iron deficiency anemia associated with erosions caused by repeated tumor prolapse. Various techniques including endoscopic removal and surgical resection have been reported[9,10]. We firstly attempted conventional EMR. However, unfortunately the tumor could not be completely captured with the largest snare. Piecemeal resection was also tried but failed to electrosurgically resect the tumor with the snaring technique. We therefore used the ESD technique to remove this large lesion, as this newly developed technique can remove this kind of large lesions en bloc[11].

During dissection, since laceration of the muscle layer and thereafter the serosa were unfortunately endoscopically identified, we modified the ESD technique for removal. We enrolled the reported unroofing technique in combination with ESD for endoscopic resection[3,4,12]. At first, the overlying mucosa and capsule of the lipoma were peeled off with the tip of the snare and IT knife from the top to the bottom of the tumor. The underlying adipose tissue was thereafter seen like a peeling banana. This modified technique finally enabled us to completely remove the lipoma en bloc. Different from the submucosal direct dissection at the base, we dissected this lipoma from the top to the bottom rather than from the base. We believe that this modified technique can remove large lipomas more safely and quickly than ESD[11].

Perhaps, perforation is one of the most serious complications associated with endoscopic resection. We did not close the lacerated muscle layer immediately, as the clips in the narrow lumen of ileum would disturb continuing the endoscopic procedure. Fortunately, we could complete the endoscopic removal, as the patient did not develop pneumoperitoneum and the lumen was not collapsed. Furthermore, we could not close the perforation completely with metallic clips. However, conservative treatment was carried out successfully. Our case was treated successfully without laparotomy. However, the choice of conservative or surgical treatment for iatrogenic colonic perforation remains controversial. In this case, non-surgical treatment was selected because the vital signs of the patient were stable, the abdominal pain was mild and localized, no unexplained peritoneal fluid was found in the abdominal CT, and the colonic preparation was extremely good. We also believe that CO2 insufflation plays an important role in this successful conservative treatment, as room air insufflation would lead to pneumoperitoneum collapsing the lumen and vital signs (abdominal compartment syndrome)[13-16].

In conclusion, large ileal lipoma can be completely removed with the modified ESD procedure in combination with endoscopic unroofing technique (from the top to the bottom like peeling a banana).