RESULTS: The resultant hepatocytes with high viability (97%) were successfully immortalized with retroviral vector SSR#69. One of the immortalized clones showed the typical morphological appearance, TJPH-1, and was selected by clone rings and expanded in culture. After excision of the SV40T gene with Cre-recombinase, cells stopped growing. The population of reverted cells exhibited the characteristics of differentiated hepatocytes.

A virtually unlimited supply of hepatocytes for metabolic studies, bio-artificial livers and cell transplantation would be highly desirable[1,2]. However, the utility of cultured hepatocytes is hampered by difficulties in timely obtained populations of primary cells, which have a limited life span in vitro. An attractive alternative source of hepatocytes would be immortalized cells which could make unlimited supplies of cells feasible and exhibit the characteristics of differentiated hepatocytes[3]. A series of studies have developed the strategy of cell immortalization[4,5]. However, the oncogene in the immortalized hepatocytes would expose patients to an unacceptable tumorigenic risk. An attractive solution for this problem could be the use of a novel strategy of reversible immortalization by using Cre/loxP site-specific recombination[6]. It has been reported that Cre/loxP recombination operates efficiently in primary cells[7]. The procedure of reversible immortalization was devised by retrovirus-mediated transfer of an oncogene that can be subsequently effectively excised by site-specific recombination[8].

A series of cells can be immortalized by retrovirus-mediated transfer of an immortalizing oncogene (SV40T)[9]. Although the hepatocytes can be transduced with retroviral vectors, the efficiency of transduction is significantly low[10]. In the process to successfully and effectively transduce retroviral vectors into hepatocytes, establishing an efficient technique of cell isolation seems to be meaningful.

A mini-pig weighing 13 kg was used in the present study. All procedures performed on the pig were approved by Tongji Medical College Animal Care and Use Committee and were within the guidelines for laboratory animals.

Porcine hepatocytes were isolated from a surgically resected liver segment with a modified four-step retrograde perfusion technique using dispase and collagenase (Figure 1). Briefly, the resected liver sample (47 g) was cannulated with a suitable pipette into the visible blood vessel on the cut surface (Figure 2A). Then the sample was flushed with a 500 mL calcium-free buffer solution (Step 1), 500 mL EDTA in buffer solution (Step 2) and another 500 mL of buffer solution at 37°C. Continuous recirculating perfusion was then carried out on the tissue using a pre-warmed digestion buffer solution (8.4 g/L dispase II and 0.5 g/L collagenase IV, Sigma, St. Louis, MO, USA) at 37°C (Step 3). When digestion of the parenchyma was visualized, the liver tissue was finally flushed with 500 mL buffer solution (Step 4). Following sufficient digestion, the liver capsule was mechanically disrupted and the emerging cell suspension filtered through 250 μm nylon mesh and centrifuged (50 g, 2 min, 4°C). After that we employed a cell incubation step of 10 min using DNase1 (Sigma, St. Louis, MO, USA) containing buffer solution, during which cell clumps were broken up and damaged cells digested. Then, the resulting suspension was filtered through 75 μm nylon mesh, and the cells were harvested by low speed centrifugation at 50 g for 75 s. This was followed by washes using cold buffer solution and filtration through 75 μm nylon mesh and another centrifugation step (50 g, 75 s, 4°C). The resulting cell clumps were finally resuspended in culture medium (William’s medium E, supplemented with 100 mU/mL penicillin, 100 μg/mL streptomycin and 10% fetal bovine serum). Hepatocyte yield and viability was determined using the standard trypan blue exclusion technique. Freshly isolated hepatocytes were seeded at a concentration of 4 × 105 per milliliter in culture flasks. The morphology of the cultured hepatocytes was assessed with a Nikon Diaphot inverted microscope at a magnification of 100 ×. 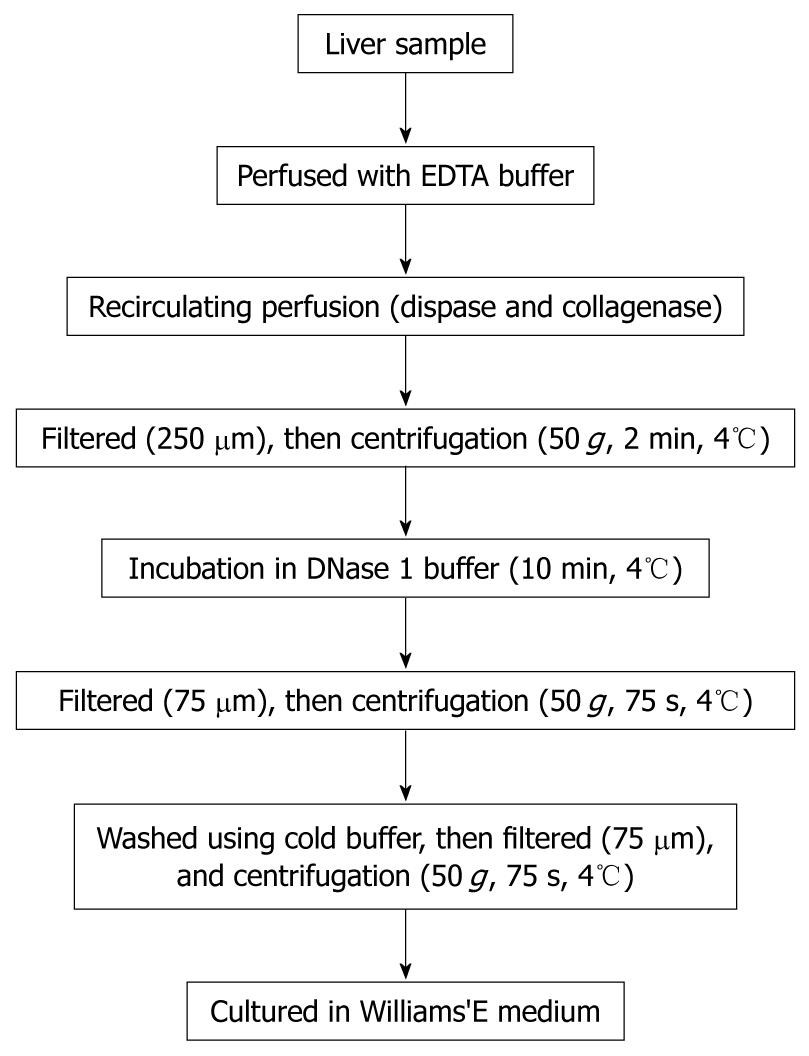 Figure 1 Flow diagram of the preparation of isolated hepatocytes with a modified four-step retrograde perfusion technique.

The retroviral vector SSR#69 (kindly given by Naoya Kobayashi, Okayama University) containing SV40 large TAG and a gene resistant to hygromycin (Figure 3) was cultured in DMEM medium (Sigma, St. Louis, MO, USA) supplemented with 10% newborn calf serum. Freshly isolated primary porcine hepatocytes were transduced with 2 mL of SSR#69 cells supernatant per T25 flask at 37°C for 12 h each day for 5 d. Two days after the final transduction, selection was applied with 100 μg/mL hygromycin. After two weeks hygromycin selection, colonies of transduced hepatocytes emerged. One of the colonies displayed morphological characteristics of the primary hepatocytes, TJPH-1, and was isolated by cloning rings and expanded in culture. Finally, SV40T cDNA in the expanded cells was excised by Cre/loxP site-specific recombination.

Figure 3 Schematic drawings of the integrating component of retroviral vector SSR#69 before and after Cre-recombination. SSR#69 contains the hygromycin B resistance gene (Hyg R) as a positive selectable marker and the herpes simplex virus thymidine kinase gene (HSV-TK) as a negative selectable marker. The SV40T, Hyg R and HSV-TK genes are flanked by loxP sites.
Immunofluorescent analysis of SV40T antigen (SV40Tag) in immortalized cells

Successful porcine hepatocytes isolation resulted in a cell yield of 1.05 × 107 cells/g liver. The viability of hepatocytes immediately after isolation, using the trypan blue exclusion technique, was 97%. The primary hepatocytes attached to the plates showed typical morphological appearance with a polygonal shape, granular cytoplasm and one or more nuclei (Figure 2B).

After transfection of porcine hepatocytes with SV40T, several clones (Figure 2C) grew steadily in the culture medium within 2 wk after 100 μg/mL hygromycin selection. One of the surviving cell colonies, TJPH-1, isolated by cloning rings displayed morphological characteristics of primary hepatocytes featuring a large round nucleus with a few nucleoli and multiple granules in the cytoplasm. After treatment with Cre recombinase, the expanded TJPH-1 cells reverted to their pre-immortalized state. The reverted cells lost expression of SV40T (Figure 4), resulting in loss of proliferation. 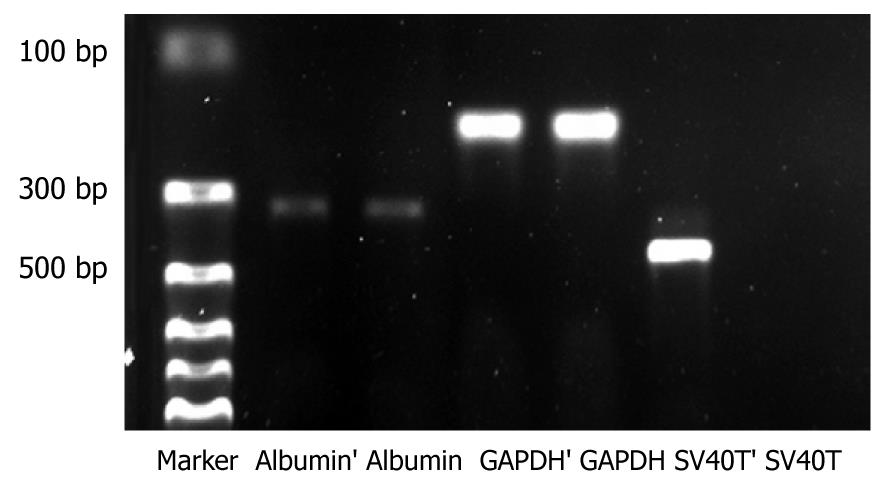 The SV40Tag was examined by immunofluorescent staining in the nuclei of all immortalized cells, as shown in Figure 5A. Immortalized and reverted cells expressed the albumin gene shown by RT-PCR, similar to normal porcine hepatocytes (Figure 4). 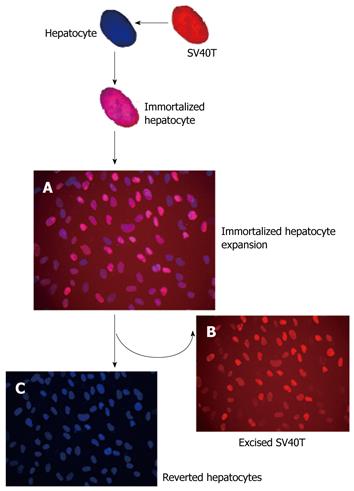 Figure 5 Scheme of reversible immortalization. The primary porcine hepatocytes were immortalized by transfer of an oncogene (SV40T). After expansion of the immortalized cells, Cre/loxP recombination was performed to remove the oncogene (SV40T) and the cells reverted to their pre-immortalized state. (A-C) Double immunofluorescence of immortalized hepatocytes stained with DAPI (blue), which binds, together with monoclonal antibody anti-SV40T revealed with texas red-antibody conjugate (red). Blue and red fluorescence merged as purple. SV40T expression is revealed by intense staining of the cell nucleus.
DISCUSSION

Cultured primary porcine hepatocytes provide a valuable tool for various research strategies and clinical applications, such as studying the regulation of cell growth and of certain differentiated hepatocyte functions and BAL (bio-artificial liver) systems[11,12]. However, the utility of cultured hepatocytes is hampered by difficulties in obtaining populations of primary cells which cannot be expanded in vitro. Thus, other alternative sources of hepatocytes have to be explored[13]. Hepatocytes immortalized with a SV40Tag can make unlimited supplies of cells feasible. However, the continued presence of a SV40Tag in the immortalized hepatocytes would expose patients to an unacceptable tumorigenic risk. To surmount this hurdle, we herein established reversible immortalized porcine hepatocytes to intentionally control population expansion (Figure 5). Use of the Cre/LoxP-based reversible immortalization strategy represents an important step in the development of a potentially novel strategy for resolving the current limits of primary hepatocytes[2]. Different from a general gene transfer strategy, the novel strategy of reversible immortalization allows temporary expansion of cell populations by transfer of an oncogene which can be subsequently excised by site-specific recombination. Several studies have confirmed the utility, safety and efficiency of the reversible immortalization procedure[14]. This novel procedure has extended to several cell types, such as liver endothelial cells[15], hepatic stellate cells[16] and rat hepatocytes[17]. The present study expands the work to primary porcine hepatocytes.

Although porcine hepatocytes can be immortalized by retrovirus-mediated transfer of SV40T, the efficiency of transduction was significantly low[10]. A major challenge of successful transduction is represented by the availability of a sufficient amount of hepatocytes with high post-isolation viability. Thus, in the process to successfully and effectively transduce retroviral vectors into primary hepatocytes, establishing an efficient cell isolation technique would be meaningful.

Hepatocyte isolation started in the mid-1960s, when rat hepatocytes were isolated using a combined mechanical/enzymatic digestion technique[18]. It was not until 1976, when Seglen[19] introduced the two-step collagenase perfusion technique, that high-yield preparation of isolated intact hepatocytes was available. After that, different innovative techniques have been introduced to further improve isolation results[20,21]. In this study, we established a modified four-step collagenase retrograde perfusion technique. The modified four-step method of hepatocyte isolation, compared to the traditional two-step method, can result in an improvement in cell viability and yield[22]. After cell isolation, we employed an incubation step of 10 min using DNase 1, during which cell clumps were broken up and damaged cells digested. This method resulted in a hepatocyte yield of 1.05 × 107 cells/g liver. The viability of the cells, using the trypan blue exclusion technique, was 97%.

In summary, we propose that the modified four-step technique would improve research results, allowing large-scale production of hepatocytes of high quality. Furthermore, the present study expanded the novel strategy of reversible immortalization to primary porcine hepatocytes. By permitting temporary and controlled expansion of hepatocyte populations, the reversible immortalized cells may therefore be used for various research strategies and clinical applications.

The limited lifespan of porcine hepatocytes is a major hurdle to their use. Furthermore, the functional activities of primary porcine hepatocytes decline rapidly after several days in culture. An attractive alternative source of liver cells would be reversible immortalized cells that could make unlimited supplies of cells feasible which would exhibit the characteristics of differentiated hepatocytes. Toward this goal, the authors have focused on reversible immortalization by using Cre/loxP site-specific recombination.

The modified four-step retrograde perfusion technique would improve research results, allowing large-scale production of hepatocytes of high quality. Furthermore, the present study expanded the novel strategy of reversible immortalization to primary porcine hepatocytes. This reversible immortalized cell line could provide an unlimited supply of cells for research and clinical use.

This manuscript appears to be about two separate, but related topics of hepatocyte isolation and “reversible immortalization”. In my opinion, by combining the two topics, it weakens the manuscript. It appears they were able to reproduce techniques described by others, which is good.