We report a case of a 56-year-old woman with intrahepatic biliary cystadenoma (IBC) accompanying a tumor embolus in the extrahepatic bile duct, who was admitted to our department on October 13, 2008. Imaging showed an asymmetry dilation of the biliary tree, different bile signals in the biliary tree, a multiloculated lesion and an extrahepatic bile duct lesion with internal septation. A regular left hemihepatectomy en bloc was performed with resection of the entire tumor, during which a tumor embolus protruding into the extrahepatic bile duct and originating from biliary duct of segment 4 was revealed. Microscopically, the multiloculated tumor was confirmed to be a biliary cystadenoma with an epithelial lining composed of biliary-type cuboidal cells and surrounded by an ovarian-like stroma. An aggressive en bloc resection was recommended for the multiloculated lesion. Imaging workup, clinicians and surgeons need to be aware of this different presentation.

Intrahepatic biliary cystadenoma (IBC) is a rare benign epithelial tumor characterized by unicystic or multicystic growth, accounting for less than 5% of solitary non-parasitic cysts of biliary origin[1,2]. IBC was first described in 1892 by Keen[3], followed by Edmondson as a multilocular cystic lesion lined by mucus-secreting cuboidal or columnar epithelium accompanying a densely cellular “ovarian-like” stroma[4]. The most common symptoms of IBC patients at presentation are abdominal pain and mass in which 35% have obstructive jaundice[1,5]. Knowledge about the pathogenesis of IBC is limited. IBC manifested as a tumor embolus in the extrahepatic bile duct occurs rarely. In addition, no other case report has yet described its clinicopathological features. We report a case of IBC with a tumor embolus in the extrahepatic bile duct with its clinicopathological features described and its diagnostic approaches and surgical procedures discussed.

A 56-year-old woman with hypertension, diabetes and chronic B hepatitis was transferred to our hospital on October 13, 2008 due to a 2-wk history of right hypochondrial pain and spontaneously remitted jaundice. She denied nausea, vomiting, fever, shoulder or back pain. She was admitted to a local hospital but not received surgical treatment. Before admission, her peak bilirubin level was 434 μmol/L and magnetic resonance cholangiopancreatography (MRCP) demonstrated a multiloculated cystic lesion in segment 4, measuring 5.5 cm in diameter, and an obviously dilated left intra- and extra-hepatic biliary tree (Figure 1) but no evidence of choledocholithiasis. The signal was different between extrahepatic and marginal bile ducts on T2-weighted magnetic resonance images (MRI) showing thin septa in bile duct (Figure 2). The patient had no history of tobacco smoking, alcohol abuse or recent travel or previous surgery. 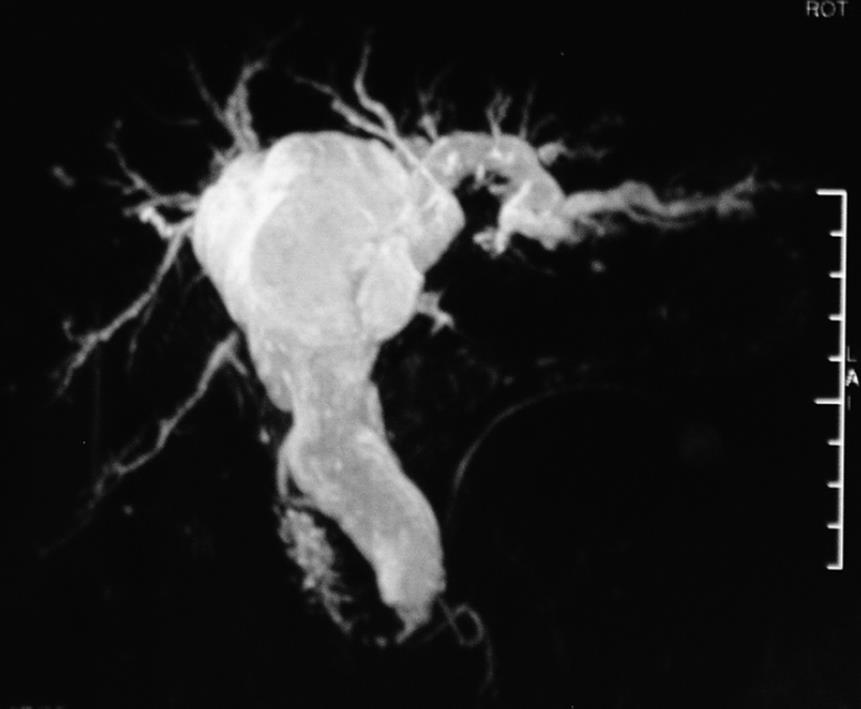 After admission, she demonstrated obstructive jaundice features, her bilirubin level declined spontaneously to 103.8 μmol/L, carbohydrate antigen 19-9 (CA19-9) was elevated to 92.1 μg/L, and carcinoembryonic antigen (CEA) level was normal. Abdominal ultrasound showed a dilated biliary tree and a multilocular cyst in segment 4. The extrahepatic bile duct (1.8 cm in diameter) was filled with fluid-like matters. Prior to a planned left hepatectomy, percutanous transhepatic biliary drainage (PTBD) of the right lobe was performed to decompress the right biliary system with an 8.5F tube. The TB level was 71 μmol/L and 35.8 μmol/L, respectively, before PTBD and hepatectomy. Volumetric computed tomography (CT) scan revealed that the ratio of remnant liver to total liver volume was 63.2%, with no change in cystic tumor size and no dilation of the right bile ducts, and CT scans showed a small septum in the extrahepatic bile duct, thus the cystic tumor was diagnosed as an intrahepatic tumor infiltrating the extrahepatic bile duct.

The patient underwent choledochotomy under general anesthesia on November 5, 2008, during which no palpable mass was found on the liver surface, but a tumor embolus originating from the intrahepatic duct of segment 4 with smooth surface that protruded into the extrahepatic bile duct was observed without mucus-secretion (Figures 3 and 4). Coexistence of a confluence variation in separate posterior right bile ducts and a variation in the replaced right hepatic artery from superior mesenteric artery was observed. A multiloculated cyst in segment 4 adhering to the bile duct wall of the anterior right lobe was found. So a regular left hemihepatectomy en bloc was performed with resection of the entire tumor, segment 5 and the wall of 8 bile ducts. The common hepatic duct was transected to facilitate reconstruction of the orifice wall of the anterior right bile duct, and Roux-en-Y anastomosis between the hilar bile duct and jejunum was performed. Microscopically, the multiloculated tumor infiltrating the left hepatic duct was confirmed to be a biliary cystadenoma with an epithelial lining composed of biliary-type cuboidal cells and surrounded by an ovarian-like stroma (Figure 5). The bile duct margin was negative. The patient had an uneventful postoperative recovery. Follow-up imaging within twelve months showed no signs of local or distant tumor recurrence. 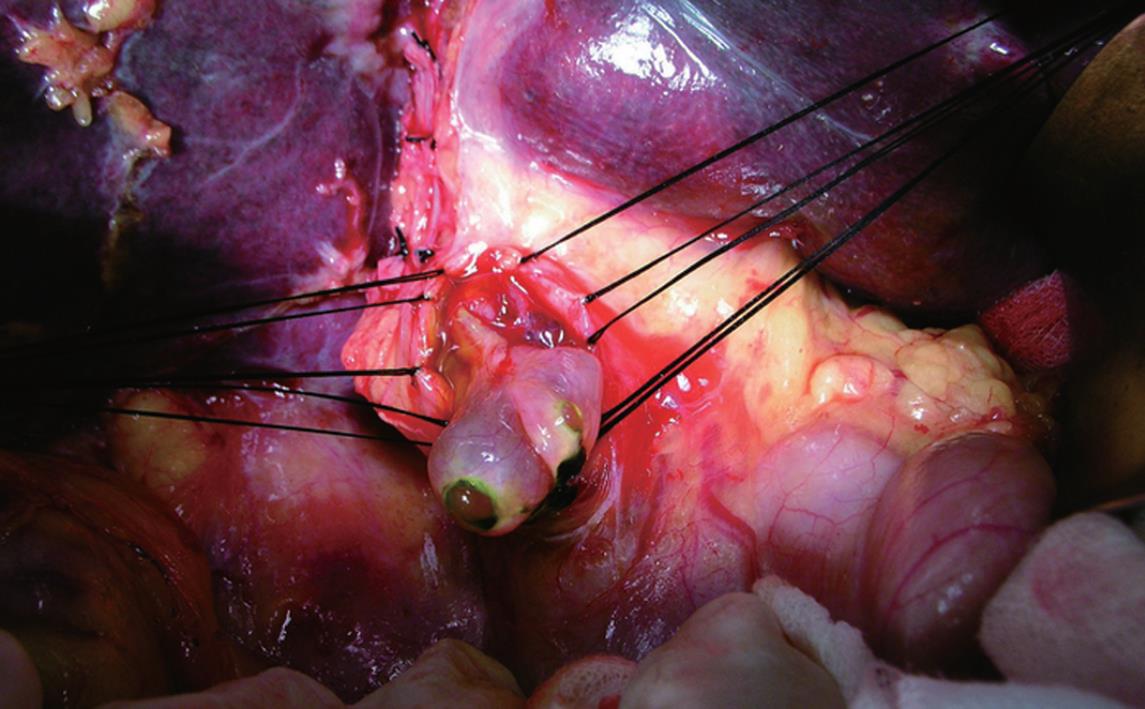 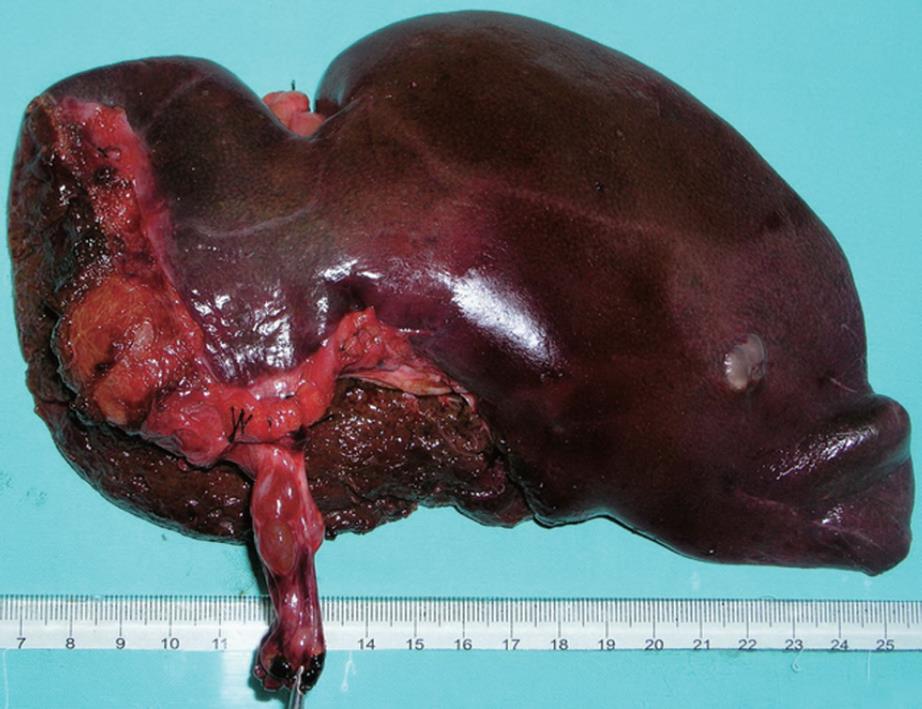 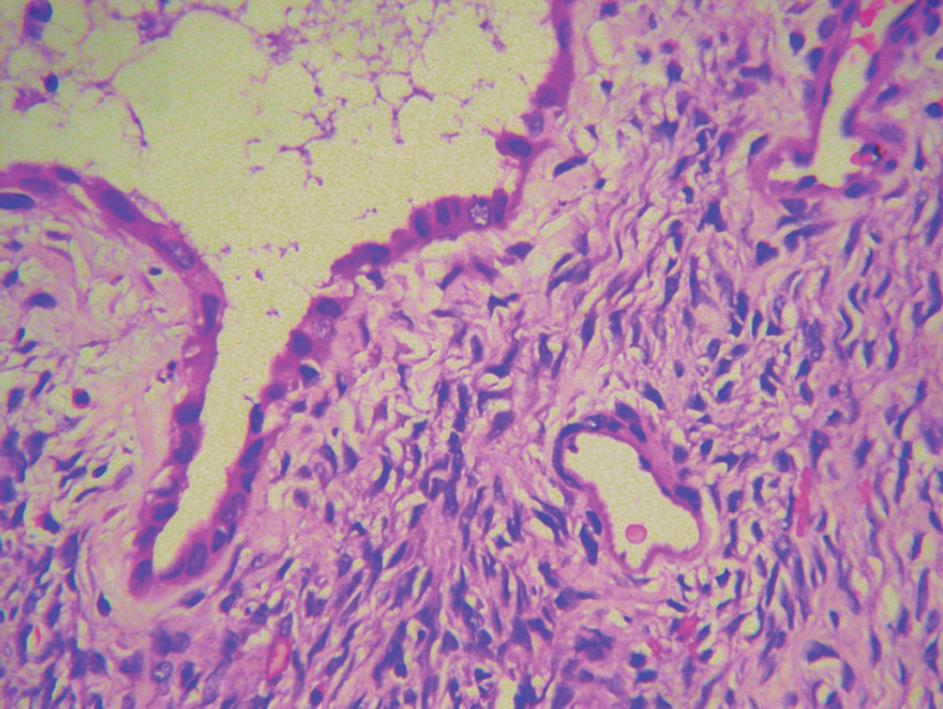 In conclusion, IBC has a special growth manner[9,10,13-15], but its clinical features have not been fully illustrated. Imaging workup, clinicians and surgeons need to be aware of its different presentations, such as recurrent jaundice, different bile signals on MRI, distinctive thin septa in extrahepatic bile duct, and asymmetry dilation of bile ducts. An aggressive complete resection of the lesion is recommended. Large randomized controlled trials are warranted.