Pancreaticobiliary maljunction (PBM) is frequently associated with biliary cancer due to reflux of pancreatic enzymes into the choledochus, and even after surgery to correct the PBM such patients still have a risk of residual bile duct cancer. Here, we report the case of a 59-year-old female with carcinoma of the papilla of Vater which developed 2.5 years after choledochoduodenostomy for PBM. During the postoperative follow-up period, computed tomography obtained 2 years after the first operation demonstrated a tumor in the distal end of the choledochus, although she did not have jaundice and laboratory tests showed no abnormalities caused by the previous operation. As a result, carcinoma of the papilla of Vater was diagnosed at an early stage, followed by surgical cure. For early detection of periampullary cancer in patients undergoing surgery for PBM, careful long-term follow-up is needed.

Pancreaticobiliary maljunction (PBM) is a congenital anomaly defined as a union of the pancreatic and biliary ducts outside the duodenal wall[1]. Due to the loss of control by the sphincter of Oddi, pancreatic enzymes reflux into the choledochus, especially in the C-P type of maljunction, in which the common bile duct joins the main pancreatic duct[1]. Consequently, PBM is frequently associated with choledochal cyst and sometimes biliary cancer; a large survey showed that the rate of developing biliary cancer was 10.6% and 37.9% in PBM with and without choledochal dilation, respectively[2].

In this paper, we report a case of carcinoma of the papilla of Vater that developed following treatment of PBM with choledochal dilation by choledochoduodenostomy. This is the first report of such a case, and particular attention is paid to the incidence, differential diagnosis, and treatment of periampullary neoplasms after treatment for PBM.

A 59-year-old female was referred to our hospital. She had undergone choledochoduodenostomy and cholecystectomy at another hospital 2.5 years earlier after diagnosis of PBM. Although imaging modalities obtained before surgery showed choledochal dilation, the minimally invasive operation was performed without excision of a choledochal cyst because the patient rejected blood transfusion preoperatively (Figure 1A). During the postoperative follow-up period, magnetic resonance choledochopancreatography demonstrated a tumor in the main pancreatic duct and in the anastomotic site of the choledochus and duodenum from the first operation (Figure 1B). Computed tomography also showed a tumor in the distal end of the residual choledochus, which had not been observed before the first operation despite bile diversion (Figure 1C and D). Endoscopic retrograde pancreatography was then performed, and a 2-cm-diameter filling defect was demonstrated at the papilla of Vater, which was shown to be adenocarcinoma on cytology. Regardless of these findings, the patient did not complain of any symptoms such as jaundice or abdominal pain, and laboratory tests, including hepatobiliary enzymes and tumor markers, showed no abnormalities. With a diagnosis of carcinoma of the papilla of Vater after choledochoduodenostomy for PBM, the patient underwent pancreaticoduodenectomy. Despite moderate adhesions due to the previous operation, we were able to find common hepatic duct which was anastomosed to the duodenum (Figure 2). After Kocher maneuver, residual extrapancreatic choledochus was easily identified behind the anastomotic region and all the residual choledochus could be removed. Because the cancerous lesion was not found at the first operation or at preoperative examination, resection of all the residual bile duct was thought to be sufficient for curative surgery. On pathology of the resected specimen, the tumor was found to be well-to-moderately differentiated adenocarcinoma of the papilla of Vater, with metastasis to the lymph nodes behind the head of the pancreas (Figure 3). The patient’s postoperative course was uneventful, and there has been no cancer recurrence 1 year after the second surgery. 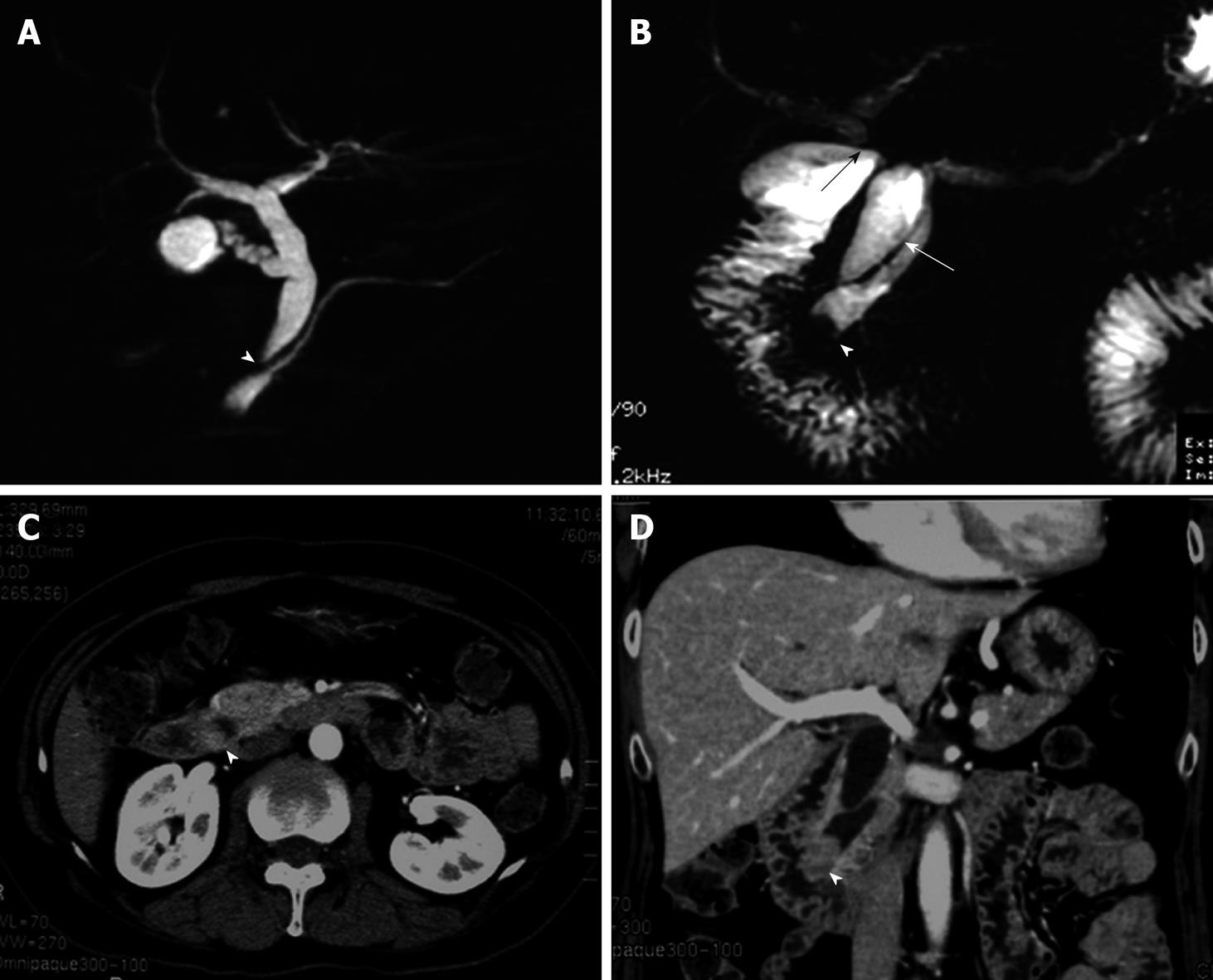 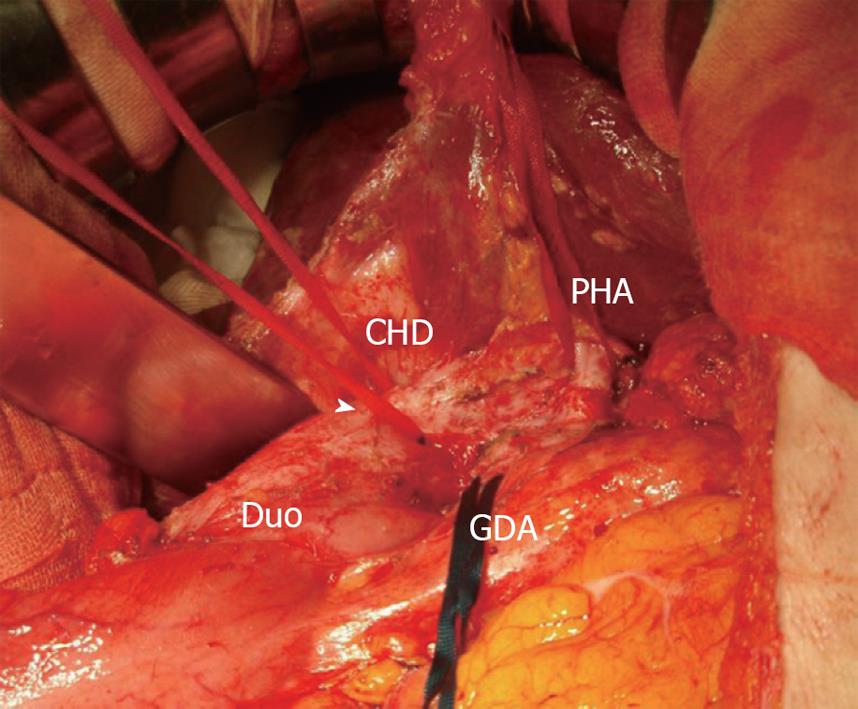 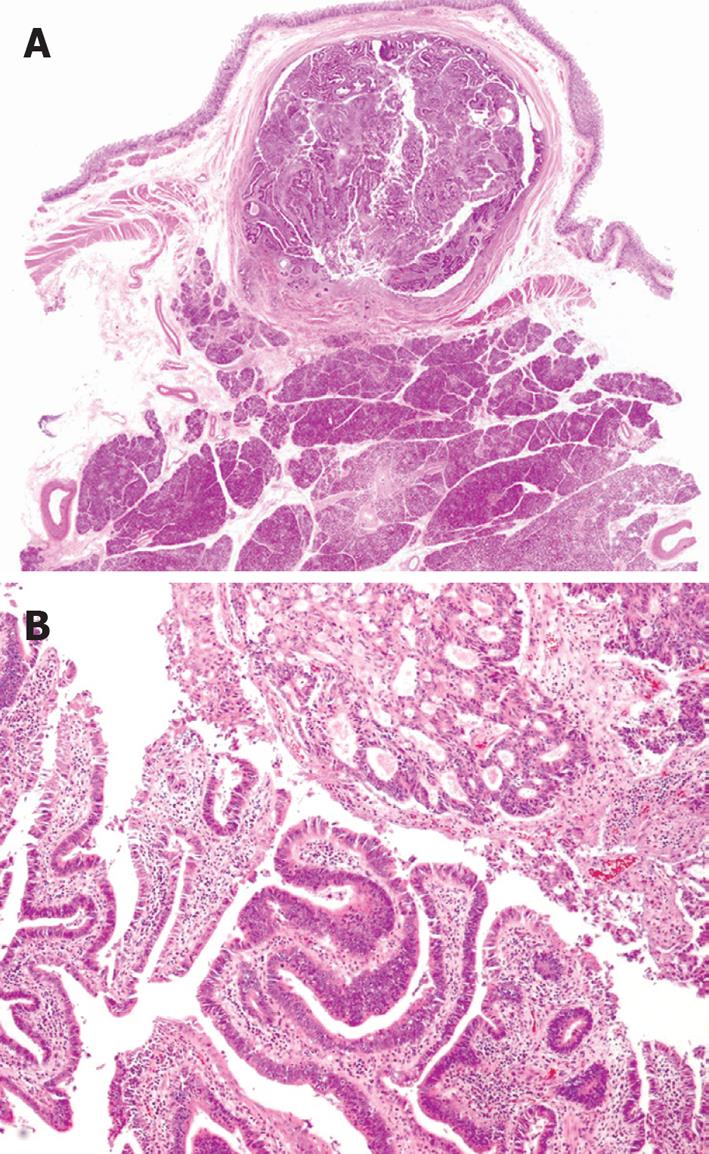 Even after surgery that stops reflux of pancreatic enzymes into the choledochus and prevents the development of biliary cancer, patients with PBM still have a risk of developing residual bile duct carcinoma, both in the proximal duct and the distal end[6]. In the present case, carcinoma of the papilla of Vater was diagnosed 2 years after choledochoduodenostomy by computed tomography. In addition to complete excision of a choledochal cyst, careful long-term follow-up is necessary; the interval between excision of a choledochal cyst and cancer detection ranges from 1 to 19 years in several reports[6].

In summary, a case of carcinoma of the papilla of Vater that developed after choledochoduodenostomy for PBM was reported. In this present case, the lesion was detected at an early stage, and curative resection was performed, suggesting that careful, long-term follow-up of patients following surgery to treat PBM is necessary.