Meckel’s diverticulum is the most common congenital anomaly of the gastrointestinal tract[1-4]. It is an outpouching of the distal ileum located at the antimesenteric border usually within 45-60 cm of the ileocecal valve[4]. The majority of Meckel’s diverticulum cases are asymptomatic although they can, occasionally, cause complications such as bleeding, intestinal obstruction and/or inflammatory process[1-4]. The presentation as an abscess in the abdominal wall is a rare clinical entity. Because of insidious onset and subtle clinical signs of the resulting abscess, the diagnosis of such cases is often delayed. Meckel’s diverticula such as those forming extensive abscesses may sometimes become complicated and require a prolonged treatment period. These complications should be kept in mind in order to avoid further sequelae. The diagnosis is difficult and is usually performed at surgery[2]. We here report a patient who developed a fistula between an inflamed Meckel’s diverticulum and subcutaneous tissue, which is the first case in the literature.

A 32-year-old woman with no previous abdominal surgery presented with a 48-h history of right abdominal pain, fever, nausea, vomiting and a palpable mass. There was no significant medical history. Examination of the abdomen showed a marked distension without peritonitis and a mass 8 cm × 5 cm in size. There were significant inflammatory signs such as local heat, swelling, edema and tenderness involving the entire right abdominal wall. Her body temperature was 38.5°C. Laboratory findings showed a white blood cell count of 28 000, hemoglobin value of 115 gm/L, and a platelet count of 250 000. The other laboratory investigations, including electrolytes and urinalysis, were within normal limits. Chest and abdominal X-ray revealed no abnormality. An abdominal ultrasound scan suggested a fluid collection in the right lower abdominal quadrant, which was evaluated to be an abscess. The magnatic resonance imaging (MRI) finding indicated a mass with a suspicious intraabdominal connection (Figure 1). The clinical, radiological and laboratory findings revealed the presence of a right lower abdominal quadrant abscess as the source of sepsis. The abdomen was opened immediately and the exploration revealed a Meckel’s diverticulum with a connection to the right lower quadrant mass (Figure 2A-C). There was not any fluid contamination in the abdomen. A resection of the necrotic segment, Meckel’s diverticulum and a functional end-to-end anastomosis of the bowel were completed. Afterwards, debridement of the non-viable abdominal wall muscle groups and drainage of the abscess cavity were performed (Figure 2D). The bacterial culture revealed Escherichia coli and Klebsiella pneumoniae infection. The diverticulum was confirmed as Meckel’s diverticulum by histological examination (Figure 3). The patient recovered without incident and was discharged after five days in hospital. 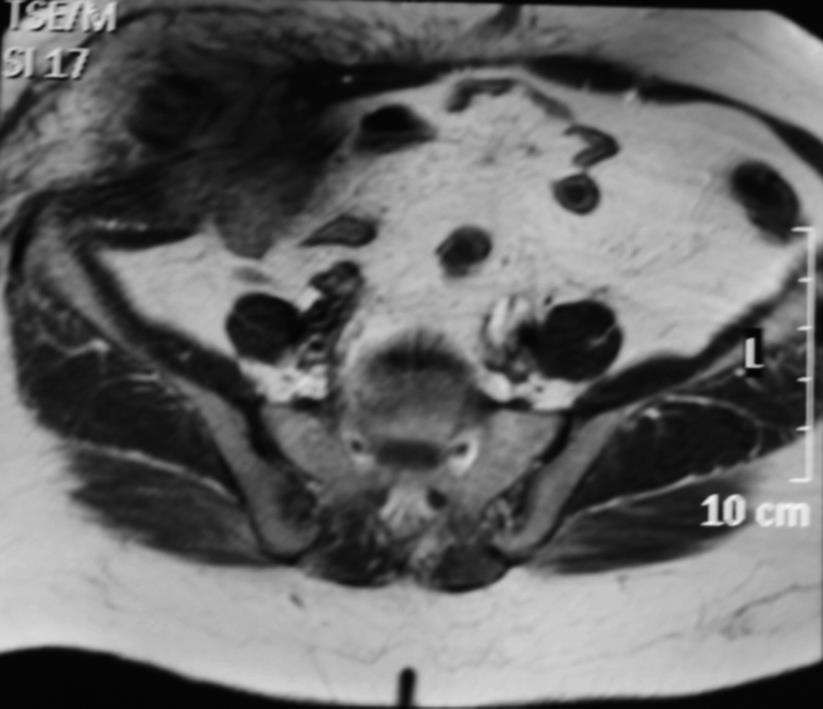 Meckel’s diverticulum is the most common end result of the spectrum of omphalomesenteric duct anomalies, which also include umbilical-ileal fistula, omphalomesenteric duct sinus, omphalomesenteric duct cyst, fibrous connection of the ileum to the umbilicus, and Meckel’s diverticulum[1,2,5]. The lifetime risk of complications is estimated to be about 4%; 40% of which occur in children[1]. The presentation in children is most commonly with gastrointestinal bleeding from ectopic gastric or pancreatic mucosa, whereas adults more commonly develop obstruction, intussusception, ulceration, vesicodiverticular fistula, or tumor[1-6]. Regarding our case, we confronted a rare presentation of Meckel’s diverticulum, which first emerged as enterocutaneous fistula. The etiopathogenesis of the disease can be explained by the direct contamination of the right anterior abdominal wall by an inflamed Meckel’s diverticulum. The spread of resultant sepsis along the abdominal wall muscles, preperitoneal space and downward behind the inguinal ligament into the thigh, thus presented clinically as an abscess. A review of the literature suggests certain intra-abdominal inflammatory pathologies in the etiology of enterocutaneous fistula, such as diverticulitis, acute appendicitis, Crohn’s disease, colorectal carcinoma, rectal trauma and primary staphylococcal abscess[7,8]. Therefore, we should define our case as a new reason for enterocutaneous fistula (Table 1). In the literature another interesting complication of Meckel’s diverticulum has been described by Graziotti et al[9] They presented a case where an ingested foreign body (chicken bone) entrapped in a Meckel’s diverticulum eventually caused a vesicoenteric fistula.

Much rarer complications of Meckel’s diverticula include neoplasms, with the most common being benign tumors reported as leiomyomas, angiomas and lipomas. Malignant neoplasms reported include adenocarcinomas, which commonly originate from the gastric mucosa, sarcoma, and carcinoid tumor[10].

Clinical diagnosis of Meckel’s diverticulum is rarely possible; less than 10% are diagnosed preoperatively[1,2]. It is therefore critical for surgeons to rule out Meckel’s diverticulum in patients undergoing surgical evaluation for chronic abdominopelvic pain[5]. The correct diagnosis of Meckel’s diverticulum before surgery is often difficult because a complicated form of this condition is similar to many other abdominal pathologies[1-5]. Arteriography and technetium pertechnetate scanning may be especially useful when there is significant bleeding or ectopic gastric mucosa[5]. In children, the single most accurate diagnostic test for Meckel’s diverticula is scintigraphy with sodium 99mTc-pertechnetate. The diagnostic sensitivity of this scan has been reported to be as high as 85%, with a specificity of 95% and an accuracy of 90% in the pediatric age group. In adults, however, 99mTc-pertechnetate scanning is less accurate because of reduced prevalence of ectopic gastric mucosa within the diverticulum[10]. However, these scans are not readily amenable in an emergency situation. Contrast-enhanced CT scan may be helpful in patients with enigmatic clinical symptoms of enterocutaneous fistula caused by Meckel’s diverticulum. In vesicoenteric fistulas, cystoscopy has a key role in visualization of the fistula[6].

Briefly, the lesson from this case is that Meckel’s diverticulum should be kept in mind as one of the differential diagnoses of enterocutaneous fistula.