Spontaneous intrahepatic hemorrhage and liver rupture usually occur in patients with underlying hepatocellular carcinoma or adenoma[1,2]. This has also been described in patients with HELLP syndrome, Ehlers Danlos disease and graft-vs-host disease[3-6]. In this report, we described a rare case of spontaneous liver rupture in a patient with hypereosinophilic syndrome (HES), of which the diagnosis was delayed, resulting in a fatal outcome.

A 48-year-old man with good past health was admitted because of fever associated with flu-like symptoms and left loin pain for a few days. Initial physical examination showed mild suprapubic and left loin tenderness, and urine dipsticks revealed microscopic haematuria. The chest radiograph was normal and initial blood tests showed eosinophilia and mildly deranged liver function (Table 1). The patient had no clinical signs of allergic reaction. Ultrasound examination of the abdomen revealed no abnormality in the hepatobiliary and urinary system. Urine microscopy showed microscopic haematuria. Ova or parasites were not detected in stool samples. The cultures from blood, sputum and urine were all negative.

Five days after admission, while awaiting further investigations, the patient suddenly developed hypovolemic shock. He rapidly deteriorated to pulseless electrical activity. Cardiopulmonary resuscitation was initiated immediately. He was pale and his abdomen was distended. His pulse returned after resuscitation with 2 L gelofusine. His hemoglobin level dropped from 14.5 to 5 g/dL. In addition, ultrasound examination of the abdomen confirmed the presence of free intraperitoneal fluid. The patient was given six units of unmatched blood during resuscitation. Owing to the unstable hemodynamic state and the diagnosis of exsanguinating intra-abdominal pathology, emergency laparotomy was arranged.

On laparotomy, 4 L of blood in the peritoneal cavity and a 10 cm ruptured subcapsular haematoma at anterior sector of right lobe with capsular tear were found. Active bleeding was found at a 9 cm laceration of 5 cm deep at segment VI/VII of the liver (Figure 1A). The liver was not cirrhotic with no palpable space occupying lesion. No abnormality and retroperitoneal haematoma were detected in other intra-abdominal organs. Hemostasis was attempted by suturing the liver laceration and packing. Bleeding from the raw surface was coagulated with a TissueLink device (TissueLink Medical Inc, Dover, U.S.). However, the patient developed coagulopathy with diffuse oozing after massive transfusion with blood products (10 units of platelet concentrates, 16 units of fresh frozen plasma, and 16 units of pack cells). He required high dose trabecular support during operation. Perihepatic packing was performed and the abdomen was closed. He finally succumbed 1 h after the operation at the intensive care unit. 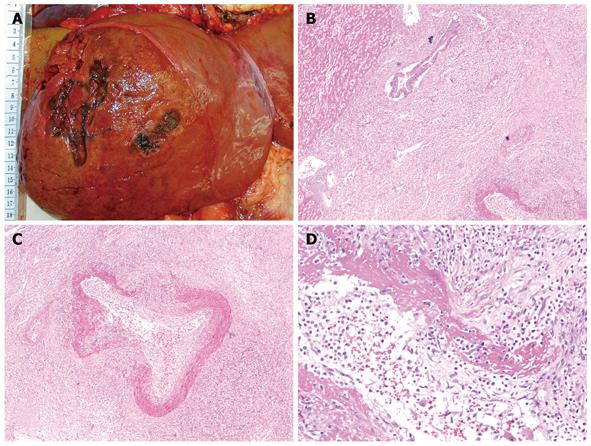 Eosinophilia, defined as an increased eosinophil count in peripheral blood and accumulation in various tissues[7], can be caused by atopic disease, hypersensitivity reaction, parasitic infection, vasculitis and hematological disorders. It is also found in uncommon conditions, such as eosinophilic gastrointestinal disease, Churg-Strauss syndrome and HES[8]. The diagnostic criteria for HES, first described by Chusid et al[9] in 1975, include persistent peripheral blood esosinophilia for more than 6 mo with an absolute eosinophil count greater than 1500 cells/μL, the presence of organ involvement by eosinophilic infiltration, and exclusion of secondary causes of eosinophilia[8].

The common organ systems involved in HES are hematologic (100%), cardiovascular (58%), cutaneous (56%), neurologic (54%) and pulmonary (49%) systems[8]. Liver and gastrointestinal tract are involved in only 20%-30% of patients. Patients with hepatic involvement may develop chronic active hepatitis-like picture and some may suffer from Budd-Chiari syndrome secondary to strictures in inferior vena cava or hepatic veins as a result of eosinophilic infiltration[10]. Spontaneous rupture of bladder and esophagus due to eosinophilic infiltration has been reported in the literature[11,12]. To our knowledge, this is the first case report of spontaneous liver rupture in HES.

Patients with HES usually present with vague symptoms[8], making its diagnosis difficult and delayed. In our case, the patient presented with fever and flu-like symptoms, which were not specific of any disease. Although his liver function was mildly deranged, the normal initial sonographic appearance of the hepatobiliary system gave further misleading reassurance to the clinicians in identifying the hepatic involvement. Without a high index of suspicion, it was difficult to diagnose HES early and to start treatment before the catastrophic event in our case, namely liver rupture and subsequent mortality.

In order to avoid end organ damage by HES, it is important to establish the diagnosis and start treatment accordingly. Secondary causes of eosionphilia, such as atopic disease, hypersensitivity reaction or parasitic infestation, should be excluded. For patients with deranged liver function, non-invasive investigations including ultrasound of the liver and biliary system and hepatitis serology should be performed to exclude common disorders of the hepatobiliary system. In patients suspicious of HES with hepatic involvement, liver biopsy can be performed to demonstrate eosinophilic infiltration of the liver[13,14]. After the diagnosis of HES is confirmed, specific tests on Fip1-like-1 and platelet-derived growth factor receptor α (FIP1L1-PDGFRA) fusion gene mutation can guide further treatment using targeted therapy[8].

Successful treatment using corticosteroids has been reported in patients with hepatic HES[13,14]. Studies also showed that patients with HES have a good response to targeted therapy according to the result of FIP1L1-PDGFRA[15,16]. HES patients showing positive FIP1L1-PDGFRA have a good response to imatinib mesylate, resulting in a normal eosinophil count[15]. For patients with negative FIP1L1-PDGFRA, mepolizumab (an anti-interleukin 5 antibody) can effectively stabilize the eosinophil count and reduce the daily steroid dose to less than approximately 7.5 mg prednisolone[16].

The present case of liver rupture was likely caused by eosinophilic infiltration and fibrinoid necrosis of the vascular wall, leading to rupture of hepatic arteries as demonstrated in Figure 1B-D. Although reports are available on cardiopulmonary resuscitation (CPR)-related major liver injury[16], this was unlikely in our case because the event of deterioration occurred abruptly before the initiation of CPR. The right posterolateral located liver laceration in the absence of ribs fractures further made traumatic cause of the liver rupture unlikely. CPR-related liver trauma usually occurs in the left lobe where it is anatomically close to the point of chest compression[17].

Management and prognosis of spontaneous liver rupture heavily depend on its severity and the hemodynamic stability of patients. For stable patients, non-operative management with transfusion or transarterial selective embolization of the feeding artery has been described with promising results[1,4]. For patients with hemodynamic instability or failure in non-operative treatments, surgery for haemostasis is recommended as in our case. Hemostasis can be achieved by temporary tamponade of the liver using packs and portal triad occlusion (Pringle manoeuvre)[18]. After initial operative resuscitation and identification of the site of bleeding, different surgical techniques, including direct suture ligation, hepatic resection, selective hepatic artery ligation and perihepatic packing, can be employed for hemostasis depending on the case scenario[17]. Despite all these methods, if patients develop coagulopathy, acidosis and multi-organ failure, the chance of survival is low.

Although the clinical course of HES is highly variable and dependent on the degree of organ involvement, early diagnosis and initiation of treatment are of paramount importance. Delay in diagnosis may lead to catastrophic complications. A high index of suspicion is crucial in the management of patients with eosinophilia.