In this case report we describe the relationship between ferritin levels and hepcidin in a patient with alcohol-related spur cell anemia who underwent liver transplantation. We demonstrate a reciprocal relationship between serum or urinary hepcidin and serum ferritin, which indicates that inadequate hepcidin production by the diseased liver is associated with elevated serum ferritin. The ferritin level falls with increasing hepcidin production after transplantation. Neither inflammatory indices (IL6) nor erythropoietin appear to be related to hepcidin expression in this case. We suggest that inappropriately low hepcidin production by the cirrhotic liver may contribute substantially to elevated tissue iron stores in cirrhosis and speculate that hepcidin replacement in these patients may be of therapeutic benefit in the future.

Hepatic iron overload in alcohol related cirrhosis and the detrimental effect of excessive iron on hepatic tissues in this condition is well described[1]. Previous studies investigating whole-body retention of iron showed a two-fold increase in intestinal iron absorption in chronic alcoholism, and the underlying mechanism has not been identified[2].

Hepcidin, a 25 amino acid peptide, is the recently described body iron storage regulator. Under physiological conditions, hepcidin expression is stimulated by stored tissue iron, inflammatory stimuli and repressed by anemia and tissue hypoxia[3]. Recently, interactions between various signals affecting hepcidin production by hepatocytes have been elucidated[4]. Hepcidin binds to the iron exporter protein ferroportin on the basolateral aspect of macrophages and enterocytes and causes internalization and degradation of this molecule[5], rendering cells iron-loaded. The two major systemic effects of elevated hepcidin production are therefore reduction of intestinal iron uptake and reticulo-endothelial sequestration of iron.

As the erythron is the main user of iron, its requirement for red cell production is paramount. In the presence of anemia due to ineffective erythropoiesis, animal experiments have shown that an unidentified signal from bone marrow seems able to override the stimulus of elevated body iron stores, repressing hepcidin and allowing duodenal iron absorption to continue even in the presence of elevated iron stores[6].

Spur cell anemia (SCA) is an interesting clinical condition in which both erythropoiesis and tissue iron stores are altered by excessive alcohol consumption such that sufferers develop severe tissue iron overload and ongoing hemolysis[7]. The hemolysis is due to structural abnormalities of red cell membranes, resulting in spiculated erythrocytes (acanthocytes) which undergo early splenic destruction[8]. Treatment of SCA has been disappointing and it is commonly viewed as an indicator of end-stage liver disease[9].

We postulate that reduced hepcidin production in the cirrhotic liver might be a significant factor contributing to the body iron excess in this patient with end stage alcohol-induced cirrhosis and SCA who underwent orthotopic liver transplantation (OLT).

The patient was a 55-year old female with a 10-year history of excessive alcohol consumption who, following hospitalization due to decompensation and alcoholic hepatitis, became abstinent in May 2005. She remained stable until March 2006 when she developed worsening jaundice. Hematological findings indicated that hemolysis was a significant contributory factor in the patient’s jaundice. Subsequent investigations confirmed the diagnosis of SCA in the context of cirrhosis. She was referred for transplantion assessment in November 2006. She had an unconjugated hyperbilirubinaemia (230 U/L) and raised reticulocyte count (125 × 109/L). Hepatic synthetic function was relatively preserved with an INR of 1.5 and serum albumin concentration of 38 g/L. A blood film showed many acanthocytes with polychromasia and spherocytes. A transjugular liver biopsy showed micronodular cirrhosis and grade 1 siderosis. Her serum ferritin level at this time was greatly elevated at 600 ng/mL.

The patient gave consent for blood and urine samples collection for the study (LREC 08/MRE09/2). Samples were taken immediately before and at 12, 36, 48 h and 2 mo after transplantation. Blood was analyzed for ferritin, hemoglobin, erythropoietin, IL-6 and CRP to assess the extent of hemolysis and inflammation. Hepcidin was measured by SELDI-TOF using Cu2+ loaded IMAC ProteinChip Arrays and stable isotope labeled hepcidin as an internal standard as previously described[10] and available viahttp://www.hepcidin.bham.ac.uk/. Urine samples were normalized with respect to protein concentration (20 μg/mL, Bradford assay).

A sample of the explant liver was analyzed for hepcidin mRNA by q-RTPCR and this was compared with samples taken from 8 normal livers.

Figure 1 shows that the rise and subsequent fall in urinary hepcidin following transplantation does not seem to be related to erythropoietin production which remains quite stable (except for one dip at 12 h coincident with a two unit peri-operative blood transfusion). Similarly, IL6 levels did not vary greatly. CRP rose as expected in relation to the operation. This rise was not immediately accompanied with the dramatic rise in hepcidin production which was delayed for 12 h. Figure 2 illustrates a close correlation between urinary and serum hepcidin levels in this patient (Pearson correlation coefficient r = 0.958). 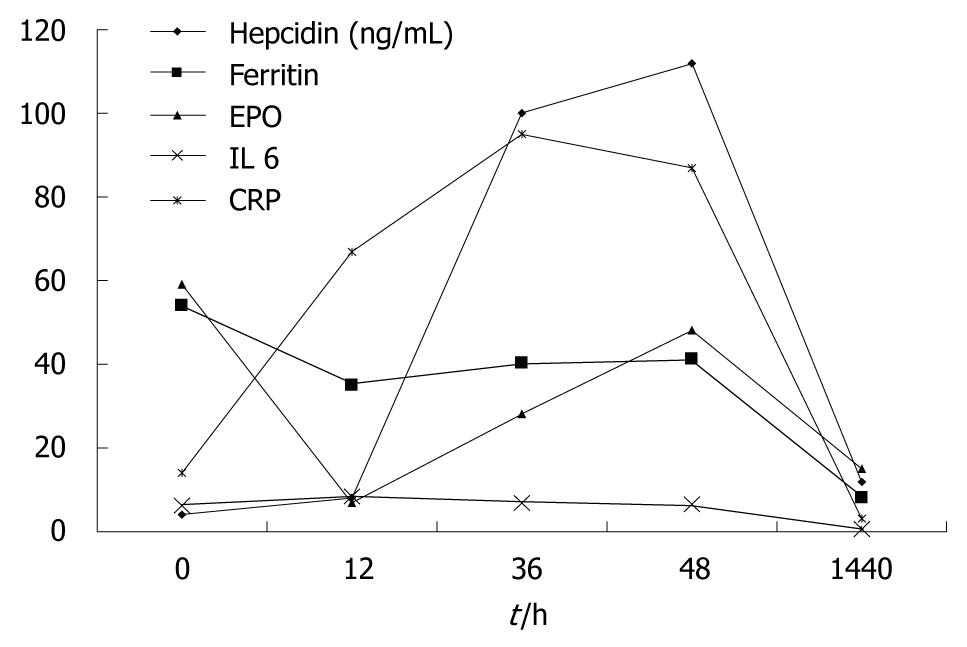 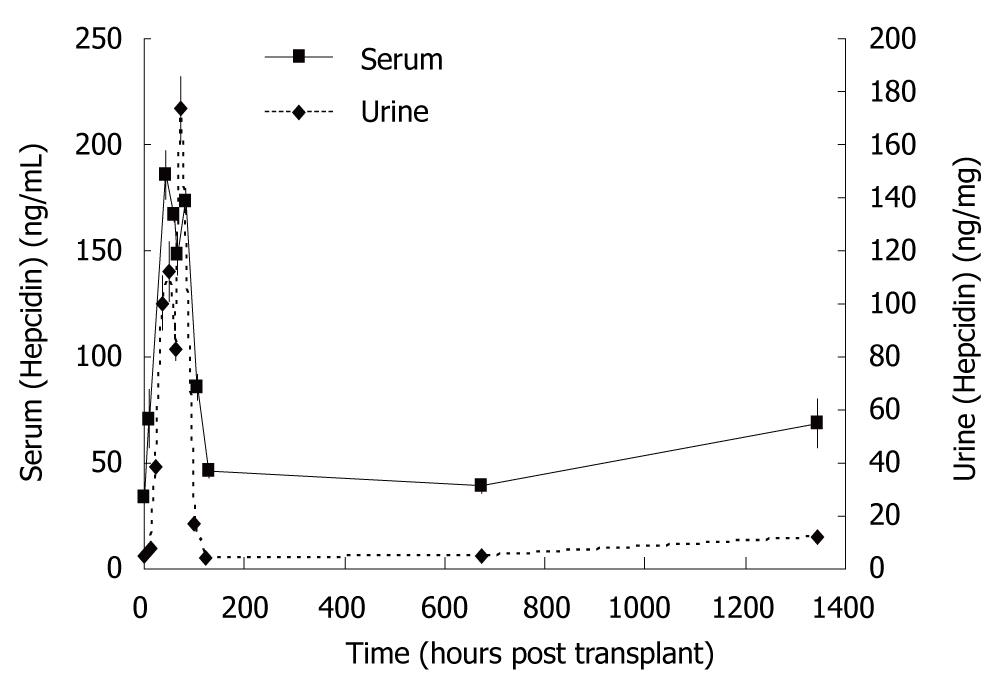 One potential mechanism for pre-operative hepcidin repression would be high circulating erythropoietin level in the hemolyzing patient. Apart from a small reduction in EPO in the peri-operative period which co-incided with a blood transfusion, EPO remained relatively high in the post-operative period consistent with observed persistence of spur cells and the ongoing anemia. This hepcidin expression in the new liver increased progressively. It is likely that hepcidin production in the new liver during the early post-transplantion period remains somewhat muted in relation to the ongoing EPO stimulus.

In our case, although the cirrhosis was undoubtedly alcohol-related, the patient had been abstinent for 2 years. This raises the possibility that, even in the absence of an ongoing stimulus, a persistent hepatic oxidative state, perhaps induced by iron overload, could trigger ongoing repression of hepcidin production. This illustrates potentially differential effects of acute stimulation of hepcidin perhaps via the IL6/STAT pathway and chronic repression mediated by oxidative stress[11].

In summary, the cirrhotic liver in this patient with alcohol-induced spur cell anemia produced very little hepcidin in relation to circulating high ferritin levels and this deficiency was corrected by transplantation.

The mechanisms underlying reduced hepcidin production in this situation, in particular the role of oxidative stress as mediated through CHOP/CEBP, deserve further studies in the setting of human alcohol-related cirrhosis. The influence of alcoholic cirrhosis on duodenal expression of iron transporter proteins and the influence of local effects related to oxidative stress and external factors such as erythropoiesis on human hepcidin production clearly deserve further prospective examinations.